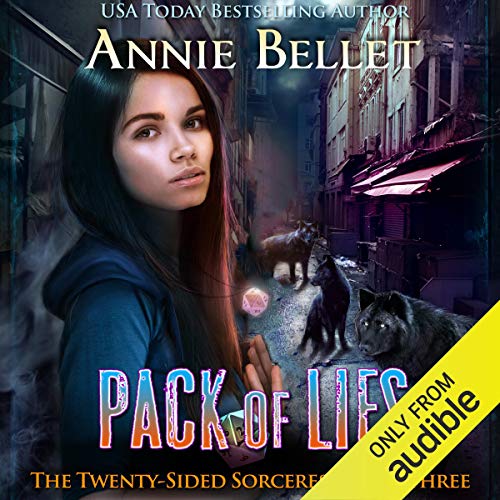 4.6 out of 5 stars
4.6 out of 5
439 global ratings
How are ratings calculated?
To calculate the overall star rating and percentage breakdown by star, we don’t use a simple average. Instead, our system considers things like how recent a review is and if the reviewer bought the item on Amazon. It also analyzes reviews to verify trustworthiness.
Top reviews

Theresa
4.0 out of 5 stars This series just gets better and better...
Reviewed in the United States on August 19, 2020
Verified Purchase
4.5 Stars... Things are starting to heat up in this series... Jade is still reeling from her choices regarding her birth family and the consequences that resulted... In addition, her love life appears to have stalled without explanation, her sociopathic ex continues to hunt her down, and now the werewolves are taking over the town in search of a new alpha... With pack politics taking centerstage, the last thing Jade needs is a mysterious death surrounding humans and all evidence of foul play pointing directly to the wolves... As events unfold, Jade is pulled deeper and deeper into her own power and attempting to keep those she loves safe from inevitable destruction... Tons of action, solid family foundation, and touches of humor to round it all out... I am really enjoying this series and all it has to offer:)
Read more
Helpful
Report abuse

C Thilmany
4.0 out of 5 stars I'm enjoying the series
Reviewed in the United States on October 28, 2014
Verified Purchase
I must say that this series has me hooked and wish the next book was already available. The alpha of all werewolves has died and the alphas from the different packs around the country are in town to fight for the position, only someone has started killing innocents in a political play. Once again Jade, a mostly in-the-closet-sorceress, is asked to help and the threats and challenges she faces just keeps growing with each book as she’s not the only one using magic.

Plenty of action and I’m enjoying watching her grow as she needs to keep thinking outside the box in order to exercise her magical muscles. All of the regulars are on hand, truly good friends that Jade now recognizes as family.

And I’m happy to say that one of the areas that I found fault with in the first book has been rectified; world building, especially with the shifters, has received more attention. Part of that is even though Jade’s friends are shifters, she never really asked questions. But one area is still lacking for me. Through Jade’s thoughts, words and actions, we know what her emotions are, but I’ve yet to actually get in her head and feel them.

There are a number of things that came up in this book that leave open interesting threads for future books and I can’t wait to see what the author does with them.
Read more
6 people found this helpful
Helpful
Report abuse

Margaret F.
5.0 out of 5 stars Another great installment in Jade Crow's story.
Reviewed in the United States on October 16, 2016
Verified Purchase
Originally posted on Tales to Tide You Over
This is the third book in The Twenty-Sided Sorceress, and like the previous two, it provides both a self-contained story and progress on the overall series arc. This is something Annie Bellet does very well, making each one I’ve read so far satisfying to read as a standalone urban fantasy while raising interest in the bigger picture as well.

I have my sister to thank for reminding me of the books I’d already purchased (she reviewed a different Annie Bellet novel). These novels are on the short side, but they don’t skimp on story or character development. They’re perfect for when I don’t have a lot of time and want a complete tale. Though, with the way book three ends, I really want to find out what’s going to happen in book four. It’s not a cliffhanger as the story is already complete, but there is a grand teaser in the epilogue.

I like how Jade’s character develops in Pack of Lies, or rather, I like that she develops if not necessarily the path she chooses. It is enough to make me curious about how she’s going to swing the crazy balance of her magic, her friends and family, and what she wants to be. I was sad to see Alek, her Justice boyfriend, missing in the beginning, but that doesn’t last long while he brings enough complications, and on multiple levels, to make the delay worth it.

Avoiding spoilers, I have to say a lot changes in this book, the kinds of changes that shift the whole landscape. This is important because one of the reasons for a long break between each book comes from past experience with series where I binge read and end up losing what I loved about the series as the patterns become obvious. There are some patterns in the first three, but they’re more thematic than repetitive. The new elements introduced in Pack of Lies seem to indicate the series will not fall back on old patterns but rather find different angles each time.

The dynamic of Jade and her band of loyal friends, including her boyfriend, is still going strong. There are humorous, smart alec moments to balance out the, at times graphic, violence, and many cute geek culture references for the reader’s amusement. I especially enjoyed the Tetris reference as it connects to my own experience with using the game’s lessons in real life.

The elements that drew me in are present and accounted for, while the stakes are high in this book, and the list of new and interesting villains continues to grow. I suspect it’ll take me a long time (possibly until Bellet ends the series) to grow tired of these characters and their struggles. It’s well worth the read.
Read more
4 people found this helpful
Helpful
Report abuse

Gypsy M
4.0 out of 5 stars Yet another Wolf-shifter book, but still loving Alek!
Reviewed in the United States on April 3, 2018
Verified Purchase
This adventure was okay. It didn’t make me hate Jade (at least not as much as the last book. Admittedly, I was disliking how she had reached the point of jumping to killing first.), but on the other hand it felt like just yet another wolf-shifter book without really anything special to make it stand out from the pack. Sadly my opinion of Jade carried over from the previous book as in I was still mad at her for leading her Justice boyfriend in the wrong direction deliberately twice and getting her hate-fueled vengeance against her grandfather rather than bringing him to proper justice and seeing that he actually learned a lesson. So, I was irked that she felt that Alek owed her an apology for breaking up with her and not calling. If anything, she was the one who should have been apologizing to him. And he just took her back like that as if she hadn’t done anything wrong. *grumble* The assassin was very cartoonish and sadly I didn’t take him seriously. And I am seriously tired of werewolves and packs and especially alphas. But it was fun watching Jade and Alek (he really is a glorious character to follow! I may be tired of shifters, but there’s still something alluring about a white tiger shifter with a Russian accent) work their way through the mystery (even if it was obvious). And I still love all of the geek culture references. After the end of the second book, I was actually hating this series (though I had bought the next book before I had gotten to that point), but now, I think I could be tempted to move on to the next book.
Read more
Helpful
Report abuse
See all reviews

Smileygirl
4.0 out of 5 stars Another good book in a strong series
Reviewed in the United Kingdom on November 16, 2014
Verified Purchase
This is the third of the series and I'll be buying the next one too! These books are paranormal murder mysteries with a love interest and friends, the lead is a reluctant sorceress who runs a comic book store. If you've not read the previous books stop reading this and go look at the first book *SPOILER ALERT for books 1 and 2*. Throughout the books there's been the hovering threat of Jade's ex-lover, who is evil and wants to eat her heart to steal her sorceress powers. In this book, we are edging closer to the final confrontation, Jade is really developing as a character, getting tougher and owning her powers and what she is. Things ended on a bad note in the last book and Jade doesn't want to make the same mistakes so instead makes some new ones and learns from those, her relationship with Alek also matures as they learn more about each other. I like Jade because she's not infallible but neither is she too-stupid-to-live.
Read more
Report abuse

Flora
4.0 out of 5 stars Another great novella in this urban fantasy series.
Reviewed in the United Kingdom on February 14, 2017
Verified Purchase
I have already read and enjoyed the previous stories in this series. I love Ms Bellett's writing style; the way she builds her characters, the world her tales are set in and the way the plot develops.
As with every great book written as part of an ongoing series, many of the mysteries and questions are satisfactorily concluded by the end of his book, while other far reaching story arcs are grown within these pages but left to be explored in later books.

The only reason this novella missed out on a 5th star was the handful of editing/proofreading error that occurred. These simple "predicative text" mistakes took the edge off for me.
Read more
Report abuse

Christina Blake
5.0 out of 5 stars Excellent
Reviewed in the United Kingdom on June 20, 2019
Verified Purchase
O love Jade, her shifter pals and if course, the gorgeous Alek. This was another excellent storyline, with the alphas etc. Looking forward to the next in series now...
Read more
Report abuse

Dibs Dickenson
5.0 out of 5 stars Stunning ORIGINAL series
Reviewed in the United Kingdom on April 9, 2015
Verified Purchase
Adore these books. Great geeky heroine with sooooooo many references (as you'd expect from her moniker). Always sad when I've finished the book - bit like when you finish the 1st series of firefly & then the realisation hits you.............(too soon....) But joy of joys it's a series of books not a scifi programme at the whims of a TV network (yaaay) so fingers cross for lots....... (Pleeaaaaase?)

For those of you wondering what I've been wittering on about - it's an incredible series with a refreshingly new idea and definitely worth reading.
Read more
Report abuse