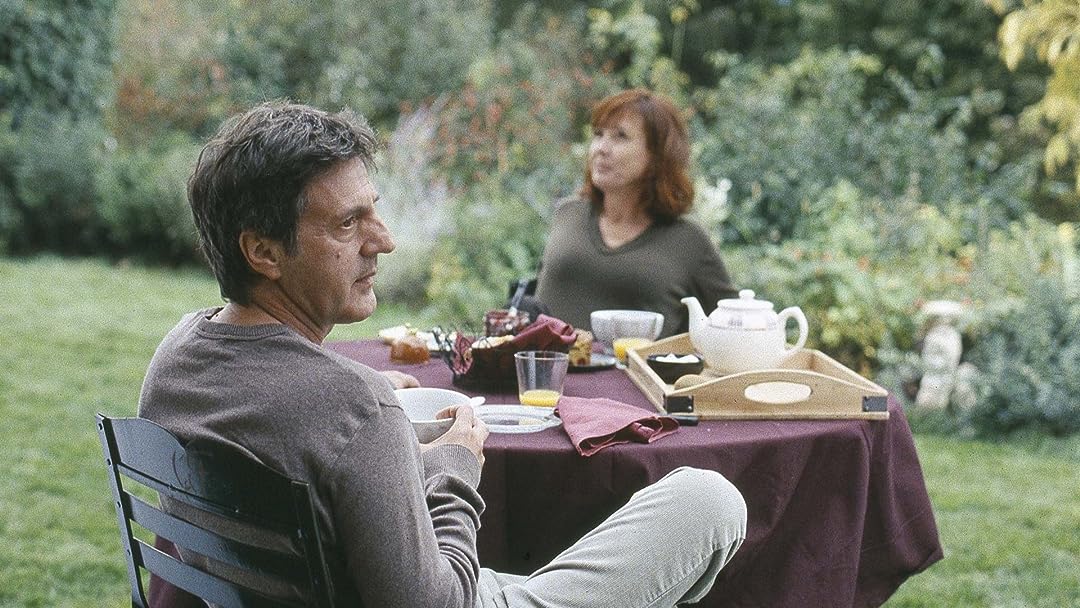 To Paint or To Love

(10)
1 h 34 min200516+
After Adam and Eva's house burns down suddenly, their friends William and Madeleine are forced to lend a helping hand and play host. The arrangement leads to tangled feelings, ensuring that the friendship will never be the same, in this romantic drama.

John P. Jones IIIReviewed in the United States on May 30, 2019
4.0 out of 5 stars
“Sunset over the Vercors”…
Verified purchase
I’ve seen it many times, on the autoroute, near Grenoble. A brown sign that proclaims “Vercors- Place de la Resistance.” ‘Tis a shame that Google could not find it for me again. The Vercors was the site of serious fighting between the French Resistance and the Nazis during the Second World War. Regrettably, I’ve never ventured up onto the plateau. But the chief pleasure of watching this movie was the setting of the farmhouse that the two principal characters, played by Daniel Auteuil and Sabine Azema, purchased and lived in. There was a cultivated walnut grove in the foreground, and the Vercors plateau in the background. I checked the immatriculation of the car’s license plate, which had a “38” designation: the departement of Isere, of which Grenoble is the principle city.

Daniel Auteuil is an excellent actor, who was born in Algiers, in 1950, when it was still very French. I found his performances in the movies based on Marcel Pagnol’s novels, “Jean de Florette” and “Manon des Sources” absolutely brilliant. And I also very much liked his performance in “The Well-Digger’s Daughter.” He is the principle reason that I watched “To Paint or to Love,” which was directed by Arnaud and Jean-Marie Larrieu and released in 2005.

Alas, the central aspect of the movie: “swinging,” simply did not “click” with me. And I had the feeling it didn’t click with Auteuil either, whose performance tacked towards the wooden. It is Azema who makes a pretense of being an artist. She drives into the countryside, sets up to paint the walnut grove, with the Vercors in the background. It is the blind mayor of the commune who “smells” her painting… one thing leads to another, including the purchase of the farmhouse in the background. The mayor is married to a young attractive woman, and the four soon become good friends, sharing meals together. Of necessity, the mayor is rather tactile, and so, yet again, one thing leads to another. I’d have an uncomfortable stumble or two myself.

Blindness is one of the sub-themes, and what that truly means. One major takeaway was the mayor’s wife’s description of an ancient cave, where there was no evidence of any fire, and thus light, yet it had some excellent paintings on the wall. Could that be possible? And with a bit of serendipity, Gauguin and the Marquesas were thrown in… as in, the classic place to escape to, in case “swinging” became too much, or perhaps just another venue for same. Since I have recently been reading about the Marquesas, including Melville’s “Typee,” that portion of the movie also resonated.

For the Vercors, and life in the French countryside, in a farmhouse, I’ll round up to 4-stars.

Emmanuelle PancaldiReviewed in the United States on March 20, 2019
1.0 out of 5 stars
Movie feels disconnected, acting is very labored
Verified purchase
While I thoroughly enjoyed the gorgeous scenery in the Vercors, the movie felt very disconnected, the acting felt forced and extremely labored, the poorly written scenario was unconvincing, at least in French in my opinion - I am not sure how it translates into English, but the dialogues felt very unnatural, made me cringe constantly as a French native! There could have been potential with a better dialogue, I never felt any passion in the relationships, all totally flat and non-sensical. The discomfort between all the actors was palpable, and I was left feeling like I wasted my time. There are so many other wonderful French movies out there, don't waste your time on this one!
6 people found this helpful

Amazon CustomerReviewed in the United States on February 11, 2020
2.0 out of 5 stars
not even sure what this is about
Verified purchase
not even sure what this film was really about. a couple has newly retired, and then they decide they will get into group sex and switching partners? rather superficial relationships. and why is that the theme of a movie? it just doesn’t go anywhere, leaving the viewer wondering what they are supposed to be interested in. just leaves me confused. did have some nice cinematography though.
One person found this helpful

papababooReviewed in the United States on July 6, 2019
5.0 out of 5 stars
a gentle step into a new world
Verified purchase
I came away from this movie appreciating the all around loving vibe, which was admittedly imperfectly expressed by somewhat wooden acting. And that William and his wife decided to stay at the end made total sense. The had gotten over the world-altering impression of their first adventure and realized that it was now possible to experience a wider range of love making anywhere.
One person found this helpful

Ariel BlueReviewed in the United States on September 23, 2018
5.0 out of 5 stars
Great Male Leads
Verified purchase
I read the first review. If it is so Anti Hollywood? Why all naked chicks again? No male bodies to be seen. Is there something wrong with the male anatomy?

Adam VerverReviewed in the United States on September 16, 2018
5.0 out of 5 stars
The most anti-Hollywood film ever made.
Verified purchase
The most anti-Hollywood film ever made. It would take "a good bombing of Hollywood", as Jean Renoir once said to Satyajit Ray, to produce a film like to Paint or to Make Love (not just "to love” as the prudish title translators would have us believe). Add to this recipe the re-writing of 387 years of American civilization history, that starts with the arrival of a first batch of Europeans other then the puritans.
4 people found this helpful

GigiReviewed in the United States on December 27, 2018
2.0 out of 5 stars
We Were Very Surprised About Daniel Auteuill's Participation...
Verified purchase
This film starts with the potential to hold an audience in rapt attention and slowly descends into debauchery. Great talent stoops to new lows.
3 people found this helpful

errin spellingReviewed in the United States on January 17, 2019
5.0 out of 5 stars
Bob and Carol and Ted ans Alice would be shocked
The scenery is beautiful,in the meadow. The wife asks her newly retired husband ,to go for a walk. Then you see her driving a car. They step out and she shows him a farm house for 140,000.00. He tells her , he will take care of everything and it seems like she runs an errand or goes to work, which she does only once,in the entire film. when she comes back,he has apparently bought the house, moved everything in and planted an 8 foot tall giant rose bush. It seems like a beautiful retirement story, but it is very nusual and time slips away. You have no idea how much time passes,between each scene. Very confusing, but possibly, not important.
They are very much in love ,it appears and very happy. But the movie is very shocking. Is this what people who are bored,in the country, do with their neighbors and total strangers.
4 people found this helpful
See all reviews
Back to top
Get to Know Us
Make Money with Us
Amazon Payment Products
Let Us Help You
EnglishChoose a language for shopping. United StatesChoose a country/region for shopping.
© 1996-2022, Amazon.com, Inc. or its affiliates