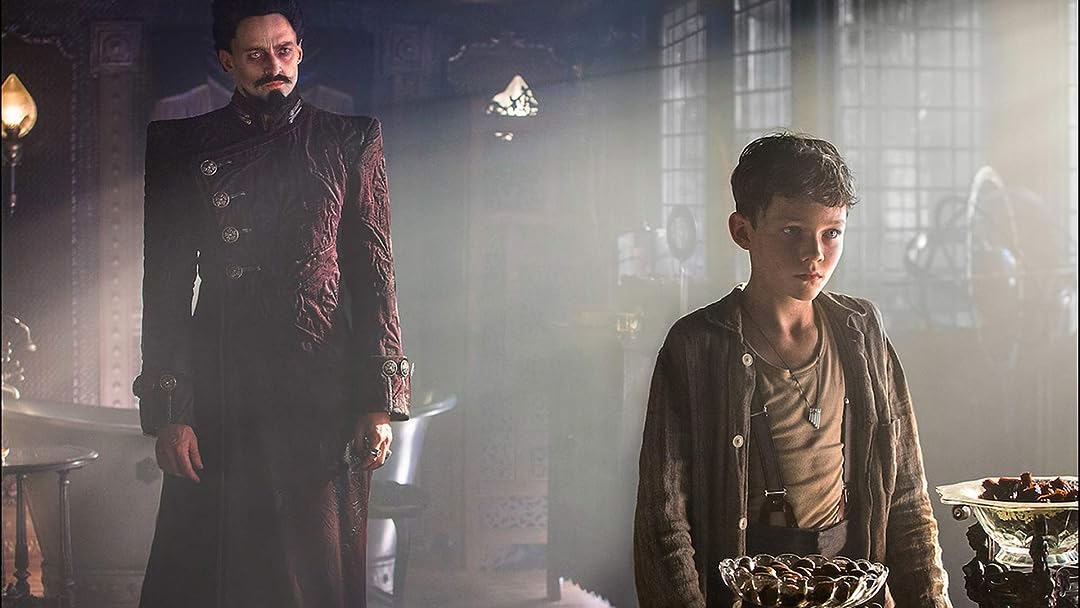 (3,207)5.71 h 51 min2015X-RayPG
Peter is a mischievous boy who is whisked off to the magical world of Neverland, where he finds amazing adventures and discovers his true destiny—to become the hero Peter Pan.

peter paperReviewed in the United States on April 18, 2020
1.0 out of 5 stars
Good for instilling anti Christian bias
Verified purchase
Anti Christian subtleties get old. This is just another Hollywood brainwashing piece in the evil nun sub genre. Monastics are good people in real life. But if you think they're not it means the brainwash is working. I got a few minutes in but turned it off when pan tweaked the nose of the holy Theotokos.

The acting was good up to that point. Can't give an opinion on the rest.

Gary W. PhelpsReviewed in the United States on July 30, 2020
5.0 out of 5 stars
An additional and enchanting version of Peter Pan
Verified purchase
James M. Barrie was the author of the original Peter Pan who wrote plays and produced the same in theatres. One main theme was boys and girls - sometimes adults - leaving the real world and going to Neverland. In 2015, a new DVD version debut of Peter Pan appeared. This new version was based on war orphans being kidnapped for mining labor and taken from World War II England during a Nazi bombing raid on flying mast ships that outran British spitfire aircraft?! Peter Pan is played by Levi Miller who is a 12 year old incredibly precocious boy actor augmented by the adult cast members Hugh Jackman, Garrett Hedlund and Rooney Mara. A common theme in movies is people who are caught in the grips of war remain stable by momentary escapes into phantasy,
and return to realities. This version is superb and worthy of a 5-Gold-Star-Rating for individual and family viewing.

No Name 06Reviewed in the United States on November 13, 2018
5.0 out of 5 stars
GREAT 3D and the kid playing Pan did a fine job
Verified purchase
I know I am going against the grain here, but I thought this is be a great movie. As a 3d buff...I loved it. And if I was 12 years old again I really love it.
It was just a fun filled, action packed, glorious movie. It had absolutely wonderful action scenes especially in 3D. Peter Pan before Neverland , I thought the story line quite believable for a fairy tale LOL . I could only wish for the sequel...which will never happen.
6 people found this helpful

JDReviewed in the United States on May 23, 2016
2.0 out of 5 stars
I really wanted to like this movie.
Verified purchase
I ignored the bad reviews. I like cheesy movies, and I love Peter Pan. I figured, how bad could it be?

To the number of reviewers who said things like, "This is not the Peter Pan I know," I would argue that this is an original work and, as such, is required to bring its own interpretation to the characters and the story. That being said, it is still responsible for the choices that it makes for those characters and story...most of which make absolutely no sense.

Why is Hook an American cowboy? He is given no backstory whatsoever, which seems an odd choice for a prequel which is ostensibly introducing the character. In addition to that, his accent is so cartoonish that at first I assumed the actor must actually be foreign (no, he was apparently born in Minnesota), and his outrageous over-acting makes me want to throw something at the TV every time he opens his mouth.

Why change the real world setting from Victorian times to World War II? It's an interesting choice, but other than giving the pirate ship a chance to have a brief and gratuitous air battle with the Luftwaffe, it seems to hold no purpose. SO MUCH could have been done with that idea, and instead it's a total throwaway.

WHY DO THE SLAVES SING "SMELLS LIKE TEEN SPIRIT"?? It was jarringly out of place, and the only hint at an explanation is Blackbeard's line shortly thereafter about Neverland "spanning all places and all times" or something like that. Like so many other things in this movie, it could have been a good idea, but was poorly executed and instead just felt random.

The movie is visually stunning, and young Levi Miller is definitely a talent to watch. Hugh Jackman chews up the scenery entertainingly. These facts bumped my review up to 2 stars. The movie has few other redeeming qualities. It's filled with interesting concepts, but no overall narrative structure to actually develop those concepts into a real perspective. It's difficult to imagine how the serious little orphan in search of his mother and the self-confidence to fulfill his destiny will become the carefree boy who refuses to grow up.

If you're looking for a prequel to Peter Pan, check out Nick Willing's 2011 "Neverland" TV miniseries. It too takes the position that Hook and Pan were friends before they were enemies, but unlike this movie, it actually shows the disintegration of that friendship as well, and truly sets the stage for the story that we all know and love. This one just falls flat.

Old Timer TooReviewed in the United States on January 21, 2016
4.0 out of 5 stars
Well paced, but doesn't quite hit any audience.
Verified purchase
This was a very nice prequel to J.M. Barre's work. It provides us with a plausible background for Peter Pan and makes for a good film. But it can be very frightening to younger children, unlike Barre's play, and "Hook", the sequel starring the late Robin Williams. I'm not sure what audience the producers were seeking, but I'm not sure they hit any of them. While it contains little in the way of offensive language, the terror of hideous monsters is very real. But not the slasher horror films that draw teenagers with the overt violence.

The only known star is Hugh Jackman who plays Blackbeard, the pirate. The rest were relative unknowns to me, but were all accomplished in their performances. I'm not sure that Jackman was ideal for the role, just as he was not ideal for his role in Les Miserables, the movie based upon the musical.

For these two reasons, I gave it four stars because I have to admit that I liked the film. I'll watch it again.

These are magical ships who can sail through the sky with no problems. Blackbeard takes orphaned boys from earth to work in the mines in Neverland, seeking to find the crystals of Pixem (pixie dust) for power. The pixies have gone underground and are protected by Tiger Lillie's tribe, who fight off the pirates. Pan meets up with James Hook, who, in this prequel is an Indiana Jones "good guy" throughout the film. Peter is strong willed, and a hero in waiting. He doesn't know what his heritage is, but eventually finds out that he is the son of a prince and a pixie mother.

The film opens with a very agile young woman leaving the infant Peter on the steps of the orphanage. The place is run by nuns who are anything but kind and gentle and caring. Peter is rebellious and along with nibs, cause all sorts of mischief, eventually finding the head nun's stash of coins and food, despite this being placed in World War II England.

It is from this orphanage that Blackbeard nabs the boys for work in his mines. Rather than go any further, some of the scenes reminded me of the film adaptation of the musical Oliver and I expected the orphan boys to break out singing Food, Glorious Food. They didn't but easily could have.

Hook is an interesting character. As I mentioned, he is an Indiana Jones type of character and the film bears some resemblance to the films. Altogether, an interesting film that kept us watching. Well paced.
One person found this helpful

m_badesReviewed in the United States on November 23, 2019
5.0 out of 5 stars
Incredible story. Horribly age rated.
Verified purchase
This is an incredible show but I definitely don’t recommend it for young kids. The first time I watched it I was eight and I had nightmares for months. I watched it again when I was thirteen and it gave me chills it was so good.
Not for kids.
Tweenagers will love it.
2 people found this helpful

AlReviewed in the United States on January 16, 2016
3.0 out of 5 stars
total crap. I blame the director
Verified purchase
Whomever chose to have Hook as John Wanye is an idiot, including the actor. I AM........ JOHN HOOK. wtc?!? Well the kid and Jackman really make this film. I just can't handle Hook being ......urgh, let's just say, total crap. I blame the director.

Other than that. It's pretty enjoyable. I don't think that I wasted money on the rental. I "kinda" liked it.

I would have liked it more if the soundtrack was completely original. There was ABSOLUTELY NO NEED to have Nirvana nor the Ramones in this film..... I really don't understand why they did that. It cheapened the film. (though, they did do the tracks well in a new tempo and style)

It's ok, for an origin story. It did focus a ton on character in the first third, then went crazy after that.

Seriously dissapointed with Hook. I cannot stress that enough....

But at the end, I'm just an average Joe, ranting about like Joes do.
See all reviews
Back to top
Get to Know Us
Make Money with Us
Amazon Payment Products
Let Us Help You
EnglishChoose a language for shopping. United StatesChoose a country/region for shopping.
© 1996-2021, Amazon.com, Inc. or its affiliates