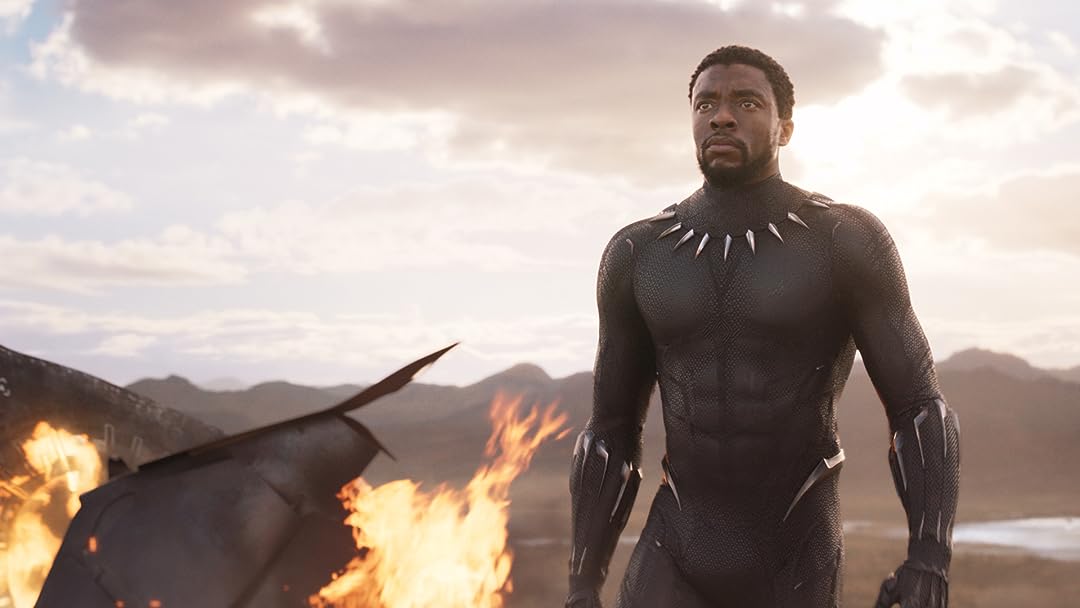 (30,087)
7.32 h 14 min2018X-RayPG-13
When young King T'Challa is drawn into conflict with an old foe that puts his homeland Wakanda and the entire world at risk, he must release Black Panther's full power to save them.

ClayconReviewed in the United States on November 13, 2018
1.0 out of 5 stars
Surprisingly bad - what a shame
Verified purchase
Wow! After all the hype I was super disappointed in this film. Here’s why: the CG sucked & was extremely sub par for a marvel universe film. The soundtrack was terrible! I love African tribal drums & a really good opportunity was wasted here with what came out to be mostly generic orchestration. The fight choreography was lack-luster. The plot wasn’t very good either. So many plot elements did not make sense for certain characters. Also it was sad to see so many African American actors butcher their African accents. Would have been good to bring in a vocal coach for those that needed it. All in all this film was not very engaging but seemed to be full of deep symbolism - which made it very off balance. It could have been a cultural masterpiece (like the Lion King) but what we got was a B-movie production with an A-movie budget. While this was not the worst marvel film it was definitely the most overrated & should not have won so many awards & nominations.
137 people found this helpful

DavE.Reviewed in the United States on July 22, 2018
5.0 out of 5 stars
And what a terrific fantasy / action movie it is
Verified purchase
I know nothing of the Comic. This review is of the movie only.
And what a terrific fantasy / action movie it is. The action drives this film, it's pretty much where all the important plot points happen. There's a good story arch that reveals itself later in the action, and there's lots of action.
The tech is advanced far beyond our current level of abilities. Which makes for some really cool and fun stuff. I'm not going to spoil anything.
The hero is, of course, a mild mannered and underassuming guy, who proves fallible, but capable. He has a large support system of friends who make interesting characters.
I don't want to give away too much. I wouldn't hesitate to take young kids to this movie. But I'm mostly liberal with children and movies. I don't remember any swearing and little gory blood stuff except one scene where some blood pools on purpose.

M&amp;AReviewed in the United States on November 18, 2018
1.0 out of 5 stars
Total waste of money
Verified purchase
Absolutely sucked,,,what a joke. Must be nice to have people tell you your movie is awesome simply because they are afraid of the repercussions if they DON'T....
DONT WASTE YOUR MONEY
100 people found this helpful

oo0ooReviewed in the United States on June 22, 2018
5.0 out of 5 stars
A great movie, lots of action with a great pace. Stays true to original comic character, and Boseman's portrayal is perfect.
Verified purchase
I've been a comic book collector for decades, and Marvel's universe, and characters have always been in my collection. I've enjoyed this movie and the Blank Panther portrayal compared to the original comics. Although there's much more to this movie than a simple film, it did inspire a movement and made more money in the box office breaking records until the Black Panther appeared again on film in the next Avengers movie of 2018. I won't add any spoilers, but this is certainly a must add to any Marvel fan's video collection.
93 people found this helpful

ChachReviewed in the United States on October 11, 2018
1.0 out of 5 stars
Boring and hidden agenda
Verified purchase
Terrible for film. Plot was bad and story was poor. Way to globalization orientated and political. Not worth the rental price
77 people found this helpful

Peter WeylandReviewed in the United States on March 9, 2019
5.0 out of 5 stars
Ignore the Trolls - BP is on Point
Verified purchase
You couldn't pay me to believe that the one-star reviewers even watched Black Panther. Bottom line is that there was an orchestrated effort to drive the reviews down for this movie, by people who didn't care for BP for very obvious reasons. For the rest of you who are actually open-minded, absolutely rent this if you haven't seen it yet.

Jeffre WestReviewed in the United States on October 8, 2018
1.0 out of 5 stars
wow.
Verified purchase
Worst. Movie. Ever.
55 people found this helpful

joel wingReviewed in the United States on May 12, 2020
5.0 out of 5 stars
A cultural event with inspiring messages while containing a great conflict to drive the story
Verified purchase
When Black Panther came out I told everyone it was going to be a cultural event and it was. The film was not only a fantastic Marvel superhero story, but it meant so much to people who appreciated it.

The movie gets off to a great start with a scene in Oakland, California. That was a nod to director Ryan Coogler’s hometown. Not only that but in the background local rap star Too Short is playing.

The story focuses upon the conflict between Prince T’Challa the Black Panther (Chadwick Boseman) and Killmonger (Michael B. Jordan). T’Challa has just taken over the throne of Wakanda after his father was killed in the Captain America Civil War movie. He was the rich privileged son who was still learning how to rule. Killmonger on the other hand had his father Prince N’Jobu (Sterling K. Brown) killed by T’Challa’s father for betraying his country. He grew up poor in Oakland and then joined the U.S. military to learn how to become a warrior so that one day he could return to Wakanda and take what he felt was his. Killmonger wanted to use the wealth and power of his country to free black people around the world in an international revolution and create a Wakandan empire. You could say he was an anti-hero as he wanted to fight for the oppressed. To have an effective movie like this you need a good villain and Killmonger provided that in spades. He was even more interesting than T’Challa for much of the movie.

Winston Duke as M’Baku the head of the Jabari tribe also stands out as a character. He stole almost every scene he was in and had one of the great lines when he threatened to serve CIA agent Everett K Ross (Martin Freeman) to his kids and then laughs and says they are vegetarian.

The importance of the film is on display throughout. First, Wakanda is the most technologically advanced country in the world based upon its vibranium, a rare metal that has special powers. The West has always portrayed Africa as a backwards, impoverished continent full of conflict. These stereotypes started during the colonial period and exists to the present. The Black Panther reversed all of those images with its portrayal of Wakanda, its people and its civilization. This is one reason why the movie was such an event, because it presented such an inspiring image of an African nation.

The Black Panther also championed African culture. The costumes were amazingly designed and often used real African designs such as the blankets many of the characters wore which come from Lesotho a nation in southern Africa. None of the Wakandan women had straightened hair either. Straight hair is considered “good hair” in black culture because of centuries of cultural imperialism that have told them being white is beautiful. Thus they use all kinds of hair products to straighten it like Europeans have. The only time there’s straightened hair is when the head of T’Challa’s pretorian guard Okoye (Danai Gurira) is wearing a wig. She ends up throwing it off because she looks so ridiculous in it. Last, the Wakandan language was a real African dialect from South Africa. Again, these all instilled pride in people.

Last, the movie had a series of strong female characters. Besides Okoye there was Princess Shuri (Letitia Wright) T’Challa’s sister who at only 16 was the head of the country’s technological development. Nakia (Lupita Nyong’o) was a Wakandan spy and T’Challa’s love interest. Last Queen Ramonda (Angela Bassett) was T’Challa’s mother. To have so many leading women especially in a superhero action movie was a rarity.

All together this is what made The Black Panther so special. The conflict between T’Challa and Killmonger worked out differently than your usual good vs bad dichotomy because Killmonger actually thought what he was doing was right. You had the overturning of centuries of stereotypes with a celebration of Africa, and you had a great supporting cast. It’s the reason why I have watched Black Panther over and over again both in the theater and at home since it came out. It’s still as good as the day I saw it on opening night.
C
19 people found this helpful
See all reviews
Back to top
Get to Know Us
Make Money with Us
Amazon Payment Products
Let Us Help You
EnglishChoose a language for shopping. United StatesChoose a country/region for shopping.
© 1996-2021, Amazon.com, Inc. or its affiliates