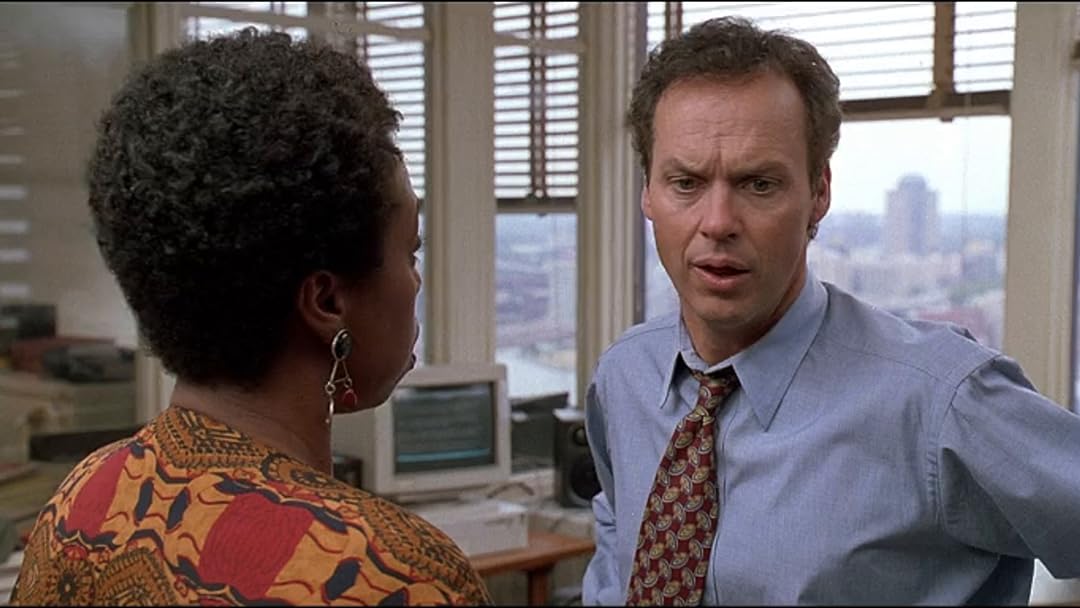 Lynn DionReviewed in the United States on January 8, 2018
5.0 out of 5 stars
One of my all time favorites for a good mood lifter
Verified purchase
One of my all time favorites for a good mood lifter. I worked in New York in a similar, if slightly less manic setting, the proofreading pool of a huge multinational law firm. The flavor of a bunch of often brilliant and invariably driven, perfectionistic, overworked and underpaid working rats of the city shoved together in inadequate space, running on caffeine and ass busting remarks, is 100% represented. Performances are damn near perfect, stereotypes are humanized deeply enough to actually see how they come into being, and the gorgeous pre-sunrise shot of the Twin Towers near the end will break your heart. This is one that stands up perfectly twenty years later, and will stand up in another twenty.
16 people found this helpful

Paul S. PersonReviewed in the United States on January 29, 2020
5.0 out of 5 stars
Letterboxed at Last!
Verified purchase
This is an excellent film, depicting one day in the life of the characters.
A very busy day, for the characters are involved in putting out a daily tabloid newspaper.
And a very big story has just appeared, requiring confirmation before it can be printed.
But the best news is that, after waiting 9 years, I can finally see the movie in the proper aspect ratio!
Now for the notes on the BD:
This is an MoD BD (so far as I can tell). This means that it is similar to a DVD-R:
a) the aspect ratio has been correct on every DVD-R so far, and the MoD BDs appear to be maintaining this tradition
b) the quality of the source materials is not always as good as might be wished; in this case, however, I saw no problems; still, other reviewers did, and to them I say: this is how it is with Mod BDs/DVD-Rs
c) Universal DVD-Rs tend to have nothing on them but the film, which starts immediately and sometimes restarts when it ends; this BD starts immediately but does not restart; it has no main menu, but does have a popup menu for activating subtitles, but that does not work; the subtitles can be activated with the remote's "Tool" button, and turn out to be English SDH; the film is one chapter
These discs are not made for elitists. They are not made for those who value special features. They are made for people who want to /watch the movie/. And who have been waiting a long time to do so. They are films whose market cannot support the effort required for a full-scale DVD (never mind BD), but a smaller market for them does exist.
My advice on these is this: if you have been waiting and waiting for the film, buy it. The chance of it coming out on a full-scale DVD or BD is nil, for what market there is is being exhausted by the DVD-R/MoD BD. But if you are picking a few films from a list of films, all of which you want to own eventually, pick the full-scale DVDs/BDs first. You can always buy these when you either get desperate for them or run out of other films to buy.

wisdomstarReviewed in the United States on January 19, 2018
5.0 out of 5 stars
the blu-ray upgrade of this excellent film is definitely worth the money
Verified purchase
I saw this when it first came out and remembered that I had liked it. But I am amazed that twenty something years later it is just as good and just as relevant as it was then. The script is fast-paced and director Ron Howard moves you smoothly from character arc to character arc without the feeling of being jerked around that directors like nowadays. The music is as good as ever - keeping the sense of comedy, the sense of drama, and the sense of tension going. The blue ray is excellent - I have a 3d player that upgrades even blu and dvd, and a 60" TV. I felt like I was right there in the newsroom or bar or rooftop with the actors. I watched it twice last night.
6 people found this helpful

Kerry L DanielReviewed in the United States on May 14, 2022
4.0 out of 5 stars
Brilliant cast and a realistic peek inside a newsroom....
Verified purchase
I rented this because I'm a big fan of actress Glenn Close, and this was one of her films I had not seen. Sadly, the newspaper business today is all but dead. What a shame. I once thought I wanted to be a news reporter one of our country's great newspapers, but I don't think I could have withstood the pace even with a Type A personality and youthful energy. What an exciting experience it must have been, and I think this was an accurate picture. Michael Keaton was brilliant in the lead--don't know another actor who could have matched his pace and delivery. All in all, very entertaining.

Quincy D. BrownReviewed in the United States on July 9, 2021
5.0 out of 5 stars
Anyone interested in a Newsroom?
Verified purchase
This is a great movie if you want to see the inner workings of a newspaper. It's Hollywood and drama, but the acting was great, you felt like you got the spirit of a newsroom, and it ends well enough. Although 1990's movie, the subject then is as fresh now, with a metro editor played by Michael Keaton who wants to beat the competition, while dealing with all the pressures and barriers of his own newsroom, to save two black youth who happened onto a crime scene avoid prison from a false allegation from a witness who assumed they murdered some wise guys. A lot of uplifting scenes. A lot of good humor and for one day, you get to see how print journalist deal, sometimes very crazily to life and words.

Frannie FresnelReviewed in the United States on July 27, 2008
4.0 out of 5 stars
You sent Robin?
Verified purchase
"Highly entertaining albeit thin journalism thriller" is the line from the product description ... I could not disagree more! It is, indeed, noir-less, and it does pack a ton into it's twenty-four hour time frame but this is a really good ensemble movie. The dialog carries the story along effortlessly and, for me, the mark of a good movie is the use of real characters at every level of the story ... even the air conditioner repairmen seem to be more than bodies adding to the realism of a busy newspaper office.

My favorite minor character is Robin, the extremely young photographer ("how old is Robin ... fourteen?") sent out to photograph the perp-walk pertaining to a highly volatile story that could lead to race-riots in the Williamsburg section of NYC in July. Her scenes consist of that marvelous combination of high anxiety fraught with humor (not the other way around!)

Marisa Tomei as Martha, the hugely pregnant, reporter-on-maternity-leave wife of Henry (Michael Keaton), metro editor, is just fabulous in this role. Right from the get-go ("Nice pajamas, Henry" as the alarm goes off and Marty sees her husband sacked out on top of the bed in his work clothes) she creates enormous sympathy for her character without manipulating the audience. Glenn Close is just great as Alicia, the overspending, unfaithful, minor NYC celebrity wanna-be albeit talented, pragmatic businesswoman in charge of keeping the paper from going into bankruptcy every month. Randy Quaid, as MacDougall, gets more info-gathering done dozing on the couch while half listening to the police scanner in Henry's office than the reporters are managing out on the streets. The Sandusky side story for MacDougall's character is hysterical, with a truly scary-funny fight scene involving a gun. Robert Duvall takes the stereotype of Bernie, the hard-bitten, chain-smoking, borderline alcoholic, dissipated Editor in Chief of the paper and gives it the Duvall magic. The Pablo Picasso speech to Alicia is one of my favorite scenes in the movie. Last, but not least, is Michael Keaton as Henry, the manic, multitasking, "we're not getting our butts kicked today" Metro editor of The Paper. That bit of casting was just perfect. He doesn't struggle with anything until the movie reaches its climax. He just bulldozes through objections to his modus operendi as so many gnats that have to be swatted away. "I don't f***ing live in the f***ing world, I live in f***ing New York City!!!" he screams into the phone, while his long-suffering secretary (another fantastic character) looks on and utters, "Well, that went well." The two young men whose hapless "wrong place, wrong time" situation lands them in jail on murder charges are the most serious characters in the movie. Their plight is conveyed to the audience in brief, but powerful, scenes, making the viewer anxious for the paper to get it right.

I think the "thinness" criticism of The Paper and the criticism that Ron Howard's choice of film vehicles makes for a "vanilla" movie comes from the notion that ambiguity and unresolved angst are stock-in-trade atmospheric requirements for a film about a gritty NYC tabloid commuter paper. Mr. Howard has taken a lightening rod of a racial story, broken air-conditioning, lots of inter-character tension and camaraderie at all levels of office personnel, dumb luck, ergonomic chairs, illness, pregnancy, journalism, estrangement in both the short and long term, murder, shootings, birth, competition, love, ambition ... and has used it all to create a movie where the lives and reputations of two young men hang in the balance while the clock ticks and we slowly learn that truth itself turns out to be The Paper's main character.

One of my favorite movies!
3 people found this helpful

WEAK HEART 4 LIFEReviewed in the United States on March 19, 2019
5.0 out of 5 stars
THE CUTTHROAT WAY A NEWS PAPER MOST LIKELY OPERATES
Verified purchase
MY FRIEND WORKS FOR A LOCAL NEWSPAPER. AND HE WAS TELLING ME SOME STORY'S ABOUT HOW AND WHAT GOES ON BEHIND THE SCENES OF A NEWSPAPER AND JOURNALISM. I WATCHED THIS FILM MANY YEARS AGO BUT I DID NOT REMEMBER A WHOLE LOT ABOUT IT SO I DECIDED TO CHECK IT OUT AGAIN. DIRECTED BY RON HOWARD THE PERFORMANCES IN THIS FILM ARE OUT STANDING MARISA TOMEI PLAYS HER STRANGEST ROLE YET A VERY PREGNANT OUT OF WORK JOURNALIST WHO SPENDS HER DAYS BORED HOUNDING HER NEWSPAPER HUSBAND PLAYED BY MICHAEL KEATON BY HANGING AROUND THE OFFICE AND CALLING HIM ALL THE TIME. VERY ENTERTAINING FILM FROM START TO FINISH WITH PERFORMANCES BY GLENN CLOSE, RANDY QUAID, ROBERT DUVALL

Mrs. SantaReviewed in the United States on July 30, 2018
1.0 out of 5 stars
Bought cheaply - and got one penny's worth of pleasure ...
Verified purchase
Bought cheaply - and got one penny's worth of pleasure - if that. Part-way through, both picture and sound were all screwed up. Tried fast forwarding to see if I could get to an unaffected spot. That worked for a bit and then it happened again and there's nothing wrong with my DVD player. The content didn't immediately grab me, so it wasn't worth bothering about. I paid very little for it - and got very little for my money. Ended up throwing it away.
See all reviews
Back to top
Get to Know Us
Make Money with Us
Amazon Payment Products
Let Us Help You
EnglishChoose a language for shopping. United StatesChoose a country/region for shopping.
© 1996-2022, Amazon.com, Inc. or its affiliates