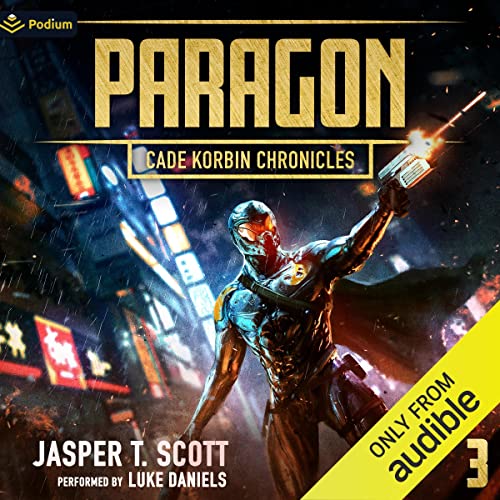 The fate of the galaxy is in his hands.

Cade Korbin is playing for keeps this time. If he doesn’t find a way to eliminate Nadine Zabelle once and for all, she will be the death of him and everyone he cares about. Armed with a suit of armor from the long-dead Priors, a mysterious sample of sentient and self-replicating nano bots, he accidentally discovers what killed the Priors - Omnipotence.

But Nadine isn’t an easy woman to reach, and she’s determined to break Cade along the way.

Meanwhile, the galaxy itself is under threat from a savage swarm of replicating machines, and a fight over the alien Gateway that was built to keep the swarm in check is fast drawing the galaxy into a violent war that could end billions of lives.

But the shocking truth of what lies beyond the Gateway could spell the end for everyone else. Ultimately, Cade will have to choose between using his newfound power to save the people who matter most to him, or saving the innocent multitudes who will die if he doesn’t intervene.

Special invitation from Audible!
Learn more about Membership
List Price: $34.99
You Save: $5.00 (14%)
By completing your purchase, you agree to Audible’s Conditions Of Use
Sold and delivered by Audible, an Amazon company
Share

Kunk Family
2.0 out of 5 stars Murphy’s Law, But Only in the Negative
Reviewed in the United States on August 31, 2021
Verified Purchase
First off, this writer does a very swell job of setting up his stories. The writing is on point and the characters and their interactions are very believable.
Having said that, I dislike these books. Spoiler: the main character is a top tier bounty hunter and an ex-special forces operator. He has basically been a super commando for 20+ years. But all of the sudden everything he does is wrong. He makes all the wrong choices, trusts all the wrong people, says all the wrong things, and gets into every single negative outcome of any situation he is in. I can see that for one book, but three? It’s just exhausting to read.
This series is a big no thank you, from me.
Read more
One person found this helpful
Helpful
Report abuse

Tad Crisp
4.0 out of 5 stars Big Stuff, Little Stuff
Reviewed in the United States on November 4, 2021
Verified Purchase
I like this book and this series in general. Many SCI-FI books are filled with mind numbing leaps and endless peril (in fact, that almost defines the space opera genre), where the stories are huge. Others deal only with a seedy underworld enhanced or endangered by technology, where the stories are small, almost meaningless. This book has these things, but they are not really the story. Big things are in a corner of the backdrop, with occasional familiar characters interacting with the primary ones, but only as needed. The “big” peril is in a distance, and does not require the protagonists to solve it. This story is a a fun romp that involves very few people, and a good, revenge vs. revenge plot which grows as it unwinds, it has a good twist, and is fun to read.
Read more
Helpful
Report abuse

jjdrymiller
4.0 out of 5 stars Could have ended here but we’ve one more book in series
Reviewed in the United States on August 8, 2021
Verified Purchase
It seems there is another book in the series though this could have ended the storyline as far as I am concerned. The bad people are dead and the good people still alive in some fashion or other. This story involved time travel. I’m not a fan but this seemed to handle it decently. I will check out the next and hopefully final chapter.
Read more
One person found this helpful
Helpful
Report abuse

A. Rutter
3.0 out of 5 stars Interesting, but turns twisted
Reviewed in the United States on November 4, 2021
Verified Purchase
About half-way through I thought this was a solid 4 rating, then things got strange. About 75% into the book and the violence had to turn sadistic and twisted again. It's actually a pretty good story, and the grammatical errors in book 2 are gone. For some reason the author seems to need to take the violence of his characters (much of it integral to the story and quite well done) and twist it. That finally turned me off. There is a new, book 4, now out. I think I'll skip it. This story ends well and the ending pretty much tells you the next story.
Read more
Helpful
Report abuse

Kindle Customer
5.0 out of 5 stars Well written and edited
Reviewed in the United States on June 5, 2021
Verified Purchase
I enjoyed all three books of the series, and I am glad that Scott didn't just end here. I look forward to the next book. The books were well edited which seems more rare lately so I appreciate it, and I feel it necessary to point out. It is nice not reading a book knowing the word on the page is the one intended and not something that autocorrect replaced it with. No glaring name switches and even with the story getting a little twisted all of the characters stayed true to themselves.
Read more
Helpful
Report abuse

Aaron DiNoto
4.0 out of 5 stars Fun Ride
Reviewed in the United States on January 11, 2022
Verified Purchase
Having now read the first three books of this series I think it is safe to say I am a Jasper T. Scott fan. I would compare these books to Altered Carbon or Slab City Blues. I may be getting a little tired of the characters but it does seem like the plot development of the second and third books are a bit behind book one of the series or they are just starting to feel a little formulaic. I can say during this third book I definitely associated Alpha (alien substance/presence) with Venom as they share quite a few similarities. I do think throwing time travel into the story is a bit much and the book ended on a very Terminator note which felt like drifting further and further away from the bounty hunter vibes and baseline of the first book which drew me in. Still going to read the fourth book and possibly more.
Read more
Helpful
Report abuse

Bucko
4.0 out of 5 stars Good series!
Reviewed in the United States on August 24, 2021
Verified Purchase
I have read the first three books in the series and found them enjoyable and ever-changing while holding on to the bad story. There were a couple of slow spots in the first two books, but not as much as in many others I have read.
A entertaining read, one that I will continue in the fourth book!
Read more
Helpful
Report abuse

Jon Tichenor
5.0 out of 5 stars Good read
Reviewed in the United States on February 6, 2022
Verified Purchase
This is the third novel on the Cade Korbin stories and it's a great story. I was really interested in how Cade would overcome the bounty on his head and he accomplished that feat with enough challenges to make the story very interesting. I'll definitely get the next story in the series.
Read more
Helpful
Report abuse
See all reviews

jason Smith
5.0 out of 5 stars Scotts best of the series yet
Reviewed in the United Kingdom on May 31, 2021
Verified Purchase
I think this book starts the important process of winding up this particular storyline of Cade Korbin chronicles and starts the ideas off for his future escapades, which in many ways starts the process for Cades redemption in his own eyes, as always he has a few run ins with the bad guys along the way especially Nadine who is getting to be a serious pain in the ass. along with his daughter who I have to say I am beginning to loathe nearly as much as the fore mentioned Nadine, having said all that the symbiotic relationship he is developing with Alpha is a real bonus and hopefully is expanded in a positive way in book 4 I think we need to see the good in Cade Korbin mixed in with the badass Bounty Hunter Assassin.. Not to much though Scott ;)
Read more
Report abuse

Nigel Frankcom
5.0 out of 5 stars Hard to put down..
Reviewed in the United Kingdom on May 14, 2021
Verified Purchase
A very entertaining tale. Likeable characters, a great plot and some epic twists. I’m keen to see where the sequel goes.

Peter
4.0 out of 5 stars Still great
Reviewed in the United Kingdom on May 27, 2021
Verified Purchase
Couldn't put this one down. It's better than the previous two although some small holes in the plot logic peeped through. Great action and characters but our hero is way less talented than advertised.
Read more
Report abuse

David
5.0 out of 5 stars A good follow up
Reviewed in the United Kingdom on May 18, 2021
Verified Purchase
A good follow up from the first books with an interesting plot.
Read more
One person found this helpful
Report abuse

T. Tickner
5.0 out of 5 stars Superb!
Reviewed in the United Kingdom on May 21, 2021
Verified Purchase
What a read! A great continuation of the previous books.

I just love the way the story weaves the different threads, especially when they meet again having diverged previously.

September will be a long wait for Book 4.
Read more
One person found this helpful
Report abuse
See all reviews