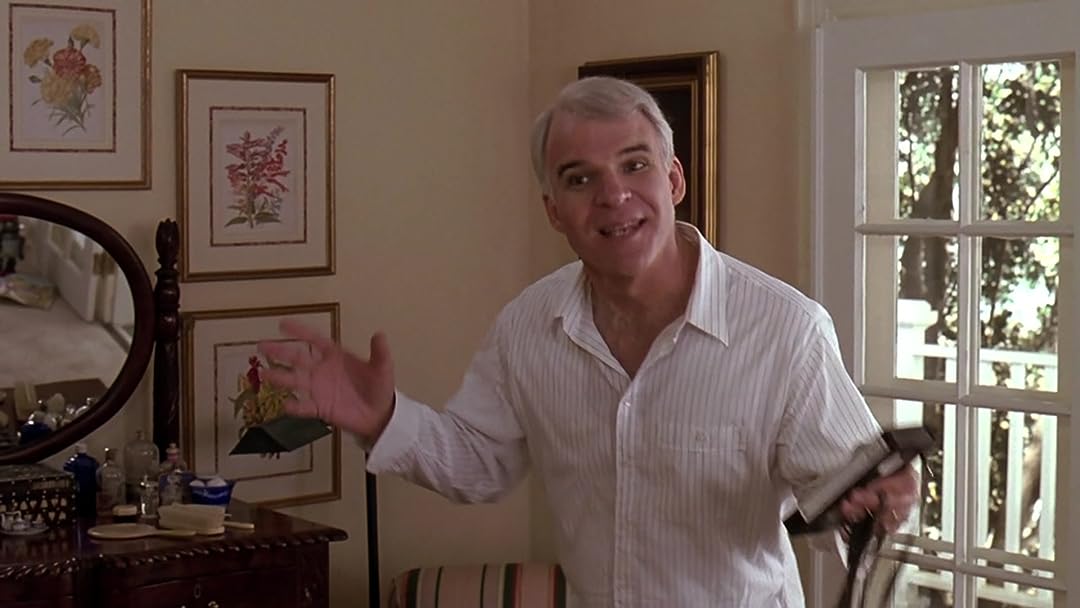 (2,177)7.02 h 4 min1989X-RayPG-13
Home sweet home? Director Ron Howard's warts-and-all tale of an extended family: their fears, dreams, fights, and that kid who likes to put a bucket on his head and ram the walls.With Rick Moranis, Keanu Reeves.

C. HortonReviewed in the United States on April 12, 2020
5.0 out of 5 stars
An extremely good movie
Verified purchase
This movie, even though it does get pretty good ratings, I still think it's underrated. The best performance--and one that I think was truly Oscar-worthy--was that of Jason Robards. He holds such gravitas that his presence--both for his humorous turns and for his serious turns in this movie are what anchored this movie. Same goes for Diane Wiest--who I believe was nominated--she was outstanding in this. And kudos to Steve Martin for being "the star" of the movie but stepping back where necessary and allowing these other actors to shine.

This movie is miles ahead of the related TV series Parenthood, which Ron Howard was also involved with. The TV series was utter useless dreck in this reviewer's opinion--it was too heavy, too depressing, and the "comedy" bits seemed forced, were not funny, and felt out of place. While this movie, in contrast, was more comedy-centric, with some drama thrown in for balance, and here Howard achieved the perfect mix.

So plot-wise it's four sub-stories of Martin and his character's siblings--Martin, his two sisters (Wiest and Harly Jane Kozak), and his wayward younger brother (Tom Hulce). They all have some sort of life issues, and the movie is centered around a holiday (or birthday) get together and takes turns following each couple as they deal with their respective issues.

Martin's character has a son who may have some sort of ADHD or learning issue--or maybe he's just a normal kid going through normal childhood bumps in the road. This is affecting Martin's job and to some extent his marriage. The sister played by Kozak and her husband (Moranis) are over-achieving yuppies who insist on the same "success" for their 3-year-old daughter and are prepping her at that too-young age. Hulce, the brother, is failing one get-rich-quick scheme after another, and is only visiting this get-together to borrow more money for the next scheme. Finally--and perhaps the best sub-plot, is Wiest's issues. Her 12-ish son (played by a very young Joaquin Phoenix) is going through a tough time because the father left Weist as a single parent and doesn't want anything to do with any of the family. Wiest's daughter, (Plimpton) is in her late teens and is dating a well meaning but currently nowhere-bound guy (Keanu Reeves). Most of the best humor revolves around this story. Wiest and Plimpton are at each others throats due to both general teen angst and the fact that it's tough being a single parent.

So there you have it--all of the plotlines keep the pace going and keep the viewer's interest high, and they keep the tears of laughter coming as well as the occasional tear of emotion from the drama. Very well done movie.

Just meReviewed in the United States on June 9, 2021
4.0 out of 5 stars
No Digital Copy
Verified purchase
The product description claims that it includes a Digital Copy for this film, however, the digital code was looooong expired.

That being said, the blu ray copy is much clearer than my old stanky dvd....but if I miss the old grainy image a dvd is also included 😉

I have always liked this movie. When we were kids we used to sing the diarrhea song (if you've seen it then you already know).

It's a compelling, funny, heartwarming, heartbreaking movie. It is full of angst - that's, I think, the most accurate descriptor; puberty, teen angst, single parenting, it explores different philosophies of the time, the struggles of aging...you name it. If you are a human (and i presume you are) you will definitely identify with at least one storyline.

Would I recommend this film? It depends. This is NOT exactly a Masterpiece of Cinema like you might expect from Tarkovsky or Kurosawa. This is a Steve Martin movie. Although it is probably one his more complex stories, it's still pretty basic. Keanu Reeves is complete rubbish in this one but pretty much the rest of the cast is great.

If you're in the mood for a nice, safe, angsty, 90s ('89 really but feels like the 90s) type movie, with a huge All-Star cast, with multiple story lines that all weave together and create the complexity and chaos of a real family....then, Yes, I would recommend this film. It's adequate to fill that bill.

R. DonnellReviewed in the United States on August 18, 2021
5.0 out of 5 stars
A classic in every sense of the word
Verified purchase
Parenthood is one of those films thats perfectly capsulizes a subject while allowing the actors to shine in their own comedic light. This is a film about a family where the father, Steve Martin, is feeling the strains and challenges of raising kids, with one in particular that has an emotional issue. Sounds serious but leave it to Steve to make it a thought-provoking-while-you-laugh parenting adventure. Mary Steenbergen is perfectly cast as the calm steady mom who lends the voice of reason and stability in all things parenting. Then there's grandma, Steve's mother, who in a seemingly nonsensical, yet actually an eloquent summary, states the true nature and essential joy, of parenting, a joy rarely recognized at the time, but upon reflection in later years. Her comment is the bow on the top of this cinematic gift. After I watched this for the first time in the 1990's when my kids were still young, I always kept one simple phrase in mind - "these are the good old days". I now remind my grown children of that phrase and to think of it when navigating the wild ride of their own parental roller coaster.

[[ASIN:B00D7AM2PQ NEW TRICKS COLLECTION, SEASONS 1-5]], [[ASIN:B00PKPGMKC New Tricks Collection: Seasons 6-10]] Cold Case comedies looks at parenting from the individual's point of view, creating surrogate a family network of support in the workplace for talented alcoholics, one in recovery sort of, who pursue individual goals without the burden of caring about anyone else but themselves.

[[ASIN:B000MRNWK6 Parenthood (Special Edition)]] facilitates understanding of human weakness, selfishness, vanity, greed, self aggrandizement, and pursuit of own dreams at the sacrifice of children, grandchildren and nameless innocent bystanders as in

Parenthood offers a more hopeful outcome, though the end credits do reveal a Down's Syndrome baby from the Mary Steenburgen character's desire to hold onto a fading role as "mother" when her youngest goes off the school.

2007 interviews with writers, actors, director Ron Howard are informative as the the maturation of attitude from youthful exuberance when the film debuted in 1989 to the reflective musing of the entire cast in looking back at their work ensemble.

5* thoughtful comedy complements [[ASIN:B07Z74DJBF A Beautiful Day in the Neighborhood]] Tom Hanks and
[[ASIN:B07D591ST1 Won't You Be My Neighbor?]] Mr Rogers biopic life dedicated to befriending children and
[[ASIN:B002SF9YNO Departures]] Oscar Best Foreign film learning forgiveness for parenting in absentia, poignant comedy, child abandoned age 6, grows up trying to please absent parent an enigma pursuing own life separate from duty, child as adult loses job, spouse departs, cobbles together a network of support mentors as surrogate family: employer and bath house owner, learns ritual meditation, finally achieves self forgiveness. Realizes it is not a deficiency in self as unlovable, but a problem in the parent which elicits adult child compassion.
One person found this helpful

bobbie13Reviewed in the United States on October 4, 2019
5.0 out of 5 stars
A 1989 Comedy Movie
Verified purchase
I love these 1980’s movies! I love Amazon Prime videos, including 80s films; tv shows like Family Ties, and game shows like Family Feud with the late Richard Dawson. The BEST PART- NO commercials! Sorry for not such a good review but I wanted to let other people know about watching Amazon Prime videos, free when you have Amazon Prime Membership. I had a membership for years and didn’t give Amazon videos a chance until a year ago. I regret not trying Amazon videos sooner. I highly recommend watching the original tv “Dark Shadows Collection” very exciting, like reading a book that you can’t put down.
2 people found this helpful

DEPLORABLE MIKEReviewed in the United States on January 26, 2020
5.0 out of 5 stars
ANOTHER GREAT MOVIE FROM RON HOWARD
Verified purchase
Ron Howard has a way of making real life events exciting and fun to watch. This story of the typical yet disfunctional family lands close to home for many of us. The Extended Buckman family is no different than many of our own familys and our friends familys. Like the Buckmans we all have the black sheep in our familys and those with emotional issues. Ron Howard and a All Star cast make this one of our familys favorites. This is just another materpeice from who I consider the best director in Hollywood.

LindsayReviewed in the United States on July 12, 2021
3.0 out of 5 stars
I wouldn't recommend, but it is alright
Verified purchase
This movie, I seen it come up in some books I've read. Couple of them actually. So I figured must be a good movie. But it wasn't really. I kept thinking we would build up to the plot. But never did the movie ended before that happened. However showing all the families and what's going on shows that everyone no matter what has some messed up situations and nobody lives a perfect life. So it was still alright to watch but there is no way I'll be running to it again to watch.

PJonesReviewed in the United States on November 13, 2020
5.0 out of 5 stars
My favorite movie EVER.
Verified purchase
I’m 65, but this movie is the closest to my heart of any I’ve seen. The humor was just off the charts but it was also serious, sad, joyful. I watch it at least once a year because it is so, so relatable to your families, the family you came from and the families you raised. This is an all-star cast and everyone in it gave a superb performance. I can’t say enough about this movie, and it’s the only time I’ve ever felt compelled to write a review on one. Don’t miss this.
See all reviews
Back to top
Get to Know Us
Make Money with Us
Amazon Payment Products
Let Us Help You
EnglishChoose a language for shopping. United StatesChoose a country/region for shopping.
© 1996-2021, Amazon.com, Inc. or its affiliates