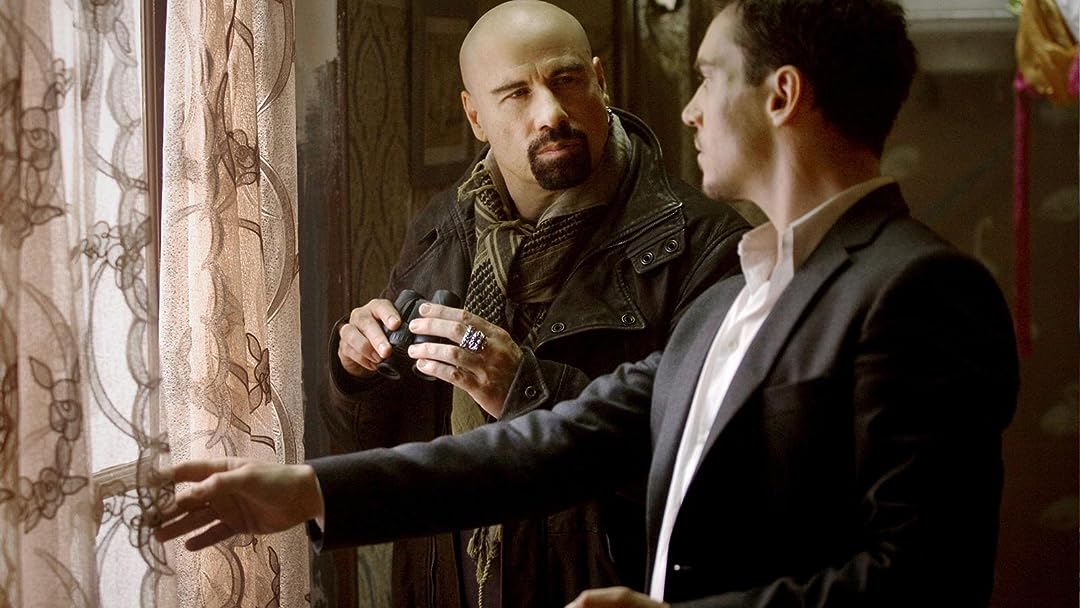 From Paris With Love

(1,975)
6.41 h 32 min2010X-RayR
A low-ranking intelligence operative (Jonathan Rhys Meyers) working in the office of the U.S. Ambassador in France takes on more than he bargained for when he partners with a wisecracking, fast-shooting, high-ranking U.S. agent (John Travolta) who's been sent to Paris to stop a terrorist attack.

Mark WeyersReviewed in the United States on July 28, 2019
5.0 out of 5 stars
5 Star if you know what you're getting yourself into
Verified purchase
From a purely objective sense -- this movie is not 5 star. It's probably 3 (which closely reflects the average IMDB of, what, 6.5?). The action is "over-the-top" and unrealistic (double wielding automatic weapons with no recoil? Suppressors that magically make the KABOOM of a gun into a "plink" noise? One lone man that is a superior marksmen while all these other "certainly not regular thug/gang/criminal types" can't aim worth a hill of beans?)

But, if you understand that this isn't some Bourne-wannabe or any other "super secret agent" action flick, and get that the movie *knows* it's poking fun at itself -- there's some cool action scenes and pretty funny moments. Reese trying to stick the bug to the desk with gum and failing twice; the guys getting shot and continuously falling down that circular stairwell; popping the friend in the head at dinner; yeah, it's quite comical when you realize the movie's intent is not to be taken as seriously as Bourne, or Bond, etc.

Travolta as Wax is awesome. Just enough campy, cheesy, narc behavior with complete and total dominance to be likeable, without being "gag-me-with-a-spoon" macho-bravado.

Enjoy the movie -- as long as you don't think it's even remotely realistic.

Richard JensenReviewed in the United States on November 13, 2021
5.0 out of 5 stars
WHAT are you thinking? No, don't bother with any of that....
Verified purchase
This is not a "cerebral" flick. It's not a thinking-person's "drama." It's just high-octane, ridiculously over-the-top action that Travolta carries superbly well. A slightly pudgy Travolta is a much more believable action star than a pudgy Steven Segal, and in this case there's light-years of difference between the two.

Well-written with great (one-dimensional) dialog. This flick is what it is, and it's right and tight throughout. Do not expect "consistency" or "reality" here, because that's not what this flick is. It's a genera that isn't about "thinking it through." The genera is relentless (and realistically ridiculous) action. Period. And this delivers better than the vast majority in the genera.

All that said, you get more than you bargained for here, because the story line actually develops in a very engaging way, and the ending is gut-wrenching, even given (because of) the ride you've just gone through.

I rarely give a five-star rating. But when a flick does its genera RIGHT, which is rare, it needs to be acknowledged that it stayed between the lines and drove you (fast) across the finish line. This thing gets it done!
2 people found this helpful

runbeiReviewed in the United States on August 1, 2021
5.0 out of 5 stars
A great flick if you can suspend your disbelief - ALL OF IT
Verified purchase
Wonderfully funny film with all of the finely felt sensibility of a comic book your mother wouldn't have let you read in a million years. I remember Mom throwing away my favorite Tex Ritter record, in 1945 when I was three. Well, "Blood on the Saddle" may be distant in time, but it's crafted from the same artistic materials as "With Love From Paris." There wuz blood on the saddle, blood on the ground, great big puddles of blood all around. (You can hear it on YouTube.) Anyway, Travolta and Rhys Davies give perfectly pitched performances. There oughta be an Oscar for flix like these: Goon, Paris With Love...
2 people found this helpful

Robert HayesReviewed in the United States on October 31, 2014
3.0 out of 5 stars
Tonally jumbled but fun action romp that survives on John Travolta's performance
Verified purchase
From producer/writer Luc Besson comes another action movie with American leads set in Paris, and while it is largely competent from a technical standpoint, there are some jarring tonal shifts which may not sit right with everyone. Jonathan Rhys Meyers plays James Reese, the personal assistant of the American diplomat in Paris. He's excellent at his job, but he longs for a more exciting life as a spy. Enter Charlie Wax (John Travolta), who is everything the straight-laced Reese isn't: first and foremost an actual secret agent, and in general a rather aggressive personality. The two of them team up to finish a job, and prove to Reese's boss that he can cut it as a "member of the club."

From the first few frames, it was clear that this would be a well-shot movie (from Pierre Morel, who also directed TAKEN), but upon hearing Jonathan Rhys Meyers open his mouth I lost a lot of hope that it would be a well-acted one. He was uninspiring and uncharismatic in the worst way possible. Thankfully, John Travolta showed up to chew the scenery and add some life into what was essentially a bargain-basement spy thriller with great production values. Even though it seemed like he was in a completely different movie, his presence lightened the mood a little bit, even if he didn't really have much chemistry with Meyers. If there's one saving grace about this film, other than having technically proficient action and good cinematography, it was Travolta.

Pausing a moment to discuss the plot, I thought that it was rather formulaic and rote in its approach to this rather overdone genre. I get that the title is a sort-of nod to James Bond, but this can't hold a candle to that franchise. Not only that, but the plot didn't make much sense either, and character motivation was either muddled or non-existent, particularly with a third act twist which reveals who the true villain is. Even though this is an over-the-top action movie with elements that are a bit removed from reality, the least they could have done was to try and make it somewhat coherent.

However, despite all of the shortcomings there are enough elements in the film to give it a loose recommendation. John Travolta is truly awesome in his role as the fast-talking secret agent with an itchy trigger finger and a warped sense of humor. There are also a number of well-executed action and fight sequences which don't hold back in terms of what they show (as opposed to something like TAKEN). Pierre Morel is a master behind the camera, and it shows. Also, since this movie is set in Paris and stars John Travolta, they go for an easy (but still funny) Pulp Fiction joke. Overall, fans of mindless action should find a lot to enjoy here, while everyone else would be better served watching a Bond film or checking out one of Luc Besson's other, better productions.
16 people found this helpful

Jeffrey SeelmanReviewed in the United States on September 26, 2016
5.0 out of 5 stars
This Is a Fantastic Movie
Verified purchase
This movie has everything that an action movie could ever want. Jon Travolta chews the scenery as the CIA operative that goes after the usual meaningless terrorists that have nothing better to do than kill innocent people. Yes, he is way over the top, and the movie is not realistic, but I thought that that was half the fun of it. A smart mouth talking, wisecracking Central Intelligence Agency operative that has no better interest than the security of the United States. If you like espionage and spy movie is as much as I do, and believe me, I am very particular about quality in my movies, and I wholeheartedly recommend watching this one. All the acting is excellent from all the actors. Great views of Paris. Super high body count of bad guys. What more could you want, besides may be some popcorn or pizza. Highly recommended.
10 people found this helpful

brownilReviewed in the United States on March 28, 2020
1.0 out of 5 stars
Just awful in every way
Verified purchase
Absurd "action" movie requires you to suspend your intelligence at the door. Really bad in every way, from casting (Travolta? Really?) to plot (none actually) to ridiculous shootout and beat-down sequences.
5 people found this helpful

Todd M.Reviewed in the United States on October 7, 2018
4.0 out of 5 stars
It’s so forgettable we forgot we saw it.
Verified purchase
Action is what it’s all about so disengage your brain because absolutely nothing is believable in this one. Travolta is his typical one dimensional character who never runs out of mouth or bullets. If you can’t see where this one is headed then you might find it interesting as the big climax approaches. The dialog is so off the wall that it’s unintentionally humorous and the whole movie is just pretty silly… but the action scenes kept me hooked.
6 people found this helpful

joel wingReviewed in the United States on November 7, 2021
3.0 out of 5 stars
John Travolta wants to take Jonathan Meyers on a wild ride
Verified purchase
From Paris With Love is an odd couple-spy-action flick. Jonathan Meyers plays the straight guy and John Travolta is the loud mouth loose cannon. Even though Travolta is supposed to be a good guy he acts like some of his past criminal roles like the ones in Face/Off, Swordfish or The Taking of Pelham 123. The movie is funny because a lot of the first half is Travolta killing people and taking names with Meyers just looking confused about what’s happening. There’s a nice twist in the middle as well. It all makes for a very enjoyable film.
One person found this helpful
See all reviews
Back to top
Get to Know Us
Make Money with Us
Amazon Payment Products
Let Us Help You
EnglishChoose a language for shopping. United StatesChoose a country/region for shopping.
© 1996-2022, Amazon.com, Inc. or its affiliates