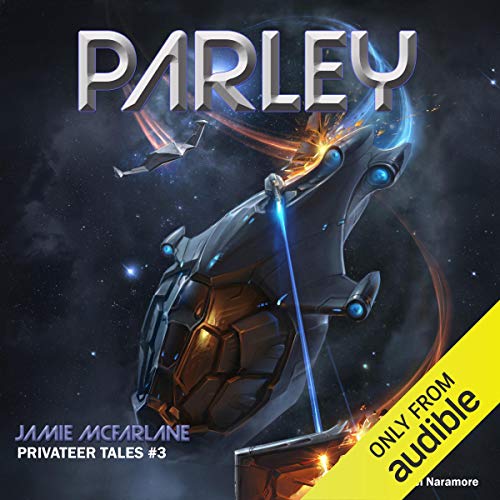 Liam Hoffen and Nick James are back in the next, exciting installment of Jamie McFarlane's Privateer Tales.

After fighting space pirates and rescuing a damsel in distress, nothing sounds better than shore leave at Puskar Stellar on Mars where Liam can reconnect with his girlfriend. But neither their newest crew member, Marny, nor the Mars Protectorate Navy is ready for them to spend much time relaxing.

Their old nemesis, Harry Flark, found a new mining station to pillage and the crew of Sterra's Gift has been hired to transport a covert operative into Flark's lair. This is the perfect opportunity for them to set things right if it helps to bring him down. The big problem comes when Liam and Nick discover Flark is expecting them and has no intention of letting them get away with their lives.

Like white knights on silver steeds, Liam, Nick, Marny and a passel of new friends fight their way across the solar system, making a name for themselves and their mission.

Andy McKinney
VINE VOICE
4.0 out of 5 stars A good yarn
Reviewed in the United States on June 12, 2021
Verified Purchase
We don't get much of hard science fiction these days, at least not like this. We get to spend a fair amount of time with our belter characters (they call themselves 'spacers' ie-people born in zero gravity. They live in the asteroid belt) as they move about outside their ship.
The characters are good people, people with strong morals and a sense of duty to others. This is refreshing.
I found the plot points believable. I especially like how the author had developed the society in the asteroid belt, the small mining communities, and the people who live in them. Also, the larger society, the big nations that vie for influence in the far corners of the solar system.
I am enjoying the series so far and plan to continue. Lucky for fans, the series is huge.
Read more
Helpful
Report abuse

Char
5.0 out of 5 stars It's a love story and privateers vs pirates
Reviewed in the United States on November 5, 2021
Verified Purchase
To start with,, it's a love story. Liam, nick, and marny are back. Liam gets to see Tabby. Nick is cool under fire and gets a girl friend. Fun, exciting, bonding of the team . There's a tug boat and they wind up on mars. Then they have to take a navy operator on a mission and the fun begins. Well, it probably wasn't much fun for Liam and the crew. Tali and jordy get to go along. They make a mess of some valuable assets (ships, stations) in some amazing battles when the y go after a particularly mean pirate. And the saga shall continue in the next book I'm sure. Enjoy...
Read more
Helpful
Report abuse

Morlock
5.0 out of 5 stars Great Hard Sci-Fi
Reviewed in the United States on June 20, 2016
Verified Purchase
Privateers is a good read with well-developed characters and an entertaining story line. It is the first series that I have read in a very long time that had well developed foundational science on which the rest of the story framework is based. The use of AI, smart fabric, and Internet of things, was very well integrated into the story and extended into the future. The only nits I have to pick with the series are the improbable interrelationships between some of the characters, the illogical expansion from the Milky Way to the Dwingeloo galaxy, which is 10 million light-year away from Earth. There are many other choices much closer, such as Andromeda, at 2.5 million. Additionally, it is unlikely that the 100 to 400 billion stars within the Milky Way could have been explored. One last nick pick, was the reference to the Marny Bertrand, a former Marine, who is referred to as a Master Chief, which is a Navy rank. The correct rank for a Marine E9 would be Master Gunnery Sergeant, or Gunny.
Read more
5 people found this helpful
Helpful
Report abuse

Mvargus
TOP 1000 REVIEWER
4.0 out of 5 stars Series continues to impress.
Reviewed in the United States on September 30, 2014
Verified Purchase
Wow, Jamie gets a little better each time. The characters are growing into dynamic entities who you can cheer for or hiss at depending on their role in the story.

This story is almost a direct sequel to Privateer tales Book 1, with some cameos from characters in book 2. The cameos don't really add much, but the return to Liam, Nick and their ship is a definite step in the right direction for the narrative. Liam is a solid focal character and his hatred of pirates makes sense.

The action scenes are decent, but not all that special. Jamie seems to jumble the actions together until the characters aren't sure what's going on, and that means the descriptions can be a bit tangled. It's not a major problem as this story is definitely character and plot driven, but it did become noticeable.

Overall, this is the best of the series by a fairly new author. The strong characters and interesting plot make for an enjoyable and quick read. My only major complaint would be the intelligence of many of the characters. This story is filled with intrigue and backstabbing, but most of the characters blunder into multiple situations without proper preparation.
Read more
7 people found this helpful
Helpful
Report abuse

Kort
HALL OF FAMETOP 100 REVIEWER
5.0 out of 5 stars Boom Goes The Dynamite
Reviewed in the United States on May 23, 2020
Verified Purchase
Every installment of The Privateer Tales notches up the action and character development. Liam, Nick, and the rest of the crew keep finding trouble and inventive ways to somehow get out of seemingly impossible situations alive. Book 3 is very different from the origin tale of book 1, and Parley will reward current fans and those that enjoy good sci-fi. As of now, I've read all the way to book 18 of this captivating series, and am hoping it never ends. Now if only they could fix those septic systems...

F. Hankic
4.0 out of 5 stars Good Continuation - Looking forward to more
Reviewed in the United States on March 13, 2015
Verified Purchase
This is a continuation of book one "Rookie Privateer" and it picks up where the previous book left off. Being used to the writing style, this time around, I enjoyed this book from all the way through. The characters are likable, the bad guys are despicable and I find myself invested in to the series and looking for more.
The series feels a lot like a computer game to me. The characters complete missions, get loot and more money and use it to upgrade their gear and take on tougher opponents. Being a gamer, I love that aspect of it. The only thing that is missing, for me, is the conclusion. The end of the book is not wrapping up the final balance of the events that took place and that is my only gripe with this book.
If you read and liked the first book, you will like this one at least just as much. If you haven't are just considering reading it, I think that it is worth picking up. Start with the first book in the series though.
Read more
One person found this helpful
Helpful
Report abuse

BookHunt
5.0 out of 5 stars Bingo! perfectly written action Sci-Fi story. Great follow up to series.
Reviewed in the United States on September 6, 2014
Verified Purchase
Now that is a fun Sci-Fi read! Holy Carp!!! It had everything I was looking for the third book in the series...although i don't really count "Fool Me Once" as the second book since it has nothing to do with the main characters I love. There was tons of action. There was enough building up of crew, gear, and ship that I like. The fights were really well written and had me on the edge of my seat a lot.

If you liked the first two...this is a must buy. you will not regret it.

I really hope there is a fourth book already being written, and a 5th in the wings. I don't think I can wait until next year for another one! Just please follow the main Characters! No side tracks please...if you do you will own me another book very soon after with them.
Read more
One person found this helpful
Helpful
Report abuse
See all reviews

Mr. Mark Jones
4.0 out of 5 stars Awful. but great. I am on book 4...
Reviewed in the United Kingdom on March 24, 2016
Verified Purchase
The books are all written in first person. as in "I did this, said this" etc which I struggled with in the beginning. (So is Jane Eyre, but then Charlotte Bronte is able to carry this off.) The writing is improving (or I am becoming immune) from the first book, which was awful. So why am I still reading? McFarlane is a good story teller, and some of the sections are genuinely exiting. He still gets a little bogged down in his own detail sometimes but this book gallops along most of the time, and it is a sort of guilty pleasure.
Read more
Report abuse

Kindle Gailforce
5.0 out of 5 stars Great action novel.
Reviewed in the United Kingdom on June 20, 2017
Verified Purchase
Liam and his crew once again volunteer for a whole lot of trouble with new friends and old enemies. I am always amazed by Jamie's detailed descriptions of combat situations and space ship movements - it's almost like he's there they are so good. Looking forward to book 4.
Read more
Report abuse

PAUL MITCHELL
5.0 out of 5 stars Good book
Reviewed in the United Kingdom on December 7, 2018
Verified Purchase
Very good read. Flows on from previous books. Couldn't put it down already have next one ready to read can't wait..
Read more
Report abuse

Peter Richardson
5.0 out of 5 stars Another great installment
Reviewed in the United Kingdom on December 4, 2015
Verified Purchase
The 1st book started slow but soon found a good pace and with each following book the author grows in confidence and the series goes from strength to strength.
Read more
Report abuse