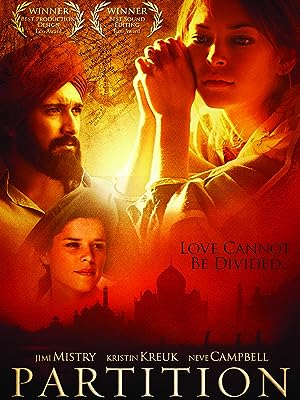 (99)
6.91 h 56 min2007R
With its rich tapestry of stories and characters based on real people and events, Partition is a moving and timeless tale of innocent people struggling to find happiness in treacherous times.

Gary L. StanleyReviewed in the United States on July 24, 2007
5.0 out of 5 stars
Excellent Historical Drama + Kristin Kreuk = 5 Stars
Verified purchase
Ordinarily, I find historical dramas to be boring, but when I learned in 2006 that this movie was being filmed I contacted Seville studios to find out when it would be released. Unfortunately, this important film was never released in the United States.

It's not often that one can learn about a historical event while enjoying the dramatic reenactment with very high-quality direction, acting, cinematography and music.

During production, the casting director was given a lot of guff for casting Kristin Kreuk as a Pakistani Muslim girl, but I'm here to tell you that she pulled it off and since she is Eurasian, fit into the part perfectly.

Oh, by the way, for those of you who only know her from her character Lana Lang on Smallville, Kristin is just as beautiful without makeup.

The film is a social commentary on the vagaries of people being judged by their ethnic origin rather than on WHO they are. This still goes on in all the Muslim countries (just look at the modern-day Sunnis/Shi'ites/Kurds in Iraq)

On top of an interesting story well told, there is also excellent cinematography and score that is just icing on the proverbial cake.

Buy this while it's available here on Amazon because the price will likely only go up in time.

PJReviewed in the United States on November 7, 2012
5.0 out of 5 stars
Thoroughly enjoyed this film
Verified purchase
I love any movie set in India and anything with Jimi Mistry. This lived up to my expectations. A very close friend of mine lived through the India/Pakistan split and told me about some of the things that happened to people and their families, so this film was of special interest to me. Beautifully filmed, excellent acting and a great story. Every Sunday I "escape" for a couple of hours by watching something I haven't seen before and this film was a great choice.
2 people found this helpful

Somhat LanodReviewed in the United States on October 5, 2015
4.0 out of 5 stars
SPOILER ALERT!!!
Verified purchase
I thought the story in this film was lovely. Definitely one of those ethnic "Romeo and Juliet" stories between an Indian Sikh man and a Muslim girl. That being said, there was no happy ending which is the one drawback of one of these films.

Kindle CustomerReviewed in the United States on October 14, 2013
5.0 out of 5 stars
Partition is AWESOME
Verified purchase
This movie was great. It provoked an array of conflicting emotions but I was left with a sense that even in the most cruel circumstances love will always prevail. I think more people should watch this movie and think about mans inhumane treatment of each other. Yet, through all of that in some there is a deep and heartfelt goodness and love of our fellow man. We should be striving toward that goodness and not away from it. I am hopeful that goodness will win out in the end, but that could just be the romantic in me. I hope I am wrong.
5 people found this helpful

Mark ShowalterReviewed in the United States on December 26, 2011
5.0 out of 5 stars
Amazing movie with some Romeo & Juliet flavors
Verified purchase
This is a hard movie to review because the performances by the leads are wonderful. The basic story or plot just doesn't come close to how well the cast tells the story. Placed against the division & creation of Pakistan is a story of a Sheik man & Muslum woman who in a very real way save each other. I can't give this movie a high enough rating or recommendation.
One person found this helpful

MEJazzReviewed in the United States on May 27, 2009
3.0 out of 5 stars
OK Movie, Silent Waters is better
Verified purchase
First of all, the movie looks breathtaking when played in an upscaling DVD player (like Toshiba HD-A35 or PS3) - it looks almost Blu-ray quality. Its worth picking up a used copy just to savor the rural/farms scenery. This movie could be much more involving if it was in Urdu/Hindi regional language than entirely English. The kind of people depicted did not use to speak English in day to day life and this makes the film feel artificial. Secondly, if you are interested in the subject, Silent Waters depict the same with much more authenticity and the way a strong message is subtly delivered.
2 people found this helpful

Robert G. RyanReviewed in the United States on June 25, 2013
5.0 out of 5 stars
Helps tou understand why there is no peace in India.
Verified purchase
It seems like a documentary written as a story. Hatred for Muslims vs Hindis, Sikihs and others.
I enjoyed the story line and got a history lesson at the same time. Made me google Partition and watch documentays to get a better understanding of what it was.
See all reviews
Back to top
Get to Know Us
Make Money with Us
Amazon Payment Products
Let Us Help You
EnglishChoose a language for shopping. United StatesChoose a country/region for shopping.
© 1996-2021, Amazon.com, Inc. or its affiliates