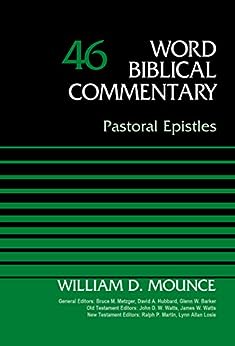 The Word Biblical Commentary delivers the best in biblical scholarship, from the leading scholars of our day who share a commitment to Scripture as divine revelation. This series emphasizes a thorough analysis of textual, linguistic, structural, and theological evidence. The result is judicious and balanced insight into the meanings of the text in the framework of biblical theology. These widely acclaimed commentaries serve as exceptional resources for the professional theologian and instructor, the seminary or university student, the working minister, and everyone concerned with building theological understanding from a solid base of biblical scholarship.

Immerse Yourself in the Word

The Word Biblical Commentary series emphasizes the analysis of textual, linguistic, structural, and theological evidence, providing judicious and balanced insight into textual meaning. Each volume is an exceptional resource for theologians, students, ministers, instructors, and anyone concerned with building theological understanding from a solid base of biblical scholarship. Each volume includes the following detailed sections:

Bruce M. Metzger (1914 – 2007) was a biblical scholar, textual critic, and a longtime professor at Princeton Theological Seminary. Metzger is widely considered one of the most influential New Testament scholars of the 20th century. He was a general editor of the Word Biblical Commentary (1997 - 2007).

David Allan Hubbard (1928 – 1996), former president and professor of Old Testament at Fuller Theological Seminary in Pasadena, California, was a recognized biblical scholar. In addition to over 30 books, he has written numerous articles for journals, periodicals, reference works. He was a general editor of the Word Biblical Commentary (1977 - 1996).

James W. Watts is a professor and chair of the Department of Religion at Syracuse University. His teaching and research interests include biblical studies, especially the Torah/Pentateuch, ritual theories, rhetorical analysis, and comparative scriptures studies. He is a co-founder of the Iconic Books Project. He had served as the associate Old Testament editor of the Word Biblical Commentary (1997 - 2011).

Anon
3.0 out of 5 stars Great commentary but Zondervan edition = inferior physical book
Reviewed in the United States on June 1, 2019
Verified Purchase
I just thought I'd mention this for those that have bought other volumes of the excellent Word Commentary series. When Thomas Nelson was publishing these, they were a proper hardback with Smyth sewn signatures and an actual dust jacket. When Zondervan took over, the binding is now plain glue, unsewn, and the graphics that used to be on the dust jacket are just printed on a cheap hardcover. My copy came with many of the pages stuck together that I had to peel apart. Therefore, if you care about such things, I'd try to hunt down a previous printing of this commentary. So, for content: 5 stars Physical plant 1 star
Read more
6 people found this helpful
Helpful
Report abuse

sjplus4
5.0 out of 5 stars Wonderful commentary on the pastoral epistles
Reviewed in the United States on October 7, 2017
Verified Purchase
Wonderful commentary on the pastoral epistles. Excellent scholarship but not over my head. It was so helpful for me as I was preparing to teach a Bible study but my Greek is not yet fluent so the interpretational help by William Mounce was perfect.
Read more
2 people found this helpful
Helpful
Report abuse

Amazon Customer
5.0 out of 5 stars A great buy
Reviewed in the United States on May 12, 2020
Verified Purchase
Great commentary with Greek exegesis but one doesn’t have to be an avid Greek scholar to take advantage of this author’s work. Usually a verse by verse study. Somewhat pricey but worth it.
Read more
Helpful
Report abuse

tom
5.0 out of 5 stars Excellent
Reviewed in the United States on May 29, 2017
Verified Purchase
Mounce at his best!
Read more
Helpful
Report abuse