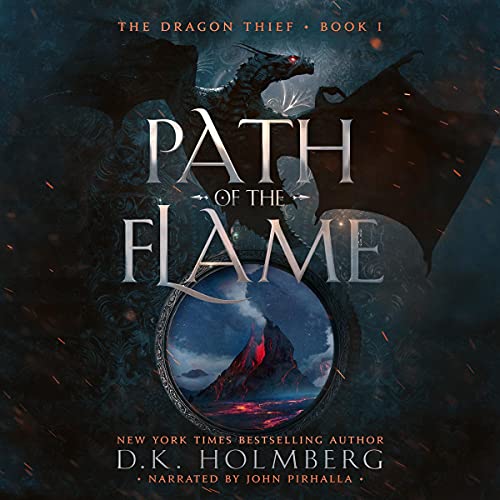 Path of the Flame: The Dragon Thief, Book 1

It will take a thief to stop a thief.

Zarinth is a dangerous city at the edge of the kingdom, illuminated by the constant fire of the nearby volcano Ishantil. For thief Ty, it’s more than a city filled with valuable ancient dragon relics. It’s the home he could never leave.

When Ishantil threatens to erupt and put the city in chaos, Ty wants one last score before finally leaving it - and his past - behind. All while the notorious Dragon Thief chases the same prize.

The Dragon Thief has a reputation for a reason, but Ty begins to think there’s more to the job than just the prize.

Success means more than freedom. It means he can buy the answers he really wants. And it just might save the city from destruction.

Packed full of action and adventure, Path of the Flame is the beginning of a brand new epic fantasy adventure.

4.3 out of 5 stars
4.3 out of 5
161 global ratings
How are ratings calculated?
To calculate the overall star rating and percentage breakdown by star, we don’t use a simple average. Instead, our system considers things like how recent a review is and if the reviewer bought the item on Amazon. It also analyzes reviews to verify trustworthiness.
Top reviews

James Sibray
3.0 out of 5 stars Decent Read
Reviewed in the United States on July 20, 2021
Verified Purchase
Book was okay, I felt as if this could have been condensed down and been a better read. There was a lot of times I skipped paragraphs because the content didn't add anything to the story or was repetitive. Author didn't really develop the supporting characters much which I assume will come with the next book? I have read numerous other books from the author but this one didn't quite match up to the others.
Read more
5 people found this helpful
Helpful
Report abuse

Andrew
3.0 out of 5 stars interesting new world
Reviewed in the United States on August 31, 2021
Verified Purchase
The world building in this book is quite good. A city, a kingdom, a religion, a family. I enjoyed this read, though Ty bugs me, he’s a self centered twist for most of the book, more in line with a 16 year old, though I get the feeling he should be in his twenties (I didn’t catch his age of the author mentioned it). He seems to be maturing a bit by the end of the book, so hopefully he will be better in later books.
Read more
One person found this helpful
Helpful
Report abuse

Cindy
5.0 out of 5 stars Looking forward to the next in this series
Reviewed in the United States on July 25, 2021
Verified Purchase
Granted it took me a little while to get into this only because I just finished another series by the same author That I thoroughly enjoyed. Ty, I believe, is the main character And I'm looking forward to seeing What happens next. Unfortunately I will have to wait till August although August is only 2 weeks away .....
Read more
One person found this helpful
Helpful
Report abuse

Carole Eshenbaugh
5.0 out of 5 stars Good start
Reviewed in the United States on August 29, 2021
Verified Purchase
This story proves to be a good adventure, magic, dragons (well sort of) and a young man on a quest. This was like the opening salvo, twist at the end that leads you to the next book.
Read more
One person found this helpful
Helpful
Report abuse

Beba
5.0 out of 5 stars Great new series!
Reviewed in the United States on July 14, 2021
D K Holmberg always delivers! It's about a thief, dragon relics, a volatile volcano, a Priesthood and a dragon egg. I love how the author build the pace, step by step, more and more intricately, drawing one into the story..The plot keeps evolving, keeping one guessing right to the end. Ty is left to fend for himself when his parents mysteriously disappear. He becomes a thief in the hopes of amassing funds to help locate them. But the imminent eruption has him questioning whether to leave or stay, on the off chance his parents return. Fate takes a turn and he is forced to find an illusive dragon egg to barter for the release of his friend. Ty is not the only one looking for it, the infamous Dragon Thief seems to always be one step ahead of him, as Ty tries to find the egg and expose the Dragon Thief. But his quest leads Ty to unexpected events as he discovers the truth behind the Dragon Thief and his purpose. A wonderfully elegant story, lots of twists and unexpected moments, which make this a great start to a series!
Read more
3 people found this helpful
Helpful
Report abuse

Lee S.
5.0 out of 5 stars Great easy read with great characters and plenty of action!
Reviewed in the United States on July 27, 2021
In the interest of full disclosure, I was provided an Advanced Readers Copy in exchange for an honest and open review of the book. I intend to purchase this book when it is available in print, having thoroughly enjoyed it.

This is the first book in a new series from the D.K. Holmberg. The book focuses on the character Tydornen, or Ty for short. Ty resides on the edge of his kingdom, in the city of Zarinth, near the volcano Ishantil, which is preparing to erupt over the course of the book. The book covers events largely within approximately a week's span. Ty is portrayed as an aspiring thief, who took up the trade in the absence of his parents, who disappeared years ago. Ty was left alone by his brother, Albion, who took up religious orders for the Path of the Flame. Ty aspires to be like the legendary thief, the Dragon Thief, in order to accumulate wealth to help him find his parents. Throughout the book, Ty's quest evolves, as he enjoys the support of his friends.

Holmberg's story has a number of interesting twists, with well paced action. It kept my interest throughout, with well defined, distinctive characters and an intriguing plot, with a number of twists. I'm not thrilled with the stopping point of the book, because it feels like more is left unresolved than at the beginning of the book, but it is noted up front to be a series. Unlike his Executioner series, it seems like this series is going to leave more unresolved at the end of each book than some of his other series. The book ends with a clear link to a book (or series) to follow, as the story plot is unresolved. I'm not going into detail about this issue, due to spoilers, but I am left anxiously awaiting the next book in the series to see how the story continues.

This book benefits from great character development, an intriguing story, and lots of action. I don't recall any sexual content, strong language, or gratuitous violence. The book promoted positive social values like the importance of family, the importance of friendship, and perseverance. This is a great Fantasy/Young Adult read, which I highly recommend.
Read more
2 people found this helpful
Helpful
Report abuse

Stan Hutchings
4.0 out of 5 stars The story of a thief trying to find his parents and evade the authorities
Reviewed in the United States on July 19, 2021
This story is full of tension and expectation as Ty is trying to steal dragon remnants and bones while the volcano, Ishantil, is threatening to erupt any day. Ty, Olivia, and Easterly are thieves trying to steal dragon relics to sell to Bingham. Ty's brother, Albion, is a priest, and emotionally distant to Ty. Ty's parents disappeared many years ago so he is stealing for money to use to find them, or find out what happened to them. Now, one day before the eruption, he finally knows the location of a dragon egg but doesn't know whom to trust with the information: Rosen, a cruel Dragon Touched working for the king, or Gayal, a Tecal, one of the king's secret spies. Ty has continual self-doubt and distrust of everyone, though he does care about his brother and colleagues-in-theft even if he doesn't trust them. He struggles with religious belief in the Flame and his own doubts so there is a lot of dithering as he can't decide on a course of action. The ending has supernatural and religious overtones but is not a cliffhanger. It does point towards the next book in the series for the resolution of some of the mysteries.
Read more
One person found this helpful
Helpful
Report abuse
See all reviews

Charlie Girl
4.0 out of 5 stars Not as good
Reviewed in the United Kingdom on November 6, 2021
Verified Purchase
I thought this book was very long winded in the first half. I very nearly did not read on. I skimmed through pages an eventually got to the interesting parts.
Usually his books are brilliant from the off.
Read more
Report abuse

macksimise
5.0 out of 5 stars Yet another gripping series from D.K. Holmberg
Reviewed in the United Kingdom on July 17, 2021
Verified Purchase
There is only one problem with D.K. Holmberg books, they are gripping and so soon you're at the end desperate for the next book in the series. Masterful writing.
Read more
Report abuse

Rob Wilson
5.0 out of 5 stars Wonderful
Reviewed in Canada on July 25, 2021
Verified Purchase
A gripping story that is well written. D.K. Holmberg is a very good writer and I have enjoyed reading his books. I know I will enjoy this series too.
Read more
Report abuse
See all reviews
Back to top
Get to Know Us
Make Money with Us
Amazon Payment Products
Let Us Help You
EnglishChoose a language for shopping. United StatesChoose a country/region for shopping.
© 1996-2021, Amazon.com, Inc. or its affiliates