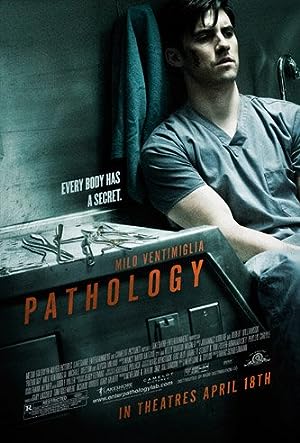 (414)
5.91 h 34 min2008X-RayR
A Harvard Medical School graduate starts his internship at one of the country's leading pathology programs only to find the other members of the team indulge in a macabre after hours activity-finding ways to commit the perfect murder.

Samantha T.Reviewed in the United States on September 13, 2012
5.0 out of 5 stars
Wow
Verified purchase
I came across this movie on IMDB and thought it sounded interesting, and I liked the actors, so I came to Amazon to rent it. BEFORE renting it I read the reviews like most of us do and was surprised because they were horrible! I thought they had ruined the whole movie for me because most of them gave away the whole plot while they were trashing the movie.

Despite the negative reviews I was curious and decided to give it a shot anyway. The reviews I read were completly WRONG!!Even knowing what was going to happen because of the spoilers in the reviews I enjoyed this movie and it did manage to shock me. I wish I had just rented the movie because I can not imagine how much more amazing it would've been had I not known some of the things were going to happen.

This movie was real, you won't finish watching it with a good taste in your mouth, but it will blow your mind if you allow it to. There is no killer chasing a big boobed girl through the woods, there is no virgin who is going to save herself and her true love at the end, these are human beings who are testing their limits. Most people said this movie was unrealistic or that the main character was not likeable enough. This movie is realistic because the main character is not likeable enough, he is not the hero he is a normal guy who makes a choice, gets in too deep, and then tries to get himself out again.

BOTTOM LINE: Rent this movie!I did and now I think I am going to have to buy it to watch it again, yes it is that good ;)

NicholasReviewed in the United States on May 28, 2020
4.0 out of 5 stars
A dark thriller, there are no heroes
Verified purchase
I find it pretty common with movies of this type, the Deadringers, the Sleep Tights, the Possessors, the movies where there is no cookie cutter hollywoodesque redeemable hero or fair tale ending that in all of these movies there are reviews that dismiss the film for being a waste of time. Every single one. So the only thing I have to say in my review is that if you have an IQ above double digits and can enjoy a flick where no one wheres a cape and everyone is a villain, where its a story being told, ignore the reviews and watch it, it's worth your time.
One person found this helpful

Cassie GraceReviewed in the United States on April 22, 2008
5.0 out of 5 stars
Better than I expected
Verified purchase
I'll freely admit that I, along with a few friends, went to see Pathology because we'd heard that Milo Ventimiglia was nekkid in a few scenes. I'm shallow, but not so shallow that I can't admit that I'm shallow.

If not for the aforementioned shallowness, I don't think this is the kind of movie I would usually see. So imagine my surprise when I actually liked it. Yes, it's extremely gory and twisted, but there's something fun in all that. The cast clearly had a blast with their roles, it's easy to imagine outtakes with the actors playing around with some of the more disgusting props.

If you don't take the movie too seriously, it's actually quite enjoyable, and even at times rather thought-provoking. As we left the theater, a discussion was struck up about who we would kill if we could get away with it. All in jest, obviously. (A popular answer "Whatever genius was in charge of marketing this movie." It's only playing on about 45 screens in the entire country.)

Admittedly, this is one of those movies where you're either going to love it or hate it, no middle ground. It all depends on what you're into, really.

And on one final shallow note, if you're a Milo Ventimiglia fan, let's just say you won't be disappointed.
32 people found this helpful

Amazon CustomerReviewed in the United States on June 11, 2020
4.0 out of 5 stars
Doctors who solve each other's murders
Verified purchase
I see a lot of people didn't like this movie, but to me it was fun and sickly delicious. I was really surprised at the end how the one doctor suddenly became involved with the murders. This was definitely different from alot of other movies and I liked how it wasn't all guys who were involved.

NHMovieLoverReviewed in the United States on June 23, 2019
4.0 out of 5 stars
Original and deviously playful
Verified purchase
Pathology reminds me of Flatliners with a devilishly twisted set of top notch medical students/doctors. To prove their God complexes they play a game. They kill I dividuals in very dark ways to see if the others can figure out how then they'd insinerate the bodies. Very interesting and dark take about inflated ego's.
4 people found this helpful

MoReviewed in the United States on March 10, 2020
4.0 out of 5 stars
Not Bad at All
Verified purchase
I wouldn't call this a horror movie, though.

warrenReviewed in the United States on November 11, 2019
3.0 out of 5 stars
an unimaginable horror
Verified purchase
the acting superb. the story, while watchable for me at first, became too frightening. the writing and the carrying out of it was terrible to watch. I kept thinking who or why can someone create this horror. very uncomfortable.
One person found this helpful
See all reviews
Back to top
Get to Know Us
Make Money with Us
Amazon Payment Products
Let Us Help You
EnglishChoose a language for shopping. United StatesChoose a country/region for shopping.
© 1996-2022, Amazon.com, Inc. or its affiliates