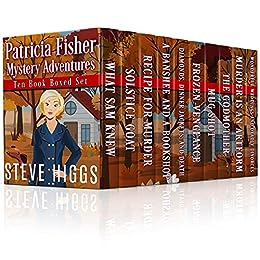 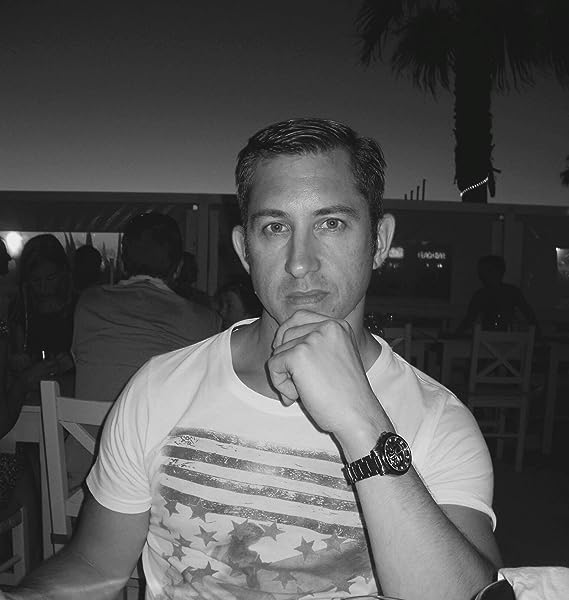 by steve higgs (Author) Format: Kindle Edition
Book 2 of 2: Patricia Fisher's Big Boxed Sets
See all formats and editions
Sorry, there was a problem loading this page. Try again.
Amazon.com #1 in Cozy Mystery, Mystery Anthologies, and Amateur Sleuths
‘A complete cozy mystery series with an ending that left me on a high for days!’

Indulge yourself with a mystery-packed boxed-set of adventure as English village sleuth, Patricia Fisher, opens her own investigations agency and finds herself hip-deep in criminal capers before she can butter her first scone.

With her steady butler in tow, our modern-day Miss Marple will apply her fierce mind to the detriment of gangsters, thugs, and killers who dare to ply their trade in her quiet corner of the world.

However, beneath the cricket teas and church council meetings, a more sinister undercurrent flows. And when Patricia inadvertently triggers the wrath of a powerful enemy, she finds herself marked for elimination. They believe they are the snake cornering the small furry animal. Patricia doesn’t stand a chance, right?

Well, normally that might be true, but our lady has friends of her own – people who will come to her aid when she needs. That’s not the worst of it though, for the snake is about to find out the furry creature it cornered is a mongoose.

Hold onto your seat, because these cozy mysteries are an adventure!

'My goodness, this chap can write a mystery. I can never work them out before he does the big reveal, and they are so gripping! I find myself breathless at times.’
‘How is it that these books can be so thrilling, and yet also so funny? I am biting my fingernails one minute, then laughing uncontrollably the next.’
‘How is this not on television? How is this not a blockbuster film? Never has a series of books captivated me like this.’
Read more
Previous page
Next page

When Steve Higgs wrote his debut novel, Paranormal Nonsense, he was a captain in the British Army. He would like to pretend that he had one of those careers that must be blacked out and generally denied by the government, and that he has to change his name and move constantly because he is still on the watch list in several countries. In truth, though, he started out as a mechanic - not like Jason Statham, sneaking around as a hitman, but more like one of those sleazy guys who charges a fortune and keeps your car for a week even though you only came in for was a squeaky door hinge.

At school, he was largely disinterested in all subjects except creative writing, for which he won his first prize at the age of ten. However, calling it the first prize he won suggests that there were other prizes, which is not the case. Awards may yet come, but in the meantime, he enjoys writing mystery and thriller novels and claims to have more than a hundred books forming a restless queue in his mind because they are desperate to be published.

Now retired from the military, he lives in southeast England with a duo of lazy sausage dogs. Surrounded by rolling hills, brooding castles, and vineyards, he doubts he'll ever leave, the beer is just too good.

4.8 out of 5 stars
4.8 out of 5
602 global ratings
How are ratings calculated?
To calculate the overall star rating and percentage breakdown by star, we don’t use a simple average. Instead, our system considers things like how recent a review is and if the reviewer bought the item on Amazon. It also analyzes reviews to verify trustworthiness.
Top reviews

Kindle Customer Beachy
5.0 out of 5 stars Patricia Fisher's Mystery Adventures
Reviewed in the United States on July 4, 2021
Verified Purchase
I enjoyed Patricia s stories of her mystery adventures with her friends Jermaine and Barbie.. living in her home and starting her own agency. Her assistant ,Sam is a fun chap with Downs . I particularly enjoyed her antics involving her garage full of cars.. she continues to foster her love for Alistair.. but needs to be divorced. Soon to be ex wants half of all she owns
But can he get it ?.

Kindle Customer
5.0 out of 5 stars Wonderful Stories!
Reviewed in the United States on October 12, 2021
Verified Purchase
I discovered Steve Higgs and his Patricia Fisher stories with the Cruise Ship Series, which you should read first.. Every story is delightful. Patricia Fisher is delightful. This series takes place mostly on land with Patricia Fisher's private detective company. It always amazes me that authors can think up so many wonderful plot lines and Steve Higgs does in spades! Each book is relatively short (around 160 pages each). Although I don't usually like short books because I feel there isn't enough room to develop the characters, the characters in these books are fully developed and you really like the heroes and heroines and really don't like the bad guys. Kudo to Steve Higgs for giving me so many hours of pleasure.
Read more
One person found this helpful
Helpful
Report abuse

Kindle Customer
5.0 out of 5 stars Love this series.
Reviewed in the United States on July 26, 2021
Verified Purchase
This second set of Patricia Fisher mysteries did not disappoint! It has all the wacky characters and impossible situations that the first series had. Mrs. Fisher solves mysteries with some keen observation, some inventive intuition, and sometimes just plain dumb luck. It’s a great series for summer vacation reading.
Read more
2 people found this helpful
Helpful
Report abuse

Kindle Customer
5.0 out of 5 stars More, please.
Reviewed in the United States on June 5, 2021
Verified Purchase
Not my genre, but I wanted some light reading and 20 books later I find myself hooked. Well done, Sir, well done. I've already recommended the series to a friend.
Read more
3 people found this helpful
Helpful
Report abuse

Apple24kt
5.0 out of 5 stars This is definitely interesting
Reviewed in the United States on August 6, 2021
Verified Purchase
As well as entertaining. How it all begins is a surprise, it only gets better. The cast of characters are definitely different. The history of each will keep you interested, in the way detective stories always do. Then laughing through so many of their antics.
Read more
2 people found this helpful
Helpful
Report abuse

Joan
5.0 out of 5 stars I love these books!
Reviewed in the United States on November 26, 2021
Verified Purchase
The characters are refreshingly real and down to earth. The plots compelling. The solutions to the mysteries are unique and cagey. The books are a pleasure to read. I can see the characters, feel the characters, hear their conversations, imagine the ship and its routines, and feel like I'm a part of the investigations. I love the books and can't wait to read the next one. Thanks to Book Bub for introducing the books to me. Million of thanks to Steve Higgs. Keep on writing please.
Read more
Helpful
Report abuse

BABS
5.0 out of 5 stars Great adventures
Reviewed in the United States on October 14, 2021
Verified Purchase
I read 10 Patricia Fisher books The characters are lively, entertaining and mostly believable. They are all a great read just for pure entertainment. I have to admit there were several moments when I admitted “that wouldn’t happen in real life” but that’s why it’s a work of fiction. I’m a sucker for the good guy coming out on top, and these filled the bill, on that.
Read more
Helpful
Report abuse

Angie
5.0 out of 5 stars More mayhem and mystery with Patricia
Reviewed in the United States on August 24, 2021
Verified Purchase
Steve does it again in his second 10 book set. I couldn't put it down. I love all the interplay between the characters. I love that this series can take your breath away one minute and laughing until the tears start to roll because your laughing so hard. This whole series is enjoyable from beginning to end and I can't wait for more of Patricia's adventures.
Read more
Helpful
Report abuse
See all reviews

Kindle Customer
5.0 out of 5 stars Superb Thrilling Stories
Reviewed in the United Kingdom on August 22, 2021
Verified Purchase
That's been one fantastic collection to read. It's been wonderful to follow through with Patricia Fishers mysteries. Honestly if you're wanting a really great read add this collection to yours you really won't regret doing so. I can't wait to read more about Patricia solving problems for others in the next series. Thanks for allowing me to read these wonderful stories Steve there so spellbinding I honestly don't want to put them down
Read more
2 people found this helpful
Report abuse

cescottie
5.0 out of 5 stars Humour with Mystery
Reviewed in the United Kingdom on June 21, 2021
Verified Purchase
Enjoying the books from this author. Delightful writing style with humour and well developed characters. He seems to take the mundane experiences and turn them into mysteries with a twist. Delightful to read and follow the characters' entanglements and achievements.
Read more
2 people found this helpful
Report abuse

Amazon Customer
5.0 out of 5 stars Ten books of pleasure
Reviewed in the United Kingdom on July 17, 2021
Verified Purchase
Each book is so different except for the main characters. It’s amazing how Steve manages to write with such humour and brilliance. I can’t wait for another ten Patrica Fisher books although have some other of his books to read or now.
Read more
2 people found this helpful
Report abuse