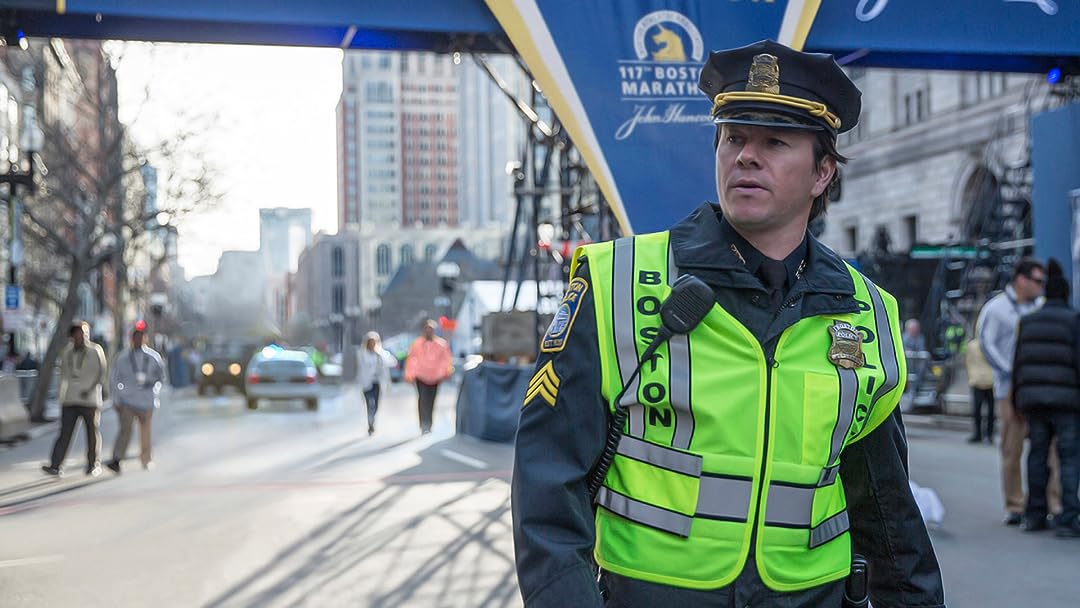 (8,621)
7.32 h 13 min2017X-RayHDRUHDR
Mark Wahlberg shines in this all-star action-thriller that chronicles the courage and power of the people of Boston during the real-life manhunt for the Boston Marathon bombers.

I’ll just start with a full disclosure:
I had extremely low expectations for this movie after reading its description and seeing the release poster for it - but I was pleasantly surprised!
After having read through some of the other criticisms made for it I can see why they are offered; alternatively, there are some distinctive creative choices made in narration that the production team for this film are rather open about, and I think ‘Patriot’s Day’ further justifies the nature in which I enjoy films - which is followed up with research and hardly ever just at face value.
----
When I saw the poster for this film I groaned for two reasons specifically:
1) I was fully prepared for the pedestalization of one hero in the wake of an event that has been declared one of the worst terrorist related acts since 9/11
&
2) Marky Mark knows how to rub me in all of the wrong ways.

In regards to the first point the most obvious critique offered is this: there’s just no way that the character Wahlberg is portraying (Tommy) played as much of a role in the investigation of the Boston Marathon bombing as he does in this film.
GUESS WHAT???? He doesn't!!!!
Tommy Saunders, for all intents and purposes, as a character is a fictional creation; It’s not made clear throughout the course of this film (obviously), but he’s meant to be a compositary representation of the efforts put forth by a large amount of police officers that were involved in this particular investigation. This does make him to be a ‘Houdini’ of sorts in that his appearance and the weight he has in certain scenes doesn’t always make logical sense, but I acknowledge this as a practical choice as someone that doesn’t like watching movies that have a bunch of characters I’m expected to keep up with.

Now, I don’t have any personal beef of my own with Mark Wahlberg, but his performances tend to be very hit-or-miss for me in all honesty. His intensity often comes off to me as arrogance (which, I mean, could be related to the characters he plays) and as a caricature of someone that is perpetually plagued with the threat of emasculation hanging over their head.
With that in mind - I feel given Wahlberg’s reputation he was favorably restrained more in some respect in this role than he has been in others. There’s a genuine anger about Saunders (as to be expected) that simmers and seeps, but this is managed with a level-headedness I don’t often find myself associating with his characters. At one point his character starts to cry and it feels like a true reflection of the love Wahlberg has for his hometown (Boston) and perhaps his own grief associated with the actual bombing itself. He might not have been my first choice from the pool of actors that are from Boston (*𝑪𝒐𝒖𝒈𝒉* 𝑪𝒂𝒔𝒆𝒚 𝑨𝒇𝒇𝒍𝒆𝒄𝒌 *𝑪𝒐𝒖𝒈𝒉*) but I’m more than willing to admit that for this film specifically he may have been the right one.

In the grand scheme of things the entire cast carries their separate roles with a graceful ferocity, but I think one person in particular needs to be acknowledged: Alex Wolff.
I don’t think Wolff performs exponentially better than his co-stars, but I think it’s worth mentioning that he looks so much like the bomber he was portraying that he 𝒉𝒂𝒔 𝒃𝒆𝒆𝒏 𝒎𝒊𝒔𝒕𝒂𝒌𝒆𝒏 𝒇𝒐𝒓 𝒉𝒊𝒎 𝒊𝒏 𝒓𝒆𝒂𝒍 𝒍𝒊𝒇𝒆; it only goes without saying that this resemblance has been a significant source of stress for him (even if briefly at times) and he reported having an incredibly difficult time getting in to the “head-space” needed to properly take-on this role. This emotional weight is heavier than what I think could possibly be put into words, and explicitly expressing my appreciation for his presence and efforts feels almost mandatory on my part.

Alluding to terrorism as a subject in media of any form requires a certain amount of finesse that is often un-accounted for; that said - I deliberately braced myself for what I thought was going to be a saturation of Islamphobia.
‘Patriot’s Day’ is careful to illustrate scenes in which suspicions are made about the individuals carrying out this event, but it is even more meticulous in how it openly confronts these biases without feeling contrived or forced. Characters have dialogue that is intended to challenge assertions rooted in prejudice (“𝑾𝒉𝒂𝒕 𝒅𝒐𝒆𝒔 𝒂 𝒑𝒉𝒐𝒕𝒐𝒚𝒑𝒊𝒄𝒂𝒍 𝑱𝒊𝒉𝒂𝒅𝒊𝒔𝒕 𝒍𝒐𝒐𝒌 𝒍𝒊𝒌𝒆? 𝒀𝒐𝒖 𝒈𝒐𝒕 𝒂 𝒑𝒊𝒄𝒕𝒖𝒓𝒆 𝒐𝒇 𝒐𝒏𝒆?”) and there is a clear omission of elements that could be labeled inherently derogatory in nature. The icing on the cake is when audience members are told after the fact in a definitive manner that the people who carried out the Boston Marathon bombing don’t reaffirm narratives connected to harmful and wildly inaccurate stereotypes.

All compliments aside I will note that the final 40 minutes of this film does feel a bit sloppy in its execution; more specifically, the change in pace inches on the edge of uncomfortably abrupt. On one hand this makes a lot of sense given the fact that the first half is defined by an understandable tension that would only naturally occur during the investigation and initial stages of pursuit following such a catastrophic event. On the other hand this does make ‘Patriot’s Day’ behave like a train that is having a particularly difficult time coming to a complete stop without spreading itself thin. Nevertheless, it is successful in ending on a note that is optimistically sound and appropriately ambivalent.

In regards to portrayal of the victims and their subsequent family members it is also important to know that ‘Patriot’s Day’ is both accurate and respectful in how the representation of these figures is handled. Images that are graphic in nature are not shied away from, but they are not featured in a way that I would describe as emotionally manipulative or carelessly insensitive. There are many characters that were written with the intention of having more screen time in the initial script, but there roles were changed after the fact at the request of their real-life counterparts.

Is this movie perfect? Absolutely not, as there are problematic sequences that bubble under the surface in addition to pace-related challenges that are difficult and at times even impossible to ignore.
Regardless, 'Patriot's Day' is one of the better - perhaps even one of the best - attempts at intermingling nonfiction and fictional elements I have seen in a particularly long time.
I would recommend!

SamReviewed in the United States on November 24, 2022
5.0 out of 5 stars
I am Boston Strong
Verified purchase
I've lived outside of Boston for my entire life, I worked in Belmont, Watertown, and Arlington. It's beautiful to watch humans come together to stop these psychopaths.

D. WarfieldReviewed in the United States on July 31, 2022
5.0 out of 5 stars
Great Love Story..
Verified purchase
Being a Mass. girl and so proud of my state, I was wary of this movie. But it was a love story to Boston and her indomitable spirit.
It started a bit slow, but picked up quickly.
They did a fabulous job of interspersing real footage in with the filmed scenes and it was cast perfectly (well, except for one - John Goodman. Note to all actors - there is more to a Mass accent than just "dropping the Rs". )
I also give some serious props to whomever choreographed the shootout - they could've overdid it, but they didn't. It had a very true-to-life feel.
On a personal note, as we learned during that time period, the police put their heart and soul into finding these two men and protecting the area. Their dedication was second to none and this movie really shows that.
But I do have to give an extra shout out to the medical staff who worked on Tamerlan Tsarnaev - to have him rolled into their ER and they still gave him the best care they could; that was superhuman, as far as I am concerned.

BullittFanReviewed in the United States on October 3, 2022
5.0 out of 5 stars
True story!
Verified purchase
This is a great movie. It is the story of the Boston Marathon Bombing. It is very detailed about the bombers and the victims of the bombing. It little hard to watch in spots but is well done.

Jackbooted thugReviewed in the United States on September 13, 2022
3.0 out of 5 stars
Depicts good people in a bad situation
Verified purchase
I really wanted to give this movie a higher score, but I just cannot. It depicts a horrible event carried out by the most despicable people, but the director just never quite connected with the audience. It comes across as a cheerleading session more than a historical drama, largely due to the over the top “Boston Strong” theme.
Everything about the story is told well. The introduction of the characters. The humanization of the characters. The setting of the movie itself. All of that is done well. But Hollywood just couldn’t resist making this an expose on “See, Americans are tolerant” or “Look at how well we all came together”. It just got a little too much at times, particularly the ending.
The shootout scene is gratuitous and over played. The feigned public cooperation with law enforcement when Hollywood constantly vilifies law enforcement was almost unbelievable. It was as if the director was atoning for decades of vilifying the police when terrorism was at play. This movie pulls at patriotic heart strings because if the cause is terrorism it is OK to cast the police in a good light when Hollywood normally hates law enforcement.
The acting is mediocre. The writing is non-existent and merely taken from the news. The directing wasn’t bad nor was it good. I really wanted to like this movie. They had a chance to capitalize on a patriotic theme and they still came across as lecturing us.

Michelle V.Reviewed in the United States on October 1, 2022
5.0 out of 5 stars
Good sad movie
Verified purchase
This is a good but very sad movie. Horrible that this happened

emily k.Reviewed in the United States on September 6, 2022
5.0 out of 5 stars
solid boston mark wahlberg cop movie, plus very emotional and honors bombing victims
Verified purchase
When I'm really worn out by life I sometimes watch this and let myself wish I was Marky Mark's wife and he's a Boston cop and we live in Boston and he keeps me safe.

KimarieReviewed in the United States on September 16, 2022
5.0 out of 5 stars
Boston Strong
Verified purchase
Well done. Grab your tissue box. Might trigger you.
See all reviews
Back to top
Get to Know Us
Make Money with Us
Amazon Payment Products
Let Us Help You
EnglishChoose a language for shopping. United StatesChoose a country/region for shopping.
© 1996-2022, Amazon.com, Inc. or its affiliates