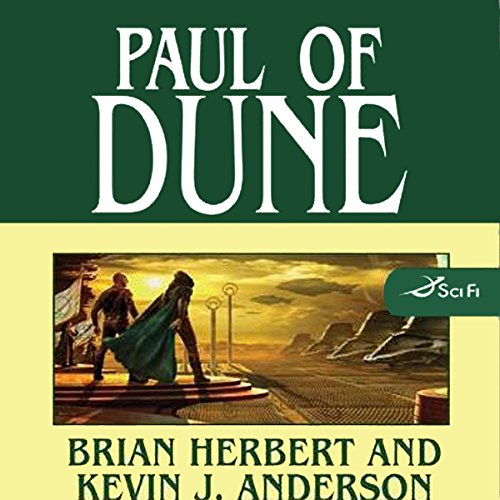 Paul of Dune: Book One of the Heroes of Dune

Frank Herbert's Dune ended with Paul Muad’Dib in control of the planet Dune. Herbert’s next Dune book, Dune Messiah, picked up the story several years later after Paul’s armies had conquered the galaxy. But what happened between Dune and Dune Messiah? How did Paul create his empire and become the Messiah? Following in the footsteps of Frank Herbert, New York Times bestselling authors Brian Herbert and Kevin J. Anderson are answering these questions in Paul of Dune.

The Muad’Dib’s jihad is in full swing. His warrior legions march from victory to victory. But beneath the joy of victory there are dangerous undercurrents. Paul, like nearly every great conqueror, has enemies--those who would betray him to steal the awesome power he commands. . . .

And Paul himself begins to have doubts: Is the jihad getting out of his control? Has he created anarchy? Has he been betrayed by those he loves and trusts the most? And most of all, he wonders: Am I going mad?

Paul of Dune is a novel everyone will want to read and no one will be able to forget.

Your audiobook is waiting!
Learn more about membership
List Price: $31.18
You Save: $3.90 (13%)
By completing your purchase, you agree to Audible’s Conditions Of Use
Sold and delivered by Audible, an Amazon company

Amazon Customer
5.0 out of 5 stars Very Enjoyable
Reviewed in the United States on April 2, 2022
I have 3 or 4 books in the Dune series and this is probably my favorite. It moves along in an interesting way and doesn't bog down like some of the other books in the series.
Images in this review

Arnold
VINE VOICE
4.0 out of 5 stars the benefit of reduced expectations
Reviewed in the United States 🇺🇸 on May 18, 2014
Verified Purchase
I had the benefit of reading many negative reviews trashing this before I decided to read it. My expectations were so low that I found myself enjoying the book more than I'd expected. To be clear, this book is not high literature. It's not nearly as deep or rich as any of Frank Herbert's Dune novels. Nevertheless, it provides a fun and even sometimes interesting backstory for Paul Atreides.

The book has two interwoven parts, before and after the events of Dune. The chapters set before Dune are less interesting and resemble the more space opera aspects of Brian Herbert and Kevin J. Anderson's Dune Prelude Trilogy. Also, there were quite a few pointless contradictions, most notably the fact that we see Paul traveling off Caladan before Dune took place (Frank Herbert's original novel clearly states Paul had never been off world).

However, the scenes set AFTER Dune did hold my interest. I thought the authors actually did a decent job balancing the tyrannical aspects of Paul's reign with his inner emotional struggle. While not portrayed subtly, it's a fascinating dynamic. We also get further character development for Stilgar, Gurney, and Irulan. My favorite part was the subplot with Count Fenring. I was always intrigued by him in Dune and am glad to see his story finally resolved.

Does this book really add much to your understanding of the Dune universe? Not really. Most of the important plot aspects are told or strongly implied in Dune Messiah. However, if you want to see more of Dune during the period after Dune and before Dune Messiah, those parts of the book at least hold some promise. Just go in with your expectations low and you might just get something out of the book.

Wordman
5.0 out of 5 stars Damn good work in the continuing saga of the Dune chronicles
Reviewed in the United States 🇺🇸 on November 6, 2008
Verified Purchase
I will admit, when I read the premise for this book I was a little concerned. I didn't know how to take this look back into the Dune universe that I began reading well over twenty years ago. However, being an avid Dune fan, and after buying and reading all of Brian and Kevin's Dune novels, I purchased this one and dove right into it upon its arrival in my mailbox.

As I read, I was reminded of the feelings I had in first reading Frank Herbert's Dune saga as a kid, feelings which surfaced again a few years back when I began re-reading the 6-book series...those feelings were tied to the massive jump we experience going from Dune to Dune Messiah. In this work, Paul of Dune, I believe that Brian and Kevin have done a good job in explaining the transition from Dune to Dune Messiah. I just finished it tonight and was absolutely pleased with the tale.

I know that a lot of people are bent out of shape because of the new Dune novels that Brian and Kevin have written, but this is a not unexpected reaction. One thing to keep in mind is that NONE of these books would have been written without the Herbert Foundation's blessing. Further, Frank didn't just write six books and the outline for Dune 7. The man created a vast new universe and from all that I have read, he kept tons of notes. So what you are reading in the new novels is not whatever Brian and Kevin decided to pull out of thin air. For me, I was thrilled that I would finally get to read the final Dune novel nearly 20 years after being left hanging by Frank's tragic death. What Brian and Kevin are doing is wonderful, welcome to a Dune fan such as myself and is something I would do were I in their shoes.

In short, if you don't like the new books, don't buy them or read them and stick with the six original Frank Herbert Dune novels. Otherwise, I think that if you are a Dune fan, you will relish this look inside Paul's character. I think that Brian and Kevin have come very close in matching the style of Frank's writing and I applaud them for it.

Write on, gentlemen...please write on.

LikesRomTragicDramas
4.0 out of 5 stars I see what the fuss was about
Reviewed in the United States 🇺🇸 on July 29, 2021
Verified Purchase
I am sad that it took me until almost the age of 50 to be convinced I SHOULD read these novels. The novels written and planned by the original author stand the test of time. Great world building and character development. Period.
Read more
One person found this helpful
Helpful
Report abuse

otto skorzeny
5.0 out of 5 stars Very Enjoyable
Reviewed in the United States 🇺🇸 on April 2, 2022
Verified Purchase
I have 3 or 4 books in the Dune series and this is probably my favorite. It moves along in an interesting way and doesn't bog down like some of the other books in the series.
Read more

5.0 out of 5 stars Very Enjoyable
By otto skorzeny on April 2, 2022
I have 3 or 4 books in the Dune series and this is probably my favorite. It moves along in an interesting way and doesn't bog down like some of the other books in the series.
Images in this review

Derek Johnson
5.0 out of 5 stars Great Story
Reviewed in the United Kingdom 🇬🇧 on May 13, 2019
Verified Purchase
I am re-reading the whole original Dune stories after many years of absence. This story line filled in much of Paul's development from a young lad to his Messiah status. As such, whilst I did read it between Dune Messiah and Children of Dune, it does not strictly speaking fit in that intervening period. Nevertheless, it's a great story and well written by the authors who keep to the integrity of Frank Herbert's style.
Read more
2 people found this helpful
Report abuse

Discerning Buyer
5.0 out of 5 stars EXCELLENT
Reviewed in the United Kingdom 🇬🇧 on July 12, 2020
Verified Purchase
To paraphrase John Belhushi in the "Blues Brothers" movie .... Best go and buy all the Dune books you can. I have selectively collected a wide range of science fiction sequences for some decades. It is easy to see why so many think that this book forms part of the series which can lay claim to being "the king of them all".
Read more
Report abuse

M. Miller
5.0 out of 5 stars Dune!! What can I say. Fantastic books.
Reviewed in the United Kingdom 🇬🇧 on August 16, 2017
Verified Purchase
What can I say. Im a Dune fan and I collect all the books. They are worth a read. Really good stories. Reading all the books in order of time line is a must. I love the new as well as the old.
Read more
Report abuse

Sam
5.0 out of 5 stars Brilliantly done
Reviewed in the United Kingdom 🇬🇧 on April 17, 2019
Verified Purchase
Hard to put this book down. I am rereading all the original books and am now looking forward to reading the rest of the newer additions as well.
Read more
Report abuse