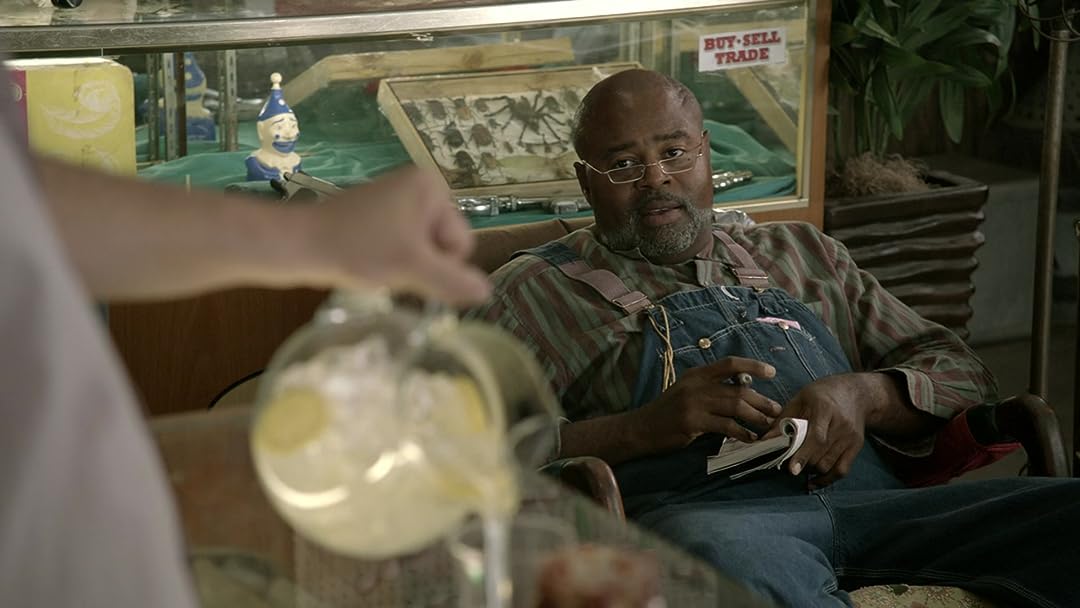 CitizenReviewed in the United States on October 18, 2019
1.0 out of 5 stars
Bad acting, bad storyline, not funny movie
Verified purchase
The acting is what you would expect from 2 drunk friends anywhere USA making fun of the south. The storyline is not entertaining at all and I didn't laugh once. More Hollywood portrayal of Southerners being mentally retarded racists, while half of California sleeps in streets covered in hepatitis, has a rash of trailer park home fires, and meth & heroin epidemic and still claiming to be more intelligent. And people wearing black nazi outfits telling everyone to think like them or else, and calling other people "fascists". How ironic.
30 people found this helpful

Reading ReaderReviewed in the United States on October 12, 2020
1.0 out of 5 stars
I tried to think of a film that rivaled this one for bleakness and nothing came up
Verified purchase
People keep describing this movie as "funny." The "humor" in women being kept in cages as naked sex slaves, of them "escaping" only to almost immediately be recaptured, eludes me completely. Women are being kept in such conditions in the real world at this very moment. That's not funny, and neither is the Stockholm Syndrome depicted in this film. But whatever.
11 people found this helpful

Amazon CustomerReviewed in the United States on October 23, 2019
4.0 out of 5 stars
It's a trilogy
Verified purchase
The description is not accurate as it makes it sound like a scavenger hunt.
This is actually a trilogy centered on pwan shop and the crazy town where it resides. This town has 2 babrer shops side-by-side and the choice you make is of extreme social importance.
The first story is about meth heads (always funny) wanting to rob their supplier, the second is a guy (Matt Dillon) who wants to find his kidnapped/missing first wife (dark, not intended to be funny, but interesting) and the third is an Elvis impersonator (Brendan Fraser) who works county fairs (funny in a sad way).
Pretty comical and very watchable.

chuck TReviewed in the United States on November 24, 2019
1.0 out of 5 stars
Could not make it past 25 min
Verified purchase
i was taken out of the movie with the pro Jewish narrative. I don't care for any movie that has an underlining narrative regardless what the cause. This movie does the usual with stereotyping "White" Men as stupid or Nazi..
10 people found this helpful

Christopher C.Reviewed in the United States on May 30, 2021
5.0 out of 5 stars
Darkly Comedic, Hillbilly version of Pulp Fiction
Verified purchase
This movie is a dark comedy that tells 3 entertwined stories all centered around a pawn shop in some backwoods town somewhere in The South (it never says where, exactly). You basically watch the same day through the eyes of 3 different people/groups of people. It all comes together in the end. The first third is deffinitely funnier than the others, but the last two have their moments of dark humor.
2 people found this helpful

Joe BanksReviewed in the United States on June 25, 2014
5.0 out of 5 stars
Salvation Comes in Many Forms
Verified purchase
Let me start off by saying that this is maybe the most genuinely fun dark comedy I've seen in a long, long time. The three stories were all excellent, with great performances by Matt Dillon and Paul Walker (worth watching just for the way he moves his fingers). On the surface, this movie would seem analogous to a dinner at a Chinese restaurant; that is, thoroughly enjoyed but quickly forgotten. Yet, many deep questions keep coming to mind regarding one of the movie's core themes: Salvation. Specifically the characters of "The Man" and the Preacher. "The Man" shows up in a pickup truck, looking like the Marlboro man dressed in black and offers salvation in the form of a shotgun. The recipient of his largess quickly puts the shotgun to deadly use, killing his backstabbing buddies along with himself. In contrast, we have the Preacher man, dressed in white, who hangs around a local restaurant called "The Fire Pit". He has the ability to seemingly appear from nowhere and hands out pamphlets that appear to have Satan drawn on them. Oh, and he goes around making deals for people's souls. In contrast to "The Man", the result of the Preacher's dealings are pretty benign. Thanks to the Preacher, Ricky Baldowski (the Elvis impersonator) can suddenly belt out a version of "Amazing Grace" that is good enough to make old enemies (like feuding barbers Doc and Cook) make up. So, who is offering salvation and who is offering damnation? Is the point that we can't tell the difference? Darned if I know.
17 people found this helpful

Brad LundellReviewed in the United States on October 22, 2021
2.0 out of 5 stars
The Whole is Less Than the Sum of the Parts . . . Far Less
Verified purchase
Some interesting and darkly humorous moments, but overall it just doesn't come together. Satirizing the South almost qualifies as a major sport in the United States and that's been going on for years and like with almost any region or subgroup, there's plenty of fodder for gentle abuse for comic purposes. The problem here is that there's a meanness that seeps through that spoiled the effort for me. Some good performances from some really good actors/actresses, but the effort left a sour taste (and I'm a Northerner).

OutdoorsmanReviewed in the United States on May 14, 2021
5.0 out of 5 stars
Wonderful Dark Comedy Movie
Verified purchase
This movie is a nice return to Dark Comedy Movies before everything had to be Politically Correct. I doubt Hollywood would make this movie today. I found the movie highly enjoyable with multiple storylines intertwined that connect with each other in the development of the movie. Not everyone will enjoy this movie and some will be highly offended, but I felt the movie had some memorable actors and a storyline that worked well together and made this a classic movie in the genre of "Napoleon Dynamite" but more extreme.
See all reviews
Back to top
Get to Know Us
Make Money with Us
Amazon Payment Products
Let Us Help You
EnglishChoose a language for shopping. United StatesChoose a country/region for shopping.
© 1996-2021, Amazon.com, Inc. or its affiliates