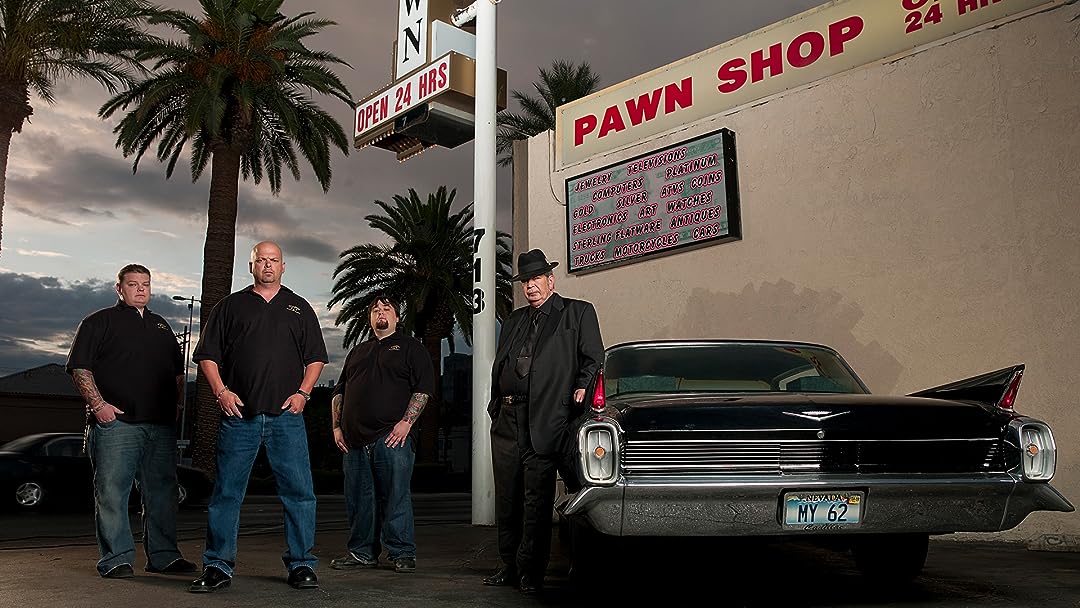 (45)
7.22009X-RayTV-PG
Three generations of the Harrison family to separate the fabulous from the fake in Pawn Stars Vol. 1.

GregReviewed in the United States on May 8, 2018
5.0 out of 5 stars
Not sure...
This looks like a good show. It's probably worth about 10-15 bucks, best I can do. If you can hang around I'll call a buddy of mine, he's an expert, maybe it's worth more.
21 people found this helpful

Jim in Colorado - Best ReviewsReviewed in the United States on February 15, 2020
5.0 out of 5 stars
U.S. History - one item at a time!
Talk about Trivia! If you are a minutia freak like i am, you will absolutely LOVE this show. I have been watching it on cable for years. Its about learning what the history of things and their place in AMERICAN HISTORY as well as what they are worth today. Most of the "EXPERTS" rick brings in are real pros and it is funny to watch the owners of items that have brought them in to sell find out that they are worth a lot less OR a lot more than they had imagined. Talk about REALITY! Great show to watch when you are just kicking back, tired of watching the Senate and Congress rip each other apart, scared to death that the Coronavirus, SARS, or Ebola will get you, and just want a little SANITy in your life. Thanks for making this a part of PRIME!
One person found this helpful

Cassandra MorrisonReviewed in the United States on June 1, 2018
5.0 out of 5 stars
One of the Best Shows Ever About Business, Family, and How to Treat Others.
From day one this series has been one of my favorite shows ever on the air. The chemistry among the main cast members was always great...the life lessons they act out and pass on to us are worthwhile if you're smart enough to listen when the Old Man or Rick or even Corey are talking about buying and selling. What they say on the show makes a lot of sense. And they tell you up front that they are NOT going to give you the best price for your item, And they tell you why...they are in business to MAKE money. Presumably LOTS of money so the more they can talk you down on the price (up to a point) the happier they are with the deal.

On the other hand they don't want to take TOO much advantage of you, either. That's bad for business in its own way, If word got out they were cheating their customers the shop would close down due to lack of business. (Look up Pawn Shops in the Las Vegas phone book sometime..Gold & Silver Pawn isn't the only game in town).

So if you bargain well, and are respectful, and friendly you'll get a fair deal. Meaning one you can be SOMEWHAT happy about. Occasionally you'll get a deal you can be VERY happy about as it may turn out your item is worth far MORE than you had thought. But don't expect full value...expect about half of that. On rare occasions (such as when they know they have a confirmed buyer for the item) you might even get two thirds of an item's retail value,
If you want full value auction the item on eBay or one of those web sites. It might take a while but, eventually, you'll get what you want for the item because then you are dealing with a collector...not someone who has to turn around and resell the item.

I am going into all this because a lot of people on YouTube and elsewhere claim that they cheat their customers. They really don't. But business involves buying low and selling high because you have salaries to pay, rent to pay (usually, for the store and the cubic feet involved, a parking lot for your customers, lights, heat, air conditioning, taxes, business licenses, etc. etc All that determines how much they can pay for things and still be in the green.

And who can say how many times the Old Man, or Rick, or Corey, or Chumlee (before they got famous and couldn't work in the shop anymore) or other employees have taken pity on some down and out customer whose item was worthless but they took it for five or ten bucks and never let on but just tossed it away after the customer left. Why? So they could get a meal, and maybe a pack of smokes or whatever and not have to feel like a beggar. You don't think they'd do such a thing?

Yes, they would. And yes they did. I used to live in Vegas before this show ever went on the air and I have been to the Gold & Silver Pawn when it was just the closest pawn shop and Rick did that for me. And I have never forgotten.

As for this first season of the show...it is golden in and of itself. Beginning with episode 5 the late great R. Lee Ermey starts dropping by the show and it is a bittersweet joy to see him again. He is, of course, plugging his series Lock and Load and he is in full Drill Instructor Mode when he shows up.

Every recruit curses the Drill Instructors (and he had been a REAL one for plenty of years before he started doing movies) but one day you realize that was the man who was teaching you the things you NEEDED to know to help you survive a combat situation. And you realize you never HAD a better friend in all your life than that guy.

Watching Corey "Big Hoss" trying to train his cousin in the business before he can get a raise is hilarious. But she learns, I figured she would because I figured he'd be a pretty good teacher and she struck me as being willing to learn. So before she passed Rick's test I knew what was coming. 😁

So, what are they really like? They're nice people. More or less. They're human, though. So in business they are professionally likeable and friendly (as long as you don't act like a complete jerk). If you bump into them somewhere you can say Hi and get a hi back. Autographs...well, you can always ask but don't get upset if they say no. And don't be surprised if now and then you get growled at by one or the other of them (especially if you start demanding an autograph or whatever) they are people. They have good days and bad days and you can soon find out which they are having if you really want to 😁.

As for the show...it has always been a joy to watch and I'd add this season to my collection of shows to remember and re-watch someday if you haven't already.

Chris CapersReviewed in the United States on June 30, 2018
5.0 out of 5 stars
Pawn Stars is great! Fun and educational
Pawn Stars is great! Fun and educational. To the people who took time out of their busy day to watch pawn stars, and then write lowsy bad reviews about it, saying how they have always hated the show for years and they could not stand watching it again - I have to ask, HOW FREAKING STUPID AND DESPERATE does one have to be in order to watch a rerun of a television show that they did not like the first time they saw it, but now they just paid money to watch it? Not only that, anyone who says they DON'T like Pawn Stars is a liar!!!
2 people found this helpful

Richard LesterReviewed in the United States on April 27, 2020
4.0 out of 5 stars
Where is Peachs Now
Wow talk about a bad career move. Not only did Peachs and up losing her job she lost out big time on the fortune that came with being on this series. Average cast members made 30k a episode and with her good looks there just no telling where it might have taken her but pretty women think they can get away with anything notice when Rick asked her why he doesn't fire her first thing she says is because she is pretty a life changing mistake few opportunities come in life of your young take this as a lesson and ciese whatever doors may open for you just laying attention and realizing life changing moments can make all the difference in the world. I sure would love to see a video of where Peachs is today. I'm willing to bet she isn't making 30k an episode more likely the mother of 3 married to a multimillionaire casino owner lol. You didn't think I forgot that she was very pretty did ya that always has some value in this world we live in.

Dylan ReichstadtReviewed in the United States on August 28, 2018
4.0 out of 5 stars
Great Passive Show to Watch
I really like shows where I can passively watch without feeling like if I missed an episode, I missed a huge part of the story line. Pawn Stars is great for that, and when I do watch it's cool to learn some facts without feeling like I'm watching a history documentary.

Only reason I didn't put 5 stars is they seem to have a lot of guns, which isn't really interesting to me. They all look pretty much the same.
3 people found this helpful

NathanReviewed in the United States on June 15, 2019
1.0 out of 5 stars
fake
everything about this show is fake except big hoss losing weight
5 people found this helpful

RosieReviewed in the United States on March 23, 2021
2.0 out of 5 stars
New "Store" is a Set
First time watching a "new" episode of Pawn Stars and instead of being "in the store" I was watching some actors in a set----BORING
See all reviews
Back to top
Get to Know Us
Make Money with Us
Amazon Payment Products
Let Us Help You
EnglishChoose a language for shopping. United StatesChoose a country/region for shopping.
© 1996-2022, Amazon.com, Inc. or its affiliates