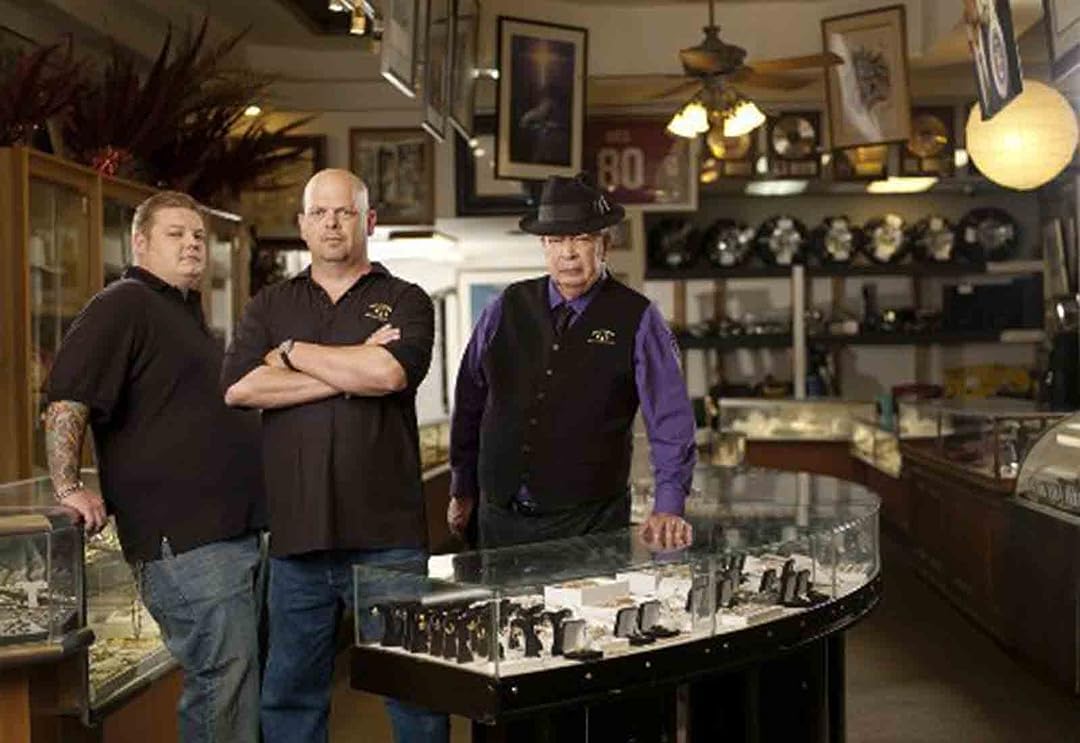 (503)7.22012X-RayTV-14
The hit HISTORY series returns to the only family-run pawn shop in Las Vegas, where three generations of men carefully assess the value of items brought in by an array of quirky customers. Watch as the Harrison family attempts to find the gems and bust the fakes, all in hopes of making the biggest profit possible.

ConstanceReviewed in the United States on December 7, 2014
3.0 out of 5 stars
Just gotta have a love hate relationship with this show.
Verified purchase
This might be Vegas, but damn. Seriously? You're going to sell something that was proven to be worth over $100,000, for only $12,000. I understand 'hard ship' and 'needing money now' but the ones that were proven to have something really valuable, weren't in that way, by their words, and could of easily taken it to auction and gotten what it was worth, if not more. But instead they "settle" for less after they said they wouldn't. ...Unless there are *a lot* of stupid people out there, that just throw their money anywhere it'll land.. seriously. why a pawn shop and not an auction..

By season 2, you just know the guy Rick is reading from what the producers have given him (or he alone) from Wikipedia. There were a couple of episodes in that season alone, that I actually knew he read verbatim what Wikipedia had written, because it was the subject of Abraham Lincoln and as it so happens, I read that exact misinformation in Wikipedia before myself. Since then, in the upper seasons, his information had been corrected/changed about Abe (he even states in one episode "I was told wrong before" and stammers after saying that) . . . . which proved my point, that they were getting some, if not most, of their information via Wikipedia. *sigh* whatever. Everyone can't be smart all the time, but damn, stay away from Wikipedia. Get a real encyclopedia.

I digress... As the seasons roll on (starting pretty much late in season 3), you can bluntly tell that the people are sent in to "pawn or sell" the items because the items are way too out there; that no one in their right mind would sell that at a pawn shop. There has to be a lot of editing going on, if these people are real off the street people. I realize Jimi Hendrix pawned his guitar when he needed to, but he did turn right back around within the same month and got it back... that was before he was 'known'. But now, if you have anything of his, with his signature, why sell it to a pawn shop?! If you want to get rid of it, auction it! jeez.

I also noticed in early season 4, Rick mouthing what others were expected to say - As to follow lines so he didn't miss his. *sigh*

This show is a lot like a train wreck.. you know you shouldn't watch because you know it's just too 'out there' to be real, but you can't help it.

....I just love their definition of profit. HA!!

Regardless, we like to watch it to see all neat stuff that comes in, at least there's that.

James DoigReviewed in the United States on May 4, 2020
5.0 out of 5 stars
Great show . . . but
Verified purchase
During episode 42 they said the "Black Sox" were the lowest paid team in baseball. Untrue. They were the 3rd highest paid team in the American League. In fact, they (as a team) doubled the salary of the worst paid. Also, the baseball looked like it wasn't from 1919 or 1920 - too clean, stitches were wrong, etc.
But these very minor things for a show that is very entertaining and Highly recommended!
Report abuse

Bart MccoyReviewed in the United States on September 18, 2014
5.0 out of 5 stars
A funny, edgy, intellectual, and unpredictable show that always brings you back for more!
Verified purchase
This show is awesome. Several fun personalities run an enormous pawn shop in Las Vegas, Nevada. The main character & store owner, Rick Harrison, is a brilliant, high-IQ guy who keeps an enormous amount of history and trivia at the tip of his tongue, describing items folks are trying to sell/pawn to him-- which gives it a flair of "antique road show". But he's also a straight-talking, no-frills, bottom-line guy who's very forward with customers that he's not a collecter or auction house: he runs a pawn store and has to turn a profit. This driving fact creates a lot of fun and drama, as customers bring in ANYTHING to see what they can score! Rick pulls in outside experts in history, valuable cars, specialty collectors, retailers, auction houses, etc to valuate items in front of customers. Some items turn out to be worthless, sending the customers cursing (bleeped out) out the door because they were ripped off by someone years ago. Other items are genuine and worth A LOT of money, leaving everyone smiling. I've even seen Rick offer unsuspecting customers MANY times their asking price, because he's honest & they were clueless about the value of their item. It leaves my family guessing about what things are worth before they tell you. That alone would make a good show. But there is constant humor of clashing & competing family & friends with rough personalities working in the store, who clearly care about each other, but never miss a chance to goad, prod, and give each other crap. Overseeing it all is the older father-- Richard Harrison, who opened the store with is son Rick in 1989-- who's not afraid to speak up and drop the hammer when it's needed. This gives the show a fun, likable, but edgy flair, somewhere "Duck Dynasty" and "American Choppers". It's funny, it has drama, it's interesting and educational, and it's unpredictable. I highly recommend the show!
One person found this helpful
Report abuse

Anthony J. CavaliereReviewed in the United States on January 31, 2014
4.0 out of 5 stars
Captures my interest.
Verified purchase
I like is show because you get to see a lot of stuff that people own and to learn some facts about them and about history. I like the way Rick and his dad and son haggle with people. Sometimes I think they are a little unfair but they do have to make a living. Some things will sell and others will not. Its a business. Some of those people selling heirlooms must be really down on their luck and living in Vegas they probably have huge gambling losses and debts to pay.
I like Chumley. He is the village idiot but he's their village idiot. A lot of things are played for laughs but Chum is somewhat intelligent and knowledgeable. i really like the show. Better than most of the trash thats out there. This is the only reality show I watch.
Report abuse

R WesleyReviewed in the United States on March 4, 2014
4.0 out of 5 stars
Interesting and Entertaining
Verified purchase
..... you never know WHAT is going to be on the show. If you like Antique Road Show then this show could be for you. It is similar except that it has more personal interaction, mostly from bartering with customers. As pawn shops go, I think they pay way too much for many items that come into their shop. That said, this show has probably brought them some business, and curiosity seekers where they would have been otherwise unnoticed. Call me cheap if you like. Up through Season 5, watching Pawn Stars on Amazon Prime is a good deal and a nice benefit, but I can not imagine paying specifically for this show alone. Like most TV shows, it's just NOT that good.
Report abuse

cekcacherReviewed in the United States on April 22, 2019
5.0 out of 5 stars
Pawn Stars on DVD
Verified purchase
I liked the Pawn Stars on the TV and now I'm enjoying them on DVD's. I esp. liked the items they received that told the History of our Country! . . . . .and it was great to see Chum fire rifles, cannons and bows!
Report abuse

Adam WoodReviewed in the United States on June 7, 2014
4.0 out of 5 stars
Entertaining and I even learn some things
Verified purchase
I admit, this is kind of a guilty pleasure. Sure, at least some of it is scripted, but I find it entertaining. I like how they give background information on the items that come in to the shop, as I actually learn some things from watching it. It's also good practice to watch people set their opening bids and then begin to haggle. Some folks start at the price they want, so they always end up getting less. Others start off way higher than they want, and that generally helps them get more.

I wish it was in surround sound and not stereo, but I like that it's in HD. Being currently free for Prime members is a big plus. :)
Report abuse

RobertReviewed in the United States on April 26, 2014
5.0 out of 5 stars
Boy, have these guys grown!
Verified purchase
From the earliest episodes when we were just getting to know these crusty curmudeons, old and young alike, to seasons six and seven, we have watched a family grow, mature and mellow. This is one for the family. Yes, it's a little edgier, earlier on, but it has toned down a lot, we've gotten to really know these characters, and even come to love some of them. A must see kind of, "Antiques Road Show meets American Pickers." It's always fun to see who will boom and who will bust. And hey, aint that Vegas?
Report abuse
See all reviews
Back to top
Get to Know Us
Make Money with Us
Amazon Payment Products
Let Us Help You
EnglishChoose a language for shopping. United StatesChoose a country/region for shopping.
© 1996-2021, Amazon.com, Inc. or its affiliates