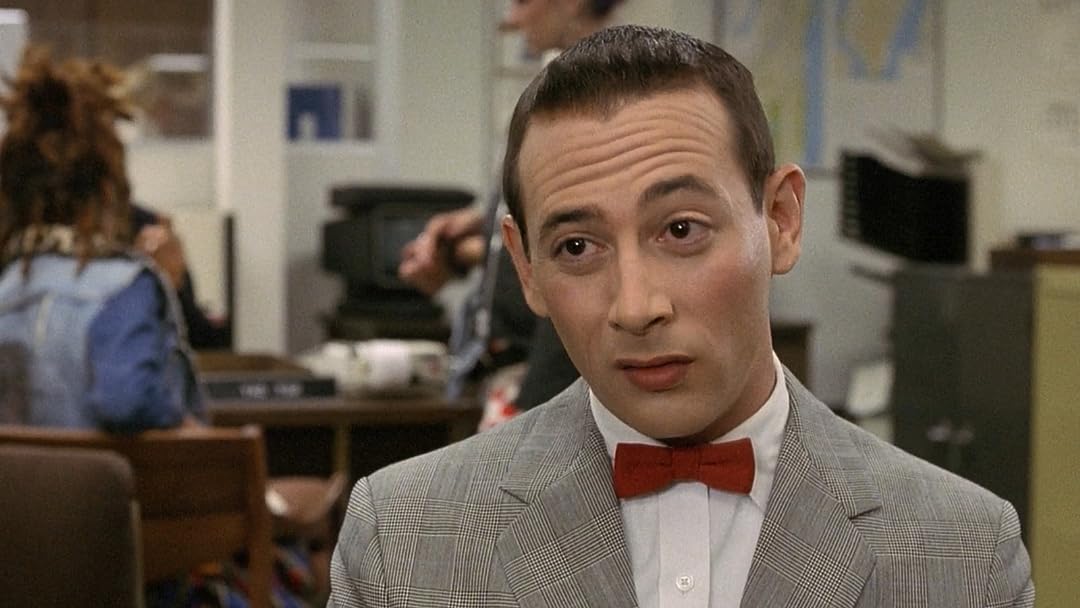 (5,043)
7.01 h 31 min1985X-RayPG
This surprise hit showcases nerdy superstar Pee-wee Herman in a mad-cap comedy-adventure about a unique "rebel" who takes to the road to track down the kidnappers of his bicycle.

P. R SundeenReviewed in the United States on March 4, 2019
2.0 out of 5 stars
Beware of Full-Screen
Verified purchase
I was very disappointed to see the full-screen presentation cuts off some of the original gags. Two that come to mind are seeing the extra chain being pulled through the bike at the bottom, and the highway signs going by 9n an actual track.
12 people found this helpful

SciFi-Kaiju-Guy @ TeePublicReviewed in the United States on December 30, 2013
5.0 out of 5 stars
Simply put: you'll either LOVE it or HATE it.
Verified purchase
BOTTOM LINE: Paul Reuben's bizarre nightclub creation, infant man character Pee Wee Herman, gets his very own big screen debut in this no budget wonder that slipped under the radar back in 1985, putting director Tim Burton & star Reubens on the Hollywood map. The movie will almost certainly entrench viewers into the LOVE or HATE camp with equal ferocity. I'll grant you that it may not be the most pithy or highbrow of scripts nor concepts, but for unashamed silliness it's hard to top this charming, child-like, (and proudly childish), film. And just remember, if someone says you're an idiot for liking this film, you can cleverly respond with "I know YOU are, but what am I??" 5 STARS.

THOUGHTS: Pee-wee Herman isn't for everybody and neither is this oddball little comedy movie from waaay back in 1985. You're either gonna love this silly film and watch it over & over, laughing until your sides hurt... or you'll shut it off minutes after you start watching it, thinking it's absolutely the stupidest thing you've ever seen. Not much middle ground here. You can tell by my rating that I'm a fan who loves this oddball flick. Director Tim Burton really proved his unique talents with this bizarre effort early in his career, crafting a pretty amazing movie with almost no prep time & practically zero budget. Yet everything works somehow. That's saying something, since the movie is essentially a bunch of little comedy snippets loosely sewn together into a surreal, demented "road film." The movie's musical score is a real treat, too. Composer Danny Elfman is another one of those polarizing movie talents; folks seem to either love him to death or hate him with a passion. Here, his score seems so perfectly suited to the visuals that I cannot imagine this film without his musical contributions. This movie wouldn't be half as much fun without Elfman's light, circus-like themes, flawlessly complimenting Burton's cotton candy, fever-dream visuals.

Fans of this film know all the great scenes: Pee-wee's crazy house and the opening Rube Goldberg breakfast scene. Large Marge. The biker bar. The studio chase finale. And they can probably quote most of the goofy dialogue, as well. This movie is harmless silly fun. It never fails to put a smile on my face and makes me laugh out loud every time I watch it, no matter how bad of a mood I may have been in. That's comedy's job and this comedy film does it like few others can. :-)

THE BLU-RAY: This hi-def release from Warner Bros. is a winner. Firstly the audio & video potion of the transfer make this edition look & sound worlds beyond all previous formats. The picture is razor sharp most of the time, with little in the way of pixelation, edge enhancement, artifacting or DNR scrubbing. Blacks are inky & solid and the mid-tones aren't overpowered by the bright eye-popping color palette. The soundtrack is equally clear & clean, and properly balanced between music/sound effects and dialogue. A decent selection of bonus features makes this purchase a no-brainer for Pee Wee fans, and worth double dipping if you already own it on DVD.

Steven StroppianaReviewed in the United States on July 27, 2021
5.0 out of 5 stars
The story of a rebel and his bike
Verified purchase
I've seen a lot of movies in my lifetime. And although "Scarface" is my all-time fave, it would be fair to say "Pee-Wee's Big Adventure" holds an even more distinct honor. As far as bizarre, hilarious, sarcastic, relatable storylines and characters go, this film is IT!!!! To say this movie is stuffed with quotables is an understatement. And the "supporting" casting is spot-on; cameos aplenty-; James brolin. Morgan Fairchild. Phil Hartman. Elvira as Cassandra Peterson. You don't actually have to get Peewee in order to enjoy this movie. As long as you don't have a preconceived notion as to what you THINK you know about Pee-Wee, you'll have a blast. The most prominent feature about this movie is the soundtrack.... Easily Danny Elfman's best score and also his first. Tim Burton's feature film directorial debut. I've seen this movie at least 200 times and that's no joke. No, I'm not a virgin and yes, I have a life. The story is great the acting is fantastic the writing is top-notch and if you get the right addition you'll even see some Hollywood tricks thrown in on the side intentionally. Lots of stagehand oops caught on camera during a take gaffes. You will love this movie I guarantee it. Just tell 'em Large Marge sent ya!!!

Dalton James BousumReviewed in the United States on February 15, 2020
4.0 out of 5 stars
The Best of Pee-Wee
Verified purchase
There’s just a corny, unforgettable charm about Pee-wee that’s sometimes both creepy and hilarious. I grew up watching Paul Ruebens do his thing as Pee-Wee and I must say this is the best thing he’s ever done outside of his television show. Tim Burton brings to this movie exactly what is needed to really show that boyish charm while providing some really strange and creepy moments. It’s a movie me and mom loved watching together. It’s goofy. It’s fun. A good add to the collection.
One person found this helpful

Andrew R. LazoReviewed in the United States on January 20, 2014
5.0 out of 5 stars
Quite possibly the greatest bicycle film ever made.
Verified purchase
As a child, I loved this film for it's silly jokes and imaginative visuals.

As an adult, and a daily bicyclist (commute and recreation), I love this film for Pee-Wee's perpetually youthful joie de vivre -- seeing every experience through the fresh perspective of the young-at-heart. Also, as an adult I'm able to appreciate the subtle innuendo (though very watered-down from his original stage shows) that I completely missed as a child.

But one thing has always rung true with this film: it is a love-letter to bicycle ownership. It resonates with anyone who has ever put the time and effort into making a bike their own. I can empathize with the joy on Pee-Wee's face when he's on his bike. Perhaps most important of all is the pain at the loss of his bike. It is Pee-Wee's reaction to losing his bike that makes this movie, and it is the hyperbole of that reaction that makes it a story that can be fittingly told only through the medium of film. Pee-Wee feels the same pain that we do at losing his loved bike, but he is able to go beyond our real-life constraints and do what we all wish we could: hunt our beloved bike down, come hell or high water, and stop at NOTHING until we are reunited!

Fun fact: during pre-production, Paul Rubens commented on how many people had their own studio bikes that they used to get around the expansive Warner Bros. lot. He was then presented with his very own Schwinn cruiser, which became the basis for Pee-Wee's bike -- and the entire story. Rubens recounts how he immediately went into his trailer, realizing he'd been writing the wrong story, and started over on the plot we now know and love. What's more, apparently that original bike given to Rubens was even used for some of the publicity photos for the film, perhaps explaining why the bike on the cover is so simply appointed when compared with the bike in the film.
10 people found this helpful

Bridget GarrettReviewed in the United States on April 23, 2021
5.0 out of 5 stars
Classic movie
Verified purchase
The best scene in this movie is Peewees”breakfast machine”
Making a funny face out of the pancakes.
Eggs for the eyes.
Strawberry for the nose,&,bacon,for the mouth.
Bryce Garrett.
One person found this helpful

Jonathan MartinReviewed in the United States on October 20, 2021
5.0 out of 5 stars
the best thing since sliced bread
Verified purchase
Paul Ruebens is in perfect form as Pee-wee in this spectacular Big Adventure. It's possibly the most rewatchable movie of all time. This is a feel good comedy about a delightful man child whose most prized possession goes missing, and his quest to return it. The sets, costumes, cameos are fantastic and the filmmaking is unmatched in current cinematography.

Holly HarrisReviewed in the United States on February 27, 2013
5.0 out of 5 stars
PeeWee For the Next Generation
Verified purchase
I loved this movie when it first came out and I watched PeeWee's Playhouse religiously every Saturday.......the '80's were a wonderful time to be a young adult! Now I am the middle-aged mother of a first grader whose tastes and sense of humor are a lot like mine. One day I remembered PeeWee and thought she would appreciate the movie. First we watched the "Breakfast Machine" clip on youtube; she loved it, I ordered the DVD and we have had a lovely mother/daughter dinner & movie evening revolving around this film. We both cracked up over PeeWee dancing on the bar to "Tequila" and now my little one has picked up some prime dance moves never before seen by her classmates.

I think this movie has aged well due to its retro look at the time it was released. Tim Burton is a genius and I have long ago forgiven Paul Rubens for any indiscretions. My next purchase will probably be PeeWee's Playhouse, Season 1; someone needs to learn all about Cowboy Curtis, Jambi, Miss Yvonne, and The Secret Word.

Really, the joys of parenting and getting older are terribly under-rated...anyone who says that your'20's are the best time of your life is soooooooo wrong! Your'40's are twice as good and the rediscovery and sharing of a treasure from my young years with a whole new generation is proof of that.
4 people found this helpful
See all reviews
Back to top
Get to Know Us
Make Money with Us
Amazon Payment Products
Let Us Help You
EnglishChoose a language for shopping. United StatesChoose a country/region for shopping.
© 1996-2021, Amazon.com, Inc. or its affiliates