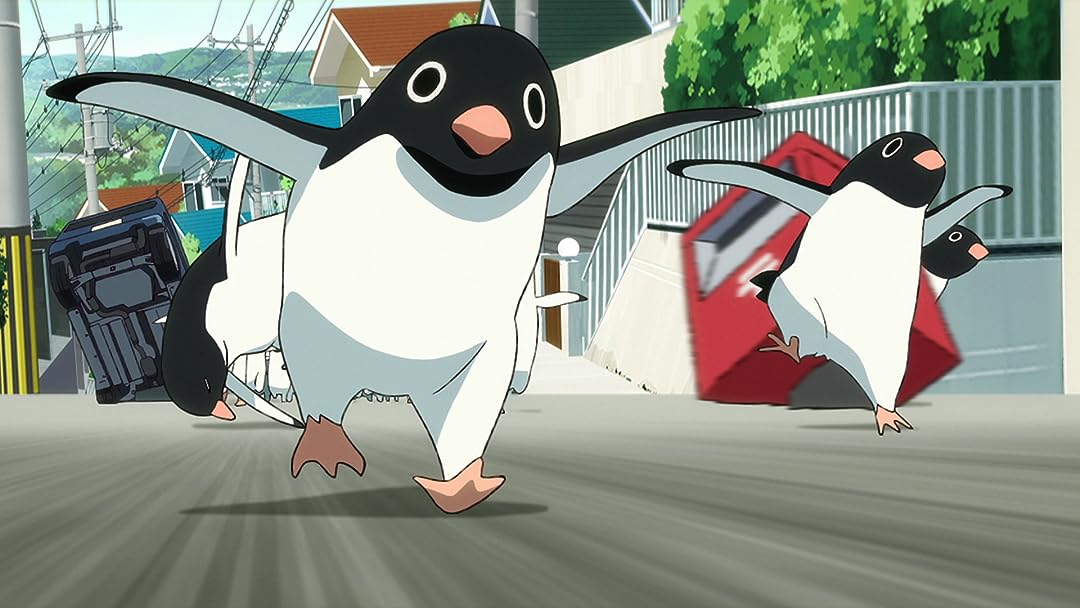 (468)
7.11 h 57 min201913+
Budding genius Aoyama is only in the 4th grade, but already lives his life like a scientist. When penguins start appearing in his sleepy suburb, hundreds of miles from the sea, Aoyama vows to solve the mystery. When he discovers that the arrival of the penguins is somehow related to a mysterious young woman from his dentist's office, they team up for an unforgettable summer adventure!

Jonathan TavaresReviewed in the United States on August 19, 2019
5.0 out of 5 stars
Science (Sci-Fi), Penguins, Boobs.
Verified purchase
I came across the trailer for this movie a few days ago, and thought it visually looked great. Then it mentioned Utada Hikaru (AKA the voice of the Kingdom Hearts theme songs), and I knew I had to have it! (haha!)

(Unlike other posts, I will not "spoil" the movie for you :) The movie focuses on a young and curious minded boy, who takes it upon himself to unravel the mystery of the sudden appearance of penguins in his town. While raising important questions like why some boobs are different sizes than others (which is obviously a question any young scientist must ask him/herself), he uses observation, data collecting, and scientific methods to try and solve the penguin issue. The story line was so creative, that there's no way to really predict what will happen, and makes it a fun, inquisitive ride.

I have to say overall, its a great movie. Though it's based around the life of a child in elementary school, it leaves room for complex and creative thoughts on life and scientific theories. It also shared realistic insight on what goes on in a child's mind, how eager they are to grow up, and how innocent they can be.

I have no idea why penguins were specifically highlighted in this movie, but they were just so cute that I don't care what the reason was. In theory, this movie did have a story end, but may have left enough room for a sequel at some point in the future.

Just FYI , the soundtrack was gentle and appropriate, but as far as Utada's music in the movie, they only used her song for the end credits. I wished they incorporated it into the actual movie at some point. A minor detail, but that's just my opinion.

Storyteller StudiosReviewed in the United States on August 7, 2019
5.0 out of 5 stars
Star Trek, not Lost, and Penguins!
Verified purchase
A beautifully animated gradually unfolding story filled with mystery. The film is both down to earth, personal, and yet filled with scientific and sci-fi wonder. Star Trek fans will love this: what is behind the blue moon, the penguins and the protagonist's friend? At one point, I feared that the revealed mystery would be unsatisfactory, such as in the TV series Lost, but I'm glad to say that this is not the case. The ending is perfect, explaining enough but leaving us with further truths to be discovered. We are left satisfied and yet still thirsting for more! Research continues....scientific discovery is an an unending path! Don't miss this gem of a movie! An interesting take on the space time continuum!
13 people found this helpful

}=)Reviewed in the United States on June 21, 2021
5.0 out of 5 stars
Misunderstood
Verified purchase
Let's start with what it isn't. It isn't a little kids movie, unless they're so young that sexuality concepts go completely over their heads, in which case it's quite extravagantly animated in a way particularly appealling to little kids. It isn't mainstream or for everybody. What it is is a brave venture at something different instead of the thousandth remake and retelling of popular themes. In that regard they went all in, with an "alternative" fantasy/sci-fi world in which is explored the romantic relationship between a 4th grader and a woman, who is later revealed to be an interdimensional alien. Then throw in a portion of love triangle (or square) to round things out, and you see why this is not for everybody. At this point, I think there have been only one or two other anime that have even attempted something this far out. That out of the way, I found Penguin Highway kept me engaged the whole way. Every attribute, pacing, directing, nuance, eye-candy, likability, voice acting, musical score, full dolby 5.1 surround sound effects usage, etc. was all top shelf quality. A lot of reviewers didn't like the open-ended ending, but I don't see how if given, anyone would actually want to see the two protagonists go any "farther".
3 people found this helpful

L. B.Reviewed in the United States on August 11, 2019
5.0 out of 5 stars
Deep Sci-Fi Plot
Verified purchase
This is a multi level film. It appears to be a "coming of age" story filled with magic and mystery. But if you look deeper, its pure science fiction. The writer plays with A.C. Clarke 3rd law, "Any sufficiently advance technology is indistinguishable from magic". "The Lady" is an AI sent to explore our world/dimension. This is why she seems "magical". People seem to be upset about the relationship between "The Lady" and the boy, but she clearly isn't human. It is no coincidence that the boy creates a space ship out of Legos as a probe to explore the "Ocean", and it is the last thing we see in the film. This is a deep and wonderful work of art that hopes to inspire children to explore the universe.
8 people found this helpful

GreenstevesReviewed in the United States on June 28, 2021
3.0 out of 5 stars
Not for Kids!!!
Verified purchase
The movie had sophisticated themes related to science and fantasy, and was well done overall. The main problem area for kids (or even adults who were expecting a more childlike experience), in my view, is that the protaganist, a pre-teen boy who is scientifically inclined, also has a preoccupation with women's breasts.

Humorously, the words in the dubbing often are very different from those in the subtitles. When the boy tells the female protaganist that if she stops eating, she'll become like him, the subtitles say something like "If you stop eating, your breasts will grow smaller." It's clear that the dubbing effort was meant to make the movie seem more G rated, but the subtitles didn't follow suit! In any case, I'd rate this movie more like PG-13.

Even some of the non-sexual themes around science, philosophy, and relationships are bit too advanced for most 7 year olds.
2 people found this helpful

RowdyBirdReviewed in the United States on August 7, 2019
5.0 out of 5 stars
A delightfully absurd dream
Verified purchase
The best anime movie I've seen in at least a few years, though it's not for everyone. There is no neat wrap-up to the plot here. You're going to be left trying to interpret what you've seen, and probably failing. Which I'm okay with, because the portions of the story dealing with friendship and first love work beautifully even if the rest doesn't have a succinct, scientific explanation. Every other aspect is spot-on, too - beautiful art and animation, and perfectly-matched music. If you can overlook (or even revel in) the absurdity of the central premise, you'll probably love this movie as much as I do.
6 people found this helpful

TFranReviewed in the United States on August 20, 2021
1.0 out of 5 stars
Not a Kids Movie But Still Not Good
Verified purchase
Left a similar review on another movie from the same studio. It all still applies here. First off, anyone who thought a movie like this was for kids probably hasn't seen a Studio Ghibli film. While those films are much better, I still wouldn't really recommend them for small children.

I've watched 3 movies done by Eleven Arts over the past 2 days and I've noticed the same things in each one. Each movie, while the animation style is very reminiscent of Studio Ghibli in its warmth and fluidity, is still lacking in multiple areas. These movies are bloated with unnecessary exposition, details that don't matter or make sense, and story lines that are confusing and hardly compelling. The characters were forgettable and hard to fall in love with. It's almost like watching the first draft of a Studio Ghibli film before it gets edited down into something that actually makes sense and moves people. Each movie is about 2 hours long! In all, I wouldn't really recommend that someone spend their time watching any of their movies including this one, but I really do hope that they take some of the critical feedback to heart and work to reach their potential. I don't expect these films to be as good as the ones they're obviously trying to emulate, but I was hoping for better than this.

Human ShieldReviewed in the United States on August 11, 2020
5.0 out of 5 stars
A slow burn, but worth it if you have the patience
Verified purchase
I wasn't sure I was going to like this one at first, because it takes a while for the oddness to get going. Fortunately, the main character was interesting enough to keep my attention until the penguins started to show up and things got rolling. It was fun to watch this little guy go through his life with grave scientific curiosity and detachment, conducting experiments and exploring the world and being completely oblivious to the affections of the opposite sex. Even his fascination with boobs, which is not uncommon for boys approaching puberty, is almost devoid of the normal emotion and sexuality (which is for the best, TBH, given his age and our invisible presence in his life) - he admires and studies breasts the same way he admires and studies anything. Yet, despite this oddness, the movie still manages to get us to relate to him - it puts us in his headspace, but it also makes it clear that he doesn't know as much as he thinks he does and is naive in his assumption that he has life all figured out at his age. Of course, he's not the only show - there's also the mysterious lady and the penguins, and the solution to the mystery does not disappoint when revealed; it fits perfectly the movie's tone of magical realism.
Like I said, this movie takes some patience, but if you can invest that, I think you will enjoy the outcome.
See all reviews
Back to top
Get to Know Us
Make Money with Us
Amazon Payment Products
Let Us Help You
EnglishChoose a language for shopping. United StatesChoose a country/region for shopping.
© 1996-2021, Amazon.com, Inc. or its affiliates