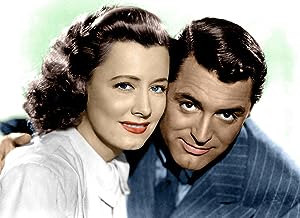 (620)
7.12 h 7 min194113+
Grant and Dunne adopt a baby after their unborn baby dies. Dunne contemplates divorce, recollecting the joys and griefs she has shared with her husband.

John BalesReviewed in the United States on April 23, 2020
5.0 out of 5 stars
Tearjerker ending!
Verified purchase
Amazingly, I had never seen 'Penny Serenade', though I've heard of it all of my adult life (I like old movie) and love both Irene Dunne and Cary Grant movies. It was kind of predictable, you can see the hints of what's coming a mile away, but it was nevertheless moving. Definitely worth seeing for fans of both actors as well as the wonderful actress Beulah Bondi. . You may not immediately recognize her name, but you will the face. She was excellent in the role of Miss Oliver, the social worker, and played in may well know movies between the 1930s and the early 60s.
9 people found this helpful

ChrisSherrillReviewed in the United States on August 30, 2019
4.0 out of 5 stars
Dunn & Grant
Verified purchase
These two actors were so talented.
Something of a roller coaster here. I found myself smiling at times and at other times quite sad. It does tackle a serious issue: the death of a child. Couples often cannot survive the death of a child; either they separate physically or they separate emotionally. The film captures the second with surprising (for the time) accuracy and depth.
It is slow getting started, but it finds its pace and moves well. Early in the film I found myself thinking, 'this is not Cary Grant's best work', and then there was the scene before the judge. Wow! Incredibly moving.
Spoiler alert from here on.
I found the ending lacking in a number of ways. The child's death was not treated well. That letter business didn't do it for me. I'm not even sure of the time frame. Is it the following Christmas? And the very ending is so contrived that it threatens to trash the commendable aspects of the movie. Is their relationship so shallow that they can so easily reunite? Is there no emotional bond between them, other than having a child in the house? I don't think I know anyone in real life who, after suffering the emotional trauma the wife suffers, can just put it on a shelf as if it never happened. Emotional scars run very deep. The ending lost a star, IMO, thus the four stars.

Sally SeashellsReviewed in the United States on June 2, 2016
5.0 out of 5 stars
LOVED THIS MOVIE!
Verified purchase
I thought use of the records disks to tell the story in flashbacks was innovative for it's time. One of the best scenes was Cary Grant going before a judge to plead to the keep the daughter he and his wife keep adopted after it is found he was temporarily unemployed. This scene was so heartfelt because it wasn't like watching Cary Grant play a part, it was him pleading for his daughter. Incredible acting. The scenes where they were new parents was funny and realistic! This movie isn't slapstick. It's more like a slice of life. It shows a young couple falling in love and the trials and hardships that finally pull them apart. My only criticism is the scene that should have been in there: Trina's illness. It felt skipped over by simply putting it in a letter. I think this is where they could have used a couple more scenes to show how it impacted this couples lives. It is old black and white, but if that doesn't bother you, then spend an evening with this. You won't regret it.
18 people found this helpful

OntarioAngelReviewed in the United States on December 21, 2020
2.0 out of 5 stars
Bootleg DVD? IDK
Verified purchase
The disc played well, but Cary’s whole speech in front of the judge was completely cut out! I even tried back tracking and a different player, but that scene was just cut out completely.
The quality of the video recording isn’t that great either. It’s not sharp, there’s the sound of film static in the background, all throughout the movie.
The case looks as if it was used in a library or something. Really disappointed with this used version. I would’ve been okay with paying $5.99 for a Used one if the whole movie was there, but the scene being cut is what makes me mad.
My order says from Jenson Books, so idk how you report a bad seller to Amazon, selling fake DVDs.

Sharon G.Reviewed in the United States on December 24, 2021
5.0 out of 5 stars
Cary Grant and Irene Dunne at their best
Verified purchase
I love old movies, so I am surprised to have never seen this one on TCM or on digital media until now. I think Cary Grant's performance in this film is the best performance of his ever captured on film. He and Irene Dunne are magical together. Yes, it has all the old movie heartstring pulls, but the quality of the casting (including the amazing Beulah Bondi and Edgar Buchanan) make this such a great film and keep it from becoming too sentimental and cloying. The only bad thing is the title which doesn't really appear to have anything to do with the film.
2 people found this helpful

Susan920Reviewed in the United States on July 10, 2021
5.0 out of 5 stars
Oldie but Goodie
Verified purchase
This is my favorite classic movie! Bought a copy for my son
4 people found this helpful

golfclubReviewed in the United States on November 30, 2021
3.0 out of 5 stars
It's ok
Verified purchase
Good story and enjoyable. Guessing more women will enjoy it better than men. A bit simplistic, predictable, emotional. Decent "Chick" flick... which I enjoy so much better than other genres (action, horror, etc).

It does make you consider the importance of children to parents and how children can become the central focus of their relationship... at a cost. [Speaking from personal experience.]

ACWinOHReviewed in the United States on January 1, 2018
5.0 out of 5 stars
Good movie, starts slow so give it time
Verified purchase
I almost stopped watching during the first act as it was a bit slow, and I had my doubts during the first set of memories but so glad I stuck with it. Not sold on the way the story is related but still great film. Best part is judge's chambers. Obvious writer doesn't have adopted child as he kept using phrase "real" parents. Ha! I AM a real parent to the child I raised since she was five months old. Also, disappointed in message that another child can fix a broken or damaged marriage. But I still really liked the movie and would watch again.
4 people found this helpful
See all reviews
Back to top
Get to Know Us
Make Money with Us
Amazon Payment Products
Let Us Help You
EnglishChoose a language for shopping. United StatesChoose a country/region for shopping.
© 1996-2022, Amazon.com, Inc. or its affiliates