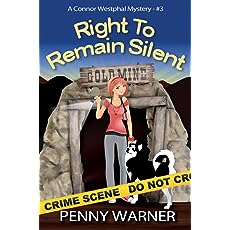 Penny Warner has published over 60 books for both adults and children. Her first mystery series featuring Connor Westphal, a deaf reporter in the California Gold Country, won a Macavity Award for Best First Mystery, and was nominated for an Agatha and an Anthony Award. Books in the series include, DEAD BODY LANGUAGE, SIGN OF FOUL PLAY, and RIGHT TO REMAIN SILENT. All are available on Kindle.

Her other mystery series features event planner, Presley Parker, and is set in the San Francisco Bay Area. HOW TO HOST A KILLER PARTY, offers a wedding on Alcatraz, HOW TO CRASH A KILLER BASH, features a Murder Mystery Party at the de Young Museum, HOW TO SURVIVE A KILLER SÉANCE, presents a Séance Party at the Winchester Mystery House, and HOW TO PARTY WITH A KILLER VAMPIRE is set in Colma, the City of Souls. HOW TO DINE ON KILLER WINE offers a mystery in the Napa Wine Country.

Her middle-grade mystery, CODE BUSTERS CLUB: SECRET OF THE SKELETON KEY, was nominated for an Agatha Best Juvenile Mystery Award. It features four kids who solve a mystery by cracking codes in each chapter. The second book in the series, CODE BUSTERS: THE HAUNTED LIGHTHOUSE, is set on Alcatraz. (Join the Code Busters Club at www.codebustersclub.com.) Her non-fiction book, THE OFFICIAL NANCY DREW HANDBOOK, was nominated for an Agatha Award.

She writes a column for the local newspaper on family life in the Valley, creates fund-raising murder mystery events for libraries across the country, and teaches child development at Diablo Valley College. She can be reached at http://www.pennywarner.com or pennywarnerink@yahoo.com. 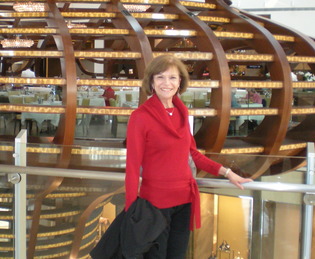 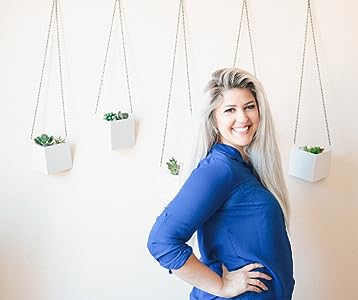 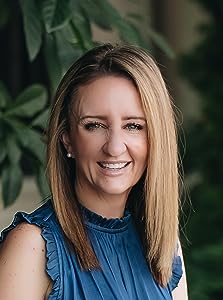 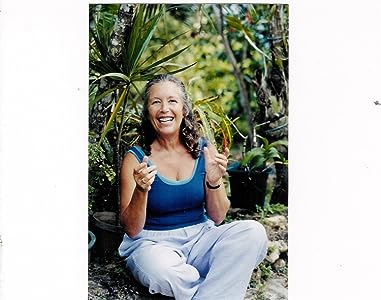 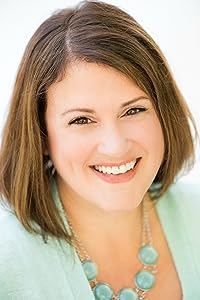 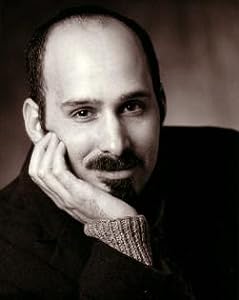 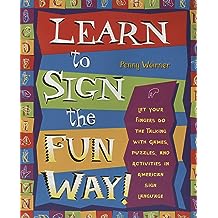 Learn to Sign the Fun Way!: Let Your Fingers Do the Talking with Games, Puzzles, and Activities in American Sign Language Jun 18, 2010
by Penny Warner
( 184 )
$7.99
The perfect guide to signing for everyone!

Never before has learning to sign been so simple and so much fun! Whether you are a teacher or a parent, this lively self-guided book of American Sign Language (ASL) will quickly become your kids' new favorite teacher!

Learn to Sign the Fun Way goes beyond the manual alphabet and teaches the beautiful language of sign—the United States' fourth most pervasive language—in a simple, interactive format. Signers-to-be will discover:

·Great games to make learning ASL an entertaining adventure
·Activities for both the individual and the classroom
·Cool groups of signs that appeal esspecially to kids
·And much more!

Kids love to sign, whether it be to communicate with a hearing-impaired individual or as a "secret" language with their friends. With this illustrated book they'll quickly and easily become signing superstars! Inside are cool signs for kids, including: 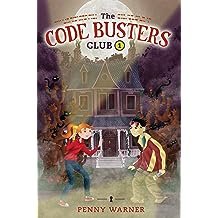 Cody, Quinn, Luke, and M.E. may not have much in common with each other, but they do love playing around with codes. In fact, they love codes so much, they have their own private club, with a super-secret hideout and passwords that change every single day. When Cody and Quinn notice what could be a code on the window of their neighbor's house—the neighbor they call Skeleton Man—the club gets to work. And it is a cry for help! Now the Code Busters are on the case—and nothing will stop them from solving the mystery and finding the secret treasure that seems to be the cause of it all! This exciting interactive mystery offers more than fifteen codes for you to decipher, including the Consonant code, Morse code, and American Sign Language. Test your brain with the Code Busters and solve the mystery along with them. Answers are in the back, if you ever get stuck. 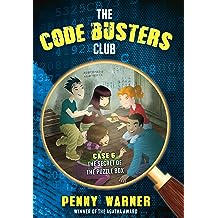 The Code Busters are excited for their class field trip to Angel Island, known as the Ellis Island of the West. One of Mika's ancestors passed through the island's immigration station in the early twentieth century, and Mika thinks he may have left behind some secret messages . . . plus a very special box. But as the Code Busters search for hints from the past, they get caught up in an even bigger secret.

Can you crack the code? Test your brain with the Code Busters to see if you have the right stuff to be an ace detective. Answers are in the back, in case you get stuck. 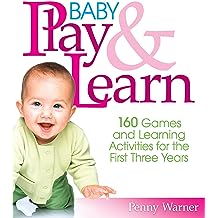 A baby's most rapid period of growth and development takes place during the first three years. That's why child development expert Penny Warner offers 160 age-appropriate ideas for games and activities that will provide hours of developmental learning opportunities and rewards for babies.

For each game and activity, Baby Play & Learn includes:


Baby Play & Learn is designed to help children reach their full potential and have a good time along the way.
Read more
Other Formats: Hardcover , Paperback 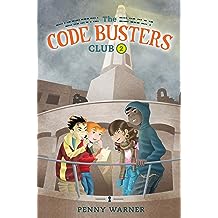 An infamous prison may hold a secret only the Code Busters can uncover.

Cody, Quinn, Luke, and M.E. may all have different talents, but they share one thing in common: they love playing around with codes. In fact, they love codes so much, they have their own club, with a secret hideout and passwords that change every day. When Cody and her friends get a mysterious e-mail hinting at a treasure on Alcatraz Island, they can't wait to get started on their clue hunt. Luckily, a class trip to the prison is the perfect cover to start their search. During the tour, the club members learn that a jewel thief kept at Alcatraz may have hidden his biggest haul on the island and left a series of coded messages to find it. And solving puzzles is what the Code Busters do best! This interactive mystery features more than fifteen codes and puzzles for you to decipher along with the Code Busters, including Morse code, the tap code, LEET, and zigzag code. Answers are in the back, if you ever get stuck. 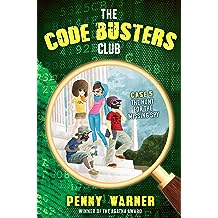 Cody, Queen, Luke, and M.E. are the Code Busters—clever clue hunters with a passion for puzzles. They can't wait for their school trip to Washington, D.C., where they'll get to visit the International Spy Museum. But it seems as if someone is spying on them—or at least leaving coded messages that even the Code Busters can't crack. And once they arrive at the museum, they notice they're being followed by a mysterious stranger. Then a classmate goes missing. Could the unknown spy be responsible? It's up to the Code Busters to find out!

Can you crack the code? Test your brain with the Code Busters to see if you have the right stuff to be an ace detective. Answers are in the back, if you ever get stuck. 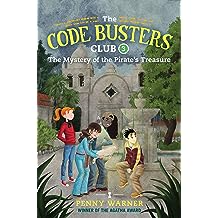 Readers will have tons of fun creating the codes right along with the characters in this interactive series. Cody, Quinn, Luke, and M.E. love playing around with codes. In fact, they love codes so much they have their own club, with a secret hideout and passwords that change every day. On a class trip to the Cornell Mission, the Code Busters learn about Hippolyte de Bouchard, California's only known pirate. Now the Code Busters are on the trail of a new prize: pirate gold! But with a fortune at stake, the codes are bound to be hard. Will the Code Busters be able to figure them out, or will this mystery prove to be too difficult to solve? 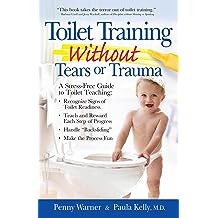 Child development expert Penny Warner and pediatrician Dr. Paula Kelly have developed a simple, easy-to-use method for helping ensure a stress-free toilet-training experience for parents and children. This book provides up-to-date information based on the latest research, including Dr. Kelly's answers to the most commonly asked questions. You'll find "Quick Tips" from experienced parents, information about the latest equipment on the market, and ideas for evaluating your child's readiness. Toilet Training without Tears or Trauma covers all the important topics including: Understanding your child's development; Developing your child's physical skills; Using doll play to enhance the process; Promoting overnight dryness; Troubleshooting problems; Knowing when to call the doctor
Read more
Other Formats: Hardcover , Paperback 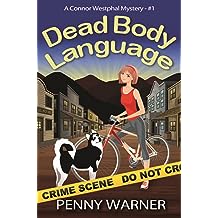 DEAD BODY LANGUAGE (A Connor Westphal Mystery Book 1) May 24, 2012
by Penny Warner
( 23 )
$0.99
When deaf reporter Connor Westphal moves to the California Gold Country town of Flat Skunk to publish her own weekly newspaper, she doesn't expect a murder to be her first headline, But she's discovered a body lying on top of a grave instead of in it. With the help of her hearing-ear dog, Casper, her TTY telephone, and her ability to see what others only hear, Connor investigates the mysterious death, while trying to avoid a cemetery plot herself.

This is book one of an award winning series
Read more
Other Formats: Paperback 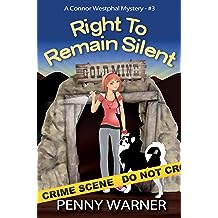 Right To Remain Silent (A Connor Westphal Mystery Book 3) Jun 19, 2012
by Penny Warner
( 4 )
$2.99
Connor Westphal is drawn into another mystery in Flat Skunk when the local historian dies, is resurrected, and dies again! Hot on the story of this unexpected event, Connor stumbles across the murdered woman's son, a deaf man who has been misdiagnosed for years. Working to clear his name for his mother's murder turns out to be more than she bargains for. Staying one step ahead of the killer, locating a missing will, and getting out her weekly paper are all just part of a day's work for amateur sleuth Connor Westphal in the third book of this popular series by Penny Warner.
Read more
Other Formats: Hardcover , Paperback , Mass Market Paperback 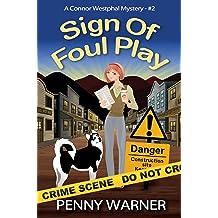 SIGN OF FOUL PLAY (A Connor Westphal Mystery Book 2) Jun 3, 2012
by Penny Warner
( 4 )
$2.99
Last night's earthquake has the California Gold Country town of Flat Skunk buzzing, and over her morning mocha, deaf newswoman Connor Westphal is shaping it into a lead story for her local paper, the Eureka! Then her TTY phone brings more sensational news: a twisted corpse has been found on a construction site owned by her rival publisher, Harlan Truax. What was the soil engineer doing there at midnight, and was it the quake that toppled him four stories to his death? An act of God--or human malevolence. Connor is soon back in the sleuth business, uncovering Flat Skunk's darkest secrets, from toxic dirt to tainted relationships But someone is out to stop her, and they're .saying it with flowers, verses, menacing e-mail -- and a series of murders that could knock the numbers off the Richter scale and silence one lip-reading reporter forever.
Read more
Other Formats: Paperback , Mass Market Paperback 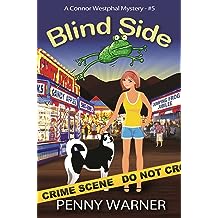 Blind Side (A Connor Westphal Mystery Book 5) Jul 23, 2012
by Penny Warner
( 10 )
$2.99
Buford the bullfrog is dead! Connor Westphal, the feisty deaf publisher of the weekly EUREKA! Jumps into the annual Jumping Frog Jubilee festivities when her sidekick and main squeeze, Dan Smith, is retained by Buford’s jockey to find the “murderer. “ With the help of Sheriff Elvis Mercer and the eccentric denizens of Flat Skunk, Connor and Dan think it’ll be a snap, until the sheriff’s son Jeremiah comes under suspicion-- and a human body surfaces in Critter’s Creek, along with a lot more dead frogs. Connor knows Jeremiah is innocent, and with the aid of a new blind friend, sets about finding out who is killing the frogs--and people-- at Calaveras County.
This is the fifth book in the award winning Connor Westphal series.
Read more
Other Formats: Paperback