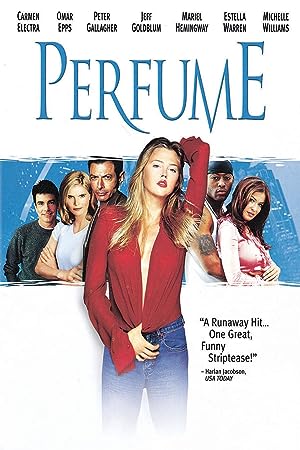 (25)
3.71 h 46 min2001R
A week in the lives of a group of models, photographers, agents, reporters, publicists and other characters during a wild modeling show in New York City.

RR in TexasReviewed in the United States on October 18, 2012
2.0 out of 5 stars
Below Average Movie.....
Verified purchase
Perfume is a ridiculous display of wealthy neurotic NYC yuppies and their self-centered lives. It is a waste of time to watch this one, unless you want to see what is wrong with America today. That these people probably do exist, and have positions with some prestige, is a testament to the decadence of NYC in specific and America in general. This movie is just one absurd, disjointed, and boring scene after another.

The only reason I gave it two stars rather than one star is that it does reveal, albeit in a non entertaining manner, the sick and tragic people involved in the NYC art and fashion world.

Only-A-ChildReviewed in the United States on February 13, 2006
4.0 out of 5 stars
Unexpectedly Ambitious
Verified purchase
Wow, I never expected to find myself in the position of defending a film like "Perfume" which I only watched because Angela Bettis had a small role. But having recently viewed similar fashion industry/magazine films, "Fashionably LA" and "The Intern", I am unexpectedly well versed in this narrow sub-genre. Coming from that perspective "Perfume" is a lyrical masterpiece, both more ambitious and more successful than those two disasters. But since everything is relative this comparison may not translate into anything very useful for the prospective viewer.

First on the agenda is a cautionary statement about the trailer, the DVD cover, and the general promotional campaign. The cast is grossly misrepresented. Carmen Electra is given first billing but appears in only one short scene, a wide shot of her talking to Paul Sorvino. Supermodel Estella Warren is highlighted on the promotional poster but is just window dressing in two scenes. The five biggest parts are played by Rita Wilson, Leslie Munn, Joanne Baron, Jared Harris, and Sorvino, none of whom are even mentioned in the promotional materials.

But promotional misrepresentation, even to this extreme, has no relationship to the quality of the film. What "Perfume" has going for it (like Robert Altman's "Pret a Porter") is success working on two levels, as a glimpse inside the fashion industry and as a metaphorical extension (of what it reveals) to our day-to-day struggle in the competitive world. Whether we are artists, artisans, robots, or drones; each day is one of struggle with external competitors and internal demons.

How well the film works for individual viewers will be determined by the identification process, which will naturally be easier for those familiar with the world of high fashion or with other environments where creativity is exploited for profit.

Although "Perfume" was a scripted film there is considerable improvisation in the performances, with mixed results. For example, Harris and Mariel Hemingway do a photographer/model photo shoot where his improv is excellent and hers is somewhat lame. Although this initially seems like poor directing, on reflection it is more authentic than giving Hemingway carefully scripted lines and a smooth delivery.

"Perfume" is recommended for those who might identify with its setting or its themes. The production design, the editing, and the soundtrack are first class. But if you are annoyed rather than challenged by films with an elliptical storytelling technique and many characters you would do well to give this one a wide berth.

Then again, what do I know? I'm only a child.

ClaytonReviewed in the United States on September 13, 2019
5.0 out of 5 stars
Good movie
Verified purchase
I bought this movie b/c I'm a fan of Angela Bettis (she has a small role in the movie). It is a very good movie. And with so many well known actors and actresses in it, I can't believe that I had never heard of it. I would definitely recommend this.
One person found this helpful

R. FersonReviewed in the United States on March 28, 2017
3.0 out of 5 stars
Just OK
Verified purchase
I haven't enjoyed it much.

Jorge maldonadoReviewed in the United States on April 30, 2015
5.0 out of 5 stars
Five Stars
Verified purchase
Came as promised and fast.

nickReviewed in the United States on August 11, 2014
5.0 out of 5 stars
Five Stars
Verified purchase
great to work with

Audra ThomasReviewed in the United States on May 15, 2006
5.0 out of 5 stars
A Glimpse Behind the Scenes...
... of the giddily-demented and lunatic world of high fashion along with its tandem industries, where all the egos come "super-sized". Always with personal dramas big enough to match, as everone is truly an "artiste"... of one type or another, and ALWAYS facing a career-altering and earth-shattering crisis of some kind, it's as if they're all living on some isolated island... cast-off from the real world, sucking-up all the abundant co-dependent and self-perpetuating "it's all about me" energy available just to remain alive, slowing sinking into their own self-importance; they are collectively their own eco/ego-system... but so many of us actually listen to what they have to say!!! Their pronouncements are biblical in proportion. I must admit that I watched this film three times, back-to-back, totally absorbed and fascinated.The many wonderful actors, obviously with specific real people in mind and drawing upon same, superbly paint their characterizations in broadly egocentric stokes, creating a rich glimpse into the closed, insular ghetto-ized world of high fashion, where everone is a STAR... or at least believes themself to be, and certainly behaves "as if ". BRAVO!!!
5 people found this helpful

R. K. TamReviewed in the United States on May 27, 2002
3.0 out of 5 stars
Silly, I don't really use it, I bought it for the bottle!
I had been waiting for this movie to hit the theaters after having read about its showing at Sundance, and was quite surprised to see that it went directly to dvd. Especially with such a deep cast.
At first I couldn't tell whether it was a comedy or docudrama. Having seen it I still wonder.
Rather than one storyline this movie is about several. There is the designer (Rita Wilson) whose partner (Leslie Mann) has left her to seek fortune elsewhere. There is the Versace-esque Italian designer (Paul Sirvino) who must face health and family crises. There is the photographer (Jared Harris) juggling work and personal relationship. Then there's the magazine editor (Joanne Baron) whose abandoned daughter (Michelle Williams) suddenly reappears in her life.
Director Rymer wants to give the audience an inside look at the fashion industry, and he does accomplish this on several levels. The designer's assistants following her everywhere; the brief but very real segment of shuffling seating assignments for a fashion show; the editor's assistant (Angela Bettis) screening for her worshipped boss. Some of the exchanges are readily identifiable to all (photographer and girlfriend), some are true-to-life but foreign to those outside the industry (designer and her assistants) but some are so last season (conglomerate quoting Henry James).
What this film needs is more attitude. We see the backstabbing and false niceties, but the only part of the movie that reflects the snobbishness prevalent in the industry is at the reception desk at the magazine office.
Those without first-hand experience with New Yorkers might doubt the dialogue, but it is largely faithful. It is however also highly inconsistent--at times the scenes, the ones that worked, seemed unscripted (reportedly there was some improvisation) and at times it is so spoofy goofy you wonder how many different writers were behind it. Because of the quick pace, you pay attention to the exchanges and not overly scrutinize the acting. You won't get to see too much of the inner workings of the fashion industry, but you could familiarize yourself with its personalities. If you don't sigh paying two bucks for a bottle of Evian, then surely you can have some fun with this movie.
Summary: Like New York and the fashion industry, fast and fun, but lots of loose threads.
Note: Don't be fooled! Carmen Electra's name appearing on the main credits (i.e., cover of the dvd) is ludicrous and an obvious marketing ploy. She appears in just a couple of scenes and a total of maybe five minutes in the movie. The same could be said with several others...Estella Warren, prominently featured as the poster girl for this release, is merely in an opening scene and a closing one. One glaring omission in the main credits but a standout in the movie is Jared Harris, who gave a very convincing performance as the fashion photographer having to deal with egos on the job and go home to a girlfriend whose demands he can't quite satisfy.
DVD note: very standard fare, no bonus material, which is disappointing, considering there must have been a ton of unused footage.
9 people found this helpful
See all reviews
Back to top
Get to Know Us
Make Money with Us
Amazon Payment Products
Let Us Help You
EnglishChoose a language for shopping. United StatesChoose a country/region for shopping.
© 1996-2022, Amazon.com, Inc. or its affiliates