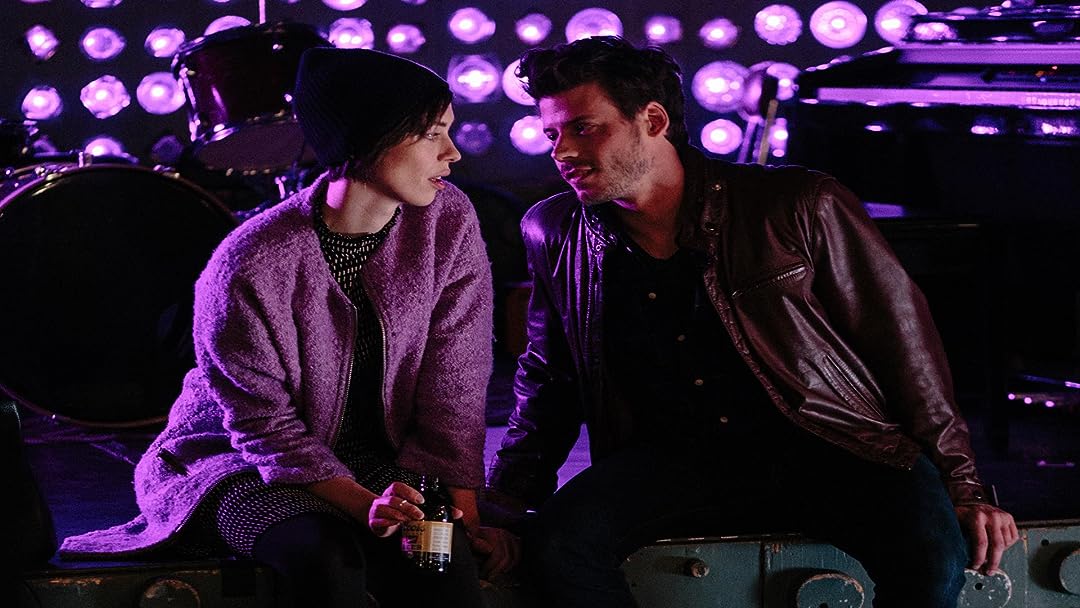 (190)
5.31 h 38 min2018X-Ray18+
A woman on the brink of a marriage proposal is told by a friend that she should date other men before spending the rest of her life with her boyfriend.

Lawrence RobertsReviewed in the United States on August 17, 2021
5.0 out of 5 stars
Great movie, but don't try this at home!
Verified purchase
Great movie, but don’t try this at home.
I really enjoyed this movie, and watched it a second time. Rebecca Hall and Francois Arnaud were excellent in their roles. The chemistry between Anna (Hall) and Dane (Arnaud) was really great – but that is not what made the movie great. It only made Anna’s decision at the end more difficult and courageous. Anna and Will have been together since they were old enough to date, and she is now 30. Neither have experienced any kind of romantic relationship outside of this one, and they are about to settle into a home that Will has remodeled and get married. Anna is nearing completion of her thesis in the history of music, and on her way to an academic career. Then, at her 30th birthday celebration the lover of her gay brother suggests that they should experience some outside sex before settling down together for ever. “There is no risk, you love each other” he says convincingly. Will first takes the initiative in suggesting they try it but Anna gets involved in the first outside encounter with a musician/composer named Dane. Meanwhile, Will who is not nearly as interesting or charming as Anna, stumbles into an evening with a divorcee (Lydia) who comes to his shop and lures him into her home. Anna and Dane have wonderful sexual chemistry, but Will and Lydia not so much. Ok – SPOILERS AHEAD! Anna has a second affair, a quick encounter with the owner of an art gallery, but it goes no where because he is cheating on his wife, whereas Anna has permission to have outside sex. Will gets propositioned by a bar maid, and again has some less than satisfying sex. “Is that it?”she asked when the short romp is over. Clearly, Anna is much more flexible, much more independent, and more able to enjoy the experience with others than Will, whose dependency on Anna and his relationship with her now starts to show. Some of the low ratings were due to it being a cliché ending. No, it was not cliché. The cliché would have been for them to realize they were truly in love, didn’t want anyone else, and stayed together after playing with, and hurting, others. That did not happen. In fact, I thought the ending that it did have is what made it a great movie. Anna first rejects Dane’s invitation to enter a dating relationship, then she changes her mind about accepting Will’s almost plaintive proposal for marriage. That is not the happy ever after cliché. Will Anna go back to Dane, and enter a relationship with him? I don’t think so, or certainly not a monogamous one immediately. I don’t think she wanted another commitment at that time. Her professor challenged her about her thesis work “what do you want? Get it together.” The way I interpret the ending is that Anna realizes she has never explored her own wants. She has drifted along with Will, indeed a very nice guy and who has a successful business and truly does love her. By encouraging her to play piano again, Dane has made her realize that she may have abandoned that dream too soon. Not only is she questioning a life and family with Will, but she is questioning whether she wants an academic career teaching music history. She has found independence and wants to create and explore her own dreams rather than to wrap her life around that of another man. She was by far stronger and more adaptable than Will, and probably even Dane. She was by far my favorite character in the movie, and Rachel Hall portrayed it brilliantly. In the background of this, there is also the breakup of her brother with his gay lover over the issue of having a child. It was quite a captivating and intense movie about the fragility of love and of relationships when the partners don’t grow in the same direction.
13 people found this helpful

shane noticeReviewed in the United States on January 2, 2022
1.0 out of 5 stars
Reverse engineering of biology.
Verified purchase
This movie is simply changing the traditional/biological dynamics of how heterosexual relationships work. Everything in this movie is predictable because female nature dictates that women aren't attracted to weak men. This is literally two teenagers stuck in late-20ish bodies, each hooking up with adults of the game.

People are allowed to do as they please, but if a woman you are in a relationship has entertains or has sex with another man, the respect is gone and the end of the relationship is inevitable. Sadly, this only further perpetuates the weakening of masculinity in our society. Disgusting.

Glama PussReviewed in the United States on August 3, 2021
1.0 out of 5 stars
Boring, slow, stupid and...
Verified purchase
a total speed-thru. Gee they broke up after all their 'experimenting', who could have predicted that? I could have sworn the one gay guy was Robert Downey Jr, or is he a clone? Call me conservative but if you're in love you dont play around and destroy a relationship on the basis of one challenging comment. DO NOT recommend.
8 people found this helpful

star80Reviewed in the United States on October 15, 2020
2.0 out of 5 stars
Rent, It’s One & Done
Verified purchase
Not much here to come back for. I watched it for Dan Stevens. It’s not terrible but not good either. The gay couple have the better storyline. No heterosexual chemistry anywhere. And apparently viewer is to believe Steven’s character has very little interest in sex and bedroom abilities of a fourteen year old boy. He seems to be looking for Mama and she doesn’t seem to
Know what she’s looking for. But good sex makes her feel better. Then there’s the ending. Movie for most ppl will not be something you’ll watch more than once.
7 people found this helpful

septimusReviewed in the United States on July 24, 2021
4.0 out of 5 stars
Rebecca Hall is a revelation
Verified purchase
I suspect many of us who watch way too many movies for our own good and have grown immune to industry or social media hype recognize Rebecca Hall as the real deal, as one of the greats in our generation. Watching her live on stage is near the top of my bucket list. In _Permission_ she has probably surpassed herself; her florid hand/arm gestures wouldn't be out of place on a stage, now folding into herself making her small, now spreading like a butterfly's wings. Every scene with her is like a dance improv, intoxicating to watch. Alas, she is not in every scene; the rest of the film is not at that level. (I should credit Dan Stevens for deliberately playing the dull straight man, as her foil, though. He keeps very still though he himself has ample experience on stage; I once saw him playing opposite Jessica Chastain in "The Heiress" on Broadway.)

And that has been the problem with Hall for some time. For such a great actress, it is sometimes hard to pinpoint her signature work. My vote is for "Parade's End"; her role in Stephen Frears' _Lay the Favorite_ was distinct too, and she got much deserved recognition for _Christine_ (although the film-making there is mediocre at best). But where is Hall's _The Tree of Life_, _Zero Dark Thirty_, _Miss Sloane_? I hope she seeks out the truly good directors to work with, and not be content with the crowd she hangs out, the SNL alumni and so forth; they are just not in her league.

a_gurl_knows_thingzReviewed in the United States on November 5, 2018
3.0 out of 5 stars
Meh
Verified purchase
It’s an interesting movie; however, there’s no real chemistry between Dan Stevens and Rebecca Hall.

Anna’s gay brother wants so much to have a baby but his partner doesn’t. It’s heart wrenching. I was surprised the movie showed two men having sex. Hollywood tends to steer clear of male on male sex because no
matter how tolerant people profess to be, gay male sex is apparently still taboo. I think that’s why Hollywood movies and television focus on lesbians. Which is dumb. Brave movie to show two men together! I wish the movie had been about the gay couple more. It would have been much more interesting.

The ending is somewhat ambiguous but it does leave you with the impression that Anna is being drawn to one man more than the other. It’s an okay film but not five star for me.
5 people found this helpful

AnonymisterReviewed in the United States on July 19, 2021
5.0 out of 5 stars
Five Stars as a Cautionary Tale - Spoiler
Verified purchase
This is what happens when a couple opens without proper preparation and a solid relationship. This couple could very well have succeeded if a) they didn't open or b) they just broke up before all the drama. Now, they are in the unfortunate place of being exes and there is no chance.
3 people found this helpful

andreaReviewed in the United States on April 18, 2018
3.0 out of 5 stars
Lacked something
Verified purchase
I love all of the actors in this movie but the movie was lacking something more significant. I thought the whole storyline could have used something else, like a bigger motive as to why these people just up and decided to do the things they did. It seemed too impulsive and rash for people who have been together for so long to just throw it all away, even if Francois Arnaud IS a complete stud. Maybe I missed something but this is what I took away from my first watch.
4 people found this helpful
See all reviews
Back to top
Get to Know Us
Make Money with Us
Amazon Payment Products
Let Us Help You
EnglishChoose a language for shopping. United StatesChoose a country/region for shopping.
© 1996-2022, Amazon.com, Inc. or its affiliates