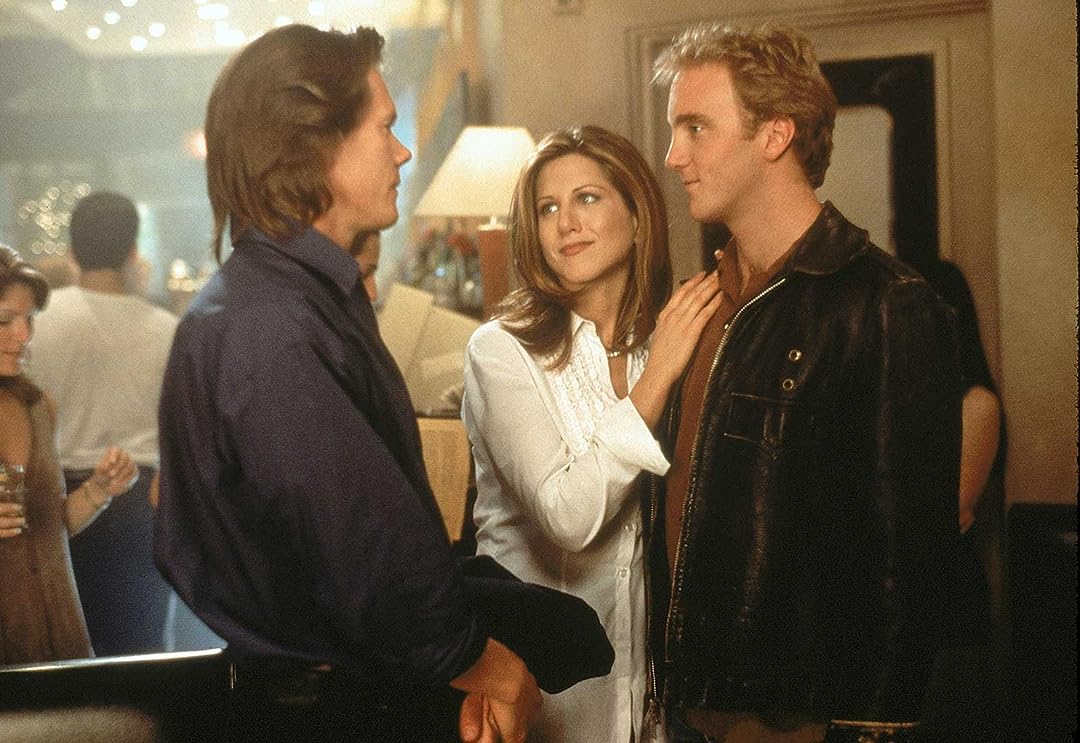 (834)
5.51 h 41 min1997X-RayPG-13
An ambitious advertising exec is deemed too unstable for a promotion - so she asks a young man to pose as her fiancée in order to appear more grounded. But what happens when true love enters the scene? With Kevin Bacon.

Benjamin D. LottReviewed in the United States on May 30, 2015
4.0 out of 5 stars
A successful rom-com
Verified purchase
I must admit, I'm a sucker for romantic comedies. There's something magical about that fantasy world where man and woman have some kind of meet-cute, and then something tries to pull them apart while we're desperately hoping they will come back together. Picture Perfect is exactly one of those films and I find myself smiling throughout. It is the story of a career-focused young woman played by Jennifer Aniston who can't seem to move ahead because she is too much of a free spirit, and it seems everyone in her life wants her to create some roots. This leads her to invent a fiance based on a picture she had taken with a stranger, played by Jay Mohr. It's a crazy concept but I like how it seems that every person in her life wanted nothing more than for her to be tied down, and once the lie starts everything falls into place for her. However the magic of the story doesn't really get rolling until Jay Mohr enters the film full time. He's not the type of actor I would expect to be cast in this role, because he doesn't get many comedic moments, in fact he's usually the straight man. Despite this casting against type, I find him absolutely delightful. His lovable demeanor is exactly what is needed to break through the wall that Aniston's character is putting up.

Jennifer Aniston is great as the somewhat neurotic star of the film. She certainly seems like the result of someone being over-protected by her mother (played in this film by the wonderful Olympia Dukakis.) You can sense her emotions pouring out despite the efforts of her character to hide them, and that's really the most important thing in a rom-com. Also, while it's not something I would ordinarily notice in a film, I thought the wardrobe department teamed up perfectly with the hair and makeup department to get Aniston's look just right. She starts out the film with a very innocent and even childish look. Then as her character starts to "grow up" her appearance matures with her. I also have to give some credit to the script-writers because I think they did a nice job of putting some realistic dialogue that makes sense in the film despite the over-the-top wackiness of what is happening. It really shines in the dinner scene where Aniston and Mohr are saying one thing to each other, but we can read between the lines and tell exactly what they mean. I'm not sure why Picture Perfect was not that popular when it came out, but I think it has all the elements people look for in a good romantic comedy. Yes, as with all films in the genre, it is very predictable but it has a great deal of charm and gives you a few of those "aaawww" moments that melt your heart.

SydneyReviewed in the United States on June 1, 2020
2.0 out of 5 stars
content info
Verified purchase
Cute concept but there is a lot of swearing and though it's part of the plot, the main girl really comes across so whatever at times. I wish Kate (Jennifer Aniston) and Nick (Jay Mohr) moments lasted longer. He is the highlight of this movie.
So if I'd say if you can find the TV version that'd be better because it cuts out alot of the junk/swearing.

Dr. BraxyReviewed in the United States on March 13, 2003
4.0 out of 5 stars
A Lawsuit Waiting To Happen, But Oh So Funny!!!
Verified purchase
I love Jennifer Anniston and Jay Mohr, so this movie is a treat from the beginning. The initial premise is somewhat hackneyed in that Kate (Anniston) is an obviously talented employee at Mercer Advertising. She is quick and full of ideas and an absolute dream person. Yet, after coming up with the killer idea that gains a large account for her company, she is flatly told that she can't work on the account. Why? Because she isn't married, driving an expensive car or struggling with a house payment she can't afford. Her boss (wonderful Kevin Dunn) insists that there is nothing holding her to the company and she therefore can't rise.
If you don't know, this is a dream, open and shut case for any civil attorney. A blatant act of discrimination.
Kate goes off to a wedding, and has her picture taken with Nick (Mohr) the photographer. Her co-worker gets the idea to lie to Mercer saying Kate is engaged to Nick and that wins her the promotion that she deserves. All is well until Nick saves a child from a burning building and prompts Mercer to ask to meet Nick. So Kate offers to pay Nick to pretend he's her fiancee, then pick a fight and break up with her.
All is well until Nick actually falls for Kate.
Other than the implausible concept that gives the movie its start, this is a warm and truly engaging film that will have you watching over and over. Highly Recommended.

Dee Rivers-YowellReviewed in the United States on June 14, 2013
3.0 out of 5 stars
A pleasant, hangin'-at-home chick flick, spiked with Aniston-Bacon chemistry
Verified purchase
Predictable? Yeah. Typical Aniston film. Yeah. Still, it was enjoyable as a night-at-home chick flick.
Aniston's on her way up in an advertising firm, where Kevin Bacon is a sexy co-worker. Sexxxy.
Her life becomes complicated when, through some communication snafus, the company is
led to believe she's engaged to a fella she's only met in passing. The bosses love the idea; it
makes her seem more serious, more likely to stay around, and so they mandate a dinner to meet the
lucky young man. Meanwhile, hot mattress romps with Bacon proceed apace. She visits the non-suspecting
acquaintance, explains her plight, he agrees to show up and play the part. It's at this point where
the vine of lies begins to take over Aniston's character's life and lead her to valuable truths she must
embrace, if the qualities of a meaningful life are to be hers.
2 people found this helpful

ChloeReviewed in the United States on July 17, 2018
5.0 out of 5 stars
Good working DVD
Verified purchase
This is possibly my favorite movie with Jennifer Aniston. DVD works great and I've watched it multiple times with no problems.
2 people found this helpful

JEANNETTE HOEYReviewed in the United States on February 5, 2021
5.0 out of 5 stars
HILARIOIS
Verified purchase
LOVE THE STORY. JENNIFER PLAYED A GREAT ROLE. JAY WAS VERY SEXY IN THIS MOVIE.

MISTYCATReviewed in the United States on October 6, 2009
5.0 out of 5 stars
Just Love This Movie!!!
Verified purchase
Something about this movie that you can really identify with - for the ladies anyway. I have watched this several times and I sure can see alot of me and/or my friends in this movie! Sad or true, good or bad - it is all some of what we have done at some point in our lives! What a great ending. And J Mohr - love him! He is adorable in this! Course- Keving Bacon is always great - and I loved him and his character in this - very sexy I thought!
Just a great film, funny, sad, real true to life feelings in this that alot of us may not want to admit or face about ourselves... buy it ladies!
2 people found this helpful
See all reviews
Back to top
Get to Know Us
Make Money with Us
Amazon Payment Products
Let Us Help You
EnglishChoose a language for shopping. United StatesChoose a country/region for shopping.
© 1996-2021, Amazon.com, Inc. or its affiliates