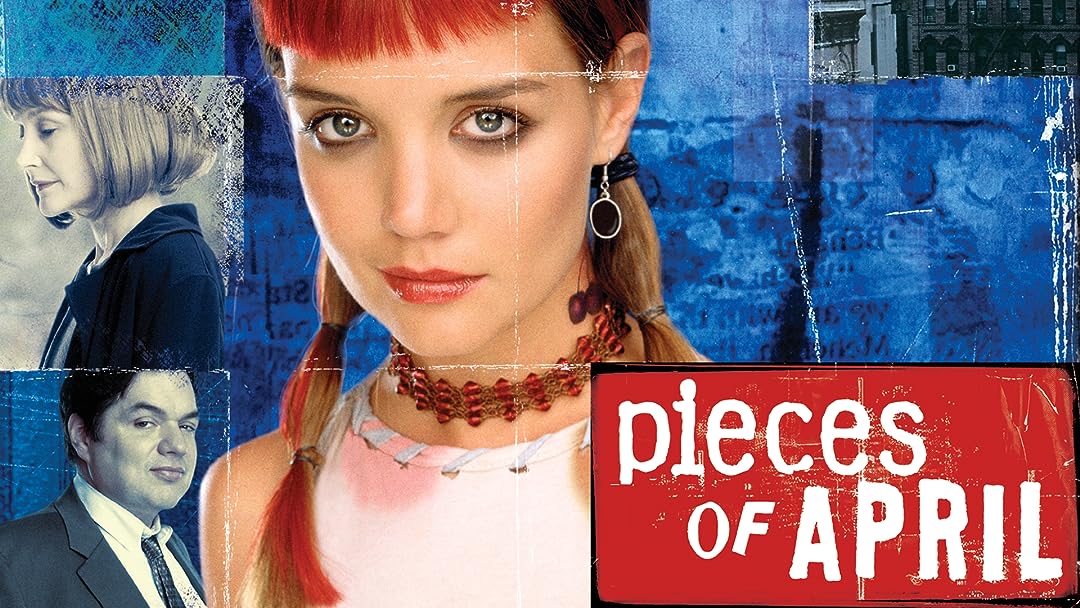 (400)
1 h 19 min2003PG-13
Katie Holmes and Oscar nominee Patricia Clarkson star in this drama about a dysfunctional family's Thanksgiving gathering at the apartment of their punkish daughter.

EmmieReviewed in the United States on September 17, 2020
5.0 out of 5 stars
Fantastic feel good movie.
Verified purchase
If this movie has been just Patricia Clarkson on the edge of her own morality not giving a damn about just about everything, I'd have loved it.
If it had just been Patricia Clarkson seeing the little girl in the restaurant bathroom and automatically jolted to attention by the girl's plaintive "Mom!", the long moment while she processes that, it would have been enough.
But we have a whole apartment building of people to enjoy! There's also the nasty, "I'm the center of attention" sister who thinks April should be literally shunned. She's killed herself all her life to be a good girl and has no idea how people really make connections. Joy is her, liberated by having terminal cancer.
This is by far THE Katie Holmes movie for me. Derek Holmes was spectacular, especially while expounding on being in love and the effect it has on you, in a voice full of wonder.
I'm not going to cover every inch of the movie but rest assured, this is a movie to see. I love that Peter Hedges didn't feel the need to bludgeon us with what he wanted us to see/feel/understand. That's good directing.
You might want to watch it right before Thanksgiving.
Patricia Clarkson is always good and is so under estimated. She deserved the Oscar for this, if only for the bathroom scene. *All the stars!*

UBUReviewed in the United States on October 27, 2017
5.0 out of 5 stars
Great movie, Made me cry. Yet
Verified purchase
I loved it. It was very touching how some loves are unconditional from people who are not family. Yet when its a family we tend sometimes to set standards or some expectations on how another family member should think, live and act and if they are even a bit outside that we are disappointed. We need to realize we are all unique human beings and we need to just cherish and love each other exactly how we are even when they if they are not what we wanted them, imagined or expected them to be. It made me cry at the end, don't want to go into details, but it was worth watching and it inspired me to have a gathering and/or do good deeds. Plus hug my loved ones. Cherish all the moments, and not wait until it too late or something tragic happens.
19 people found this helpful

lawrence chanReviewed in the United States on November 28, 2019
5.0 out of 5 stars
10 Stars. Clever, poignant, funny trip down memory lane.
Verified purchase
It’s an intelligent and sensitive script about family dysfunction and healing set against the backdrop of a NYC that has all but vanished.

The characters are genuine and believable; the gritty complexities of their respective personalities are fleshed out with an uncompromising eye aimed squarely at the truth but tempered with a buffer of witty humor.

This is not a movie that relies on the broad paintbrush strokes of saccharine comedic laughs, it is not a Miracle on 34th Street or It’s A Wonderful Life; this is a rare cinematic achievement that is decisively contemporary but doesn’t get boxed in by the conventions of relevancy at the expense of being deliciously entertaining.

The plot dispenses with gratuitous overstatement and excess psycho-babble introspection.
The finely honed character development delivers beautifully articulated personalities that are revealing and in perfect sync with the rhythm of the script.
5 people found this helpful

Kira S.Reviewed in the United States on December 11, 2017
4.0 out of 5 stars
Low budget but very good movie
Verified purchase
I have always loved Katie Holmes (except during her Tom Cruise years; we'll not speak of that) and she does a great job, along with Patricia Clarkson and Oliver Platt, in this low-budget but overall very good movie about a prodigal daughter who wants to make peace with her family, and particularly her mother, since her mother has cancer and this could very well be her last Thanksgiving. There are enough comic moments to keep the movie from getting too maudlin and enough poignant moments to bring a tear to the viewer's eyes. It's not something I would watch as a feel-good Thanksgiving movie. In fact, April would actually be a good time to watch it. Just about as far from Thanksgiving as you can get.
9 people found this helpful

manhattanReviewed in the United States on November 26, 2018
5.0 out of 5 stars
what a wonderful movie
Verified purchase
This was wonderful! It's hilarious, gross, touching. The way the camera makes the food preparations look disgusting is phenomenal. Never has perfectly ordinary food looked so revolting. The relationships are beautifully various. And then there's people's capacity to grow. Patricia Clarkson's character's moment of realization (I won't say of what) was perfect. And the Katie Holmes character, so dislikable in so many ways, is nevertheless both likable and lovable. Her attempts to explain Thanksgiving to Chinese immigrants were so well done in the way they evolved. All the performances were good.
5 people found this helpful

MalayagroveReviewed in the United States on January 21, 2021
5.0 out of 5 stars
Gosh --
Verified purchase
everybody's a critic as they say (looking at you, one-star people). So no - this movie is not dark and edgy. It's just very human and, to me, well written, staged, acted, and directed. Lots of street cred, not that I would know, particularly. But I too had a cold mother and was the black sheep so they had me at turkey freakout and black boyfriend.

The whole cast, featuring some of my favorites--Holmes, Clarkson and Platt--was great. (What do people want??) I also enjoyed the new to me actors. Derek Luke as the boyfriend was charming and John Gallagher the brother was hilarious. And on and on.

So-- thank you, Peter Hedges. This was just the anti-depressant I needed.

TwoCentsTomlinsonReviewed in the United States on December 27, 2021
5.0 out of 5 stars
Pieces of April
Verified purchase
Sometimes family members can't move past a child's behavior even though it happened during volatile teenage years. Doesn't matter if 40 years have gone by and they're no longer a bad kid but an adult who's lived a happy, productive, decent life. But then there are families like this one who put themselves out there one last time not expecting anything good to come of it but come to see their lovely daughter, tattoos, piercings, and all for the good person she genuinely is. Made me cry. Really good movie.

Bhatta's ReviewsReviewed in the United States on September 27, 2019
4.0 out of 5 stars
Quirky yet worth watching!
Verified purchase
Maybe for me it was the character "April" portrayed by Katie Holmes or just the overall entertainment value in the movie which has playful humor, little bit of emotion, comedy, drama all combined in right balance giving you that nice movie watching experience which does not force you to skip or feel bored wanting for the movie to end.

I am not sure if I would like all the characters or how the food was prepared in the movie but certainly Katie Holmes who played the role of April did manage to put all the pieces together :) and made this movie worth watching.

Rating movie experience with four stars!
2 people found this helpful
See all reviews
Back to top
Get to Know Us
Make Money with Us
Amazon Payment Products
Let Us Help You
EnglishChoose a language for shopping. United StatesChoose a country/region for shopping.
© 1996-2022, Amazon.com, Inc. or its affiliates