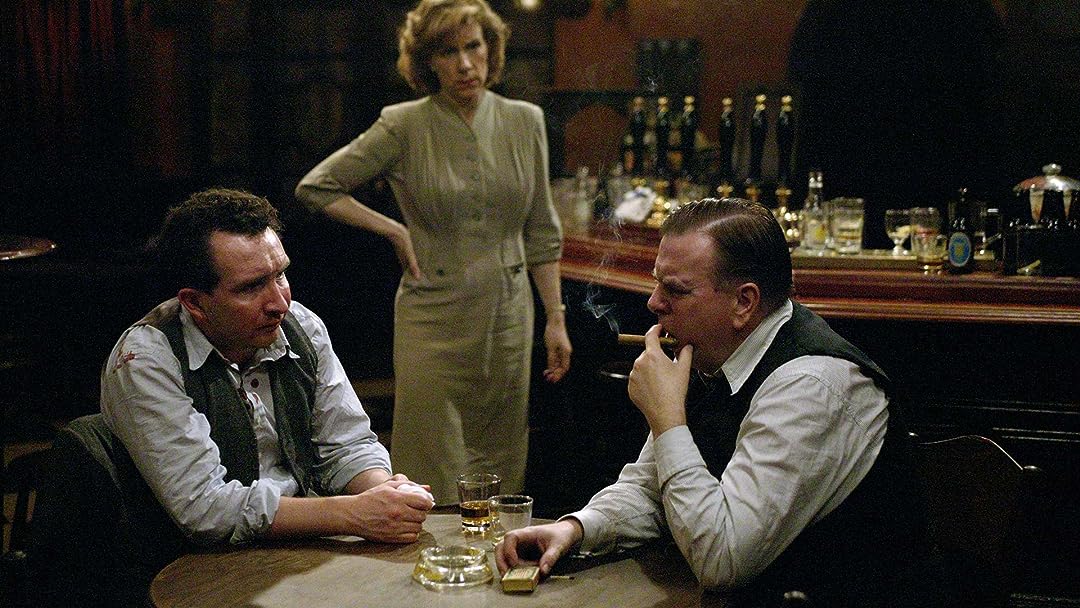 (900)
7.41 h 35 min2007R
An eccentric offering from the Toronto Film Festival, this gripping film chronicles the life of Albert Pierrepoint, Britain's most prolific hangman.

Jeff A. LeeReviewed in the United States on July 17, 2018
3.0 out of 5 stars
I rather enjoyed this movie
Verified purchase
Watching this film for entertainment, I can say that I rather enjoyed this movie, despite the historical inaccuracies (which is why I can't give it more than 3 stars). The acting was well done though. I have read Albert Pierrepoint's official autobiography several times and this movie does not comport with his own words. The movie shows Pierrepoint's first execution as assistant to one of his fellow students and then having to take over for him when that student lost his nerve. This did not happen the way it was portrayed. In fact for the first several years of his career as a hangman he was an assistant, but it was to his Uncle Tom Pierrepoint. The movie shows the execution of Dorothea Waddingham being carried out by Albert Pierrepoint. She was actually hanged by Tom Pierrepoint, Albert's uncle. The events surrounding the hanging of the 13 condemned Nazi camp guards in Hamelin, Germany was also inaccurate. Irma Grese, "the beautiful beast of Belsen" is portrayed as taunting Pierrepoint by saying, "You do the Jew's work for them!". Again, according to Pierrepoint's own words from his autobiography, she never said that. He described her as being as bonny a lass as you could hope to find, jovial and polite. Pierrepoint stated that each was brought out to be weighed and measured singly not all together as was shown in the movie. Pierrepoint describes the embarrassment he felt asking Irma Grese her weight when she smiled at him, he realizing the embarrassment of asking a woman her weight. Finally, Pierrepoint's assistant at the hanging of these Nazi war criminals in the movie is stated to be "Lieutenant Llewellyn". I remember his name was Regimental Sergeant Major O'Neil, again as per Pierrepoint's autobiography. I can almost understand this last one as perhaps they could not get O'Neil's permission to use his name in the film; a legal issue. Also, hangings continued in Britain for 8 years after Pierrepoint's resignation; ending in 1964 with two hangings at the same hour at different prisons, by two different men, so no one man can claim to be the last hangman. I understand and accept that it would not be possible to show all the events of his life that Albert Pierrepoint did, (the movie would be too long) but you would think that the filmmakers could at least get the events they portray right. That has always been my biggest pet peeve about motion pictures based on historical events and persons, the filmmakers always take too much "artistic license" in portraying the events. Other than that, I did enjoy this film and would recommend it. However I would recommend that anyone who sees it, reads Pierrepoint's autobiography, "Executioner: Pierrepoint" either before or after the film to get the true story.
6 people found this helpful

rtrndleReviewed in the United States on July 5, 2021
1.0 out of 5 stars
Will not play on my DVD Player
Verified purchase
When I tried to play this DVD, I received a message saying it wouldn't play due to the region code setting of the player.
I live in the United States. This DVD was shipped from Great Britain and I've heard that, due to region codes, DVDs from Europe will not play on American DVD players.

ThebreakerReviewed in the United States on March 29, 2019
5.0 out of 5 stars
Mr. Pierrpoints profession
Verified purchase
An excellent movie ( in my humble opinion), with Timothy Spall portraying Mister Albert Pierrepoint and his chosen macabre profession; that being the ( last) official executioner in the UK , He was brilliant and played a quite believable role, the props were, as far as I am aware quite realistic .
2 people found this helpful

Charlotte D. StewartReviewed in the United States on September 17, 2020
1.0 out of 5 stars
It doesn't work
Verified purchase
This video will not play in this region, so it's useless. I'm certainly not flying to Europe to watch it. Both the VCR and computer brought up this message. I'm sending it back.
One person found this helpful

GroovHoovReviewed in the United States on November 10, 2018
5.0 out of 5 stars
Thought provoking flick.
Verified purchase
Strengthened my view that capitol punishment should be doled out only to those who are so dangerous to a society that they can't be kept locked up (Ted Bundy). Other than that, any individual has redemptive value.
One person found this helpful

Carol M.Reviewed in the United States on October 28, 2021
4.0 out of 5 stars
Grim Subject Matter
Verified purchase
Based loosely on the real Albert Pierrepoint, this movie provides good acting and score.

As with most dramas recently, it gets soppy towards the end.

Allen AslingerReviewed in the United States on October 30, 2020
5.0 out of 5 stars
Great Product
Verified purchase
This is a great film. The product was delivered fairly quickly, considering it came from across the pond. Well worth it.
One person found this helpful

P. HardyReviewed in the United States on July 23, 2018
1.0 out of 5 stars
Seller refunded money for defective DVD
Verified purchase
DVD would NOT play - seller refunded money.
2 people found this helpful
See all reviews
Back to top
Get to Know Us
Make Money with Us
Amazon Payment Products
Let Us Help You
EnglishChoose a language for shopping. United StatesChoose a country/region for shopping.
© 1996-2021, Amazon.com, Inc. or its affiliates