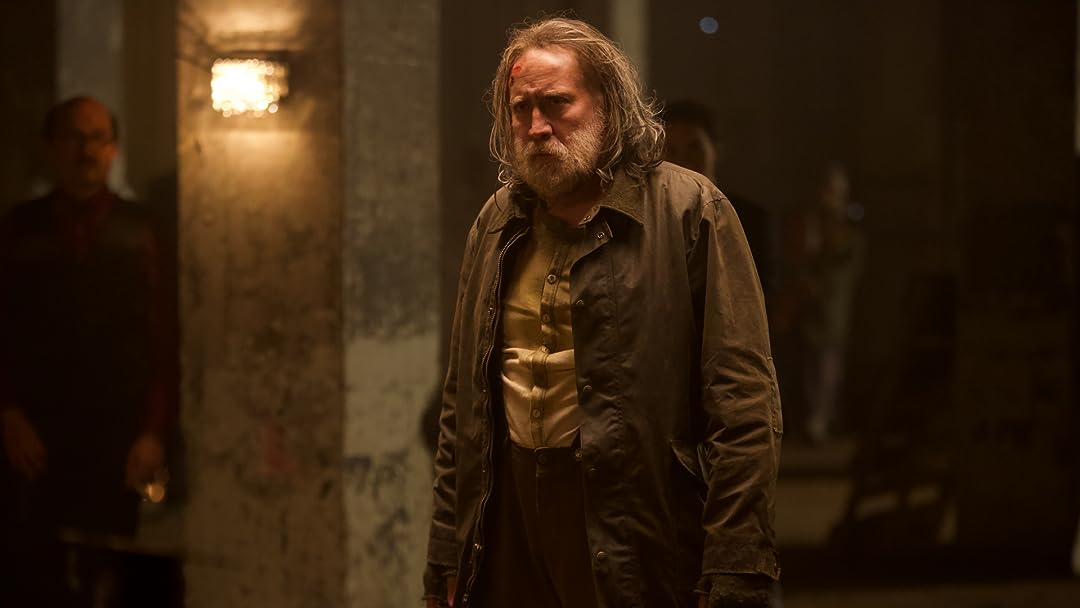 (4,009)6.91 h 31 min2021X-RayR
A truffle hunter who lives alone in the Oregonian wilderness must return to his past in Portland in search of his beloved foraging pig after she is kidnapped.

GhostWriterReviewed in the United States on August 3, 2021
5.0 out of 5 stars
Not what you're expecting
Verified purchase
This is a lovely film. A wonderful performance by Nicholas Cage. Don't go into it expecting John Wick with a pig, it's a somber drama about dealing with loss. Beautifully shot and acted with an excellent score.
46 people found this helpful

SmileCoReviewed in the United States on August 4, 2021
5.0 out of 5 stars
Subtle and Powerful Exploration of What is Real (and the search for a pig)
Verified purchase
Incredible acting, beautifully shot with a powerful score. Nic Cage uncharacteristically subtle with a powerful presence. The irony is part of what brings its power - the love of his pet pig is more real than the love powerful men have for their empty empires, status, and wealth. The entire cast was brilliant, but Alex Wolff shone as an ambitious glory-hunter, acting as a foil to Cage's wise deconstruction of success. Five stars.
38 people found this helpful

Sam BellReviewed in the United States on August 4, 2021
5.0 out of 5 stars
Less is more with Nick Cage's performance.
Verified purchase
There is a quiet beauty to Pig. There is also an undercurrent of tension that Nicholas Cage rides in this melancholy tale. I loved this film and it was awesome to see Cage deliver a performance that truly is the heart of the story and the pain of the journey. Just my opinion.
32 people found this helpful

0 0Reviewed in the United States on August 4, 2021
5.0 out of 5 stars
Precious
Verified purchase
To me this movie is significant, because it is about the best friendship that there can be. A human and their animal. I had to make some choices in life where I have acquired a doggy who in turn had literally saved my life, who is my fury angel and is the love of my life. Thank you.
27 people found this helpful

E.GrayReviewed in the United States on August 10, 2021
2.0 out of 5 stars
Reviews are deceiving
Verified purchase
This is just another critical darling with no depth, shallow story, and boredom. The only thing good about it is Cage even though he doesn't really say much. Such a maudlin piece of work and I swear critics must be paid to rave so much about it.

I was thoroughly disappointed and was left wondering how in the world such a movie could be praised so highly. Just like the depressing Minari and the glacially paced and terrible Green Knight, I'll add this to another reason NOT to believe critics.

JohnReviewed in the United States on August 9, 2021
3.0 out of 5 stars
Good, but unexpected in a bad way
Verified purchase
This film sets itself up to be a John Wick style movie. Pig is captured, violently, and loner woodsman is off to rescue it. That just screams action movie. He has no problem threatening people. We even find out he can take a lot of hits, lending to this idea that he'll be fighting. All this ends in a battle of emotions. He encounters people from his past who he defeats with words. I get the symbolism and value, but I don't appreciate the bait and switch mentality. It's basically violence blue balls. You have to set an intention when you watch a movie. You don't go into Schindler's List telling your friends, or thinking to yourself, this is going to be HILARIOUS. Messing with the intentions of the viewer is a bit disrespectful of our experience. So, I tell you: Go into this movie expecting to see the non-violent version of John Wick and you won't share that disappointment.

As for Cage, I am a hardcore fan of all his works, especially his new era of work. He's really come into this niche in cinema that you cannot find anywhere else. However, I found this character to be yet another brooding, mostly silent, Cage character he's done multiple times now. He did it with Mandy, Willy's Wonderland, and Color out of Space. I'm eager to see him do a new character. I had read this was some of his best work, but honestly, the only truly powerful moments were when he spoke with the chef he fired and the very last scene of the movie. Everything else was pretty par-for-the-course-broody-Cage acting.

Will still watching anything new he comes out with, but hopefully he can switch it up with some different genres and characters, soon, before the trope becomes tired.

Roland O. McgregorReviewed in the United States on August 4, 2021
5.0 out of 5 stars
Amazing story that builds and Builds
Verified purchase
Nick, at his best, sure fire Oscar nominations, all around, buy it, do not rent it, support of this masterpiece is essential
21 people found this helpful

Julio CasteloReviewed in the United States on August 3, 2021
5.0 out of 5 stars
Where's his pig?
Verified purchase
hey watch this if you want to see Nicholas Cage do some great acting.
21 people found this helpful
See all reviews
Back to top
Get to Know Us
Make Money with Us
Amazon Payment Products
Let Us Help You
EnglishChoose a language for shopping. United StatesChoose a country/region for shopping.
© 1996-2021, Amazon.com, Inc. or its affiliates