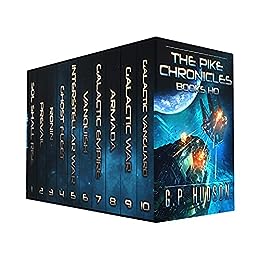 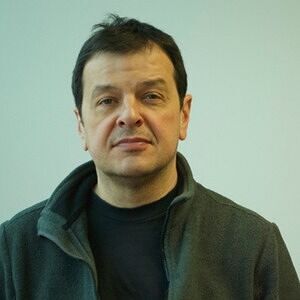 by G.P. Hudson (Author) Format: Kindle Edition
See all formats and editions
Sorry, there was a problem loading this page. Try again.

The 1st 10 hit space operas from The Pike Chronicles:

The Sol System was conquered and humans lived as slaves for 500 long years.

Now, after years of brutal warfare, humanity has been liberated. Liberation, however, comes at a cost, and the Sol System has become nothing more than a puppet state for a vast galactic empire.

For Jon Pike, a war hero who has lost everything, there is no substitute for freedom. He blames the aliens for humanity’s troubles, especially the one living inside him.

But when he is sent on a top secret mission into unexplored regions of the galaxy he discovers that humanity’s troubles are just getting started.

Can he find freedom for himself and humanity?

What Readers are saying about The Pike Chronicles:

"One of the KINGS of space operas"

"I'm a raving fan of this series"

"Space Opera at its Best"

"The Most Creative Action Sci-Fi EVER!"

"A thrill a minute"

"Among the top Sci Fi book series I have ever read and I have been reading Sci Fi for over 50 years. G.P.Hudson is a great action writer with superior plots that flow quickly yet with plenty of meat to bite into."

"If you are a space opera fan, this has to be on a your MUST read list. Terrific story, characters , and writing. I'm always sad when I finish them and have to wait for the next."

"Set aside some time as this is a series that is hard to put down."
Read more
Previous page
Next page

G.P. Hudson has been writing stories since childhood, and is a lifelong reader of science fiction. His study of history provides limitless inspiration for his stories.

4.5 out of 5 stars
4.5 out of 5
149 global ratings
How are ratings calculated?
To calculate the overall star rating and percentage breakdown by star, we don’t use a simple average. Instead, our system considers things like how recent a review is and if the reviewer bought the item on Amazon. It also analyzes reviews to verify trustworthiness.
Top reviews

Suzanne Ferris
5.0 out of 5 stars Easy to read and fun
Reviewed in the United States on November 13, 2021
Verified Purchase
I haven't read sci fi in a while. Boy did I miss it. I wasn't sure I would enjoy this series but I am about 3 books in and I love it. Its an easy read which is nice since I read to relax before bed. I do analysis during the day to this is a nice break. I care about the characters and fortunately, even though most authors will do something that changes what you like about a character (or they become something else). This author so far hasn't done that. The story is interesting and I find that sometimes I can't wait to continue reading it because I want to see what happens. I like it. Maybe you will too.
Read more
Helpful
Report abuse

Michael R. Slezak
5.0 out of 5 stars Non-stop adventure that delivers at the end and keeps you wanting more!
Reviewed in the United States on September 12, 2021
Verified Purchase
This was a fantastic series that took you to a far away galaxy on a tremendous adventure in the distant future.
Hudson does an excellent job creating aliens and mixing them with humans in this dynamic series!
I proudly award this series 5 Stars!
Read more
2 people found this helpful
Helpful
Report abuse

Jerry Connellysr
5.0 out of 5 stars Like chronicles
Reviewed in the United States on August 29, 2021
Verified Purchase
Great story there is a lot of action and adventure I like the characters,all came together,for space battles,I recommend this
Read more
2 people found this helpful
Helpful
Report abuse

Wraptor
4.0 out of 5 stars Good series
Reviewed in the United States on September 23, 2021
Verified Purchase
I enjoyed this series. Near the end the story began to become predictable. It was then that I began to lose interest.
Read more
One person found this helpful
Helpful
Report abuse

Weteddie
4.0 out of 5 stars Following the path of a vision.
Reviewed in the United States on September 5, 2021
Verified Purchase
If you like seeing an under dog achieve goals he didn't know we're possible, this collection of ten novels are worth reading. There is plenty of action both in space and planet side as the chronicles unfold.
Read more
One person found this helpful
Helpful
Report abuse

Gene Burns
5.0 out of 5 stars Space Opera at its best!
Reviewed in the United States on October 7, 2021
Verified Purchase
Through all 10 books, the story continues to draw you in, making you want to just keep reading! I look forward to reading more!
Read more
One person found this helpful
Helpful
Report abuse

Dell Neilson
5.0 out of 5 stars All Ten books
Reviewed in the United States on August 24, 2021
Verified Purchase
I buy a lot of series for .99 I got all ten books this series was a very good all ten books.
Read more
3 people found this helpful
Helpful
Report abuse

Tarra
1.0 out of 5 stars Hot Mess
Reviewed in the United States on July 21, 2021
Tried to do this one. Started off promising but just became so ridiculous and scattered in the first book, I just gave up. Too many sub plots not fleshed out, absurd chain of events that even the most basic tactician or strategist would never do. Look elsewhere for more realistic action.
Read more
9 people found this helpful
Helpful
Report abuse
See all reviews

Geoff W
4.0 out of 5 stars It is what it says on the box
Reviewed in the United Kingdom on August 20, 2021
Verified Purchase
Great stuff .great read and promises more to come G P Hudson take a bow it couldn't be better !
Read more
Report abuse

Amazon Customer
5.0 out of 5 stars Great reading
Reviewed in Australia on October 15, 2021
Verified Purchase
The writing in the first book is only so so but imroves significantly from there on. I read all 10 books back to back!
Read more
Report abuse

Alan Ritchie
5.0 out of 5 stars Brilliant
Reviewed in Australia on August 26, 2021
Verified Purchase
Simply brilliant space opera. Want the next one. Need the next one.
Read more
Report abuse
See all reviews