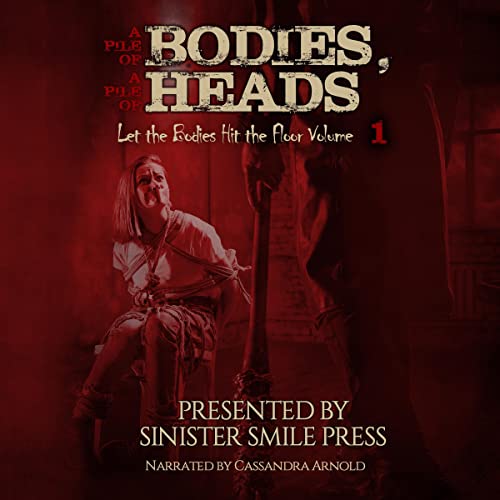 A Pile of Bodies, a Pile of Heads: Let the Bodies Hit the Floor, Book 1

The blade slashes then plunges deep into trembling flesh…then the bodies hit the floor.

They stalk their prey from deep in the menacing shadows, poised and ready to strike at the penultimate moment. Their victims unexpectant, unaware, until they wake in dark rooms, dank basements, or on chilly floors stained with the rotting blood of other hapless victims. The stench fills their nostrils and permeates their pores, the bile rising up in their burning throats. They scream and try to escape, but all attempts are futile. Fear dances like spiders down their spines as they hear ominous footsteps approaching - their eyes spread wide in horror as they realize the end is near.

Let the Bodies Hit the Floor is the latest series from Sinister Smile Press, the creators of The Better Off Dead series. These volumes bring you the very best in horror/slasher/stalker/serial killer crime fiction. The more vicious and bloodier, the better. So, put on your pee-pee pants, because you’re in for one hell of a dark, sinister journey.

In Honor of Books
4.0 out of 5 stars Don't Trip
Reviewed in the United States on September 28, 2021
Verified Purchase
Oh man, happy fall, over the bodies and the heads! I loved this anthology of horror stories. My favorite was Checkmate. Excellent plotting, backstory and pacing, I enjoyed it the most. Each story was great, this was just my favorite. Enjoy!
Read more
3 people found this helpful
Helpful
Report abuse

Have to sleep w/the friggin light on!

You all scared me silly!

Terrifying. Crazy. Infused with more energy than 10 cups of coffee. The stories are a must-read for any fan of horror.

The stories were compelling as anything. I cannot help but think any horror reader would be absolutely riveted -- electrified -- by this collection.

I went into it with caution. I wasn't sure how I'd feel. But I was hooked by the second page of the first story. Amazing.

I have become more and more awed by the power of anthologies and story collections. I love seeing each and every writer's unique style. This collection was no different in that regard.

I loved ALL the stories but two I must single out.

One is from a GR friend of mine -- Bridget. Bridget, I so love your works. The interesting thing about you is that you seem to always write about what I love. I remember in one book, you had a horror story about a Politician -- I am a political junkie so that was the perfect fit for me.

And now you have an innocent trip to the beach that turns into --well -- I will not say because people need to read it!

I am a huge fan of the sea (just look at my user name!!) So this was perfect for me as well. And I could visualize everything so well. I will never look at a beach vacation in the same way again! Part two perhaps?

The other story I must single out is:

Ali -- I don't know what to say. Your writing left me speechless. This is a story that will not leave me for months -- if at all. I was so reminded of "The Lottery" and "The Purge" and other stories. It was quite an experience reading this. A film version I could so easily see. As with Bridget's story, I say to you -- part two perhaps?

So, to sum up -- an engaging bloody good time! (Literally bloody!) This was a great collection and one that I'd recommend to horror fans everywhere.
Read more
Helpful
Report abuse
See all reviews

sarah jane huntington
5.0 out of 5 stars Amazing anthology
Reviewed in the United Kingdom on September 12, 2021
Verified Purchase
Wow
These stories are amazing and so chilling. Genuine scares and fright from the very first story. Dark and disturbing and each tale really gets under your skin. Extremely impressive collection
Read more
Report abuse
See all reviews
Back to top
Get to Know Us
Make Money with Us
Amazon Payment Products
Let Us Help You
EnglishChoose a language for shopping. United StatesChoose a country/region for shopping.
© 1996-2021, Amazon.com, Inc. or its affiliates