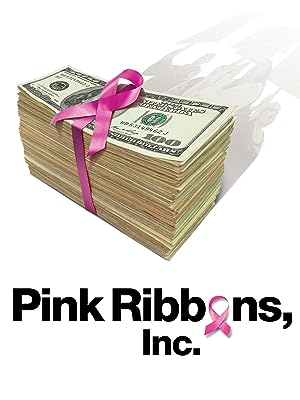 (84)
7.31 h 37 min2012ALL
The ubiquitous pink ribbons of breast cancer philanthropy - and the hand-in-hand marketing of brands and products associated with that philanthropy -- permeates our culture. But who really benefits from the pink ribbon campaigns -- the cause or the company?

doogiesmomReviewed in the United States on October 10, 2020
4.0 out of 5 stars
Informative doc...
Verified purchase
Honestly I never paid much attention to the whole "pink ribbon" Komen, Avon, Revlon cure events. Mostly likely due to that I already knew when companies get involved with charities there is 99% of the time something in it for them. I wonder how much the companies at the Komen races had to pay (donate lol) to be there. It was amazing to see the level of sugar laden, unhealthy products offered left and right. Not to mention KFC and makeup brands laced with carcinogens that are tested on animals. Most people are cognitively dissonant. So they cancel out the things that are in conflict with the good feelings they think they deserve all the time. And most people have a real fear of death. Hence all the "pink" and the hyper rah rah extroverts all coming together for a big party so they don't have to deal with what is really happening. What was fascinating to me was to witness the amount of obesity among the women participating in these events. Do their doctors actually tell them that obesity could be a factor for cancer? My mind boggles. But drug companies have no interested in prevention or finding cure. They are interested in people using their drugs - hopefully for the rest of the time the person is alive. That's why there are so many fat people. Because diabetes is big business. It's all a game to these companies. Again mind boggled....

BA Jordan-ParkinsReviewed in the United States on April 1, 2014
5.0 out of 5 stars
Finally, a view that does not depict breast cancer as a pink party and a feminine rite of passage
Verified purchase
Very well made documentary about profiteering on the suffering of breast cancer patients that occurs right under our noses.

I was very excited about this film's release, as I was diagnosed with very aggressive Triple Negative Breast Cancer in 2011 at age 34, along with a deleterious BRCA1 mutation which I also passed to my daughter and which forced her to undergo a bilateral mastectomy with reconstruction at age 20 in order to mitigate her risk. As a result of my diagnosis, my eyes have been opened to the dirty pink underbelly of this cause marketing darling, and I have endured more than my fair share of pink fatigue, as well as the emotionally draining rah-rah glamorization of the disease. No other deadly illness comes with inundations of the “just stay positive” nonsense and offensive sexualization such as “ta-ta’s” and “second base.” Not to mention the war/military metaphors attached to cancer and specifically breast cancer such as “battling” which inadvertently implies that those who die didn’t fight hard enough, though of course, people don’t realize this (and surely don’t mean its inverse implication) when they’re just trying to be supportive of a loved one who is facing this disease.

When I was undergoing chemotherapy, it was not unusual to see people dressed in pink feather boas, bright pink tutus, or bedazzled bras worn over their shirts in the infusion area of the cancer hospital. No other form of cancer is glamorized in this way. By contrast, brain tumors and pancreatic cancer don’t have these cutesy or sexualized tropes attached to them.

This documentary dares to expose the other side of the coin to show that those of us diagnosed with metastatic disease are offended and hurt at the “survivor” mantra and party-like atmosphere as well as excluded from depictions of the disease because metastatic patients will ultimately have their lives taken by this insidious disease. It is often told to metastatic patients that their presence at breast cancer events will frighten, scare, or cause lower stage patients to feel “less positive” and as a result, those dying of the disease or those with a terminal diagnosis are excluded or told not to attend events. It also shows that companies who claim to raise money for “awareness” (seriously, we are all aware...though not correctly because there is so much misinformation about such a common disease) are some of the same companies that use carcinogens in their products.

This film does a very good job of showing what many breast cancer patients feel is a glamorization of their suffering and the creation of a cause marketing darling...without any real benefit to those who are diagnosed (the death rate in the US has remained around the 40,000 per year mark despite billions thrown at the disease).

Those featured in the film are the late Barbara Brenner of Breast Cancer Action, breast surgeon Dr. Susan Love, Nancy Brinker (sister of Susan G. Komen), and many others. Highly recommend.

Sommanie BuxReviewed in the United States on April 10, 2016
4.0 out of 5 stars
Pink is only a color
Verified purchase
When my beloved friend was dying from ovarian cancer, the Susan G. Komen breast cancer organization phoned us at least twice a week, soliciting donations. One caller actually suggested a "legacy": read "a bequest". Needless to say, they aren't going to see anything from me.
Anyone who is considering pouring any kind of money into these organizations seriously needs to not only watch this film, but pay close and careful attention to the things that are not said.
A well-written, well-produced film, which should be watched, mulled over, and discussed.
11 people found this helpful

SaguaroGeorgeReviewed in the United States on May 10, 2019
4.0 out of 5 stars
Definitely worth watching, though overlong
Verified purchase
Informative about a very important subject, but very repetitive. A half hour would have been ample to get across the central messages of the film. When you've seen ten races for the cure, you've seen them all. I would also have liked to see more of Susan Love and Barbara Ehrenreich, both of those books I have read to my great advantage. Nevertheless, there's a lot of important information well presented, and everybody speaks with admirable clarity.
2 people found this helpful

Misty Blue &#34;Tarra&#34;Reviewed in the United States on May 21, 2016
4.0 out of 5 stars
Pink Ribbons
Verified purchase
Great insight as to how wasted funds are that women give with their hard earned money, feeling there is hope to cure breast cancer, with only 15 cents of every dollar goes to research and only 5 cents goes to environmental research. I feel that women/people should be looking at our food system/herbicides/pesticides, and having meetings /conventions regarding how to heal your body naturally. This video blows open the doors showing how they use ways to make women feel connected to a cause that there has been no progress in getting any closer to curing cancer. Cancer is a business and these fund drives are another business giving women false hope.
4 people found this helpful

SJ Joon ThomasReviewed in the United States on November 21, 2015
5.0 out of 5 stars
Excellent Documentary
Verified purchase
This well-made, focused documentary examines the breast cancer-awareness juggernaut. Like many disease-awareness campaigns, the pink ribbon crusade has brought out millions of people, raised billions of dollars and yet brought us no closer to the "cure" that is being sought. The documentary discusses the corporate contradictions (companies that produce cancer-causing products/by-products and support cancer research), the focus on "cure" without researching the causes of disease, and the psychology of battling a disease and the concept of survivors (are those who die failures because they did not try hard enough?). Plenty of food for thought and an engaging, interesting film.
7 people found this helpful

Laura A. FoncellinoReviewed in the United States on September 4, 2020
5.0 out of 5 stars
Many voices speak
Verified purchase
I found this to be a really well-done documentary that included a lot of varying opinions from many different women. There are a lot of voices that need to be heard - not just the ones being marketing by corporate pink ribbon.
I do understand the movement - as women especially, we want to fix things. Being a part of this movement makes us feel like we are doing something against a disease we feel powerless over. I think we need to keep speaking out for change - let's keep making our voices be heard!

Amazon CustomerReviewed in the United States on November 16, 2015
4.0 out of 5 stars
Want to know where YOUR money goes when you donate it to a charity?
Verified purchase
Tells fairly in depth of where your hard earned money ends up when you donate it to a charity, like most the " Pink Ribbon" charity is no different, just another souless person who figured out how to make a very handsome living off of the misery, pain and sadness of others. That is the subject matter, overall, it's very well read, informative and un-biased as well as easy to follow.
7 people found this helpful
See all reviews
Back to top
Get to Know Us
Make Money with Us
Amazon Payment Products
Let Us Help You
EnglishChoose a language for shopping. United StatesChoose a country/region for shopping.
© 1996-2022, Amazon.com, Inc. or its affiliates