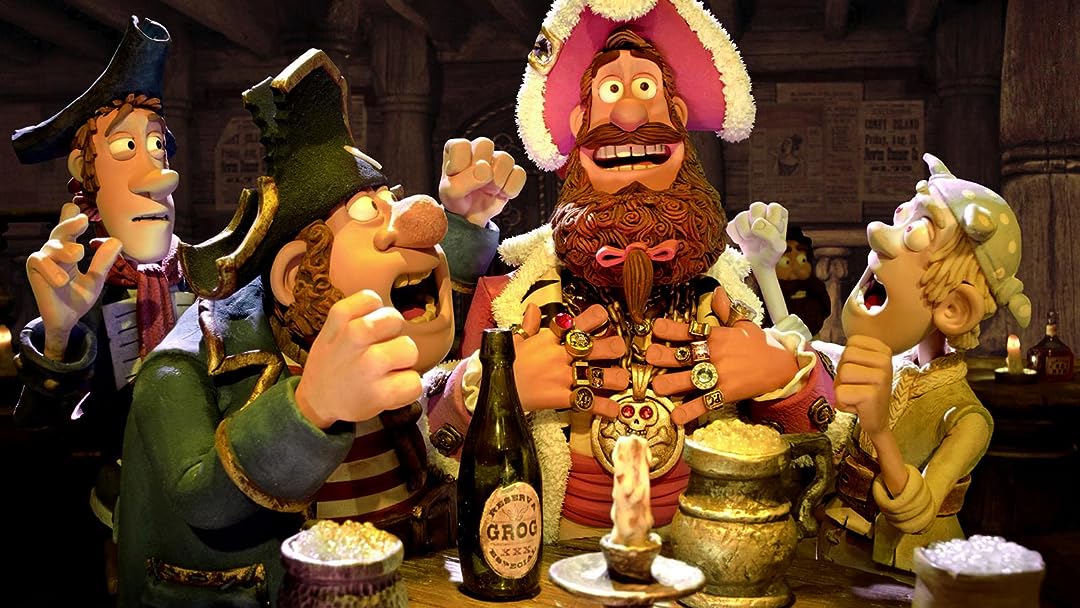 The Pirates! Band Of Misfits

(2,477)
6.71 h 28 min2012X-RayPG
A group of pirates journey to London and meet Charles Darwin, a talking chimp named Mister Bobo and an enemy looking to wipe them out. Based on "The Pirates! (In an Adventure With Scientists)," the best-selling books by Gideon Defoe.

elizabeth nolanReviewed in the United States on November 2, 2016
5.0 out of 5 stars
I love Aardman Animation
Verified purchase
I love Aardman Animation. Let me start off by saying that. Aardman Animation relies on smart jokes, witty humor, and jokes that don't make you feel like closing your eyes and plugging your ears. They don't rely on fart jokes, popular slang, or current pop culture references and that's what I think makes them so great. I was worried I'd be bored during this movie but I ended up loving it. The pirate captain wants to be pirate of the year more than anything. Charles Darwin wants to impress the queen more than anything. The pirate captain tries everything, and I mean everything to be a better pirate (love the ghost ship joke) but nothing works. He teams up with Darwin in an attempt to win the award, but it comes at a very high price. Will the pirate captain pay it? What I love about this film, is it kept me laughing the entire time and my attention along with it. It's a movie boys will love and one parents can enjoy too. It's got a great underlying theme and not a movie that would make you feel a little stupider after you watch it. With some great voice casting choices and a decent mini movie, this movie is quite the treasure (pun intended this time!)
25 people found this helpful

donkeyReviewed in the United States on March 18, 2018
3.0 out of 5 stars
Earlier Aardman Films are Better Than This
Verified purchase
Wallace and Gromit easily entertain all ages-- Shaun the Sheep episodes delight. I'm a fan of Creature Comforts and I love Chicken Run too. How could the Pirates be such a let down? The trailers for the film show enticing, slap-stick and funny scenes. Those are all the great scenes. There's 2-3 minutes of visual humor in the movie. My kids and I gathered round to watch the film, filled with anticipation; halfway through the movie, the kids wandered off. The gist of the plot line isn't easily swallowed, and I think that's the reason the film falls flat. The idea is that this Pirate Captain must win an award to prove to all the other pirates that he's Important. Why? Why should pirates care about how they are perceived? Misfits under the Pirate Captain all seem perfectly content with themselves; why is the leader insecure? The theme isn't bullying. It's puzzling. Interacting with characters like Queen Victoria and Charles Darwin didn't add much to the story either. I think this is why the movie didn't work.

The claymation is still amazing. The voice actors are top notch! I caught myself thinking about computer graphics way too often during the film instead of marveling at the skill of the animators, painters, and set-makers.

Mark K. RempelReviewed in the United States on April 30, 2017
4.0 out of 5 stars
Funniest Pirate Movie Since Cutthroat Island
Verified purchase
This movie includes a 18-minute min-movie, " so You Want to Be a Pirate," which is funnier than the main feature. Both were in Claymation, with Aardman's usual lunatic humor. The film was funny but it had it's slow parts. Most disappointed that Cutlass Liz (Salma Hayek) had only the tiniest bit cameos and was not a major character. Best parts were when Queen Victoria (Imelda Staunton) was revealed to be a psychotic action character, battling Pirate Captain (Hugh Grant). Pirate Captain wasn't much of a pirate, but more of a comedian. It is a very funny animated feature, but not always. I knew some people loved it, and I did laugh at some of the parts; however, it could have been funnier. Odd that Pirate Captain doesn't sound like Hugh Grant, though it is him. One question: how many floors does Charles Darwin's house have? The characters seem to fall down countless stairs and the gag went on too long. There needs to be more lady pirates. I did notice a lady pirate with a long orange beard and nobody seemed to notice it was a woman. Recommended for anyone who wants to see pirates made fun of.
2 people found this helpful

Steve LReviewed in the United States on September 9, 2012
5.0 out of 5 stars
Had to watch it multiple times - such a delight!
Verified purchase
My wife and I saw The Pirates! Band of Misfits in the theater while most everyone else was watching the Avengers film. We absolutely loved it, as we have nearly all Aardman work, but realized that there were so many jokes crammed in around the corners that we knew we had to get it on disc to watch at home, where we could pause, rewind and read the backgrounds.

The Blu-Ray disc is fine quality with excellent picture and sound. A huge number of (thankfully skippable) previews up front took some time to jump over. There's a "So You Want To Be a Pirate" short which, while fun, is not quite up to the level of the main film. There's also a couple of "making of" documentaries that I have not watched yet.

We had finished viewing the movie when my wife asked that we go through the credits slowly, as she thought the actor who voiced "Number Two" (aka "The Pirate with the Scarf") sounded a lot like the John Watson character on the PBS "Sherlock" series (which we had just watched an episode of before.) Sure enough - both were Martin Freeman.

One of the many things I like about The Pirates! and other Aardman films is that they are enjoyable on so many levels. Kids will laugh and be thrilled, and adults will laugh at jokes and situations the kids might miss. (For example, "The Surprisingly Curvaceous Pirate", who is a minor character but good for a couple of jokes along he way.)

This packaging includes Blu-Ray and DVD discs and also a code for UltraViolet, allowing some limited online streaming of the movie. The process for signing up for this was not only cumbersome, but the UltraViolet web site was dead for several days. Doesn't bode well.... While we saw the movie in 3D in the theater, I don't see that it really benefits from the 3D treatment at home. Curiously, if you do buy the 3D version, you don't get UltraViolet!

AbookanightReviewed in the United States on October 21, 2012
4.0 out of 5 stars
Good Clean Fun
Verified purchase
Pirate Captain wants to win the Pirate of the Year award. The problem is, although he is followed by a very loyal, if somewhat misfit crew, he's just not a very good pirate. The reasons why his crew loves him becomes obvious as his kind heart and general over looking of everyone's faults, including his own, makes him a fun guy to be around. Until he meets Darwin who informs him his "parrot" is not a parrot. Envisioning awards of gold that will get him to the top in the pirate competition, Pirate Captain sets his sights on winning the scientist of the year award. Unfortunatel, the queen envies his "parrot" and soon Pirate Captain is faced with a difficult decision that separates him from his crew and the parrot. Then he has to redeem himself and save the parrot, while being saved himself.

The story line is a wonderful lesson for kids and adults alike with lots of good, clean fun along the way. There's lots for everyone to laugh at, but it avoids the potty humor so many movies feel like they need to stoop to.

I really enjoyed watching this movie with my girls.
2 people found this helpful

Brooklyn PetersonReviewed in the United States on September 27, 2020
5.0 out of 5 stars
Listen close or you might miss the best lines!
Verified purchase
This is one of those movies that is full of British humor. If you’re not paying attention you’ll miss some of the funniest jokes. It’s kind of one of those shows that if you don’t get intelligent jokes you probably won’t find it very funny, but it’s me and my dad’s favorite. we think it’s hilarious and the animation is great and the characters are just funny. Wish the show got more recognition.

Ray A. NesetReviewed in the United States on February 20, 2013
5.0 out of 5 stars
The Pirates will steal your heart
Verified purchase
I remember seeing the advertisement for the movie & thinking that it looked cute. But rarely do I race out anymore to see a film based on the trailer, having been burned too many times. I soon forgot about it & just happened to see it at Christmas time on cable. We landed on it while channel surfing & got sucked in immediately. When there were mere minutes left, the TV shut off inexplicably. I was surprised that I wondered about the ending for weeks afterwards. This odd little film got under my skin. So two months later I finally ordered it on Amazon. I watched it as soon as it came out of the packaging & considered jumping to the ending where the TV had shut off, but opted instead to watch it in its entirety. I was happy to discover that it was just as enjoyable as the first time around. I recommend The Pirates! Band of Misfits for anyone wishing to escape for 88 minutes into a well animated, cleverly written saga of the endearing Pirate Captain & his band of loveable misfits. I suspect there will be a sequel; at least I hope so.

AlyssaReviewed in the United States on February 19, 2013
5.0 out of 5 stars
Aarg in a good way
Verified purchase
This is one of my favorite movies of all time. Months before it was released, I found its production blog and had been excitedly following it. Aardman Animations is an incredible company. The work that was put into it was insane, but I still found myself dreaming of one day working for them. When the commercials came out, I was so excited! Then, I saw it in theaters the week it came out and it was even better than I was hoping! I had to travel many miles to see it, but I didn't care, and I got some friends to go with me and we dressed as pirates. The plot was not at all what one would come to expect from the commercials--it was even better. It had many hilarious moments (Brit humor is the best!!!!) and many heartwarming moments as well. It was done beautifully. The voice actors did a great job and of course the animation was unbelievable. When this movie finally came out on DVD I ordered it and gave it to my dad for Christmas. This is not a man who always appreciates children's movies, but even he adored this movie. It has something in it for everyone.
See all reviews
Back to top
Get to Know Us
Make Money with Us
Amazon Payment Products
Let Us Help You
EnglishChoose a language for shopping. United StatesChoose a country/region for shopping.
© 1996-2022, Amazon.com, Inc. or its affiliates