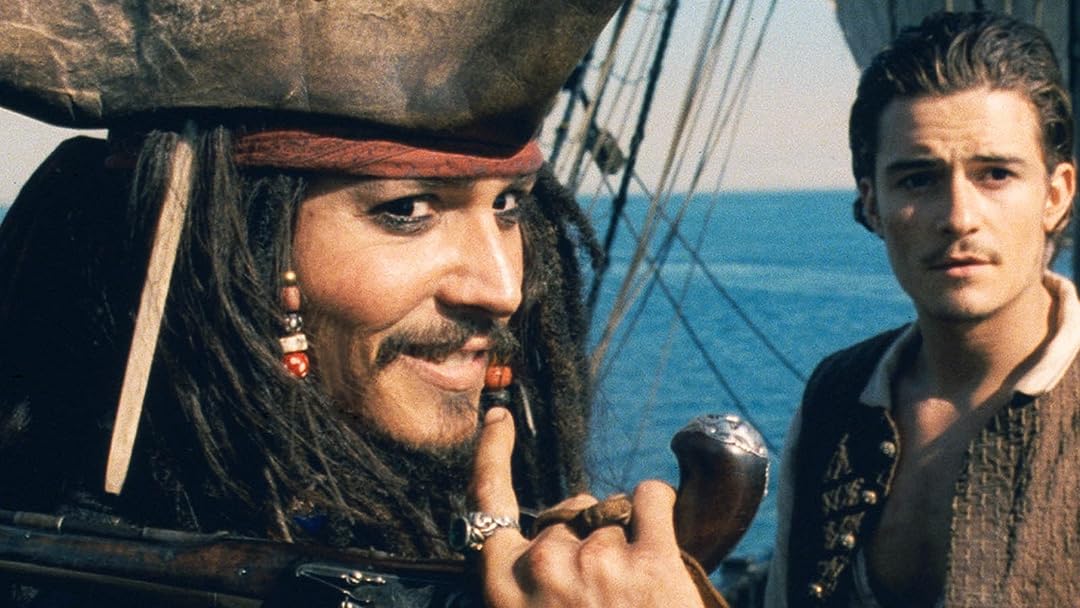 Pirates of the Caribbean: The Curse of the Black Pearl

(14,825)
8.12 h 23 min2003X-RayHDRUHDPG-13
Join the adventures of Jack Sparrow and his nemesis Captain Barbossa on a thrilling, high-seas adventure with a mysterious twist!

RDDReviewed in the United States on February 14, 2018
5.0 out of 5 stars
The First and Still the Best
Verified purchase
The "Pirates of the Caribbean" series has become so large and epic that it's easy to forget how relatively self-contained this first film was. Introducing Captain Jack Sparrow, Elizabeth Swan, Will Turner, and Hector Barbossa, the film focuses on cursed Aztec Gold and introduces many of the versions of piracy that dominated the latter movies. Mystical elements aside, the film is relatively character-driven, with the interactions between the main characters and side characters driving the action, the drama, and the humor. Even better, unlike the later bloated blockbusters, this film used CGI only when necessary and feels more grounded due to the limitations that placed on the story. Each successive "Pirates" film feels like an attempt to recapture the pure joy of this adventure story. Do yourself a favor and take a trip back to 2003 when Johnny Depp's portrayal of Jack Sparrow was odd, but confident, and Kiera Knightly and Orlando Bloom were up-and-coming stars. Enjoy Geoffrey Rush when he was a fun part of an ensemble cast and didn't have to carry an overdone, bloated blockbuster. The first remains the best and it's only with "Dead Men Tell No Tales" that the series has achieved a sense of resolution.
31 people found this helpful

ScottReviewed in the United States on September 14, 2021
4.0 out of 5 stars
Jack Sparrow is NOT a good man.
Verified purchase
But neither is he entirely bad. That's the theme for several characters that make this show interesting. What do you make of someone who's very self serving, a thief and pirate, but also heroic when the situation calls?

Mostly I think Depp is pretty mediocre, but occasionally he knocks one out of the park, and this is it. I like to think he had fun with this character (don't correct me if I'm wrong); I certainly find it fun watching. He carries much of this movie.

The action and special effects are overall good if not always consistent. The moonlight effects are strange but fun. I'll definitely watch again.

RLReviewed in the United States on February 3, 2019
3.0 out of 5 stars
No DTS HD Master!
Verified purchase
Not sure this is a bootleg or not. Bought the first three movies on Blu-ray for the higher definition audio not available with the DVD version. DTS HD Master is my preferred codec, and the packaging has it. However, the highest audio is an uncompressed 5.1 Dolby digital track. The picture is higher rez too but appears "cooler" than the earlier DVDs. I will keep them because they were all less than $10, but be aware these don't have the stated audio. Maybe I got a different region than US. Disappointed.
7 people found this helpful

A ReaderReviewed in the United States on May 7, 2022
5.0 out of 5 stars
Johnny Depp is a Creative Genius
Verified purchase
I’ve loved everything I’ve seen Johnny Depp in. But I had never seen The Pirates of the Caribbean series. Wow! The story, the acting, the costumes, the special effects—and Mr. Depp in one of his most creative, engaging and powerful performances. I can’t wait to watch the rest of the series!
4 people found this helpful

ForeverYOUNGReviewed in the United States on July 25, 2021
5.0 out of 5 stars
Curse of the black pearl
Verified purchase
My 8 year old grandson is VERY into pirate movies and is just now getting to see the pirates of the Caribbean stories. He loves them all. I don't buy DVD's anymore - so much easier to stream from anywhere and I don't have to store the DVD. In any case, in my opinion it is worth owning the whole list of the Pirates of the Caribbean for the special effects alone, not to mention the stories and Johnny Depp!
2 people found this helpful

B. CarlisleReviewed in the United States on March 30, 2016
5.0 out of 5 stars
Fabulous movie, but very violent and some scary scenes
Verified purchase
Super fun movie, but not for little kids. There are several very violent scenes where the pirates invade a town and people (both pirates and townsfolk) are killed by stabbing, shooting, etc. There is a brief scene of a very young child lost, scared, and crying for his mother, which would likely be disturbing to children. The pirates take the form of rotting skeletons in many scenes throughout the movie and look pretty gruesome. A wonderful movie, great acting, but make sure your kids are ready for the violence. I watched it in the theater when it came out and had forgotten how violent and scary some of the scenes are... I just let my 4th-grade daughter watch it -- she did okay and overall she enjoyed the movie, but some of the scenes were intense for her. Probably should have waited a couple more years to let her see it....
26 people found this helpful

MeaganReviewed in the United States on May 31, 2022
5.0 out of 5 stars
Great movie, awful app.
Verified purchase
Incredible movie, but the Amazon quality is bad. Volume constantly changes and the picture is extremely dark. Tried different movies on several devices. The quality is not good. Amazon prices are increasing, but the functionality of the video and music apps keep decreasing. Already cancelled the "music unlimited" due to the inability to function, and this will be my last subscription to prime. Amazon is going downhill. Disappointing.
One person found this helpful

M. HartReviewed in the United States on January 6, 2004
4.0 out of 5 stars
&quot;Pirate or not this man saved my life.&quot;
Verified purchase
In 2003, Walt Disney Pictures (along with First Mate Productions and Jerry Bruckheimer Films) produced what is probably one of the best pirate films of the past two decades. Under the direction of Gore Verbinski (who directed "The Ring" in 2002), "Pirates of the Caribbean: The Curse of the Black Pearl" is a very entertaining and engaging film in large due to the wonderful acting of Johnny Depp, Orlando Bloom (who played "Legolas Greenleaf" in all three "Lord of the Rings" films between 2001 and 2003), Geoffrey Rush and Keira Knightley, as well as superb special effects, good cinematography and good writing. The principle writers for the film, Ted Elliott and Terry Rossio, have previously collaborated their writing skills on such films as "Little Monsters" (1989), "Aladdin" (1992) and the highly successful "Shrek" (2001), to name a few. Two other writers who helped to write this film are Stuart Beattie and Jay Wolpert.
The story, which was probably inspired by a ride of a similar name at the Disneyland amusement park in California, follows the life of a woman, Elizabeth Swann (Keira Knightley), from when she is child (played by Lucinda Dryzek) while she and her father, Governor Weatherby Swann (Jonathan Pryce), are en route to Port Royal. After successfully fending off a pirate attack, a boy named William Turner (Dylan Smith) escapes from the pirate ship and travels to Port Royal with Elizabeth and her father. As a memento of the attack, Elizabeth keeps a gold coin that she finds in Will's clutched hand. As an adult, Will Turner (Orlando Bloom) works as a blacksmith. Enter the enigmatic pirate Jack Sparrow (Johnny Depp), who is not particularly welcome at Port Royal. He is imprisoned by Gov. Swann, but escapes when Port Royal is attacked by the pirate ship named the Black Pearl, which is commanded by Capt. Barbossa (Geoffrey Rush). Jack wants the Black Pearl, Elizabeth is kidnapped and the nature of the curse is revealed.
Memorable scenes in the film include the pirate attack during Elizabeth's childhood, Jack's arrival at Port Royal, Jack meeting Will, the attack upon the port, Elizabeth onboard the Black Pearl, Will and Jack leaving the port, and the scenes at the Isla de Muerta. Other memorable characters include Mr. Gibbs (Kevin McNally), Koehler (Treva Etienne), Norrington (Jack Davenport), Ragetti (Mackenzie Crook), Pintel (Lee Arenberg), Mullroy (Angus Barnett) and Murtogg (Giles New).
At 2 hours & 23 minutes, "Pirates of the Caribbean: The Curse of the Black Pearl" is sure to entertain both adults and children alike. Overall, I rate the film with 4 out of 5 stars. It would not be surprising if the film receives several Oscar nominations, which may include Best Special Effects, Best Art/Set Decoration, Best Costumes and possibly Johnny Depp for Best Actor.