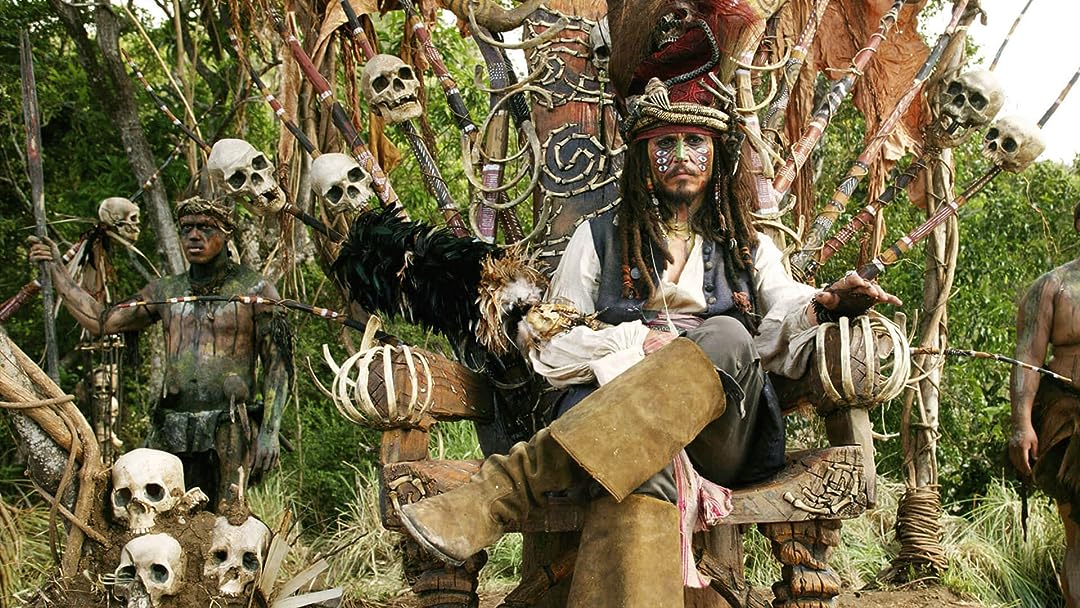 (11,191)
7.32 h 30 min2006X-RayHDRUHDPG-13
Pirate Jack Sparrow must seize the fabled "Dead Man's Chest" in order to cheat death and eternal damnation. But the high seas present many obstacles -- including the mighty Kraken!

Yolanda ScottReviewed in the United States on October 29, 2022
5.0 out of 5 stars
Worth buying it
Verified purchase
I bought this for my husband, one of his favorite movies!

Davy Jones, captain of the Flying Dutchman, sent me to write this review for Pirates of the Caribbean: Dead Man's Chest.

One of the best Pirates of the Caribbean movies of all time, this film is in my book of definitions fits the term Classic. As a sequel to 2003's the Curse of the Black Pearl, this proves itself to be better than the original. More fun, more humor, more action, a super hardcore sea villain, a tribe full of hungry yet stupid cannibals, a disastrous sea monster, and of course what makes every Pirates film entertaining and awesome are Captain Jack Sparrow's (portrayed by the ever stunning actor Johnny Depp) mischievous and hilarious stunts and antics.

The film's plot revolves around Jack Sparrow on a desperate quest to free himself from the grasp of Davy Jones, ruler of the ocean, by seeking out the Dead Man's Chest. At the same time, Will Turner, played by Orlando Bloom, and Elizabeth Swann, played by Keira Knightley, are arrested and facing the death penalty for helping Sparrow escape in the first film and seek their own means of freedom, eventually clashing with Jack and his problems and all goes chaotic for everybody. From the get go, the film begins at a much faster pace than the first one, obviously since by now we've been introduced to the characters and know where they come from. Like all sequels, that part has been taken care of and now we're moving on with what comes next after all ended well in Curse of the Black Pearl.

The film opens with Will and Elizabeth's wedding being interrupted by the East India Trading Company, who's primary interest is seeking out of course Jack Sparrow, which leads to Sparrow's hilarious introduction escaping that coffin (how he got thrown in prison who knows) and rows back to his beloved Black Pearl, where he learns his debt to ocean ruler Davy Jones is due. Desperate he sails off to a mysterious island inhabited by a tribe of freaky looking but stupid hungry cannibals. That entire sequence I believe is probably one of the most popular moments in the entire franchise. All this goes back to how this film begins at a much faster action filled pace than the original.

The effects for the film are incredible for it's time, a huge step up from the first film's, which didn't look bad at all that being said. Davy Jones as a villain is twisted and devilish by nature and his appearance is outstanding as well as the effects for his cursed sea creature crew members. Despite the fact that they are computer generated, the actors do an amazing job delivering a nightmarish performance. Not to mention the Kraken looks so real too. The effects for the sea and the settings look amazing beyond imagination. It makes it look as though they actually filmed the sea sequences out at open sea and it wasn't all blue screen, wouldn't that be amazing. The action is awesome as expected from the cannibal scene to the duel on Isla Cruces, to the scenes with the Kraken which are downright scary. The humor is awesome too, Jack Sparrow spilling out spices in his armpits in front of the cannibals is hysterical or him running from them on the beach lol!

The Pirates of the Caribbean series is sadly a de-valued series that gets a lot of backlash and hate from others who say it's too silly, over the top, repetitive as the series progresses. While it may be true, it's still awesome. Why does everything have to be taken so seriously with America and film? This obviously wouldn't be a film worthy of the Oscars, although I would nominate it for a lot of things, but it is worthy to be called a legendary movie to a legendary franchise. This is the second best Pirates film right after the fourth one, which is my favorite out of all of them.

The delivery was on time and ready for the whole family to view. One awesome thing about the blu-ray menu for this movie is it has a cool sequence with a living, breathing, talking skull that tells you what destiny lays ahead for you as you prepare to watch the film.

This is the end of my review. Until next time, I will soon be reviewing the third Pirates film At World's End, so stay tooned me hearties!

MBReviewed in the United States on August 3, 2022
4.0 out of 5 stars
Interesting way to spend an Evening
Verified purchase
You know why we rented this. We had never heard of the star or the wife but after how many weeks of the trial with Pirates mentioned over and over we tried one. It had many silly spots and plenty of stunt work. I had always liked thee music, having coached students for it in their lessons for band. I wish there would have been more, but you can't have too much while people are trying to kill each other. We enjoyed watching it andd decided we may wait a while to watch another. The funny part was that we had watched the 2nd Downton Abbey movie so Wow, what a switch! Still fun.

Amazon CustomerReviewed in the United States on September 8, 2022
5.0 out of 5 stars
These movies are great!!
Verified purchase
Love Johnny Depp!! Love all of The Pirates of the Caribbean movies! Amazing movie that hits all the bells, funny, scary, great story with astronomical actors!! If you haven’t watched these movies you need to!!

Zachary BelliReviewed in the United States on September 8, 2022
4.0 out of 5 stars
Awesome
Verified purchase
You should definitely watch it

Marcia in DCReviewed in the United States on July 7, 2022
4.0 out of 5 stars
Pirates 5 MAY be the end for JD
Verified purchase
Javier Bardem can’t save this one. Filmed in Australia. Anyone have $300 million and 100 million alpacas?
To say that Pirates 5 requires a sequel is like adding an opera to The Ring.

Demi H.Reviewed in the United States on June 20, 2022
5.0 out of 5 stars
Dead Man’s Lover
Verified purchase
How could you not love this movie? Johnny Depp is the world’s best actor for this role. This movie shows Captain Jack Sparrow, a beloved character for many, sailing the sea to find the Dead Man’s chest. Great comedy while keeping up the action. This one will keep you intrigued. You will find yourself falling in love with all the characters introduced. There’s not a dull moment. Today was almost the day you caught Captain Jack Sparrow!

kathyReviewed in the United States on June 10, 2022
4.0 out of 5 stars
Surprised
Verified purchase
I was surprised when I received it, didn't know it was a used dvd. Haven't watched it yet to give a review but I haven't been disappointed yet
See all reviews
Back to top
Get to Know Us
Make Money with Us
Amazon Payment Products
Let Us Help You
EnglishChoose a language for shopping. United StatesChoose a country/region for shopping.
© 1996-2022, Amazon.com, Inc. or its affiliates