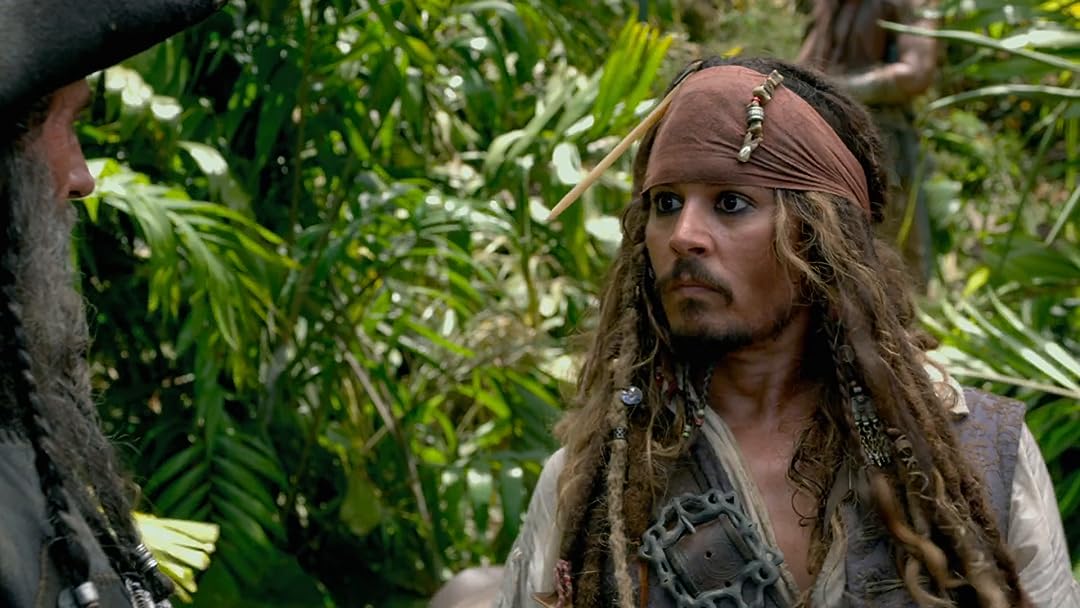 Pirates of the Caribbean: On Stranger Tides

J.A.Reviewed in the United States on May 19, 2017
4.0 out of 5 stars
A return to form for Captain Jack Sparrow
Verified purchase
I really enjoyed the first Pirates film, it was a pirate movie in a time where no one was making pirate films. It had it's flaws but it was an enjoyable ride. I found the second movie to be fine, and I really disliked the third. On Stranger Tides is a return to form in a lot of ways. I don't know if Jack Sparrow should be the main character, as great as Depp is in the role it's a little overkill at times, but this movie goes back to the basics from the first film. It's a smaller, more contained story without all of the heavy handed drama the second and third films wallowed in. It's a silly, fun movie that doesn't take itself too seriously. Sometimes that's just fine.
28 people found this helpful

SiagaoReviewed in the United States on July 18, 2016
4.0 out of 5 stars
Enjoyable
Verified purchase
I wasn't sure I'd want this sequel. The 3rd movie nearly did me in for the entire series, but pirates, man. They get me every time. I blame it on growing up and riding the ride at Disney back in the day.

I digress. I wouldn't say this movie was without its flaws, but I think it's a good starting point for a divergence of Jack--which is actually what I had originally WANTED with the actual sequel (#2, that is). We learn a lot about Jack in this movie. We learn a lot about the people around Jack as well. And we kind of get a sense for how he turned out to be like he is. Not everything, of course--Jack remains, still, quite the complicated fellow--but a lot.

And the rest of the characters, old (like Barbossa) and new (like our lovely love interest), are fantastic. My only complaint about the series is that they still enjoy telling without showing, and they rarely like telling you the whole back story.

But Jack still remains my favorite pirate, and that is, quite frankly, that. I'm actually looking forward to the next.

joel wingReviewed in the United States on August 28, 2020
4.0 out of 5 stars
Another great adventure for Capt Jack Sparrow
Verified purchase
On Stranger Tides was the fourth Pirates of the Caribbean film. This time Captain Jack Sparrow (Johnny Depp) was looking for the Fountain of Youth. He had help from his trusty mate Joshamee Gibbs (Kevin McNally), but in his way was a former lover Angelica (Penelope Cruz), his old rival Captain Barbossa (Geoffrey Rush), Blackbeard (Ian McShane), and the Spanish.

The movie returns with the comedy action that made the rest of the series as seen by Sparrow’s escape from a court at the start of the story. There’s gun and swordplay, acrobatics, stunts, one liners, etc. The supernatural returned too. Blackbeard had magical powers and a mermaid was necessary to find the Fountain.

Those elements basically define the entire Pirates of the Caribbean series and On Stranger Tides was no different. There was plenty of fun, adventure and action and Depp did his usual great job as Sparrow.
C
2 people found this helpful

Crackles McFarlyReviewed in the United States on December 26, 2018
1.0 out of 5 stars
Could have cut out 45 minutes of this movie.
Verified purchase
45 minutes could have been CUT from this movie, way way too long.

I would have had a migraine with stomach problems watching a movie this long in a movie theater because of it being 45 minutes way way too long.

'oh a peanut' is only funny the first time!

Johnny Depp was buried inside an air conditioned Gold Mine with this movie series but thought he was a struggling actor.
5 people found this helpful

YaroslavReviewed in the United States on February 12, 2018
3.0 out of 5 stars
I kind of expected more out of this one!
Verified purchase
Ok, here is the thing: First One was a classic! Second one had a great story line! Third pushed it with the story line details, way too much, too long and just plain messy but was still acceptable. This one took a detour in a completely different direction with not enough story and mainly focusing on Jack and his previous love... Still ok and worth while giving it a rented look but I am pretty sure one would miss very little if were to skip directly to the 5th installment!
5 people found this helpful

Kevin CarnahanReviewed in the United States on June 22, 2020
3.0 out of 5 stars
Much better than a toothache...
Verified purchase
...or a fast food meal, or a live concert of elevator muzak...

...actually, it sort of IS a fast food meal. It's a product, nicely packaged and easily digestible.

It's a remarkable statement to rate a film with three stars merely because it's not so jaw-droppingly awful as the last two Pirates films (#2 and #3, except for the inspired absurdism in the Davy Jones Locker scene of #3). While the whole franchise has been exhausted since #2 (yes, the first film is lots of fun), this managed to be more interesting and made more sense than the others while mostly keeping on track and keeping the self-aware B.S. to a minimum. The cast is on point and the noisy "let's-disregard-basic-physics" action sequences don't seem to go on forever this time. Nice, too, that's it's significantly shorter than the previous films. Gives you less time to roll your eyes and wish you were watching Dr. Zhivago again.

BeccaReviewed in the United States on October 8, 2019
5.0 out of 5 stars
Very good movie
Verified purchase
Without all the original cast, I was skeptical about watching this PotC, but it delivered.
The cast was awesome. We were introduced to entirely new individuals with a different agenda. Jack Sparrow was his same awesome self, where things worked out well despite him acting like he has no plan whatsoever.
The story was awesome, and the characters were well done. I enjoyed this film.
2 people found this helpful

Aaron BunceReviewed in the United States on December 22, 2015
4.0 out of 5 stars
I hated At Worlds End the first time I watched it ...
Verified purchase
I hated At Worlds End the first time I watched it in movie theaters. The next time I watched it, I found that I enjoyed it. Now, it is actually one of my favorite movies. Yes, it has some writing flaws. But it takes a lot of chances, and oftentimes big budget releases won't do that. I honestly didn't have any preconcieved notions about On Stranger Tides, but I was worried about the state of the franchise minus Orlando Bloom and Kiera Knightly. All in all, I found this to be a fun offering. Did it continue in the epic tradition of the first three? Yes, but not entirely. I thought the love story arc, mixed with Jack Sparrow's comedy, overlayed with treasure, curses, famous ships, and a world in transition really made for a compelling narrative. One bright spot was Penelope Cruz. I thought she added a nice dynamic opposite Depp.
11 people found this helpful
See all reviews
Back to top
Get to Know Us
Make Money with Us
Amazon Payment Products
Let Us Help You
EnglishChoose a language for shopping. United StatesChoose a country/region for shopping.
© 1996-2021, Amazon.com, Inc. or its affiliates