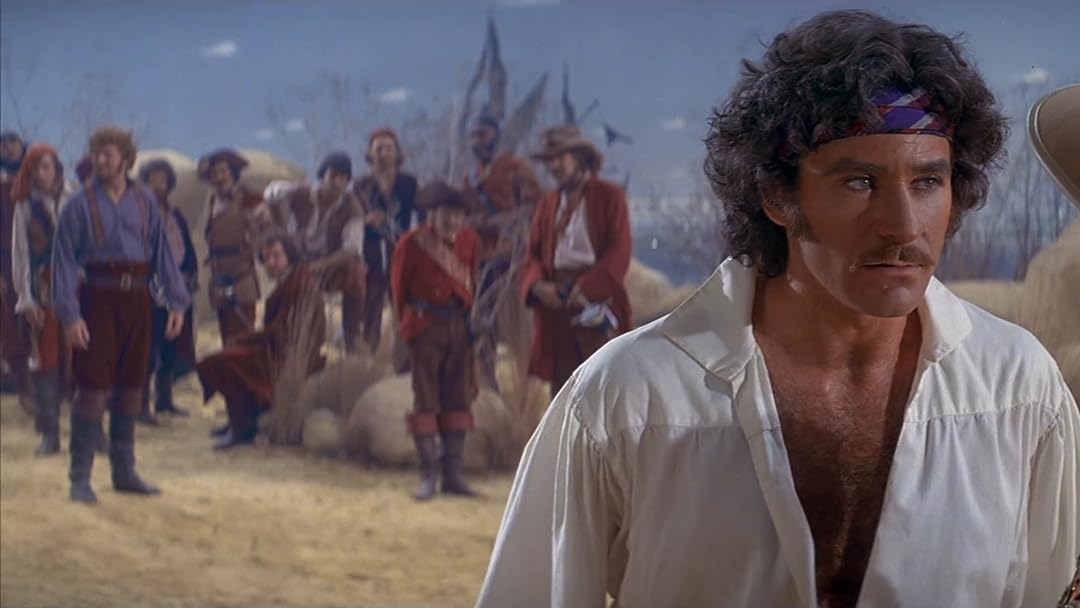 The Pirates of Penzance

(1,833)
7.11 h 52 min1983X-RayG
Kevin Kline, Angela Lansbury, Linda Ronstadt, George Rose and Rex Smith star in this musical comedy of mistaken identity with all the laughs and songs that made it a Broadway smash!

Geetar DonReviewed in the United States on February 13, 2019
5.0 out of 5 stars
Beautifully Mastered and Big Screen Ready
Verified purchase
This film version of the famed Joseph Papp production of The Pirates of Penzance will appeal to a subset of a subset of the Blu-Ray viewing population: Gilbert and Sullivan fans who treat such as fun entertainment, but not as part of a classically-focused arts religion. -A POV with which Archibald Grosvenor would likely heartedly agree, but with which Reginald Bunthorne might well not.

In any case, and of interest to us here, this Blu Ray gets that filmed production right. With all the color and detail available and in the original released Panavision widescreen format. Truly "big screen" ready.

Seen on a good home projection system it looks at least as good as it appeared in the few theaters that carried it back in 1983.

I've always loved this production, accepting it for what it is with all its shortcomings and its many, many strengths. And thus for me this release is truly a dream come true.

The disc itself has not only no "extras," it doesn't even have a menu. Insert the disc, hit "Play" and the film starts. (Frankly I wish more Blu-Rays were like that -- or at least had it as a viewing option with the menus and whatever only appearing when such was called up with a dedicated 'button.') In any case it is good to know in advance. What you are purchasing here is the film, beautifully mastered, and nothing more.

If that's plenty for you (as it is for me) then this Blu Ray release of The Pirates of Penzance is absolutely recommended.

RANDELReviewed in the United States on March 12, 2020
2.0 out of 5 stars
"THE PIRATES OF PENZANCE " AS A LIVE-ACTION CARTOON
Verified purchase
I don't know quite who this film was made for. It is directed and photographed as a live-action cartoon by someone who is clearly a stage director. The patter songs are sung at absurdly rapid rates, no doubt because the director assumed the audiences wouldn't understand them anyway. And the wonderful Patricia Routledge (from the original Theater-in-the-Park production) is replaced by the equally wonderful Angela Lansbury, no doubt because the producers thought she might sell an extra ticket or two. {Though it would have been nice to introduce Miss Routledge to a wider audience before her British sit-com KEEPING UP APPEARANCES made her a favorite on PBS as "Hyacinth Bucket (pronounced "Bouquet)."] All-in-all, I would recommend the DVD of the live-action stage performance...though (alas) it's out-of-print now and rather pricey. But apart from Gilbert's lyrics, this is definitely a film version for 12 year olds.
6 people found this helpful

wisdomstarReviewed in the United States on October 18, 2018
5.0 out of 5 stars
blu-ray - great color and sound - subtitles - great cast - great fun!
Verified purchase
I've always liked Gilbert and Sullivan and Kevin Kline. To find this on blu-ray is an added plus. Two cast members that were new to me are George Rose ( the Major-General) who I thought was outstanding, and Rex Smith whose voice and looks would make you wonder why any girl would turn him down. I knew Kevin Kline could sing, but this1982 version of him as the swash-buckling Pirate King would give Errol Flynn a run for his money. Angela Landsbury and Linda Ronstadt are very good as well. Modern feminists will have a problem with attitudes toward women. Just think of it as a history lesson about a time almost a hundred and fifty years ago. It's a satire - try and find the hidden agenda.
9 people found this helpful

BeeReviewed in the United States on September 7, 2014
5.0 out of 5 stars
Big, jolly production of a classic!
Verified purchase
I've loved this one for a long time and it consistently tickles my funny bone! What a treat to finally see a beautiful version on screen instead of my old streaky, stretchy, grainy VHS taped-off-broadcast version. The overall production is "stagey" -- as intended - which may be a distraction for some viewers but the performances are fabulous. Kevin Kline redefines "swashbuckling" and apparently enjoys every minute of it. Angela Lansbury is a joy; and Ronstadt is sweet...her vocals (not surprisingly) are terrific. I remember Rex Smith's heartthrob days (when this was filmed), adding a funny sense of nostalgia, and he's good...but his part feels the most "dated" now. Which is a little crazy because the whole thing has a wacky old-fashioned touch to it. If you want to introduce G&S to a newbie, and they already like stage/theatre, this is probably a good place to start.
25 people found this helpful

John ClementReviewed in the United States on May 25, 2015
5.0 out of 5 stars
Great production
Verified purchase
Great video with all of the wide screen pictures as it should be seen. It is not your grandmother's Gilbert and Sullivan, but it was brought into the modern era while still retaining much of the charm of the original. One wishes it would come out in Blu-ray so we could see it with good resolution of the details. The very wide screen theater version necessitates letter boxing on top and bottom so the limited DVD resolution is further reduced.

The singers are all up to the demands of the music and some sing it in a more modern popular style, which I am not fond of, but it works. Pirates is more operetta than American musical, and that has been retained. The sets are really fun because they are sometimes obviously props with a painted background and other times they have realistic looking backgrounds. I loved being able to clearly notice the obviously stuffed parrot on the pirate's shoulder. One of the greatest scenes is the dancing/singing policemen.

This can be enjoyed by all ages and children will watch it over and over again, so be warned if you don't want to get sick of it.
7 people found this helpful

Linnaeus C. ShecutReviewed in the United States on September 4, 2018
4.0 out of 5 stars
Enjoyable theater.
Verified purchase
This is a very enjoyable production which combines musical stage and screen. The Pirate King, Kevin Klein, seems to have inspired the Jack Sparrow character in "Pirates of the Caribbean." Mabel's (Linda Ronstadt) "Poor Wand'ring One" has passages at the end that seems to spoof the Mad Scene from "Lucia di Lamermoor." George Rose's Major-General, running at night in a gentle wind, plays a delightful "nance." Rex Smith sings with full voice and looks quite good. The constabulary does a very entertaining dance routine and reminds one of the "Keystone Kops."
2 people found this helpful

Jen W.Reviewed in the United States on September 2, 2015
5.0 out of 5 stars
A Great Introduction to Light Opera
Verified purchase
I enjoy other versions of the work of Gilbert and Sullivan, but I LOVE this DVD. It is difficult to say what is the best part of this production, but if I had to choose I would probably say it is Kevin Kline. He is incredibly entertaining as the Pirate King. The other actors are great, but he is the star of the show. I love the music and always have a smile on my face as I view it. We have watched it over and over again as a family and my children have invited friends over to share the experience with them. We hope the next generation will enjoy it as much as we do as we introduce them to a fun show.
7 people found this helpful

JannReviewed in the United States on November 1, 2020
5.0 out of 5 stars
A Favorite Gilbert and Sullivan Performance
Verified purchase
This recording was made about 40 years ago, and cinematically we've come a long way since then. Yet, I'm incredibly grateful to hear Linda Ronstadt's exquisitely beautiful voice, see Kevin Kline's superb and athletic sense of comedy, and marvel at Tony Azito's impossibly loose-limbed wild and crazy dancing as the police sergeant. The rest of the cast is top notch, too. The Pirates of Penzance is a Gilbert & Sullivan classic and seriously entertaining. The live performance decades ago was a smash hit and I'm thankful that we have the DVD to enjoy and appreciate.
See all reviews
Back to top
Get to Know Us
Make Money with Us
Amazon Payment Products
Let Us Help You
EnglishChoose a language for shopping. United StatesChoose a country/region for shopping.
© 1996-2021, Amazon.com, Inc. or its affiliates