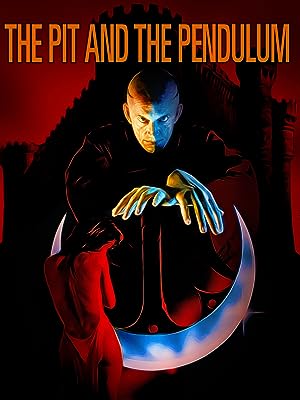 The Pit & The Pendulum: REMASTERED

(207)
6.01 h 36 min201818+
In the quest to save souls, the Spanish Inquisition will stop at nothing and knows no boundaries for its evil. Maria must find the power to save her husband from the ultimate machine of torture: the razor-sharp pendulum poised over the pit of hell under the direction of Torquemada the Grand Inquisitor of Spain!

DesiReviewed in the United States on April 28, 2019
4.0 out of 5 stars
pit and the pendulum
Verified purchase
I have been a fan of full moon since I was little and am glad to see there films are now available on amazon through their channel. With that said this a scary film as far as the acts of torture and the way women are treated. But that is why its a horror film. Great title by full moon. I enjoyed it. Lance Henrickson does a pretty decent job playing the villain in this role. Torquematta reminds me of Frollo from hunchback of notre dame. Pretty much are the same characters, practically. Another win for full moon with this film.

PrimotenoreReviewed in the United States on August 31, 2013
3.0 out of 5 stars
Not your mama's Pit and the Pendulum...
Verified purchase
**Minor Spoiler Alert**
I bought this movie because Lance Henriksen has a starring role in it. I am a huge fan of his and there are definitely scenes in this flick where Henriksen shines. Unfortunately, the rest of the cast, including the great Oliver Reed, appearing in a cameo, don't have much of a script with which to work. Indeed some of the lines are so anachronistic, that they are laughable. Set during the Spanish Inquisition, there is a scene where the male lead, a baker, is strapped to a chair and a fire is lit beneath him. He laughs hysterically and says "If you want to toast my buns, you'll have do a lot better than that!" And so on and so forth.
Picture quality averages under 24Mbps; not great, but a definite step up from SD. There are NO subtitle options. That's cheap. Amazon incorrectly lists this film as having an aspect ratio of 1.33:1 FALSE. It's 1.66:1, widescreen. That's good.
Bottom line: The movie is kinda fun; the female lead is smokin' hot and you get some full-frontal nudity. The torture scenes are pretty gruesome. All in all not enough however to give this film a reservation free recommendation. Still, for fans of Henriksen, it's a pretty safe purchase.

MikeFrettReviewed in the United States on March 27, 2014
3.0 out of 5 stars
DVD and Blu-ray users cheated
Verified purchase
Echo Bridge strikes us down again with another quality (lol) release. The Movie itself is fine, I enjoy it but the DVD is sub-par with hints of artifacts and blurring. Incidentally, Blu-ray users got the shortest of the stick with a non-original 1.85:1 picture that's missing 20-30% of the picture from the top and bottom compared to the DVD 4:3 version. The Blu-ray version also has a sub-par picture no better than an upscaled DVD.

The problem is Echo Bridge, formerly Platinum Disc; they care more about quantity than quality in their new strategy. The encodes they do are low bit-rate under a Constant Quality setting instead of Variable and tests show it on all their disks. They also use only single layered disks and try their best to pack other movies etc. all on that single layer. We are left with garbage.

Since this is such a nice movie, it's unfortunate how it was butchered; for all of us. It's harsh, but the movie loving public would be better off if this company simply went away.

Leo HottReviewed in the United States on November 26, 2015
5.0 out of 5 stars
Best "Pit & the Pendulum" Ever!!!!
Verified purchase
Hands down my favorite interpretation of this Edgar Allen Poe classic!!! Stuart Gordon cleverly places the story in one of the historically scariest times ever during the Spanish inquisition!!! With historically authentic characters like the grand inquisitor Torinago( please excuse my spelling) Gordon true to form gives us enough comic relief to handle the horror!!! Although the scene in which a dead man is ruled a heretic and exhumed to have his corpse beaten is comically portrayed it doesn't change the sad reality that , that kind of stuff really happened!!! This was actually done to one of the first men to translate the Bible into English!!! The costumes are great as well as the acting! This movie has it all suspense , drama, humor, horror & action!!! The only problem is where in your collection do you place this movie? Period piece? Horror? Comedy? Action Adventure...you decide but if you have never seen it you should give it a try especially if you get it at the same price I did.
2 people found this helpful

Joseph MoralesReviewed in the United States on September 18, 2012
3.0 out of 5 stars
A Lesser Effort from Stuart Gordon
Verified purchase
Stuart Gordon is a name director in the horror genre chiefly for his outrageous adaptations of Lovecraft tales (Reanimator, From Beyond, and Dagon). It's not surprising that he and screenwriter Dennis Paoli should have turned to Poe for more inspiration. However, it's another case of a movie being expanded from quite a short tale, so despite the inclusion of an homage to "The Cask of Amontillado," there's not actually much Poe in the result. Paoli has come up with a semi-comic adventure tale about a young baker's efforts to rescue his wife from the Inquisition. Lance Henriksen makes a remarkably tormented Torquemada; Rona De Ricci is charming and heartfelt as the unfortunate Maria. The great Jeffrey Combs extracts a few laughs from role as a cluelessly earnest inquisitor. However, it seems doubtful that a movie could truly chronicle the tortures of the Inquisition without becoming either incredibly depressing or deeply, offensively exploitive. Part of the problem with tone is simply one of lighting; though apparently filmed on old European locations, the film has almost a TV sitcom look to it. In sum, there's enough here to make one admire the talents of the people involved and hope they can find a better vehicle next time.
2 people found this helpful

Count-KarnsteinReviewed in the United States on May 12, 2000
5.0 out of 5 stars
Another Stuart Gordon Classic!
Verified purchase
Quite possibly the best Full Moon film in it's catalogue, The Pit & The Pendulum is a great tale of lovers caught up in the Spanish Inquisition who are unjustly convicted by the evil Inquistor (Lance Henriksen).
The stars cast in this film do an amazing job. Henriksen is terrific as the evil Inquisitor, and also a little tragic. Rona De Ricci plays the beautiful Maria perfectly. Innocent, naive, and angelic -I couldn't get enough of her on the screen. It's too bad I haven't seen her in anything else since this film.
The rest of the cast is composed of a great mishmash of talent like Jeffrey Combs and Oliver Reed!
Stuart Gordon hasn't let me down yet. I am flabbergasted at how well he can make a film with tight budget constraints. I always look forward to his films.
4 people found this helpful

M. S. EibonReviewed in the United States on December 4, 2011
4.0 out of 5 stars
One of Henriksen's most intense performances.
Verified purchase
This film was originally a mid-budget project set to star Peter O'Toole and some other bigger name actors (who's names escape me now). That deal collapsed and the movie almost didn't get made. Director Stuart Gordon (ReAnimator, From Beyond, Castle Freak) was fortunately able to keep the project alive, although with a low budget and differnt cast (The only actor remaining from the original cast is Jeffrey Combs).
I saw this film several times upon it's release in 1991, and loved it. I always remembered it and wanted to buy a copy on video, but it was out of print for many years. It did appear on DVD a few years ago but it was only available as part of the Stuart Gordon box set and could not be found as an individual release. Now, finally, somebody has put it out on DVD. It's widescreen and the picture quality isn't bad. I wish they'd have used the original cover art, though. It was a cool poster. I can't figure out why a lot of companies don't use the original movie artwork on the dvd release. But that's a small complaint. The film itself is just as good as I remember. It has stood the test of time and doesn't feel dated at all. In fact I think I appreciate it more now than back in the day.
The movie takes place in Spain during the Inquisition and tells the story of the Grand Inquisitor, Torquemada, superbly portrayed by Lance Henriksen in one of his most intense performances. He and his cohorts spend their days torturing heretics, blasphemers, and witches; to death most of the time. Until he comes into possession of a beautiful young baker's wife, who happens to be pious, pure, a true christian (as opposed to the monsters of the Inquisition). He falls in love with her, but cannot deal with these feelings. Chaos and upheaval ensue. She is an accused witch and he is torn between saving her and letting the torturers have her.
Stuart Gordon manages to put every penny of his small budget on the screen. It looks great, with castle sets, dungeons, decent costumes, etc. The torture scenes are well done and nasty enough. Good FX work.
Mainly the two things that stand out for me are the really strong script and the intense, creepy, almost Nosferatu-like performance of Lance Henriksen. If you're a fan of Gordon films, E. A. Poe, Jeffrey Combs, or Henriksen, I say don't pass this one up. Recommended.
9 people found this helpful
See all reviews
Back to top
Get to Know Us
Make Money with Us
Amazon Payment Products
Let Us Help You
EnglishChoose a language for shopping. United StatesChoose a country/region for shopping.
© 1996-2021, Amazon.com, Inc. or its affiliates