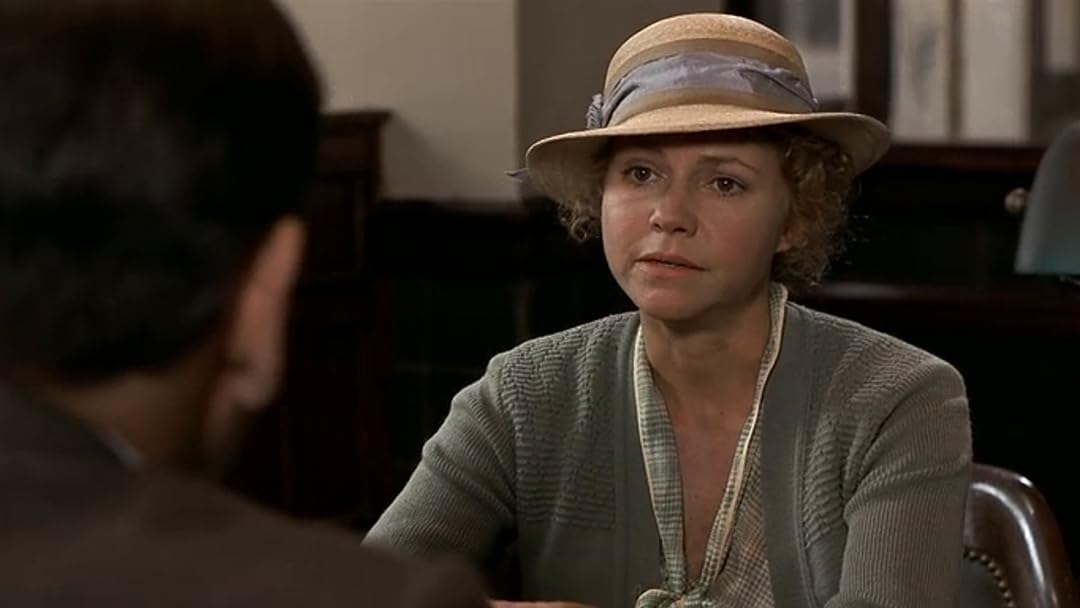 Places in the Heart

(2,067)
1 h 51 min1984X-RayPG
A widow struggles to save her farm during the Depression. Sally Field won an Academy Award(r) for herrole in this stirring drama, featuring great performances by John Malkovich, Danny Glover, Ed Harris, Amy Madigan and more.

Bob Y.Reviewed in the United States on December 28, 2020
5.0 out of 5 stars
A Movie For Our Times
Verified purchase
Racism is ugly, vile and disgusting every time it is exposed within someone. So many who like to think of themselves as "good church-going people" harbor this filth and rot within their heart.
Racism is stealing in the worst way, because it is theft when we take away the God-given inalienable rights of certain American citizens because of the color of their skin. One of the Ten Commandments is "Thou shalt not steal."
According to the American Constitution, white people didn't give black and brown people their rights. Their Creator gave them the rights of life, liberty and the pursuit of happiness when they were born. Those rights already belong to them.
So when one harbors racism within their heart, they needn't feel like they have been "saved" because Jesus is not in their heart next to all of that filth.
I believe this is the main story-line of this movie and is high-lighted in the last frames of the movie.

DLKNWORReviewed in the United States on January 24, 2021
5.0 out of 5 stars
KKK MOTIVE
Verified purchase
I'm sure I've watched this at least once or twice over the years and was surprised how it held my attention all over again. I don't usually write movie reviews, however, I did want to respond to another reviewer's take on the KKK scene. I understood their presence to be based on Moses stepping out of his place while advising the widow how not to get ripped off by purchasing substandard seed and again while negotiating cotton prices at harvest. This was twice the gin owner/one of the klansmen was outsmarted by not one but two of his perceived inferiors ... a woman and a "negro"! Both his ego and his wallet took a blow and he found a way to hit back, hard. I also appreciated what looked to be the authenticity of their klan costumes coming up short as made out of flour sacks (depression).
12 people found this helpful

J. Jeffrey DonahueReviewed in the United States on May 22, 2019
4.0 out of 5 stars
Almost great (contains spoilers)
Verified purchase
This is a very good film that had the opportunity to be a great one. Both Sally Field and Danny Glover are great, and the sets and location filming brings the Great Depression back to life. Less confidently handled is the issue of racism, which given the time (1935) and place (Waxahachie TX) is evidently supposed to be a main theme of the film given that the male lead character is a black man. The first two scenes that dealt with the racial issue were fine, however the third was not. Toward the end of the film the Ku Klux Klan pops up from out of nowhere and beats up Moses, the character played by Danny Glover, for no reason. The KKK was undoubtedly a terrorist organization but they also had motives for their actions, and there is no motive here that the viewer can detect. Moses has done nothing wrong and really has not behaved in any way that should upset the power structure. The appearance of the KKK almost appears to have been thrown in at the last minute while filming simply because some realized that there was no scene with the KKK in a move where racism is a strong theme. The scene with the KKK has the effect of making he film not quite believable Finally, the ending with the scene in the church where all of the characters from the film, living and dead, are reunited is just plain stupid. Still, more than worth a watch because the story is good, the main actors are great and the production values are great. Other films which handle the issue of racism much better are "In the Heat of the Night", "Odds Against Tomorrow" and "Donovan's Reef".
11 people found this helpful

BixReviewed in the United States on January 20, 2021
5.0 out of 5 stars
It's Right, It's Good.
Verified purchase
This flick doesn't need another review. Even if you have as little soul as a worn Nike, you'll like it just fine.
COMPLAINT:
Darn it Amazon. Will ya' STOP putting in TRIVIA that is just PLAIN WRONG?! The Guitar is a D-18, NOT a D-28 and it was made AFTER 1938 because the neck width is 1-11/16th inch width at the nut, instead of 1-3/4th inch at the nut, —as a 1934 or 1935 version would have. Plus, the body shape is slightly different prior to 1936. (Remember; the story stakes place in 1935).
Original price for a D18 in 1940 was $90. A D-28 was $100., If you multiply by about 34 times, you will get the modern new price for a new D-18 with identical tech specs. Price conversion is done by using comparative automobile prices, as automobiles use parts from almost every industry. E.g., a 1932 Ford, Model A, V-8 sold for about $900. This was Clyde Barrow's favorite car because it was FAST. Not even the cops had V-8s or straight 8s. In this case, the current resell price is skewed past Martins! Why? Because a 1932 Ford V-8 is also known as a DEUCE COUPE.
A prewar C.F. Martin D-28, built prior to 1943, in VG to EX- condition, will fetch about $50,000 - $60,000, and a D-18 of the same vintage slightly less (but not always).
A Martin D-18 mainly differs in that the back & sides are made from Honduras Mahogany, whilst a D-28 back and sides are made from Brazilian rosewood (Dalbergia nigra). A pre-1946, D-28 (prior to mid 1946) has herringbone purfling, not the type of celluloid tortoise-like binding that the D-18 in the film has, and ALL D-18s have. These days, a pre-war D-18 in VG condition made between 1939 and 1946 (as shown in this film), sells for a little less than a D-28, but not much less. A special D-18 may fetch more. The guitar in this film looks to be in VG- condition and has replaced tuning machines. Instead of the modern Grover Rotomatics, —it should have Grover open-back gear G-98s or plastic-head G-52s. This is minor and can be set back to original.
I have a 1940 D-28 which I play. It is worth absolutely NO money, because it is not for sale.
Some things, have an existential price.

MikeReviewed in the United States on April 4, 2019
5.0 out of 5 stars
Good movie - GREAT cast!
Verified purchase
The story is about a small Texas community during the Depression. Racial tensions, physical handicaps and hardships, marital relationships gone wrong, etc. Sally Field's well-deserved 2nd Lead Actress Oscar; John Malkovich is perfect; Danny Glover is wonderful. There are a lot of familiar faces here, and none disappoint.
7 people found this helpful

Jim BolesReviewed in the United States on April 4, 2019
5.0 out of 5 stars
nice period piece
Verified purchase
There isn't much to nit-pick with this movie. Only that I wonder how she will make it without her hired-hand. She learned a lot for sure, but made some enemies along the way too. She squeezed by, but what about next year. And, maybe that the sign of a very good drama and character development. I actually cared enough to think about her.
5 people found this helpful

ChristinaReviewed in the United States on February 15, 2021
3.0 out of 5 stars
HATE HAS TO STOP!
Verified purchase
I just wish we could STOP ALL THE HATE. I will never understand why others choose to Hate. People are people, the color of their skin is something they can’t choose, just as their gender is not a choice.
There is diversity all around us, why do some choose to vilify the different colors of people? If we do this, why not discriminate against certain kinds of trees or flowers. Better then that, we could discriminate against short people or tall people, brown eyed people or blue eyed people......you can discriminate against so many other differences........BUT THE FACT REMAINS, NO MATTER WHAT COLOR YOU ARE, IF YOUR EYES ARE BROWN, BLUE OR HAZEL......WE ARE THE SAME INSIDE, we all need BLOOD, we all need AIR, and we all need FOOD.......WE HAVE MUCH MORE IN COMMON!
We have to respect each other. It matters.

Lana LorenzenReviewed in the United States on November 12, 2019
4.0 out of 5 stars
Very good movie.
Verified purchase
I've always like Sally Field and I've been watching her on the small and big screen ever since her TV show, Gidget and the Flying Nun. She's a very talented and capable actress. This is another film that showcases her talents. The side love story between two other characters is a bit side-tracking and I wish the ending of the movie had been different. The African American hand she hires helps her sell her cotton at a profit so that she can pay off her farm. The story takes place in the South during the Depression so that act alone would get the farmhand lynched. So, he's forced to leave. Danny Glover is the hired hand and he's also one of my favorite actors.
One person found this helpful
See all reviews
Back to top
Get to Know Us
Make Money with Us
Amazon Payment Products
Let Us Help You
EnglishChoose a language for shopping. United StatesChoose a country/region for shopping.
© 1996-2021, Amazon.com, Inc. or its affiliates