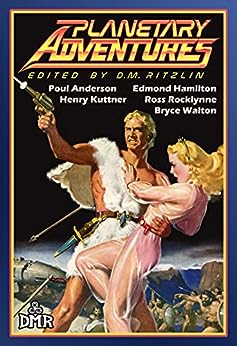 by Poul Anderson (Author), Henry Kuttner (Author), Ross Rocklynne (Author), Bryce Walton (Author), D.M. Ritzlin (Editor) & 2 more Format: Kindle Edition
See all formats and editions
Sorry, there was a problem loading this page. Try again.
Heroic tales of sword-swinging adventure can sometimes be found in unlikely places—such as the pages of Golden Age science fiction magazines! Rather than being set in the dim past or a fantastic dream-world, the stories in this collection take place on other planets. Journey to Luna, Mars, and worlds even more distant with these classic tales by five masters of adventure science fiction!

Stories included:
“The Temple of Earth” by Poul Anderson
“World of the Dark Dwellers” by Edmond Hamilton
“The Eyes of Thar” by Henry Kuttner
“The Empress of Mars” by Ross Rocklynne
“Man of Two Worlds” by Bryce Walton
Read more
Previous page
Next page

4.4 out of 5 stars
4.4 out of 5
14 global ratings
How are ratings calculated?
To calculate the overall star rating and percentage breakdown by star, we don’t use a simple average. Instead, our system considers things like how recent a review is and if the reviewer bought the item on Amazon. It also analyzes reviews to verify trustworthiness.
Top reviews

Robert L. Piepenbrink
4.0 out of 5 stars Sword and Planet Rides Again!
Reviewed in the United States on July 25, 2021
Verified Purchase
Really, in terms of value for money, it deserves a fifth star. Four stars for quality of writing is about right.

You can't buy a First Class ticket to Barsoom these days, but two of these stories were good second class. Kuttner's "Eyes of Thar" could have been a Northwest Smith or John Eric Stark story, and Rocklynne's "Empress of Mars" is first-rate pastiche Burroughs--more so, really, than a lot of the later Burroughs Mars books. Very glad to find this, and I'll be happy to buy Planetary Adventures II if he can do it again.

Matthew Higgins
5.0 out of 5 stars Excellent Escapism
Reviewed in the United States on June 15, 2021
Edgar Rice Burroughs set the planetary adventure template with A Princess of Mars: A down on his luck character zipped to another planet with humans/near humans to get a fresh start and usually with a romance and a kingdom coming his way too. When young, these stories speak to the reader who yearns for adventure when stuck behind a school desk. When older, these stories speak to the reader stuck behind an office desk and thinking back to earlier days of life. Pulp authors Poul Anderson, Edmond Hamilton, Henry Kuttner, Ross Rocklynne, and Bryce Walton all follow ERB's planetary adventure template in the stories collected in this DMR anthology. Due to their length, they read quicker than an ERB novel. Nevertheless have just as much fun in them. Thus they're the perfect for escaping during a lunch break, be it at school or at the office.

Kilsern
4.0 out of 5 stars Rocket Fueled Adventures from DMR
Reviewed in the United States on June 15, 2021
Sword and Planet is the first cousin of Sword and Sorcery fiction. It may have started with Edgar Rice Burroughs, but the genre didn’t end there.

DMR continues the uncanny ability of knowing exactly what I want to read. The names Poul Anderson, Henry Kuttner and Edmond Hamilton were enough to get me to punch my ticket for the rocket ride, but they added two, new to me, authors: Ross Rocklynne and Bryce Walton.

Five stories make up this fast paced book. Even though I’m familiar with Anderson, Kuttner and Hamilton, all three of their stories I had not encountered before.

The stand out story for me was the last (and longest) “Man of Two Worlds” by Bryce Walton. Walton gives us a planetary adventure steeped in famous mythology. It was a treat to read. Side note, while reading the last story it reminded me of Dan Simmons’ Ilium/Olympos series. I wonder if Mr Simmons encountered it before?

These stories were published in the 30s/40s/50s in rags with names like Rocket Stories and Space Stories. They are not modern and might be off-putting to some modern readers; however, if like me, you enjoy Edgar Rice Burroughs and Otis Adelbert Kline and can place nostalgia above modernity, you will enjoy this book.

Richard Fisher
4.0 out of 5 stars Good classic fun
Reviewed in the United States on June 15, 2021
DMR Books has collected five tales of interstellar outlaws and outcasts. All of which have rarely been seen since their initial printings. If adventure against an alien landscape is what you are looking for then look no further.

The Temple of Earth by Poul Anderson

Rikard and his companions are running for their lives. Living as criminals on the fringe of lunar society, they have nowhere left to hide. A deal with the devil will upset the status quo.

Anderson always delivers the goods. It's nightmarish to imagine living in a hostile environment with finite resources. Probably not as scary to someone born to it like the characters of the story though.

World of the Dark Dwellers by Edmond Hamilton

A death bed confession sends Eric North on a journey and adventure beyond his wildest dreams. A usurped throne is the prize, but the Dark Dwellers will not be denied.

This so reminded me of the Darwath books by Barbara Hambly. I wonder if she was inspired by this story or is it all coincidence? Regardless, if you like this story seek out Hambly's Darwath books; they're worth it.

I've only recently learned to love Hamilton's sci-fi adventure stories. I always assumed what he wrote wouldn't be something that would appeal to me, but I was dead wrong. Thanks to DMR Books I've discovered another author to enjoy.

The Eyes of Thar by Henry Kuttner

With the death of his love, Samuel Dantan has turned outlaw. The authorities are hot on his heels, it's only a matter of time before they run him to ground. Finding an unexpected place to hide Dantan meets a stranger who is a dead ringer for his love, with her own set of problems.

This story begins quite a bit like a revenge western, which I dug quite a bit. The rest of the story? Meh. Kuttner is an author I feel I should read more of, but the few things I've read I just end up feeling indifferent about.

The Empress of Mars by Ross Rocklynne

Darak of Werg is searching for his Princess. She was abducted by the Empress of Mars. The Empress will not be satisfied until all of Mars is under her heel. Darak's quest has one problem, he has never laid eyes upon his princess. An unexpected ally will assist him in his quest.

This is the first Rocklynne story I have read. It's really a heroic fantasy story set on Mars. Enjoyable, I wouldn't mind reading a few more like it. Although the love at first sight theme gets tiresome in these type of stories. Also Rocklynne is given to using footnotes. Footnotes can be interesting but in this case I found them a nuisance and distraction from what is going on. Add those details into your manuscript not as a footnote.

Bryce Walton is an author I've never heard of. His story may be the longest in the collection.

A group of outcasts are being persecuted. Discovery of some ancient gateways to other times and places gives the outcasts a place to flee. They find themselves on an ancient Mars with many names very familiar to Earth's ancient past. The truth will turn an ancient Earth myth on its ear.

The story was interesting, but Walton tends to be repetitive and redundant. I guess he just wants to hammer the point down. Also a certain barbarian from Cimmeria makes an appearance, which was both surprising and jarring.

Another fine anthology to add to my collection. Some stories I enjoyed more than others, but overall each provided elements that I enjoy in my fiction. Of course there is always a big thank you to DMR Books for dusting these stories off and putting them in book format.

Anthony P.
5.0 out of 5 stars Fun Retro Sci-Fi
Reviewed in the United States on June 15, 2021
The stories in Planetary Adventures harken back to the Edgar Rice Burroughs mode of storytelling. Protagonists pop into a new world chock full adventure, intrigue, sword fights and of course, a princess to save. Golden Age heavyweights such as Kuttner, Anderson and Hamilton all put in their proverbial two cents on the sub-genre. All that's missing is Otis Adelbert Kline and Leigh Brackett. Good stuff!
Read more
3 people found this helpful
Helpful
Report abuse
See all reviews