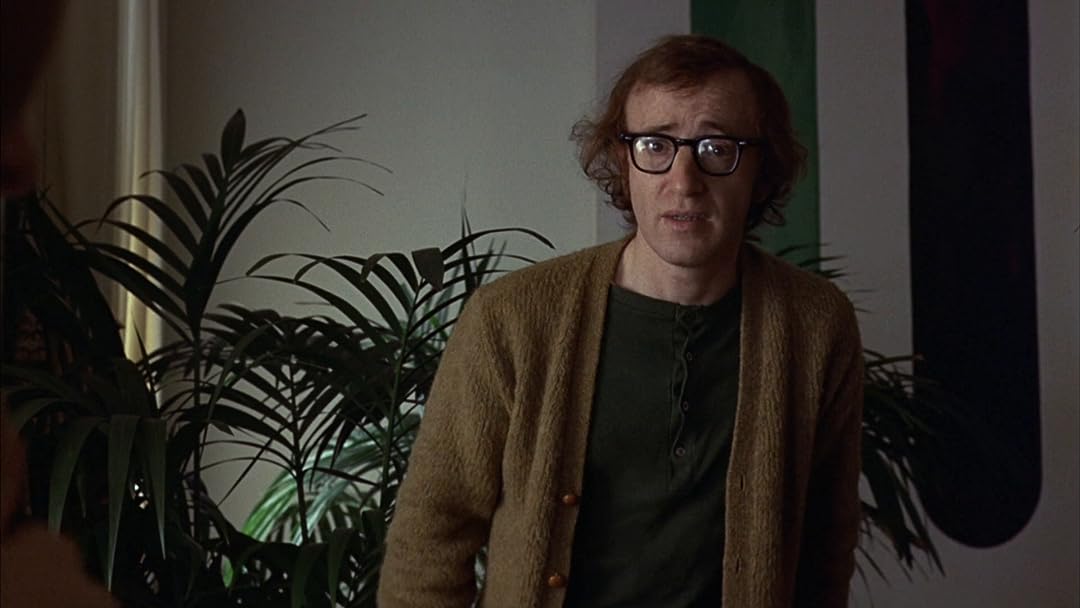 (781)
7.61 h 25 min1972X-RayPG
Unlucky in love, Allan Felix (Allen) is a film critic who gets dumped by his wife. Now, his married friends Dick and Linda (Tony Roberts, Keaton) try in vain to fix him up. Allan's dating skills are less than stellar, even though he keeps getting advice from a recurring hallucination...his film hero Humphrey Bogart.

lobomanReviewed in the United States on October 5, 2019
5.0 out of 5 stars
Woody Allen in the master hands of a director - perfect
Verified purchase
There are few comedian/actors who command the intelligent and physical comedic talent of Woody Allen. His own written and directed movies are classics, however Play it Again Sam is something special specifically because he did not direct. The transitions are smooth. You don't get the feeling that the ensemble are free-wheeling any improv in this. Here the arcs, story, timing, and acting are compellingly sweet and accessible perhaps because Allen's ego, as undetectable as it might be in his own films, is minus the responsibility of direction. As such, Diane Keaton is at her innocent and lovely best with beats that have a completely different rhythm than her work in Allen's directorial efforts. The entire cast is exceptional, but Woody Allen channels his neurotic energies into a character that is everyman - more than any of his other films except maybe Deconstructing Henry which is his artistic pinnacle in my opinion due to its blatant personal honesty. Play it Again, Sam is just pure film lover joy. I can't wait to watch it again, but first, because Bogart plays such a pivotal role in the screenplay, I'm going to have to watch Casablanca for the fourth time in preparation. For Woody Allen lovers, although Allen wrote it, the dialog is not nearly as psychologically intelligent and deep as his own films, instead we are treated with something more accessible, entertaining, endearing, and relatable. It's kind of the perfect marriage and transition from his Bananas-type work and his more introspective films later on.
15 people found this helpful

D. GrainerReviewed in the United States on June 21, 2019
5.0 out of 5 stars
One of Woody's best
Verified purchase
Been a fan of Allen's for a long time. Especially enjoyed his earlier works such as this one. "One of Woody's best". How can it be one of his best? There are so many of them. Personally I wouldn't say this is number one on my list, but it is close to the top, in the top five. I enjoyed his usual madcap way of describing things, such as the fight he had in the bar when his chin hit the guy's knee. There are two things that set Allen's movies apart from others. I know I will always be treated to some great music and there will be something to talk about after the film. This one is no different. Most of his films are about relationships and this one is fun for me because he relates it to his love for films and Bogart in Casablanca.
8 people found this helpful

Allen Garfield's #1 fan.Reviewed in the United States on March 2, 2019
5.0 out of 5 stars
Woody Allen: The funny years.
Verified purchase
Written by Woody, directed by the great Herbert Ross. His first film with Diane Keaton. On par with - and filmed during the same period as - Sleeper, Love and Death and Bananas. Filmed in 70s San Francisco(!), great location shots. Great premise, too!
9 people found this helpful

HwangReviewed in the United States on February 15, 2013
5.0 out of 5 stars
Grand Comedy by Woody Allen
Verified purchase
One of the few Woody Allen movies, featuring Allen in the leading role, but not directed by the maestro of comedy. Without a doubt one of his finest efforts on the silver screen.

The story revolves around Woody's character, being obsessed with Humphrey Bogart, constantly having conversations with the imaginary muse, who constantly advices him on how to tackle women after his wife, played by the always captivating Dianne Keaton, had left him, and finds him being set up on match making dates that leaves something to be desired and are totally wrong for him, dates fixed by his ex-wife's husband - who also happens to be his best friend, and, finding the opportunity to rekindle an affair with Dianne when her husband is out of town, he is faced with the dilemma of whether to pursue his romantic interest with his ex-wife and jeopardize his relationship with his best friend or to respect the marriage institution between Dianne and her husband. He decides on the latter.

The movie is interspersed with scenes from Casablanca from which it draws inspiration.

Surely one of the best early films by the maestro and a classic work du art.

ReenamoviesReviewed in the United States on May 12, 2013
5.0 out of 5 stars
Sweet movie
Verified purchase
I am a huge Woody Allen fan and have seen almost every movie he made (more than once). I believe that while not all his movies are equal in their quality, humor or sadness and pace, all of them are worthwhile. With that said there are amazing movies like Annie Hall, Love and Death, Vicky Christina Barcelona, Hanna and Her Sisters, Match point and very good ones like Whatever Works, You will Meet a Tall Dark Stranger, Midnight in Paris, Play It Again Sam. In this movie, while its a very cute and enjoyable movie the typical flashback to his childhood, scenes of Woodies cute clumsiness and great one liners are slightly uneven and the character development and plot are slightly thin. However the use of Humphrey Bogarts character, coaching Woody Allen and his challenges in dating and his ultimate decision in his relationship with Diane Keaton's character (and she is terrific as always) is creative and fun and there are some very funny moments. this movie left me with a smile at the end of this movie, which is always a nice feeling. To quote the late Rger Ebert: i give this movie a thumbs up.
7 people found this helpful

koneReviewed in the United States on April 27, 2011
4.0 out of 5 stars
Woody Allen Humor Makes Me Laugh Out Loud
Verified purchase
I loved this movie. Woody Allen is at his self-depreciating best in this early (1972) film. I loved the whole premise of the neurotic Allen Felix (Woody Allen), when suddenly dumped by his wife, tries to adopt the tactics of his Casablanca film hero, Humphrey Bogart, using Bogie's "tough" no-nonsense approach, to date new women. He enlists the help of his married friends (Tony Roberts and Diane Keaton), to set him up with eligible women, and in the process finds himself falling for his best friend's married wife. Woody Allen expresses many of the insecurities that many men have in the dating scene. Woody Allen's character is the exact polar opposite of Bogie, and this makes it all the more fun to watch him take "Bogart's" advice and try to implement it. I was laughing out loud many times throughout the film. Very enjoyable. The actor who imitates Bogart is superb in his role. His impression of Bogie is astounding.

I have watched this movie with people who are much younger than me, and they do not have as favorable a response to it as I do. Perhaps Woody Allen's humor is generational to the Baby Boomers, of which I am a member. I'd also recommend watching "Casablanca" before watching this movie, so one understands Allen's obsession with Bogart.

Kathleen Peron RindenReviewed in the United States on March 2, 2014
5.0 out of 5 stars
Indeed! Play it again and again, Sam!
Verified purchase
For those of you who love the film "Casablanca" and Woody Allen's wry, self-effacing humor on the plight of the common man, this film is a MUST! The cool and confident "Boggie" mistique is brought to life and comes to mentor and even haunt Woody's insecure male ego that has been predictably bruised by a woman who has just left him. With Diane Keaton's character as his love interest, Woody tries to find his own style for wooing women. While he may be no Rick from "Casablanca", Allen does find his way back to himself, which is "the start of a beautiful friendship" with life. Guaranteed to make you laugh, cry, and stand up for the little guy, this film delivers it all!
3 people found this helpful

LouisReviewed in the United States on March 29, 2013
5.0 out of 5 stars
One of my Favorites
Verified purchase
I am very biased when it comes to Woody Allen generally and this movie in particular. I love them both. This movie comes from that period when Woody Allen was at the very top of his game. This movie, along with "Love and Death" rank very high as two of my all time favorite comedies. For me, watching the witty, neurotic fumblings of Allen in these two movies give me a chance to laugh at the similar qualities I exhibited in my younger days.

I believe some people look at Allen a less than cool, less than glamorous screen figure, but that is a great part of the attraction of him in this role. And there are those who can't avoid being judgmental about his personal life. Well I say, set that aside for an hour or two and enjoy a very entertaining movie; a true comic classic. A lot of comedies are very funny for two-thirds or three-quarters of the movies. This one is funny and witty right up to the closing credits.
One person found this helpful
See all reviews
Back to top
Get to Know Us
Make Money with Us
Amazon Payment Products
Let Us Help You
EnglishChoose a language for shopping. United StatesChoose a country/region for shopping.
© 1996-2022, Amazon.com, Inc. or its affiliates