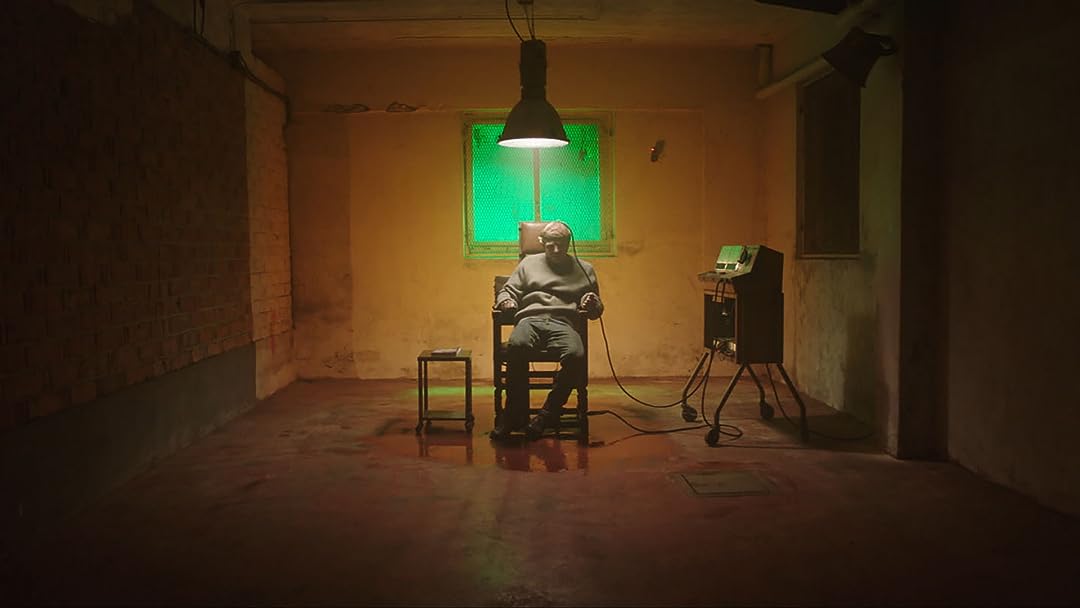 (109)
3.71 h 29 min2019X-Ray16+
Lucas and Chloe, two passionate gamers, decide to participate in Paranoia, a very exclusive escape game. Based in a remote, abandoned mental hospital, they find four other participants waiting to play. They soon realize that only one of them will make it out alive.

youvegotredonyouReviewed in the United States on October 25, 2021
3.0 out of 5 stars
Great until the ending. Spoilers in this review!!!
Verified purchase
Pretty fun deadly escape room movie! Until the ending which basically ruins it, I think.
It builds up pretty quickly with little introductions. We only get to know the main two, but what we learn is that they're super toxic.
By then, we're already in the asylum with lives at risk, but the pacing works because we're in survival mode. We're trying to figure out what is really happening, who's orchestrated everything, who to trust, etc..
There is some decent gore and weird puzzles. The acting is fine, but with such little character development it's difficult to truly judge their acting.
Then the climax... ugh. Crazy guy is crazy. Mom complex. Women complex. Norman Bates in a nutshell with an extra tinge of child abuse and mental institution, yep the same institution this all takes place. Groundbreaking.
It was a pretty good movie until the lazy ending.

Blue CanaeryReviewed in the United States on January 27, 2022
1.0 out of 5 stars
Movie contains domestic abuse (physical & verbal), gore, weak psychological horror (SPOILERS)
Verified purchase
In the hopes that I can avoid showing all the spoilers until anyone who wants to scroll past has the chance to, I'll start off by saying that I love horror movies. I read horror books. I write horror stories myself. I'm not turned off by gore or a good old fashioned scary asylum movie.

Now that I've gotten all of that out of the way, I'll explain what I liked about the film first:

1. There was some truly disturbing scenes of body horror and gore in the film that made me flinch. That doesn't happen all that often since I've seen a lot of horror movies over the years.

2. The musical score was good in quite a few places actually.

3. The actor who played Lucas did a fairly good job of acting (considering how bad the film was.)

Now, onto the spoilers:

The plot: Lucas and his ex-girlfriend, Chloe, are gamers who enjoy puzzles. When Chloe finds out about a game, called Paranoia, she teams up with Lucas to try to win a million Euro prize for solving all the puzzles first.

The couple obviously have some dysfunctionality in their relationship. That's clear from the start, but they work together anyway to figure out how to get to the site where the final part of the Paranoia game will be played. Once they get there (an abandoned mental health hospital), they see there's already several other players waiting on them for the game to begin. Maxine, Jablowski, Ray, and Naomi. Naomi apparently knows Lucas, but it's not clear how.

It doesn't take long before the players start being murdered in horrible ways. In order not to ruin the few interesting parts of this film, I won't explain how they die.

In the end of the movie, Lucas is the only one who is still alive. We see a set of flashbacks that indicate Lucas isn't who we thought he was. We see his past and the tragedy that was his childhood with a horrible mother. And we realize that Lucas is a severely disturbed individual.

Now, to the things I hated about this film:

1. It was predictable. Even though there was a lame attempt to blame the murders on Naomi, that wasn't kept up long enough to actually make the viewer believe she was the killer. That left only 2 people who could've been it. Having seen how Lucas talked to Chloe and treated her off and on throughout the film, no one should've been surprised to figure out what was really happening.

2. The puzzles were even more obscure than most escape room puzzles tend to be. A person watching the movie would've probably enjoyed the opportunity to try to figure out some of these alongside the people in the film. However, the puzzles were just dumb, in general, with little to no interesting riddles that made any sense. Of course, given what the plot is, this isn't a huge surprise since the show itself was weak with little to nothing interesting or that made sense. Puzzles in the show should've been interesting. I do understand it's based on a book that I've not read personally. I can't say if the puzzles in the book were as bad as the ones on the screen.

3. There are glaring inconsistencies in the movie that show sloppy film making. In one scene, you can see a "dead" person's hands moving slightly. In another, you will probably wonder how one person got a jacket on when they didn't have one before. It's things like this that stand out. They shouldn't...the movie should be so good that you aren't focused on these types of things.

4. The story is supposed to end in an ambiguous way that makes you question if all of it has really happened, or if it's all in one person's head. This could've worked if we (as viewers) ever saw who the other players supposedly were (in relation to the mentally ill person). We don't. The police show up at the end and if it was all in one person's head (not really occurring), it makes little sense for the police to show up in a situation that hasn't really occurred. Is it an elaborate daydream? Who knows. And furthermore, who really cares? It's not that good of a movie that you feel like you would. The film maker isn't David Lynch. He's not Stanley Kubrick. He isn't capable of pulling off the finesse it takes to make a psychological horror story trippy enough to interest the viewer and make them question.

5. HOW did the person who set all of this up..have the MONEY to do it? This is some elaborate stuff for a person who has no cash (and apparently works at a liquor store). They even have the ability to set up an entire techno rave.

6. Mental health disorders (like the ones shown in the movie) don't happen like that. It shows a lack of insight and research for a writer to put out this type of pedantic garbage that's obviously incorrect. It's possible to write really good psychological horror where the mental health disorders are more believable and (therefore) relatable to the reader/viewer. This was the typical type of thing you've seen before in movies. You won't really be surprised at the "twist" ending.

The best part of this film, though? It was free. Even then, I think I'd like the hour+ of my life back that I wasted watching this.

I don't recommend it. You can find something better to watch.
2 people found this helpful

HolyReviewed in the United States on May 23, 2022
3.0 out of 5 stars
SAFE: no spoilers in this review
Verified purchase
So, I just finished watching this movie Play or Die...

I went into this movie excited to watch a new horror movie that was kind of like the more popular "Escape Room" series...Play or Die had a good overall story-line, good acting, good quality, good special effects, and was not a boring movie in any way...

It is the director and post-production which ruined it for me... The edits were bad, scenes did not fit with each other and left me scratching my head, music did not fit and were not mixed well with the movies audio... There were some other things too but you get the picture...

Is it worth the 90 minutes to watch?
If you need to go shopping or take a shower or even need to do some laundry, I would not change any plans, it is ok to view this movie another day...
However, if you have nothing better to do for 90 minutes then this movie is better than watching re-runs or the news on tv...
One person found this helpful

Dr Shoe!Reviewed in the United States on November 14, 2021
1.0 out of 5 stars
Truly Horrible, Amazingly Stupid!
Verified purchase
Truly Horrible, Amazingly Stupid, that's how I would describe this piece of absolute garbage! It's amazing to me the amount of truly awful films that are on Amazon Prime. This film is another example of just how low the movie industry has sank and how much lower Amazon is ready to go to keep it's Coffers of Terrible movies full! I'm not going to waste any more of my time with this one.
4 people found this helpful

S. M. BardenReviewed in the United States on October 20, 2021
2.0 out of 5 stars
What in the heck did I just watch?
Verified purchase
Starts off as an interesting thriller, and then...

Basically this is a zero budget student movie that makes no sense. I'll give it two stars anyway because some of the sets are pretty cool, and there are a couple of visually interesting scenes.

But beyond that - yikes. 🙄👎
One person found this helpful

KalechipReviewed in the United States on August 5, 2020
4.0 out of 5 stars
Better than expected
Verified purchase
I didn't really have high hopes for this one to start with, but ended up liking it well enough. It has an interesting enough story line, your general escape room is actually trying to maim/kill you, some yucky gore, and a nice soundtrack. I didn't particularly care for the characters except our male lead, Lucas. Though I may have to watch this one again later to really pick up on all the stuff I more or less missed since I was multi tasking while watching, I'd still recommend giving it a watch at least once.
2 people found this helpful

SHELENA M.Reviewed in the United States on February 16, 2020
4.0 out of 5 stars
If you like Horror / suspense movies where people play games - take a look
Verified purchase
I like suspense or horror movies where people play games. I like mysteries. I also like whodunits that surprise you. This combines elements of all those things. While not original by any means, it scratched those itches for me with far better acting than any "B" horror film. If you like smaller, good suspense movies this might be for you.
3 people found this helpful
See all reviews
Back to top
Get to Know Us
Make Money with Us
Amazon Payment Products
Let Us Help You
EnglishChoose a language for shopping. United StatesChoose a country/region for shopping.
© 1996-2022, Amazon.com, Inc. or its affiliates