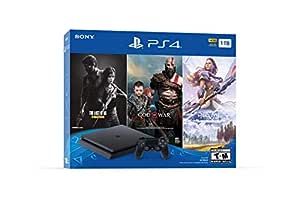 Share
Sell yours for a Gift Card
We'll buy it for up to $130.42
Learn More
Trade in now
Have one to sell? Sell on Amazon

4.6 out of 5 stars
4.6 out of 5
3,202 customer ratings
How does Amazon calculate star ratings?
Amazon calculates a product’s star ratings based on a machine learned model instead of a raw data average. The model takes into account factors including the age of a rating, whether the ratings are from verified purchasers, and factors that establish reviewer trustworthiness.

tmac8622
5.0 out of 5 stars Great Deal!
Reviewed in the United States on November 26, 2019
Verified Purchase
Not so much a review as I just wanted to post some photos. This is a fantastic deal, hopefully you were quick enough to snag one here or at another retailer. Of note is that the 2 download game vouchers are stated to expire 03/31/20. (The Last of Us is a physical disc.) Enjoy!
Read more

Aisha
5.0 out of 5 stars Dont download everything at once
Reviewed in the United States on November 28, 2019
Verified Purchase
I downloaded the Horizon complete edition and the God of war game at the same time with good internet connection, which caused the PS4 to freeze up. so um dont do that.

Came back next morning and it finished downloading so its good now. I love it so far!!

Great graphics, the controller has awesome feedback, no lag.

Repairman Jack
5.0 out of 5 stars I like turtles.
Reviewed in the United States on November 30, 2019
Verified Purchase
I don't know what you can say about a machine that's been on the market for several years, that hasn't been said. The console seems to work fine. Set up was easy, so was connecting it to the web. The games as has been pointed out, are two vouchers, and one actual disc for The Last of Us. The controller works great, and feels good, but the battery life is awful. I could get a couple weeks of casual play out of a Xbone controller, with Enloops. The PS4 controller wanted a recharge after about 2 hours of use.

Good machine that I am happy with overall.

Wubba lubba dub dub
4.0 out of 5 stars excellent deal, but...
Reviewed in the United States on November 28, 2019
Verified Purchase
value is well worth it, but PS4 packaging itself, not the amazon box was damaged. The PS4 nearly fell out as I was opening it since I didn't realize it was broken. Aside from that little mix up, great console.
Read more
43 people found this helpful
Helpful
Comment Report abuse

Louis Taylor
5.0 out of 5 stars fast delivery!
Reviewed in the United States on November 27, 2019
Verified Purchase
It's a PS4 nothing too exciting about that but, it arrived 2 days earlier then expected. nice.
Read more
41 people found this helpful
Helpful
Comment Report abuse

Chicagoon
TOP 1000 REVIEWERVINE VOICE
5.0 out of 5 stars Great bundle
Reviewed in the United States on January 6, 2020
Verified Purchase
The "Only On Playstation" bundle is great. I always wait until the end of a console generation when there's a big Black Friday sale, and then I catch up on all the great games I missed. This is a really nice bundle for exactly that.

-PS4 Slim 1TB. Has a huge hard drive so you can install many games and apps. I do have to note that the PS4 menu is complete garbage, and makes you feel like you're using a cheap DVD player from the 90s. The menus constantly refresh and shift around, or even black the screen. Why does every live wallpaper cause the console to stutter? It's a terrible user experience. But once you get into the games, those hassles mostly disappear. Since the games themselves are mostly unaffected, I won't take off too harshly for this. The "rest mode" allows the console to stay awake for updates and charging the controllers, and is a welcome addition. I try to avoid the system menu and just stay in my games.

-Cables. Has power, HDMI, and a USB cable for charging the controller. That's right, no jamming AAs into the controller all the time. Excellent.

-Horizon Zero Dawn. A story-driven, single-player game in the vein of Assassin's Creed. Wander a far-future wasteland where dinosaur-like machines threaten humanity. Shooting at dinosaur robots with a bow and arrow is a supremely cool concept for a game, and the story is quite good too.

-God of War. Another story-driven, single-player game. God of War Kratos has settled down and had a son, but the evils of the world pressure Kratos to return to action. Haven't played this yet, but I hear it's amazing.

-The Last of Us. Hey look another story-driven, single-player game. This is the game I know the least about, but everyone says it's a tremendous story about zombie survival. Sounds great.

The Black Friday deal on this was one of the all-time great deals in gaming. A great console, with a huge hard drive to download games, and 3 highly rated pack-ins. That's tremendous. The only real downside is that the PS4 menu makes you feel like you're playing a $20 DVD player instead of a console that costs 10x that much. But once you launch a game, that worry is gone, and you will get lost for long stretches in these story-driven games.
Read more
33 people found this helpful
Helpful
Comment Report abuse

Sean X.
5.0 out of 5 stars Nice deal
Reviewed in the United States on November 26, 2019
Verified Purchase
It worth the money
Read more
33 people found this helpful
Helpful
Comment Report abuse

Arnab Banerjee
5.0 out of 5 stars I love it...
Reviewed in Canada on March 4, 2020
Verified Purchase
Love it. There was three games that came with it. Out of them God of War and Horizon had just codes to be redeemed and Last of Us was on a disk. But I love the console and the whole experience.
Read more
2 people found this helpful
Helpful
Sending feedback...
Thank you for your feedback.
Sorry, we failed to record your vote. Please try again
Report abuse

Lee Murdoch
5.0 out of 5 stars As advertised.
Reviewed in Canada on January 19, 2020
Verified Purchase
It works.
Read more
Helpful
Sending feedback...
Thank you for your feedback.
Sorry, we failed to record your vote. Please try again
Report abuse