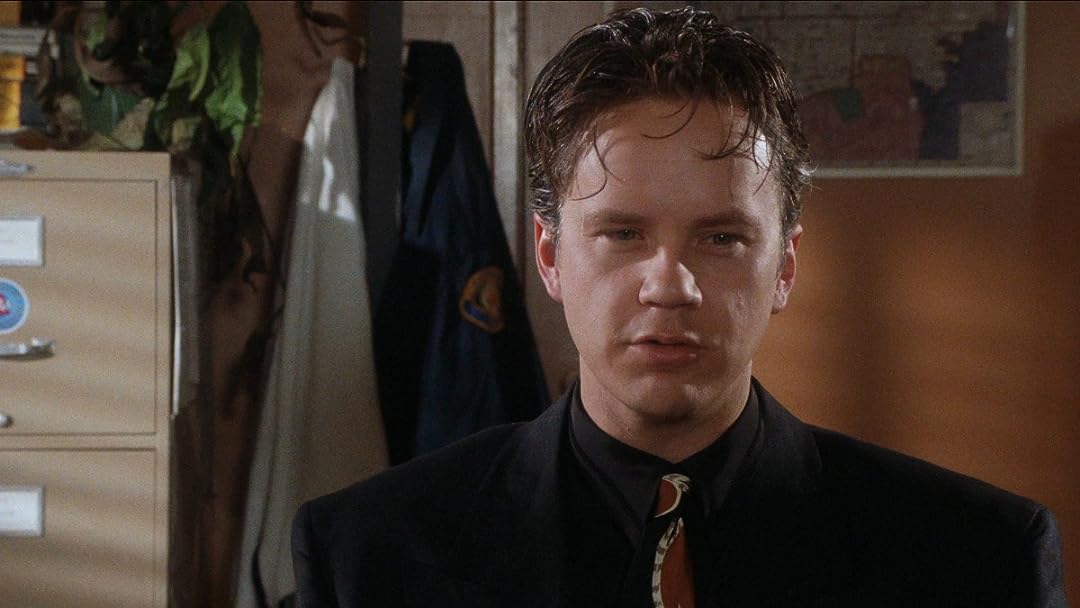 (557)
7.52 h 4 min1992R
A Hollywood studio executive with a shaky moral compass (Tim Robbins) finds himself caught up in a criminal situation that would be right at home in one of his movie projects, in this biting industry satire from Robert Altman.

EmilyReviewed in the United States on July 28, 2021
5.0 out of 5 stars
If you're not a Hollywood insider, watch it twice - first ignorant, then after reading analysis
Verified purchase
I have absolutely nothing to do with Hollywood. Not connected to the industry at all. But I do understand self-indulgence .... boy, this movie was made by Hollywood for everyone who knows Hollywood.
I really like Tim Robbins, but didn't fully appreciate this movie first time I watched it. Sure, there's a lot of meta-meta stuff in it that you'll get just for being somewhat intelligent, but you won't appreciate all of it.

Then, after I watched it, I read some of the analysis that helped me get some of the "in-jokes" - and then went to watch parts of it again.
It's much more fun when you get the in jokes.

Look, lots of cultures have their in-culture stuff. I know tech, so I probably appreciated stuff like 'the social network" more than people who don't know tech. It's ok to not be in on every culture and subculture out there.

My main point is that I first watched this movie because I like Tim Robbins and hadn't see this. Then I read up on some of the history and in-stuff and satire involved. And then I went back and watched parts of it again (or at least replayed parts of it in my head to see them from a different angle) and it was so much more fun. I recommend you do it in that same order. There's a joy in being able to see things that were invisible to you the first time you looked.

Films4LifeReviewed in the United States on May 28, 2016
5.0 out of 5 stars
The best film ever made about the film industry
Verified purchase
Robert Altman`s masterpiece The Player is a terrifically entertaining inside look at Hollywood and its agents pre Entourage ( that even features Jeremy Piven in a small role ironically) That gets better and better with repeat viewings. Its filled to the brim with a fantastic cast and countless cameos. Tim Robbins gives his best performance as a creep Hollywood agent who gets involved with a murder
that we actually end up rooting for even though he`s a villain through the entire movie. Everyone else is great as well especially Whoopi Goldberg as a
hilarious detective. This is one of those movies inside of a movie inside of a movie. Some might find it dated due to being 1992 Hollywood but I also think
that anyone can admit that 1992 Hollywood was much better than Hollywood today. The Player`s script is fantastic and features one of my favorite scenes in film history when Tim Robbins gives his speech about the industry and the importance of great films at the awards show. If you`re a true film lover you will love The Player.
14 people found this helpful

Delta D.Reviewed in the United States on October 20, 2020
4.0 out of 5 stars
5* film held back by a 2* element
Verified purchase
The ultimate in Hollywood self-indulgence. There are other Hollywood movies about Hollywood movie-making - Sunset Boulevard, Inside Daisy Clover and The Oscar spring immediately to mind - but this indulges itself so much more than those.

Almost everything is 5*. The opening scene is an uncut 8 minute synopsis of the chaos of a movie studio, which makes specific reference to lengthy uncut scenes from other movies. The plot development, including the pitch and final production of a meta-movie, is first rate. The meta-movie writers insist on no stars and a tragic ending. When produced the meta-movie has Bruce Willis saving Julia Roberts's life at the very last second.

The plot in the The Player plays out similarly.

The only factor holding me back from a 5* rating is the relationship between Tim Robbins and Greta Scacchi. Right from the first encounter, when she reveals extraordinary information over the telephone to a complete stranger through the romantic development, it lacks all credibility. The Panglossian conclusion is conspicuously ironic, but it would have sat so much better if the relationship development in the early stages had been more credible.

Mike MihaljevichReviewed in the United States on January 2, 2020
5.0 out of 5 stars
A Killer of a Story
Verified purchase
Great plot, creative as hell, realistic also, Tim Robbins wonderful. The female actress whose name i forget and am too lazy to retrieve, is sexy as hell. It is a story with a story, so to speak. And about Hollyweird productions and how scripts are re-written to assure they achieve popular reviews by critics who know how to please the producers in a mutual case of masturbatory pleasuring. Fifth time I have watched it.
3 people found this helpful

tarynReviewed in the United States on March 1, 2020
4.0 out of 5 stars
very interestingly honest picture
Verified purchase
This movie was super realistic and a tad sadistic and a pinch boring. but I think the boring parts are what made it realistic so I'm not complaining. I heard about this movie form the Safdie brother movie collection on youtube. I'm glad I watched it. It's really different from any movie I've ever seen, especially different from most crime movies I've ever seen. The ending was quite sickening to a person who has the capability to process empathy. Truly a great film though, I actually liked watching it very much and I was curious throughout the entire film what the ending would end up like. That's apart of what makes a great movie Great.
One person found this helpful

Joseph WhiteReviewed in the United States on March 13, 2014
5.0 out of 5 stars
Only deal with those who can say "Yes!"
Verified purchase
Very enjoyable to watch the countless cameos of so many Hollywood greats. . It reminded me of life in “the regular corporate world.”……..when you are dealing with senior level people who only have the power to say “No” to your proposal (of any kind) and they never have the power to say “Yes.”....avoid them! As in the Hollywood film, I have found those corporate players not the least bit interested in the growth of their companies (no matter what they say publicly) but only interested in covering their asses, protecting their powerless positions….totally devoid of any risk taking……”corporate wussies,” perhaps. In the world of achievement only speak to Economic Buyers (those who can say yes)…eh?

This movie will make you think about all those people in your career life who don't have the power to say "Yes!"......HR people....technical people....middle managers, I think you get the picture.
4 people found this helpful

Katie O'HaraReviewed in the United States on May 25, 2021
5.0 out of 5 stars
Great ensemble take on Hollywood
Verified purchase
The Player is one of my absolute favorites. Simultaneously a comedy, thriller, and social commentary, plus a ton of celebrity cameos. Hollywood is skewered very well, but you still root for the happy ending despite being told how contrived they are. Great acting, and a great script.

Michael EdelsteinReviewed in the United States on May 28, 2013
5.0 out of 5 stars
Altman's The Player: A Profound Influence
Verified purchase
I can sincerely endorse and recommend "The Player." The rudeness and egotism, the closed society that only leads to success, not if your talented but if you know the right people. This is material Altman knows from the inside and the outside. He owned Hollywood in the 1970s, when his films like M*A*S*H," "McCabe and Mrs. Miller" and "Nashville" were the most audacious work in town. Hollywood cast Altman into the outer darkness in the 1980s, when his eclectic vision didn't fit with movies made by marketing studies. He came back with "The Player" that is not simply about Hollywood, but about the way we live now, in which the top executives of many industries are cut off from the real work of their employees, and exist in a rarefied atmosphere of greedy competition with one another.

"The Player" opens with a very long continuous shot that is quite a technical achievement, yes, but also works in another way, to summarize Hollywood's state of mind in the early 1990s. Many names and periods are evoked: Silent pictures, foreign films, the great directors of the past. But these names are like the names of saints who no longer seem to have the power to perform miracles. The new gods are like Griffin Mill -- sleek, expensively dressed, noncommittal, protecting their backsides. Their careers are a study in crisis control. If they do nothing wrong, they can hardly be fired just because they never do anything right.
5 people found this helpful
See all reviews
Back to top
Get to Know Us
Make Money with Us
Amazon Payment Products
Let Us Help You
EnglishChoose a language for shopping. United StatesChoose a country/region for shopping.
© 1996-2021, Amazon.com, Inc. or its affiliates