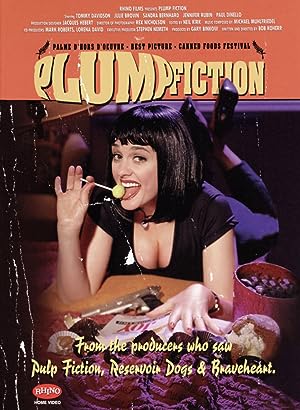 Jane effReviewed in the United States on September 6, 2018
5.0 out of 5 stars
Great movie
Verified purchase
Great movie and came in excellent condition.

Maniac1075Reviewed in the United States on December 19, 2007
2.0 out of 5 stars
plump failure
I love parody movies, even some of the bad ones that get slammed with 1 star reviews I have found some things about them that I like. This one I should have listened to the majority of reviews for, but for the cheapo price it was, I took a gamble with my fingers crossed in hopes it was something better then what it was being acclaimed as.

Like I said, I love parody movies, but this one fails big time to hit the mark on what "parody" stands for. It attempts to parody Pulp Fiction, Reservoir Dogs, Sister Act, Forrest Gump and Nell... but yet, fails to find a comedic approach to it.

It's more like an un-funny "mock" movie then a parody. Making out the pulp fiction characters (travolta and Jackson) as hitmen disguised as rodent killers who accidentally walk in on the reservoir dog characters which leads to killing a woman who has sent Forrest gump of with a script thats needed who ends up falling in love Nell might have sounded decent on paper, but it fails on screen with no comedy to it.

Some parts of this I thought where a decent idea, but there more the kind of things you notice in parody movies that you think it's not laugh out loud comedy, but it makes you smile, where as this movie, those smiles are the highest jokes in this thing.

There is nothing funny about Sister Act style nuns with guns and the parody attempt of Uma Thurman's Pulp Fiction character being a fat food junkie had a chance to be funny, but only succeeded in one scene where you think she is buying drugs and turns out shes buying chocolate and ends up having a diabetes like attack cause she needs the sugar and ends up being stuck with a needle...you know what scene its mocking in Pulp Fiction and thats about the only thing that did make me laugh a little in this whole thing.

The thing I found the funniest about this whole movie is a bonus feature... it was an interview with Julie Brown who plays Mimi Hungry (Uma Thurmans parody) who was being asked in an interview what makes a good parody movie... i turned it off right then laughing as I thought, "After seeing this movie, I know whatever she says is WRONG!

The other funny thing is it has a commentary track from the producer... I didn't listen to it, but it's funny that there is one on this god awful attempt to parody movies. If he is pointing out how good he thinks the movie is and explaining how something came to be, then he must be completely delusional. He must have written the episodes for Drew Cary that bombed, cause they never kept him on as a writer and after seeing this film, I can see why.

The only reason I finally gave into this is cause I liked some of Julie Browns songs in the 80's, but she does not bring any comedy as the leading role in this film. Not even Dan Castellaneta (Homer Simpson) brung anything to this film.

However, I can say some positives about this movie which I give it the 2 star rating for instead of 1.
- It had a couple of decent scenes. Not enough, but it has SOME.
- It's a hell of a lot better then "Epic Movie" or "Fatal Instinct" so it's not the worst parody attempt ever.
- Julie Brown is always a good perv.
- And you have to laugh that they added a commentary track to a movie no one wants to see, let alone will ever hear the commentary track.

so, on that note, if you love parody movies and you feel you HAVE to see this before you die, well, check it out. Other wise, you will not need to regret having never seen this thing... it's not the worst Parody movie of all time, but it's still down pretty low.

Alika SerratoReviewed in the United States on May 16, 2000
5.0 out of 5 stars
For people who DON'T need assistance in understanding humor
It seems rather painfully obvious that some people have had problems understanding the humor in this film. Maybe some people are not aware of what a parody is. For those of you who DO and enjoyed Plump Fiction, Nell, Forest Gump, Natural Born Killers, etc. you will definately be in for a great time. Julie Brown is sensational portraying Uma Thurman and accidentally overdosing on roach poison. I found the pardoy on Nell to be painfully hilarious. The people who slagged this film should not be judged harshly for their lack of humor and common sence but rather pitied and felt sorry for, especially the poor fellow who suggested the movie get zero stars. Now how proud do you think he was of himself for taking the time out to make sure SOMEBODY did't bother watching this film.
I suggest you look at all the reviews and see that the MAJORITY of us indeed loved it and it is certainly worth a glimpse.
16 people found this helpful

V. RijkborstReviewed in the United States on July 31, 2001
1.0 out of 5 stars
People who find this fun, must have had lobotomies
First of all, let me start by saying that I love parodies, if executed well. I loved Airplane and the Naked Gun-series. This is however so stupid !!
I have seen better parody at elementary school, which was also less childish. The only funny thing of this movie is the guy imitating Christopher Walken, who is quite hilarious. Ms. Brown is one of the most obnoxious, untalented and hysterical persons ever to have walked this earth.
DO NOT BUY THIS MOVIE !!!
11 people found this helpful

Perini SclerosoReviewed in the United States on December 26, 2007
4.0 out of 5 stars
Worth watching if you're a fan, otherwise....
Funny, entertaining, but basically a sketch, not a movie. If you're a Paul Dinello fan, you gotta see it. If you don't know the comics already, you may be a little non plussed. Download it, it's worth a few bucks. :-)
5 people found this helpful

A. LupienReviewed in the United States on July 18, 2009
5.0 out of 5 stars
SpoofYah!!!
If you apreciate spoof movies this is a forgotten gem.
It covers Pulp Fiction , Natural Born Killers , Reservoir Dogs as mains, with a lil Forrest Gump and a side of Nell....the one liners are great.
Also another less heard of spoof movie is Silence of the Hamms, with Dom DeLouise playing Hannibal Leckter, I've yet to find a dvd version of that one, really happy to find Plump on dvd,only had it on vhs.....THANK YOU AMAZON !!!!!!!
2 people found this helpful

Mats NilssonReviewed in the United States on January 15, 2001
1.0 out of 5 stars
Worst ever!
This is by far the worst movie i have ever seen. Its been a few years since I saw it and nothing has come close since then and i doubt that there ever will be a movie produced that is as bad as this. It tries to make fun of a variety of different movies, for example 'Nell' (!) and instead of funny its just pathetic. Whatever you do, don't rent or buy this garbage and if someone throws it at you....turn around and run the other way!! I'm a huge Pulp Fiction fan by the way and have watched that movie a couple of times. Still waiting for the Pulp Fiction special edition DVD to come out.
6 people found this helpful
See all reviews
Back to top
Get to Know Us
Make Money with Us
Amazon Payment Products
Let Us Help You
EnglishChoose a language for shopping. United StatesChoose a country/region for shopping.
© 1996-2022, Amazon.com, Inc. or its affiliates