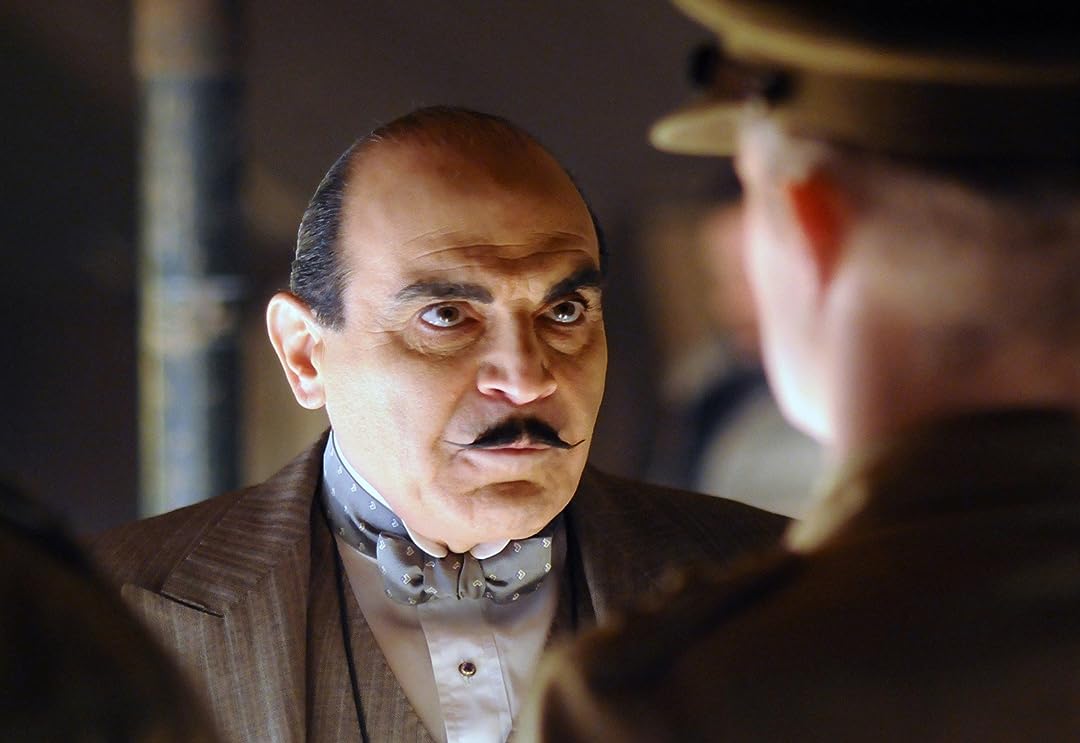 (512)
8.61991NR
David Suchet stars as the dapper, diminutive Belgian who solves the most serpentine cases with the sharpest of minds and the driest of wits.

Tom I.Reviewed in the United States on April 14, 2013
5.0 out of 5 stars
11 Poirot Mysteries That Will Surely Entertain
Verified purchase
I have been a Poirot fan ever since the programs were first televised here during the early 90s. David Suchet is to Poirot, what Rathbone is to Sherlock Holmes. His potrayal of Poirot is one of a kind, from his crime solving, his dress, his speech, and ultimately his mustache. I recently purchased the Blu-ray "Early Cases Collection" consisting of Series 1-6 containing 47 stories. The quality of the discs is exellent. However, if Blu-ray is a little pricey, I'd recommend the SD version as well. Poirot's "gray cells" do their usual amazing job of ferreting out the culprits, with often surprising results. One factor I overlooked the first time I viewed the series is the utter distain with which the British elite are portrayed. They're clearly presented as foppish, equalitarians in a class based society that existed until at least the late 40s. It is also interesting to see how this permeated down through the classes. The elites were above all, often distaining one another in their own little world. The educated workers were above the servants, who were above the trades people, and so on. This is also reflected in the educated or uneducated manner the people in the various classes speak. A few examples include how the elites take absolutely no notice of the people who are serving them. Another is Miss Lemon's shock at finding that a potential suiter had lied to her about his position and that he was just a "man servant". When he apologized, her disappointed response was that "This is the way we were raised to believe". A few more on the funny side, in the Series 6 "Hickory, Dickory, Dock" episode are Chief Inspector Japp's introduction to Poirot's bidet, and to his cooking. These were hilarious. But at the same time, they show Japps ignorance of upper class living. Putting the cultural issues aside, the Hercule Poirot series are well worth buying, of if you're an Amazon Prime member, you can presently watch Series 1-6 for free.
10 people found this helpful

Freda PongettiReviewed in the United States on June 13, 2014
5.0 out of 5 stars
David Suchet is Awesome
Verified purchase
In Series 3, Poirot is still fun to watch. The stories in this early series are not as dark and gloomy as are the later series stories. Poirot is an engaging character, thanks to David Suchet who brings to Poirot a sophisticated, sensitive, intelligent personality. The supporting cast is also excellent. The relationships between Poirot, Hastings, Japp and Miss Lemon are mature and enjoyable. The scenery breathtaking, beautiful and immaculate. There is humor and intrigue, pure enjoyable escape.
4 people found this helpful

Joan Dee SizemoreReviewed in the United States on March 11, 2015
5.0 out of 5 stars
Great Mystery!
Verified purchase
Loved this film! We saw "The Mysterious Affair at Styles" and loved it. I had recently read the book and this film closely follows the story. The acting is well done, especially David Suchet. We loved the period costumes, sets, cars and atmosphere. My friend who watched it with us didn't guess the real killer until the end (unlike Poirot!) We intend to watch the rest of the series.
3 people found this helpful

Western ShadowsReviewed in the United States on June 23, 2013
5.0 out of 5 stars
Entertaining and winsome little Belgian
Verified purchase
Poirot is very entertaining, from the intrigue of each mystery to the quirks of the little Belgian detective. Suchet plays the part masterfully and endears the character to viewers. His compassion are communicated as well as his desire for justice, and his perception of evil and human nature don't get twisted while "the little gray cells" wrangle the facts into submission. Not many endings were predictable. Minimal violence to the eyes.
4 people found this helpful

Elaine GowderReviewed in the United States on December 2, 2013
4.0 out of 5 stars
Agatha Christi's Poirot
Verified purchase
First, I love Agatha Christi. She is a writer for people who loves mysteries. Secondly, David Suchet is brilliant a Poirot. I have seen earlier versions with other actors. Mr. Suchet is the best. Third, the British did an excellent job of filming the series. I have seen many of the episodes on PBS an loved watching them more than once. All Christi fans will enjoy these programs.
2 people found this helpful

Stephen Manning IIIReviewed in the United States on February 10, 2013
5.0 out of 5 stars
Consistently EXCELLENT
Verified purchase
Having lived in England for many years, I first saw these dramas there. British TV production values are always good, but here the ambience, period credibility and particularly the acting are exceptional. These scripts are well written and directed, and features many of Britain's most renowned and respected actors. There is very little violence or blood and gore, a welcome contrast to many US TV crime dramas. If you like Sherlock Holmes, you'll like this and other Poirot series
2 people found this helpful

F. Gail PothReviewed in the United States on September 8, 2013
5.0 out of 5 stars
Mystery Classic
Verified purchase
Any Poirot is a classic. Watched this series when it was on PBS, now I can watch it any time I want to, thank you Amazon Prime. Perot is what ever Agatha Christie reader loves, trying to figure out "who done it" but nobody does it better than the Belgian, Perot and David Suchet as Peirot is super. Have never come up with the correct killer, don't have Poirot's skills. Watch and enjoy, the Poirot series is truly enjoyable.
2 people found this helpful

LeighReviewed in the United States on September 13, 2013
5.0 out of 5 stars
LOVE POIROT!!
Verified purchase
We love all the episodes, watch them over & over. We own one box collections.
The historic buildings & locations, interior decor, vintage clothing & automobiles.
The story lines & plots are intriguing, delightful humor and always a twist & surprise endings.
Last, but certainly not least, the characters are superb actors, especially David Suchet;
his facial expressions speak volumes. Very well done. We actually prefer British TV over
American. We're also Sherlock Holmes fans; own the entire collection, and a book containing
all the writings.