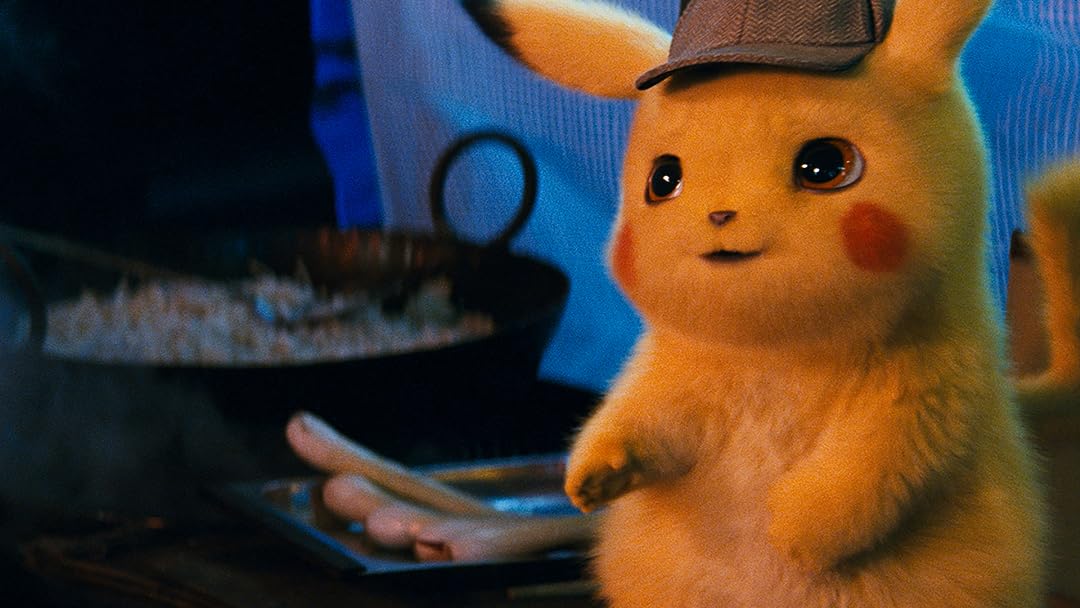 (44,045)
6.51 h 44 min2019X-RayPG
When an ace detective goes missing, his son teams up with a hilariously wise-cracking Pokémon - Detective Pikachu (Ryan Reynolds) - to help solve the mystery of what happened.

RyanReviewed in the United States on May 14, 2019
5.0 out of 5 stars
Detective Pikachu is a labor of love for Pokemon fans
Movie review 5/13/2019 (I will update this when I get the physical copy, reviewing the run of the copy itself including packaging and encoding)

I went in with low expectations (video game movies haven't exactly set the bar high) but I can say I pleasantly enjoyed the movie as a huge Pokemon fan. You either like it or you don't - but that's ok. I want to stress the importance and say rent this before buying a copy. I saw this opening weekend and I would say it was worth the money.

Pros:
- The in-universe world of Rhyme City and its surrounding wilderness look absolutely stunning and Pokemon look beautiful in this art style. It's an acquired taste, despite some of the more creepy creatures.
- Ryan Reynold's role as Detective Pikachu is almost a good enough reason to see it alone. The jokes tiptoe the line of what is acceptable in a PG rated film, and has many things adults would get a good chuckle out of.
- Tim Goodman (played by Justice Smith) is a bit of a more relatable character if you've worked a dead-end job. I like his more dead-pan feel.
- Certain heartwarming moments may have you choked up

- Pacing is just a LIITLE bit too fast, but its a children's movie at heart. It could benefit from 20 to 40 minutes more run time (coming in at 1hr 40m or so.)
- The reporter character is kind of one dimensional and is a shoehorned love interest that never really goes anywhere. She would be better off without the romantic tension.

All in all, it is still worth seeing it in theatre, then buying the Blu-ray so you can go through all the fine details with the frame by frame inevitable YouTube analysis videos.

DisneyDenizenReviewed in the United States on August 6, 2019
5.0 out of 5 stars
WHAT'S ON THE DVDs
Verified purchase
Here's what's on the 2 DVDs:
- the movie
- alternate opening
- My Pokemon Adventure
- Creating the World of Detective Pikachu Featurettes
- Mr. Mime's Audio Commentary
- Ryan Reynold's - Outside the Actor's Studio
- Music Video "Carry On"
- Detective Mode
78 people found this helpful

Citrus x ParadisiReviewed in the United States on July 30, 2019
4.0 out of 5 stars
Pikachu Noir with live action, probably better for older fans
Verified purchase
It's a fresh take on Pokémon movies in a film noir style, but is probably not appropriate for the really young or sensitive kiddos. Thematically, it's much more complex than most Pokémon movies, dealing with issues of intra-familial connections and personal growth. Also, tone of the movie is darker than most Pokémon media, and the ending doesn't wrap itself with a bow and easily determinable moral.

The visuals are gorgeous, though. If you've ever wondered what a Blade Runner would look like in a Pokémon world, here you go. Whether at home, out and about in the city, or in nature, the Pokémon fit in nicely to create a believable AU.

Meta: My biggest quibble is with Ryan Reynolds as Pikachu. It's not his voice acting per se, but some of the humor was more mature in tone and I kept waiting for him to bring it into the Deadpool zone. Obviously this doesn't happen, but if you plan a Deadpool/Detective Pikachu double feature, you might have the same issue.

All in all, it's enjoyable but the themes and tone are best for a slightly older audience; One which still enjoys Pokémon.
41 people found this helpful

I had no idea when I purchased this item that it came with a detective Pikachu card inside, I just bought it because I loved the movie and wanted to own it. When I opened my amazon box to behold the cover of the blu ray showing a sticker saying there was a pokemon inside I was so excited. I hadn't expected it but suddenly it was Christmas. I took off the plastic wrap eagerly waiting for my Pokemon card. I opened the box....and there was nothing inside but the two discs. I spent five whole minutes shaking the box desperately, I even picked up the discs and looked under them to be absolutely sure I wasn't missing a hiding spot. I was broken. It was a normal day, a good day, I was at first simply satisfied to have my movie until that sticker led me on and got my hopes up only to send them crashing to pieces.

I can only reason that Jeff Bezos stole my Pokemon card and I will never forgive him.

Overall though a great product and a really great movie thats fun and cute that you'll love if you love pokemon but beware- the sticker is a lie, Jeff Bezos might have snatched your trading card.

-1 star for the stolen card.

CAINReviewed in the United States on July 27, 2019
4.0 out of 5 stars
Love it but
Verified purchase
Love the movie but I can’t hear the bonus feature at the end of the movie
34 people found this helpful

ShawnReviewed in the United States on July 25, 2019
5.0 out of 5 stars
Adorable little Pokemon in this movie
Verified purchase
We really enjoyed this movie as a family. We also play Pokemon go as a family so this movie
is one that everyone enjoyed watching. All the Pokemon are just to adorable.
22 people found this helpful

S. PryorReviewed in the United States on May 15, 2019
5.0 out of 5 stars
Easily the best live-action video game/anime adaptation yet.
As a longtime Pokémon fan and a film enthusiast, this film always intrigued me when I first heard about it; especially given the rocky track record both mediums have had (Super Mario Bros., anyone? How about Dragonball Evolution?), but I can definitely say that as the first entry into a proposed shared "cinematic universe" based on the series, this not only fulfills my lofty expectations; but easily has made the best live-action adaptation of a popular anime and video game franchise yet. Rather than trying to cram roughly 23 years of video game lore and roughly 1,000 episodes of TV into a single movie; director Rob Letterman and a group of screenwriters use subtle nods to previous entries in the series in a family-friendly sort of "neo-noir" based on the 2016 spinoff title "Detective Pikachu" on 3DS. Though the script does take some creative liberties with said 3DS title, the basic plot remains the same: a young man named Tim Goodman (Justice Smith) has come to Ryme City to search for his father Harry, who went missing; presumed dead prior to the events of the story. Teaming up with the eponymous Detective Pikachu (voice of Ryan Reynolds), the two seek to uncover the truth about what happened while also unraveling a greater mystery that could threaten the entire Pokémon world. Though it may be easy to dismiss this as just another kiddie flick based on a video game, make no mistake: there is more than just novelty at play here; and the visual flair is nothing short of spectacular. Combining elements of European cities and a neon-lit "Far East" aesthetic, the decision to focus on world-building was a great one on the filmmakers part. By downplaying reliance on battles, this allows for all manner of creative comedic setups that are recognizable for newcomers and true believers alike. An underground battle arena known as "The Roundhouse" is a notable standout, and the film renders 54 of the 809 (and counting!) Pokémon in a manner that somehow works for the story without straying too far from what made the original designs work. The movie's tone harkens back to the earlier days of the PG rating, when it often meant that it wasn't merely "parental guidance suggested;" and more "highly recommended." The film opens on a fairly realistic car accident and people die. The film also has more realistic action and risqué jokes, yet through it all; there was very rarely a moment I wasn't laughing. In the moments I wasn't, I was invested in how the writers made this story work; and how unlike other travesties adapted from video games (such as Uwe Boll's work) and anime (like the infamous 2017 remake of Ghost in the Shell), there was a sense of wonder and care in every frame in the film's 104-minute runtime. Its tone is equal parts "Who Framed Roger Rabbit," "Blade Runner" and an overall strong first live-action film in the long-running series. Reynolds' performance as the title character draws some of the biggest laughs; electrifying what could have easily been another live-action cash-in into a family-friendly counterpart to his role in the "Deadpool" series. Whatever happens next on film with the series (a sequel is already in development from the writers of "22 Jump Street"), it's clear that the foundation has been set for a Pokémon world that's well worth exploring. Let's hope that more films in this vein can be released in the future, since American comic book superhero films also went through years of dreck to get to being really good. Whether or not the filmmakers seek to adapt existing material from the series or create their own, "Pokémon Detective Pikachu" is a highly recommended film that's "a bolt of brilliance!"
55 people found this helpful
See all reviews
Back to top
Get to Know Us
Make Money with Us
Amazon Payment Products
Let Us Help You
EnglishChoose a language for shopping. United StatesChoose a country/region for shopping.
© 1996-2022, Amazon.com, Inc. or its affiliates