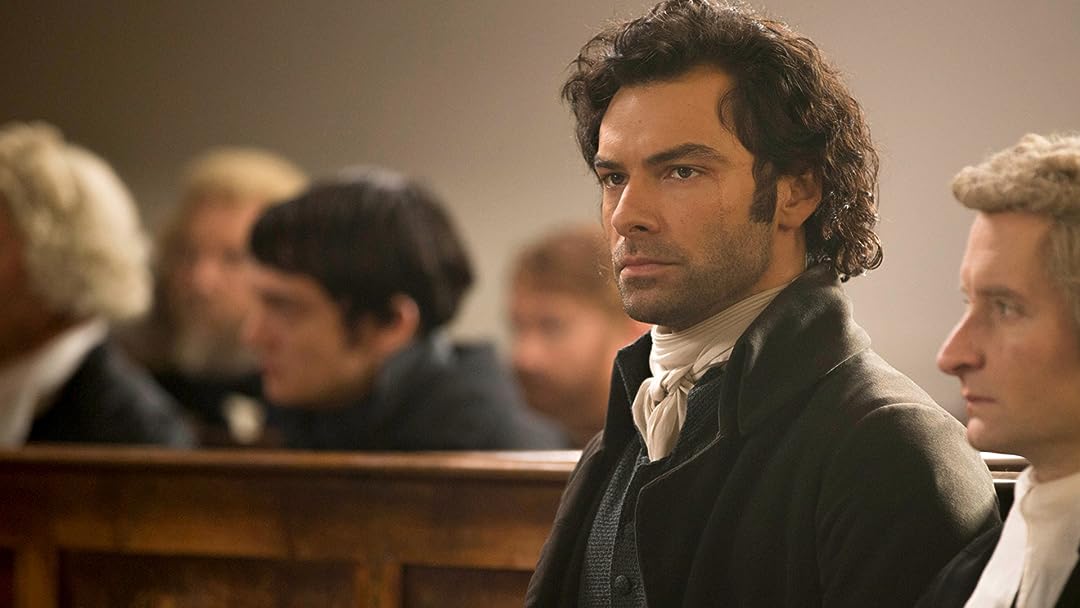 (3,584)
8.32016X-RayTV-MA
Aidan Turner stars as the courageous Cornishman in an all-new season of Poldark on MASTERPIECE.

AliceReviewed in the United States on September 26, 2016
5.0 out of 5 stars
I own the 1970's series and I loved it BUT this one is much better
Verified purchase
I read the books as a girl and have read them over and over for years. Many times considering I am 73 years of age. I own the 1970's series and I loved it BUT this one is much better, so much better. I have been anticipating this new season so much and am so hoping they carry this series further than the 1970 series went. I just finished the premiere of season 2 and I loved it. These characters are so good.. Came right to my computer and ordered the digital series and am now going to order it on DVD. I want it in every way possible. Do yourself a favor and buy season one and two and watch this season on TV as well so they will keep it going!! I AM LOVING this series. It is staying so much closer to the books and doing a fabulous job of seamlessly condensing the story lines from the book. Some changes but so far not major ones. I don't know how they will take this to the end, but there are some fantastic story lines as the books go deeper. Aging would not be a problem and some of the interesting plots could be advanced a little. I would dearly love to see Demelza's late pregnancy for instance, and love to see them with 4 children. But also Ross has so many terrific adventures, I would love to see those. Aging is not difficult in this day and age but will the actors be willing, because it would not work with new actors at all. My fingers are crossed but this is fabulous, everyone read the books and then watch the series and you will see how closely they are honoring the books which I love!!
225 people found this helpful

M. MaraReviewed in the United States on May 9, 2017
1.0 out of 5 stars
Skip Season Two!
Verified purchase
SPOILER------
Poldark went from a loyal, romantic character in season one to an absolute creep in season two. I watched 6 episodes before I was too angry and disappointed to see or care how it ends. I hope his wife left him and he went to prison. Yes, he becomes that much of a jerk! Practically cheating, at least verbally, with his first true love every episode. I thought it would turn around but when he secretly gives the last of his money to her instead of his wife who is also without funds, I was done with the season and done with the show. And watching his wife just put up with it made me angry.
65 people found this helpful

AF Feedback Because you askedReviewed in the United States on December 14, 2017
1.0 out of 5 stars
This show should have ended with Season 1
Verified purchase
I really enjoyed Season 1. I loved the story and the characters and the scenery of Cornwall. Season 2 quickly devolved into something reminding me of when I was a teen watching "Days of Our Lives". George Warleggan is merely Victor Kiriakas and Ross and Demelza and Elizabeth are just your typical love triangle. I persevered through the soap opera like plot of season 2. But then a main character rapes another and its played off as a moment of passion. So disappointed in this show and now I have to go add a caveat to my recommendation to my friends.
36 people found this helpful

Jeremy KingReviewed in the United States on August 9, 2017
2.0 out of 5 stars
Good Until S2E8
Verified purchase
Season 1 was fantastic. Season 2 is pretty good all the way up to episode 8, where the writers totally ruined the show. For most of the series he's a moral pillar of society. Then he starts smuggling and assaults an officer. Then in episode 8 he stands trial for it, perjures himself, has 3 people give false testimony, and then that night he cheats on his adorable wife. Never have I seen a show destroyed so quickly. Just quit watching after episode 7 and pretend everything works out.
56 people found this helpful

TA SparksReviewed in the United States on September 27, 2016
5.0 out of 5 stars
Here we go Season 2!
Verified purchase
Once again this production of Poldark is turning out to be AMAZING. And to the people leaving bad reviews. This review area is for THE QUALITY OF THE SHOW, not purchasing issues!! Stop leaving bad reviews for customer service issues.
91 people found this helpful

Trillium StarReviewed in the United States on October 11, 2016
5.0 out of 5 stars
Poldark: 5 Stars, sadly Amazon: 1 Star
Verified purchase
This is such a well produced adaptation of the books, I hope that they actually film the whole series which would be 6 seasons if each one covers 2 books. The story is wonderful, especially weaving in the history and culture along with the personal relationships. I'm so glad I stumbled upon it through our PBS station. In fact after the first season I hunted down the books (wasn't easy since they were only sold in the UK at the time - thank goodness for relatives) and have read all 12 of them. This series is following the books very closely and where there is a deviation, it makes sense and fits the story. Loved being with this family for such an extended period. I really look forward to the next episode which is why I have purchased the series. Like so many others am disappointed in Amazon's poor service in not supplying the current episodes in a timely manner -- not happy!!
27 people found this helpful

Anonymous CustomerReviewed in the United States on April 14, 2017
5.0 out of 5 stars
Another Masterpiece Theatre Gem but..
Verified purchase
...Damnit! I want to slap that insolent, cruel Ross Poldark silly! Hell hath no fury like a Demelza fan infuriated! He has a beautiful saint of a wife in Demelza, but of course the horny miscreant has to have his way with the gold-digging uppercrust harlot Elizabeth. Season 1: So they had a mutual adolescent crush before he went off to war! After he returned, Elizabeth could of called off the marriage to his cousin Francis but nooooo the conniving witch knew better; Francis Poldark seemed to have a better monetary foundation than poor bankrupt Ross Poldark, HOW many times is poor Demelza going to forgive this dog? How many times is Ross going to assure Demelza that he loves her and NOT Elizabeth? In season one, Demelza nurses Francis, Elizabeth and their son Geoffrey Charles when they all very ill from the deadly putrid throat, contracts it herself, she and Ross's own baby daughter Julia dies from the disease so in season two Elizabeth repays her by screwing Ross. Nice. Please die Elizabeth, just die. I do not care about the villain Warleggans, I want them to kill off Elizabeth so Ross and Delmelza can be happy! Despite my frustrations, another gem from Masterpiece Theatre. The entire cast is superb. Waiting for season 3...hopefully my blood pressure will be under control by then.
33 people found this helpful

JamesReviewed in the United States on December 4, 2016
4.0 out of 5 stars
Entertaining and visually sumptuous with romance and action. But soap opera-ish. Watch it!
Verified purchase
Compared to most of TV fare, this is fabulous. Compared to the best (like Durells in Corfu) it is fair. So I compromise and give it 4 stars. Cornwall is beautiful. The plots are engaging. The actors are good. The historical context is great escape and I never knew about mining in Cornwall and tin and copper and all that. After getting into Poldark, I got on Audible "The Map That Changed the World" about the founder of geological science, who lived in the 1700s and 1800s in England. That is interesting and informative, but Poldark is more fun. My criticism of Poldark is just that Ross and Elizabeth are such idiots, they do try my patience. I love Dimelza and George is a great villain -- the Snydley Whiplash of 18th-century Cornwall, sans mustache. If you like historical drama that verges on soap opera, with lots of attractive actors and actresses dashing about on galloping steeds against a backdrop of green pastures and boundless ocean, with the occasional torrid love scene and a sprinkling of fist fights -- go for it. See the townspeople lay siege to the manor house with their pitchforks and flaming torches! Feast your eyes on Dimelzas sumptuous red tresses tumbling all over her slender well-formed shoulders and spilling down her back and over her bosom. See hunky Ross working and sweating shirtless and tight-pantsed. Warning: There is a scene where Ross forces himself on a woman and she at first resists, he won't take no for an answer, and then she swoons and goes all-in for it. Not a good message. No means no.
10 people found this helpful
See all reviews
Back to top
Get to Know Us
Make Money with Us
Amazon Payment Products
Let Us Help You
EnglishChoose a language for shopping. United StatesChoose a country/region for shopping.
© 1996-2021, Amazon.com, Inc. or its affiliates