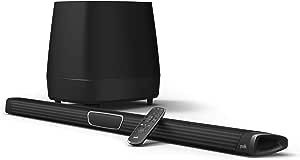 Add to Cart
$379.00
+ Free Shipping
Sold by: Electronic Express
Have one to sell? Sell on Amazon

3.9 out of 5 stars
3.9 out of 5
325 customer ratings
How does Amazon calculate star ratings?
Amazon calculates a product’s star ratings based on a machine learned model instead of a raw data average. The model takes into account factors including the age of a rating, whether the ratings are from verified purchasers, and factors that establish reviewer trustworthiness.

David K.
4.0 out of 5 stars Dead in 4 months, but no hassle replacement.
Reviewed in the United States on July 9, 2018
Style: Home Theater SystemVerified Purchase
Bought it 14 March, and it is dead on 09 July...it just keeps rebooting itself and will not play sound from any source, I tried optical, HDMI, and Bluetooth. Really thought it was a nice sounding system, hopefully Polk does right by me, sounds like they require original packaging for shipping, but who keeps boxes that big for more than a few weeks? Will update to review Polk customer service.

Update: Polk Customer service is fantastic, absolutely no hassle, nothing to provide (maybe because I registered my product), and had a replacement coming my way in less than 10 minutes. Hook up on the new one was easy, paired with the Subwoofer and Rear Speakers easily. Sounds as great as the first one, hope this one lasts.

JPeters
1.0 out of 5 stars Disappointed
Reviewed in the United States on January 3, 2019
Style: Home Theater SystemVerified Purchase
UPDATE - Polk support is the definition of TERRIBLE. No resolution. Have been promised a replacement for nearly 2 months now, and still nothing.
The potential for this product is there, but the performance experienced to date is poor. The surround speakers (wireless) constantly "chirp" a most annoying sound. Tech support to date has not been supportive, the problem persists.
Until this chirping is resolved, I would avoid these speakers.
Note - I have found on-line others complaining of this same issue, and wish I had found this info prior to purchase.
UPDATE - Customer Service gets only worse - DO NOT BUY THIS - DO NOT BUY POLK. Sad to say

Brad
3.0 out of 5 stars (Was) Very Impressed
Reviewed in the United States on September 11, 2018
Style: Home Theater SystemVerified Purchase
Excellent soundbar, exactly what I wanted. I was looking for something to replace a traditional receiver and 5.1 speaker surround sound system, but was worried a soundbar wouldn't live up to my expectations. This thing is great, I'm not audiophile but I can't tell the different in front sound-stage with 'just' this soundbar compared to the separate Polk Left/Center/Right speakers I had previously. The surround sound are exactly what I wanted, they need a power outlet each and that's it. Some other sound barswith separate rear channels use a single mini amp which is wired to both of them, but the way my room is configured I can't have the rear speakers wired to a single amp. Lastly, as other people have stated, the sub is very impressive as well. For it's size and light weight, I was nervous about how it would sound, but I'm very happy.

UPDATE 5/13: Reduced to three stars. Getting a crackling fire like noise in the front speakers, it's so bad we sometimes watch TV in the other room with a cheap LG soundbar that doesn't have these issues. Also, when changing channels or going into the Comast menu, the soundbar will sometimes (not always) disconnect from the audio source, and then it takes 5-10 seconds to reconnect and play sound once you select a channel.

BlindBoy00
5.0 out of 5 stars Clean Sound!!
Reviewed in the United States on November 30, 2018
Style: Surround Sound BarVerified Purchase
I purchased this sound bar on Thanksgiving. It was a unit that I had my eye on, special buy at $300. It was just too good to pass up.
I had the bar up and running within 40 minutes. The only reason for it taking so long, connected TV, Blu -ray, Apple TV and cable box through my Fire Cube. The additional 3 HDMI ports is a HUGE bonus for a bar at this price range.
The sound is immersive in a medium sized master bedroom. The subwoofer packs quite a punch. Too bad I'm in a townhouse... Otherwise I'd let her really rip.
As a blind individual, I couldn't be happier with the ease of use. The setup and system update was all done through the Google Home App. A total of maybe 5 minutes.
My only issue was learning the remote layout. I really wish manufacturers would place documentation on remote layout in user guides. It would be extremely beneficial to us customers who are blind. Although, Polk customer service explained the buttons on the unit and remote. All within a matter of a few minutes. Very polite gentlemen I spoke with.
The sound bar spans the full width of my 43 inch television. Be prepared! The box is huge and awkwardly shaped. It was a beast to get open. Very well packed.
The bass, lows, mid range are all spectacular in my setup. Voice quality is clear. A definite good buy for a small to medium sized room. I'm considering the surround speakers, but think I may make an enemy of my neighbor. We'll see!
If you are considering this unit... I hands down recommend it. I'm no audiophile, but can discern tones quite easily with my blindness. Overall, a very clean sound.
Read more
26 people found this helpful
Helpful
Comment Report abuse

Jim Gach
4.0 out of 5 stars Expand your Polk Sound Bar system.
Reviewed in the United States on November 23, 2018
Style: Surround SpeakersVerified Purchase
Added these to my Polk Sound Bar and sub woofer and the TV room I show full of sound. Surprisingly good sound from these light in weight speakers.

They connect wirelessly to the Sound Bar but require 110 volt outlet for power.

I wall mounted them on the rear wall about 6 feet high, 6 feet behind the listening area and about 10 feet apart. (I already had wall mounts available. They do not come with wall mounts)

Caveat, the speaker software required an update before they would work properly. This happens automatically when they connect to the Sound Bar provided the Sound bar is connected to the internet.
Read more
20 people found this helpful
Helpful
Comment Report abuse
See all reviews from the United States

Joe R.
1.0 out of 5 stars Good sound, poor usability
Reviewed in Canada on December 1, 2018
Style: Home Theater SystemVerified Purchase
I really wanted to like this product but in the end will be returning it back. The sound quality is good, and it looks nice, but suffers from poor design choices that, to me, render it unusable.

1. Good sound. It's great for watching movies, streaming over Bluetooth or playing games.

2. Easy to setup. Just plug in 4 power cables (the bar, the sub, and 2 satellites), an HDMI or optical cable and it just works.

1. Does not retain volume settings and mode (e.g. Night mode) after entering sleep mode - this is just stupid and a DEAL BREAKER! Paused Netflix at midnight and the sound bar entered sleep mode? When you turn it back on, you need to adjust all volume levels - master, sub, everything - again! And turn the Night Mode on too. The next two problems makes this issue even worse.

2. Poor volume indicator. It is a row of pinpoint LED indicators hidden under dark fabric, so there is not way to tell where the row ends, especially at night. As the result, 25% volume and 50% volume look pretty much the same, making controlling the volume with any kind of precision in advance impossible - unless the sound is already playing.

3. Entering sleep mode erratically. For the life of me I could not figure out the rules when the device falls asleep. Sometimes it does hang on if you pause the sound source, sometimes it turns itself off almost immediately. This further amplifies issue #1.

4. Satellite speakers occasionally making annoying (and loud!) chirping noises, especially when turning the device on, but sometimes just by themselves. Moving them around did not help.

Another issue, not related to product itself: I buy on Amazon for many years but this is the first time this happened to me - I received a previously returned item, despite the description saying "New". The top of sub had two rather visible scratches, there was a return slip in the box and the registration form had a handwritten note saying "Registered on Nov 13" (I purchased the item on Nov 23). The manual was missing too (not a big deal, as you can easily download one). Not cool. I do buy used things on occasion but I would like to be informed about it beforehand with price reflecting the fact.

For returning an item, the only option is to pay for shipping upfront with Amazon refunding later up to $3.99. I expect it will cost me a lot more than that to ship a *very* large and heavy box. Not cool at all.

One star, will not buy again.
Read more
8 people found this helpful
Helpful
Sending feedback...
Thank you for your feedback.
Sorry, we failed to record your vote. Please try again
Report abuse

M. Larocque
1.0 out of 5 stars Buyer Beware!!! Looks beautiful but hardly works.
Reviewed in Canada on December 14, 2018
Style: Home Theater SystemVerified Purchase
I set this up and things seemed fine as the sound quality was awesome. Seemed well worth the price I paid however the connectivity issues on this thing are the deal breaker. Both the subwoofer and the rear speakers click and pop, intermittently, rendering it unusable.

Also disappointed in Amazon based on the return of this unit. They will only credit me up to $3.99 for return costs. Considering the size and weight of the unit I will be losing money on this deal.

Update: the total cost to return this product was $74.18 with an maximum expected return from Amazon of $3.99. Thanks Amazon for having the customer (me) pay $70.00 for the privilege of having a faulty product delivered to my home... Thanks
Read more
6 people found this helpful
Helpful
Sending feedback...
Thank you for your feedback.
Sorry, we failed to record your vote. Please try again
Report abuse

Barry Darlington
1.0 out of 5 stars Popping/Crackling sound coming out of speakers.
Reviewed in Canada on February 13, 2020
Style: Surround SpeakersVerified Purchase
Bought these soakers to go with my Polk Audio Max soundbar. They paired up easy enough, but there is a constant popping/crackling noise coming out of them. I've tried everything to fix it. Not happy with these.
Read more
Helpful
Sending feedback...
Thank you for your feedback.
Sorry, we failed to record your vote. Please try again
Report abuse

Reviewed
5.0 out of 5 stars Excellent Polk sound bar!
Reviewed in Canada on October 24, 2018
Style: Surround Sound BarVerified Purchase
Great sound! Got it for an amazing price! Great all around!
Read more
Helpful
Sending feedback...
Thank you for your feedback.
Sorry, we failed to record your vote. Please try again
Report abuse

See all reviews from the United States
Pages with related products. See and discover other items: Explore soundbars for bedroom, Explore speakers for voice-controlled devices