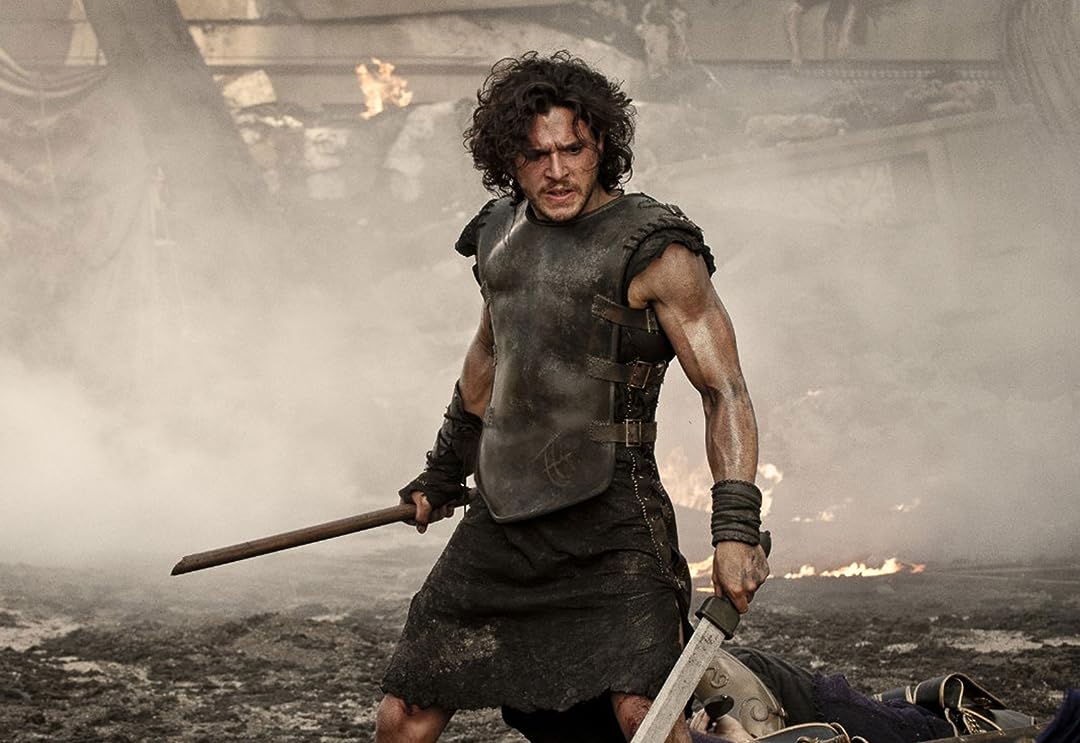 (4,688)
5.51 h 45 min2014X-RayPG-13
Set in 79 A.D., POMPEII tells the epic story of Milo (Kit Harrington), a slave turned invincible gladiator who finds himself in a race against time to save his true love Cassia (Emily Browning), the beautiful daughter of a wealthy merchant who has been unwillingly betrothed to a corrupt Roman Senator (Kiefer Sutherland). As Mount Vesuvius erupts in a torrent of blazing lava, Milo must fight hi..

DorothyZReviewed in the United States on September 16, 2017
4.0 out of 5 stars
Titanic with togas!
Verified purchase
Kit Harrington's abs star in Titanic with togas in what has to be the campiest disaster movie since the Towering Inferno. The script "borrows" liberally from the Conan the Barbarian prologue and an enormous chunk of Gladiator, and as far as the disaster itself goes, there are enough historical inaccuracies to make a college professor throw themself off a bridge. Keifer Sutherland sticks out in this the same way Keanu Reeves stuck out in Bram Stoker's Dracula. All he needed was a mustache to twirl to REALLY complete his over the top villainous Roman Senator. That being said, the costumes and sets were beautiful and Roman Jack and Rose were likable as the leads. Lower your expectations, and have fun watching ancient beautiful people get barbecued. This qualifies as a so bad it's good kind of movie.
49 people found this helpful

NastyBReviewed in the United States on September 21, 2020
4.0 out of 5 stars
This Was Terrible.
Verified purchase
Hardly no plot whatsoever. The "relationship" developed and became "true love" in what seemed like a matter of maybe 14 hours of movie time? It also seemed to rip quite a few pages (of script) straight out of the Gladiator playbook. And the acting = horrendous. The script is an atrocity I legit don't know how this got made, let alone get a budget of 100 million. Once the volcano pops into the script though you kinda get a sense where the film makers blew a majority of that budget which to me is totally fine.

I do like Kit Harrington though, even in movies like this. You can tell he really tried, but ultimately the script failed him. Still, as absolutely horrible as I found this movie just now I'm really glad I watched it. I'm not gonna act like I expected high art - I did not. I wanted to watch some crap get wrecked, and crap certainly got wrecked. And because of that I got what I came for. That love story was bogus though, so minus one star. I straight up would've given this five stars if that love story wasn't so poorly paced, like come on man, have them have known each other before the start of the movie or something so it doesn't seems to forced and sudden.

The Poet MomReviewed in the United States on September 4, 2019
2.0 out of 5 stars
Could have been better!
Verified purchase
If I wanted to watch "Gladiator," I would have rented "Gladiator." Too much of this storyline relied on the brutal Romans vs everyone else plot. The arena fights were unnecessary. That plot line has been used enough already. I wanted a story about the people who lived in Pompeii. I wanted to connect with the families there and witness their trials and triumphs. If a romance was going to be a central part of the movie, it should have been a good one, not this trite crush I just watched. I was so un-invested in these two central characters that I didn't care when they died at the end. Don't know why they had to die anyway along with everyone else. A few of the main characters should have been able to escape the lava. Depressing!
5 people found this helpful

Jocelyn C. SmithReviewed in the United States on July 13, 2020
3.0 out of 5 stars
An Entertaining, Mindless Romp
Verified purchase
Soundtrack elevates this movie from utter mediocrity. The story is a parade of cliches (I hoped early on that Atticus would survive to narrate the story, which would've been a vast improvement) and very little meat on the bone, and the eruption/tsunami scenes are so over the top it's absurd. Cast was fairly good, they just didn't have much substance to work with. Still, for a historical action movie, it's entertaining and you're not invested enough in the characters to care that much when they all croak.
4 people found this helpful

HeatherReviewed in the United States on April 8, 2016
4.0 out of 5 stars
Underrated. Visually stunning.
Verified purchase
When you first start this movie all you can notice is how "bad" the acting seems. I'm not sure if it was the camera angles, the cameras they used, or what but it just seemed off. For the majority of the film Kit Harington seemed like the only one with any real acting skills, but I guess that kinda role was familiar to him. I've always been fascinated by the story of Pompeii and that's what drew me to this film. It surprisingly had a lot of great fairly well-known actors in the cast, but with Keifer Sutherlands background I expected a performance from him that wasn't so "over the top". I do feel the love story was lacking any kind of real background though and I think that made Kit's character a little unbelievable with the lengths he goes to for his love interest. I agree with other reviews that this movie seemed rushed, had it been maybe half hour or more longer it would have provided a more detailed story, I honestly would have been perfectly happy watching a 3 hour story about the destruction of Pompeii. Watch this movie at night with loud volume and good bass and at the end you'll realize you haven't blinked for a while and your mouth is hanging open. The details of the destruction of the city were fairly accurate and visually it was stunning to watch. I think this movie is a great buy and I always enjoy watching it. Solid 4 stars.
13 people found this helpful

horsemeatReviewed in the United States on July 31, 2018
4.0 out of 5 stars
Fun disaster film that meets expectations better than most!
Verified purchase
Had neighbors over for a couples disaster movie night in our 10-seat home theater. All enjoyed the film, but my wife insisted I show it in 2D! Of course, the movie incorporates nearly every modern gladiator stereotype. And Keifer Sutherland does not come across well (almost a parody of villainy), but Kit Harrington holds the center of the film well, the effects are pretty good, and although the historical disaster was quite different from the over-the-top event portrayed here, it's a fun epic. Very nice looking, with great sound. The bigger your screen, the more fun you will have.
6 people found this helpful

Greg A.Reviewed in the United States on May 28, 2014
2.0 out of 5 stars
Mute the dialog and enjoy the destruction.
Verified purchase
I'm not sure how any of these actors signed on to the project with the script they were given to read. The whole plot was a failed attempt at plagarizing every other "forbidden love" scenario ever seen in movies. The destruction was on par with the movie 2012, and really, it was the destruction you rooted for in the end. Oh, and when you get to the part about the chariot racing down the street, ignore the little things like how a 4 horse chariot could miraculously find a completely empty, near-debris-free road, or how it could outrace an earthquake, or even how it could make such a sharp turn that even most cars would flip on their sides to make. Ya...good script there....

Like I mentioned in the title line, just mute the sound, turns the caps off, and enjoy the C.G.I. In the end I rooted for the volcano...and somehow I just don't think that was the feeling I should have been asked to feel. The movie did nothing to honor any of those lost to such a horrific death.

J. B. MillerReviewed in the United States on June 8, 2018
2.0 out of 5 stars
Poor plot
Verified purchase
This movie has some great action but a unbelievable plot. The story is so bad that your hoping the volcano explodes so you dont have to watch anymore of the stupid love story. But it’s to late we had to endure to the end.
4 people found this helpful
See all reviews
Back to top
Get to Know Us
Make Money with Us
Amazon Payment Products
Let Us Help You
EnglishChoose a language for shopping. United StatesChoose a country/region for shopping.
© 1996-2021, Amazon.com, Inc. or its affiliates